When it comes to 160-Speed film, to mee it seems like a bit of an odd duck, 100, 125, are pretty standard, but 160 I’ve only seen colour films rated that way. But enter Silberra Pan160, a touch faster than it’s 100-Speed Cousin, but not as fast as the 200-Speed. It must be a Russian thing moving from the GOST scale. Either way, I like Pan160, probably a little more than Pan100. It’s sharp, but grainy, fantastic contrast, and responds well to contrast filters, especially a pale yellow. And while there’s still plenty of supply issues to us here in North American, and the 120 has not yet come out, if you love something gritty, then this film is certainly worth the wait. 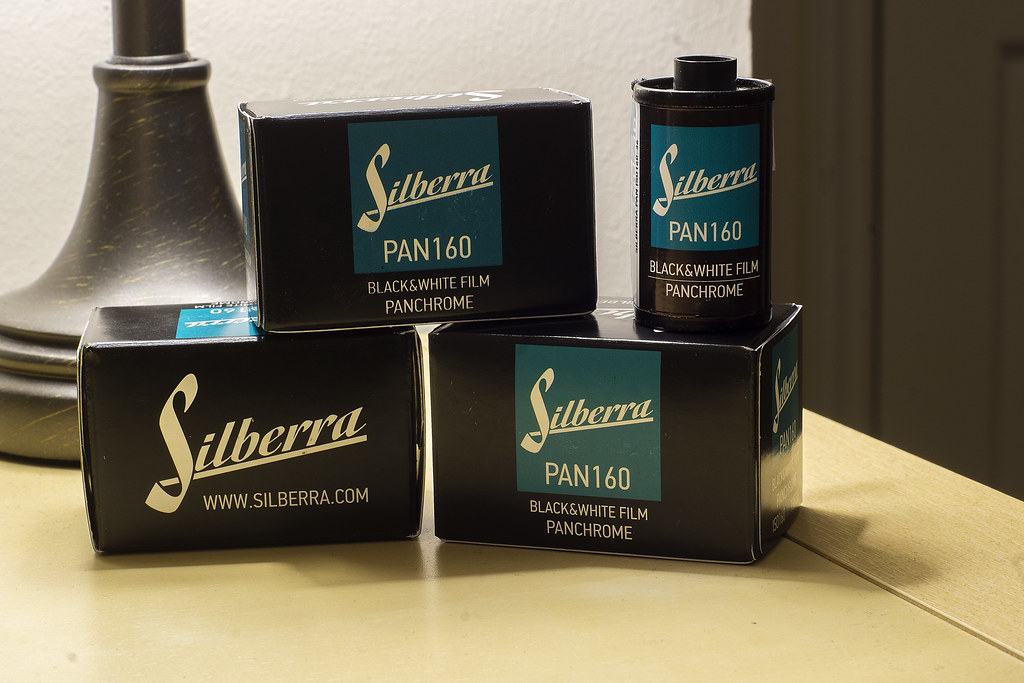 Roll 01 – Kodak D-76
I honestly don’t know where things went sideways. The camera, the Contax G2 I’ve had some issues in the past with settings getting adjust while being put in and out of the camera bag, but there have been no changes to the EV adjustment. The ISO/ASA was set correctly, camera set to Auto (Aperture Priority) and all the shutter speeds looked correct when I was out shooting. When I pulled the film from the tank and onto the scanner, it was way out of whack. I’m also questioning the super long (14 minutes) developing time in D-76 STOCK! Which is crazy because that’s a double jump from the 7 minutes on Silberra Pan100 for an increase of less than a stop (2/3rds?). Anyways, it took a bit of work in photoshop to try and pull an image out of each frame. But here’s the kicker, I’m pleased with the results I have with the film, while the contrast is higher than I’d usually like with a film of this speed and developer, still not bad. The grain is what I’d expect from Pan160, and tones are right on the money for the amount of contrast. So, was it a failure? Maybe? I’d still like to try doing a 1+1 at the same time.

Roll 02 – Kodak HC-110
After seeing several other films using Semi-Stand developing with HC-110, I thought this could be another ‘magic bullet’ treatment for unknown films. And you know, it is. However, it is not my favourite with Pan160. It’s again not a bad choice; it is just not my choice. Again you see a much finer grain, sharp images, and good tone. The contrast is okay, but a little too many shades of grey where there should be whites and blacks. I think this was more on the camera than on the film. I wanted to use a Soviet Camera with a modern film out of Russia and Pan160 I guess got the short end of the stick. So don’t see these as the base-line for Pan160 semi-stand in HC-110, and it would certainly be with a try again!

Roll 03 – Rodinal
All I can say is this is exactly what I was expecting to see, there’s a certain grit to these images, yeah, grain. But it’s a grain that adds a level of dimensionality, beautiful tones, deep black sky, helped along by the Yellow-12 filter. Not to mention the amazing tonality of the film, every layer of grey with deep blacks and clean whites. And while yeah, there’s more grain than you’d expect, it gives you a dead sharp image as a result, so you can’t complain there. There’s nothing fine-grain about Silberra or Rodinal. But I am rather fond of this combination.

Roll 04 – Pyrocat-HD
When it comes to Pyrocat-HD, few films don’t like the developer, and you know, next to Rodinal, Pyrocat-HD is my favourite developer with Pan160. First off, Pan160 is a grainy film, and Pyrocat-HD does a good job in reducing that grain, it doesn’t eliminate it but make it more pleasing. The contrast is dead on, with dark blacks and clean whites, plus an amazing tonal range across the greyscale. And while it is a long developing time (twenty-one minutes), it is well worth the effort. Probably would be best to develop multiple rolls in this way using a two or three roll tank to maximise your effort. And while the Massive Dev Chart does state the film speed at 200, these are shot at 160 and work great. And finally, on printing notes, the negatives take the stain rather well which will make for an amazing printing experience in the darkroom.

Final Thoughts
Honestly, I would have loved a film like this when I was actively shooting in abandoned buildings, the gritty nature of it just asks to shoot some good Urban Decay. Can you imagine locations like RL Hearn, Screw & Bolt, or Firestone? But maybe one of those run-down highway towns along a rural King’s Highway could work as well. I mean, as a film, Silberra Pan160 is very Russian in both it’s look and quality. It might not be the best out there, it might be grainy, but sharp, bulk loaded in salvaged cassettes, but you know what it just works and looks radically different from the modern films we get in the west today. I could see myself purchasing this film if it gets to some North American distributors, once Silberra has their ducks in a row. Currently, this film is only available from European and Russian distributors.