When I first was introduced to the Rollei RPX line of films, I referred to them as the spiritual successors of the iconic APX line of films from Agfa. I still stand by the statement but also know that the RPX line of the film is not related directly to the APX line of films. Besides holding the same three speeds and having “PX” in the name, these are two different films. But in the sense of fun and showing off the differences, I’ve decided to pit the two ASA-25 films against each other in a fun little head-to-head to show where they are similar and wildly different. To help show these differences, I went out with both films loaded into a pair of cameras, the Minolta Maxxum 9 and Nikon F5, each with a 50mm f/1.4 lens. To help keep things as level as possible, I ran at aperture priority and matched the apertures on each camera. I am taking the same image each time and developing it using Adox FX-39II. Scanning was done with a Nikon Coolscan V ED using the Nikon Scan 4 software and edited with Adobe Photoshop CC. In the comparison images, the APX 25 image is on the left, while the RPX 25 image is on the right. 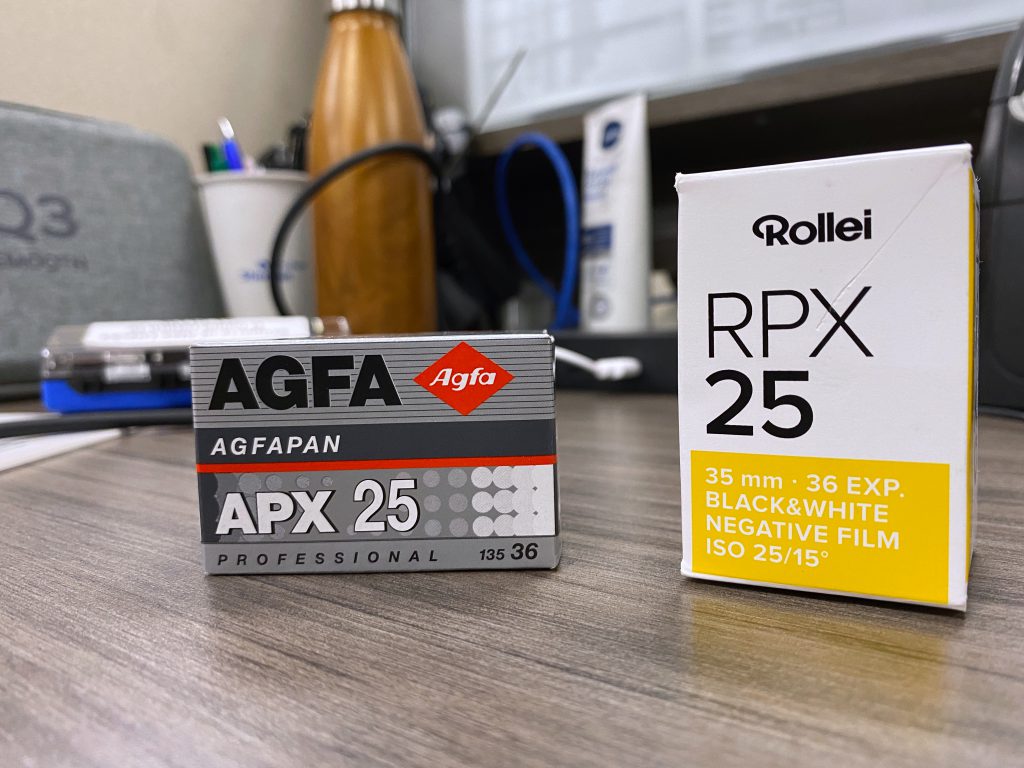 Image Quality
Suppose there is one thing that both films have superb image quality. And here, the two films are about equal, having fine grain and excellent edge sharpness. And I’ve seen that in multiple developers. Both films do well in Rodinal, although there is a difference in visible grain, with APX having more than RPX in that case. But in your general purpose developers like FX-39II, ID-11, and Ilfotec HC, the results are uniform between the two film stocks. The most significant difference in image quality is in contrast and tonal range. APX wins out hands down in this category as it has a much smoother tonality and middle contrast. RPX is a much higher contrast film, but there’s no surprise there, given that it is an emulsion based on a surveillance film.

Sensitivity
The most significant difference between these two film stocks is the spectral sensitivity. And that is seen when you read the spectral sensitivity charts off the datasheets. To help you out, I’ve included these charts below. As you can see on the APX 25 chart, the sensitivity drops to nothing once you get past the 650nm range, while on RPX 25, it’s not until you hit the 750nm range that your sensitivity drops to nothing. But what does that mean to the average photographer? Well, as you can see in these images when you get to red items like the stop sign, the reds on the RPX 25 are much brighter than when captured on APX 25. It also helps with blue sky rendering and cloud separation. But it also determines how the film responds to the contrast filter. You will get a more robust reaction with less filtration on RPX 25 than on APX 25. So, where you use a pale yellow filter on RPX 25, you’ll want a deep yellow filter on APX 25.

Scanning & Post Processing
The two films are also different here, especially in our modern hybrid world. When scanning, RPX 25 is a clear winner; the thin PET base allows the film to dry flat in almost all conditions, making it far easier to load the film into the traditional holders of flatbed scanners. The problem is that my Coolscan V does have some trouble with these thin films. While RPX 25 isn’t the most delicate film I’ve worked with, it can be tricking in the Coolscan. Also, because of the higher contrast, RPX can be a bit of a bear to process and get a reasonable hit rate on your rolls. APX 25, on the other hand, has a thicker base and a greater chance to cup while air drying, making it more challenging to load into holders with a flatbed scanner and requires a more extended drying period and often a tight back roll to give it time to flatten. Of course, this can be addressed by using a dedicated film drying cabinet. My Coolscan V handled the film far easier ‘locking on’ almost immediately without loading the film backwards. Also, running through Photoshop APX is a much nicer film to work with, with the scanning software getting the shots to almost 90% ready for posting.

Final Thoughts
Both these films’ stocks are excellent. Even in its expired state, APX 25 still stands the test of time because slower black & white films take the rigours of age much better than faster options. Especially if the films are well stored. The roll I shot for this post came from a professional’s freezer. So I knew they were well kept, and having tested the batch, I knew I could shoot these at box speed. Of course, even rolls that I haven’t been sure of, I’ve shot at box speed and gotten excellent results. RPX 25 is a fantastic modern emulsion that is fun to shoot in the summer and is relatively versatile. And you can lean into the extended sensitivity to the reds by applying IR filters and even reverse processing them in Adox Scala developer. And while it certainly is not a direct replacement, it remains a spiritual successor. If you are looking for something closer, maybe try over-exposing and pull processing Ilford Pan F+, but that’s a subject for another post.