The late 1990s and early 2000s were exciting times for photography. You had the APS system trying to take over the consumer market while digital cameras were starting to become everyday use by professionals and consumers. It was a hybrid era with film scans becoming normal when you take your film to the lab, and you got a CD-ROM with your prints and negatives. And yet, there was still a need and a desire for consumer-level SLRs. Earlier in the year, I started getting some of these cameras; they’re dirt cheap on the used market, offer up plenty of good features for what they are, and they can use the lenses I already have. So today, I’m pitting the three cameras in that class, the Canon EOS 3000, the Nikon F65, and the Minolta Maxxum 70, against each other in a fun competition. Not to see which one is better but to know where each manufacturer excelled in this market segment. 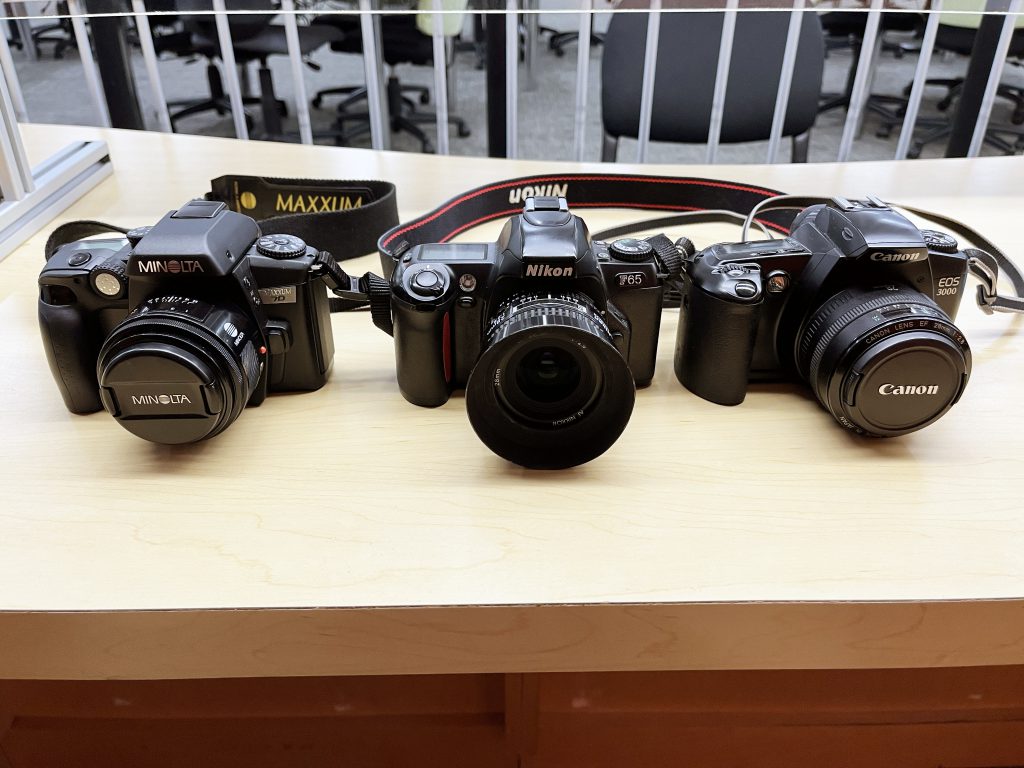 The Contenders
The three cameras that will be up against each other today are the Minolta Maxxum 70, the Canon EOS 3000 and the Nikon F65. These cameras were aimed at the entry-level market in the mid-tier region and were produced in the last decade that film cameras were being made, from 1999 to 2006. The oldest of the three is the Canon EOS 3000; first introduced in 1999, it marked the first entry-level SLR from Canon to include full PSAM controls. The Nikon F65 came in 2001 as an improved spec model over the F60 but only saw production for a short period before the entry-level was split into two models. The Maxxum 70 is the youngest; first coming out in 2004, it marked the mid-level of the entry-level line. It included many of the features of the Maxxum 5 and some elements of the higher-spec Maxxum 7. Each camera will be equipped with a 28mm f/2.8 lens. I have one for each system, which is approximately equal in optical construction and specifications. For this review, I’ll use the same film stock in each camera, Kentmere, and develop them all in a single tank using 510-Pyro. I will be able to tell them apart by using a control image of the lens cap for each system. The comparison images will be arranged as such: on the left is the Canon EOS 3000, in the middle is the Nikon F65, and on the right is the Minolta Maxxum 70.

Camera Look & Feel
Any entry-level SLR has to balance weight with functionality, and all three cameras are not exactly heavy compared to other cameras I have in my toolkit. But weight isn’t everything, and sometimes a light camera isn’t always the most sturdy. And then you have to go with how the camera feels and the layout of the control, the ergonomics. Some of these things are highly subjective, and I strongly view camera ergonomics. The Canon EOS 3000 is the lightest camera; even with the lens, it feels much lighter than the F65, which is the heaviest. But the 3000 feels the flimsiest, as if even a tiny drop will do irreparable damage to the camera. The F65 feels like a tank, but Nikon has consistently applied the same quality build between their consumer and professional cameras since the age of the Nikkormat. The Maxxum 70 does a good job balancing weight and build quality with an all-metal exterior shell, compared to the plastic of the 3000. But the Maxxum 70 does have a few more buttons and dials than the other two, it also is relatively blocky, and unless you’re used to that design choice, it might be a bit of a put-off. The 3000 and the F65 focus on a single control dial and command dial for adjusting functions and settings; the Maxxum 70 takes several steps for some locations. And between the 3000 and F65, both are on equal grounds, with similar control and design layout; it only comes down to personal taste; the 3000 is suitable for folks who prefer and smaller and lighter camera, while the F65 is for those who like a beefy camera. But the squat blocky appearance of the Maxxum 70 wins the day for the sheer cool factor.

Camera Experience
Regarding the experience among these three cameras, each offers solid usability and, when set to full program and autofocus, is fairly similar at face value. Each camera is around the same weight, so with even the stock OEM strap, they don’t add too much weight to your camera bag or around the neck. Even lugging three of them around was not much of a chore, but I wouldn’t do this regularly. Of course, weight and balance are also affected by lens choice, and some big heavy lenses are available for all three systems. But with a prime lens, they can easily manoeuvre in the field. Each has a viewfinder that offers up plenty of information for the photographer, and the amount and type of data are equal across all three cameras. All don’t offer 100% coverage, but the F65 and Maxxum 70 provide a large bright image, while the EOS 3000 seemed dim and had the most cropping. Autofocus is a clear difference between all three cameras, the worst of the lot is the Maxxum 70; it often took several tries to get the camera to lock on. It is almost as if the camera was trying too hard to get the best focus. The F65 is much more accurate but is set to lock onto a single focus point at a time, but the focus motor is loud and slow. The clear winner here is the EOS 3000; the autofocus is accurate, fast and nearly silent. What is more impressive is that this is the oldest camera in the group. The F65 is, besides the autofocus, a relatively silent camera; the shutter and film advance motor is subtle compared to the EOS 3000, which is pretty quiet, but what kills it is the film advance. The loudest is the Maxxum 70, which makes no effort to be quiet. Now the one place where the Maxxum 70 and EOS 3000 have over the F65 is the ability to set the film speed, making over manually and under-exposing film in the field a lot easier. The F65 relies solely on a DX code on the film canister, which also puts a lot of black & white films I enjoy using out of reach of the camera. When it comes to exposure, all three are on equal standing. All three use an averaging metering system, with the F65 and EOS 3000 using a six-segment meter while the Maxxum 70 goes full on fourteen! And you may think the 70 would have superior metering, but that is not the case. For metering, I give the F65 the passing grade; it opens up the shadows a lot more than the other two cameras and is far more consistent. I also gave the cameras a real test with a lot of mixed light; even in that mixed light, the F65 provided better exposures than the other two. Now, what sets the Maxxum 70 apart is that it has a better capacity for customization and has one feature that the other two don’t, being able to select the rewind to leave the leader out of the canister. A minor part for most, but one that I find helpful for loading film onto reels for development.

Optics
If you came to this section to see which lens is best, you would not find it here. I find that the optical quality of all three companies is on par with each other, and you have to dig rather deep to find differences. Instead, I’m going to look at the versatility and affordability of the lenses. Each camera uses a mount that continues today and is on the professional brethren of these entry-level cameras. And each mount is still in use on digital cameras today. The Minolta A-Mount, first introduced in 1985, continued to be used on modern Sony cameras and remained almost unchanged, but now has lenses with faster motors. The Canon EF mount was introduced in 1987 with the EOS 650 and has remained unchanged since, but it also has introduced lenses with faster motors but remains compatible. And the oldest of this trio of the Nikon F-Mount, which was introduced in 1959 but has undergone a lot of changes since then, the F-Mount of the F65 is closer to the AI(-S) mount first introduced in 1977 but now has a tonne more features such as autofocus. Let’s start with the F-Mount; you would assume that, given the long time frame, the F65 will have a large selection of lenses that will work, which would be incorrect. First, you can eliminate all the pre-ai lenses, as there is no support, and it will damage the mount. The F65 also cannot meter with a manual focus lens (AI, AI-S or Series E) attached. You can easily use AF, Type-D and Type-G lenses; even AF-S lenses will work. But as these lenses are still in use and often sought after, they are pricey on the used market. You can get deals on original AF lenses if you know where to look. The Maxxum 70 uses the same Minolta A-Mount as the original Maxxum 7000, but even the A-Mount and lenses have changed. And that’s what sets the Maxxum 70 apart from even my Maxxum 9; the 70 can accept the new lenses that use an SSM lens for fast autofocus, plus every other A-Mount lens in Minolta’s catalogue and even Sony’s. Plus, with the recent announcement of Sony discontinuing production of A-Mount glass, the A-Mount is a surprisingly affordable system for the most part. But the clear winner is the EOS 3000; the EF-Mount has remained fairly unchanged since its inception, there are lenses with faster motors, but the EOS 3000 can use all the lenses in the EF system without trouble, even L-Glass. The downside is that the EF-Mount is still being produced and used by high-end digital SLRs, so the price, even on the used market, can be expensive, but some deals can be had, and you can even get new-in-box lenses for the 3000.

The Lowdown
All three cameras have strengths and weaknesses and are solid performers, offering an excellent entry-level experience. However, even those who enjoy the higher-spec cameras can be a breath of fresh air and provide compact options. It all comes down to personal preference and what lenses you have in your tool kit. As someone who primarily shoots Minolta and Nikon, I lean towards the Maxxum 70 and F65; even with a smaller EF kit, the 3000 will make an excellent take-along camera when space is limited. I might even consider it when my family returns to Disney. It offers no-nonsense, fast, silent autofocus operation that will play into any camera kit as the little guy ages. And while I never go into these with the expectation of declaring a clear victor, below is a list of areas I discussed and the camera I feel won in that category.

On the price side, the cameras are all relatively in the same price range, with most cameras coming with a kit lens or some third-party option on eBay. But for body only, these are running from 45-90 dollars, with some outliers on both the high and low end of the range. The one thing to watch out for is, of course, operations, these cameras are difficult to repair, and many camera shops won’t bother touching them. But you can pick up a replacement body without too much injury to the bank account. And I recommend buying the Maxxum 70 and F65; the EOS 3000, you should go with one of the newer models, 3000N and 3000V, as they are younger and have slightly improved specs. And if the F65 isn’t what you want, try the F75 (not the F55).