I was always iffy about shooting 620 cameras, since when I first got into film photography finding 620 film was difficult, but the cameras were everywhere and many found their way into my collection. And to make matters worse the take up spool was missing. But let’s back up a bit and discuss, exactly what is 620 film? It was a film that was first introduced by Kodak in 1932 and continued being produced until 1995. But here’s a secret, it’s the exact same film stock as 120, same size and same backing paper, but it was the spool that was different. So if you have some 620 spools laying around you could re-roll the film from one spool to the other in a darkbox or bag. I tried, and failed. But then, recently something happened, the fine folks at the Film Photography Project managed to get new, that’s right, new 620 spools manufactured, mold injected plastic spools that works as good as the original metal ones. So naturally I went and found myself a 620 camera. 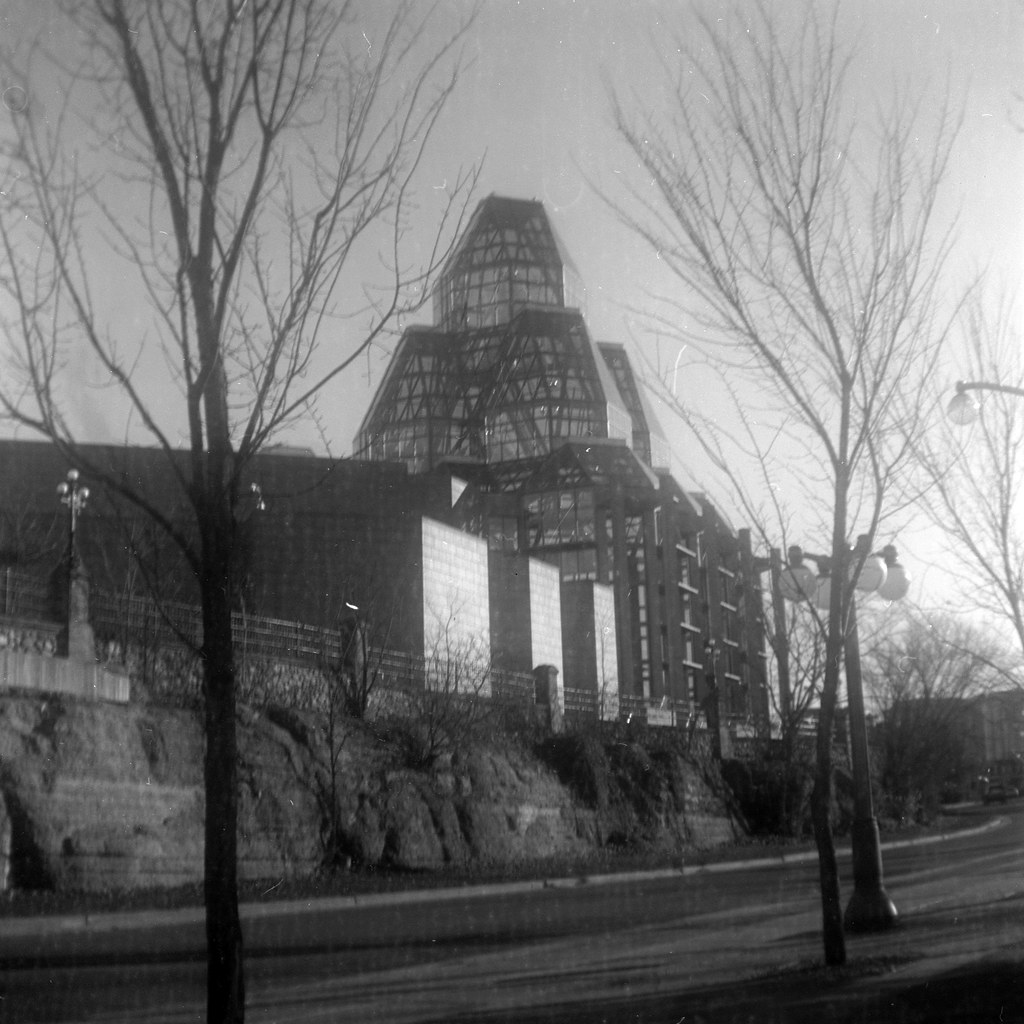 Back in September on my way to Ottawa I took the scenic route along King’s Highway 7, stopping on the way in Peterborough at an antique store just outside the city, and found in mint condition, I seriously think this camera only had one roll of film run through it, Kodak Hawkeye Flash. The Hawkeye Flash was manufactured from 1950 to 1961, a basic Bakelite construction box camera with a single-element 81mm f/15 lens with a fixed shutter speed between 1/30″ and 1/60″. And it came with a take up spool, but that wouldn’t have matter as I had a stash of these spools in my camera gear. But the one neat thing about the Hawkeye Flash is that you can use a 120 spool (but just not on the take up side). The body being light-tight, I now had a camera I could use to re-roll 120 to 620. So when I returned to Ottawa, I checked the weather, and used the camera to roll some Ilford Pan F from 120 to 620, then back onto a 620 spool for use. 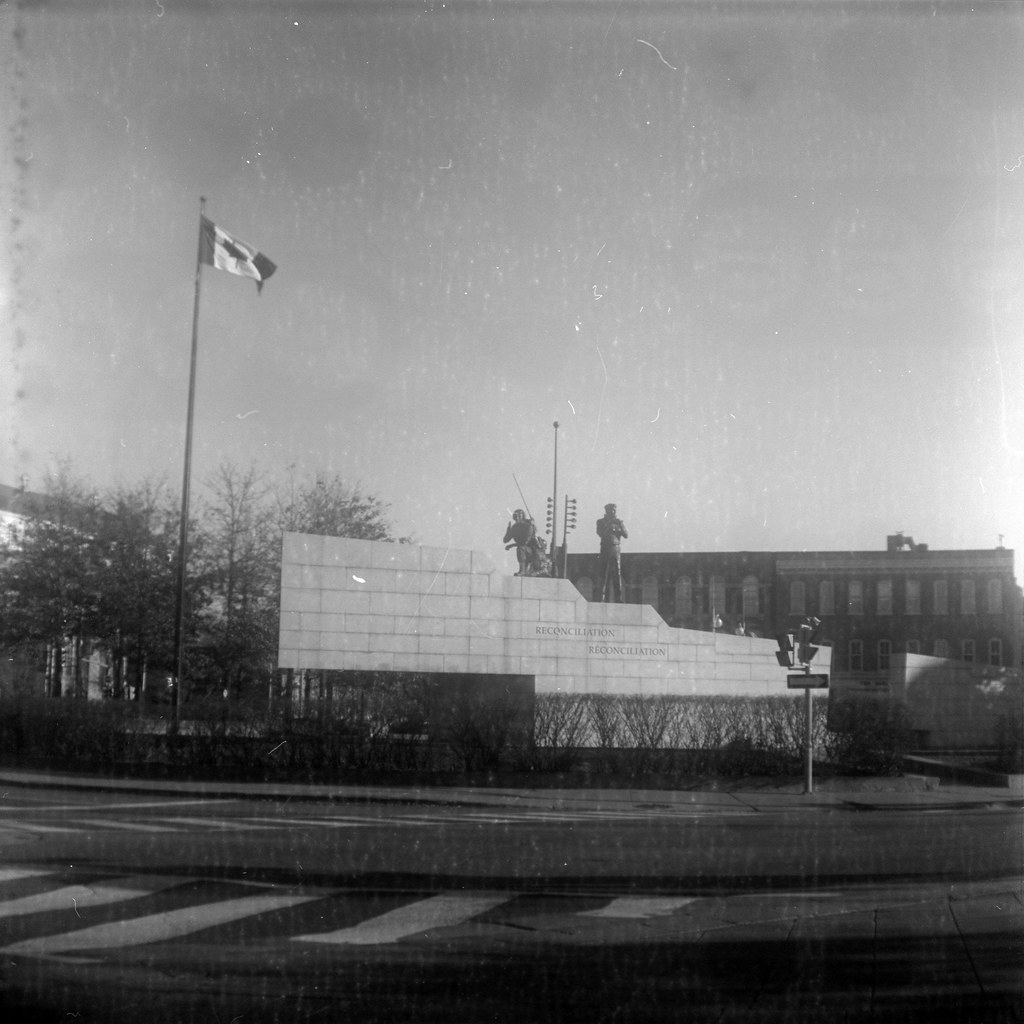 These old Kodak cameras always surprise me, sure the images have a soft almost dreamy look about them, very 1950s. But still there’s some sharpness to them. It’s weird looking at the images with modern cars and flags and such in them, especially the Canadian Maple Leaf flag, I was half joking to myself saying, maybe it’ll change the flag to the red-ensign. But there’s something oddly drawing to these images. 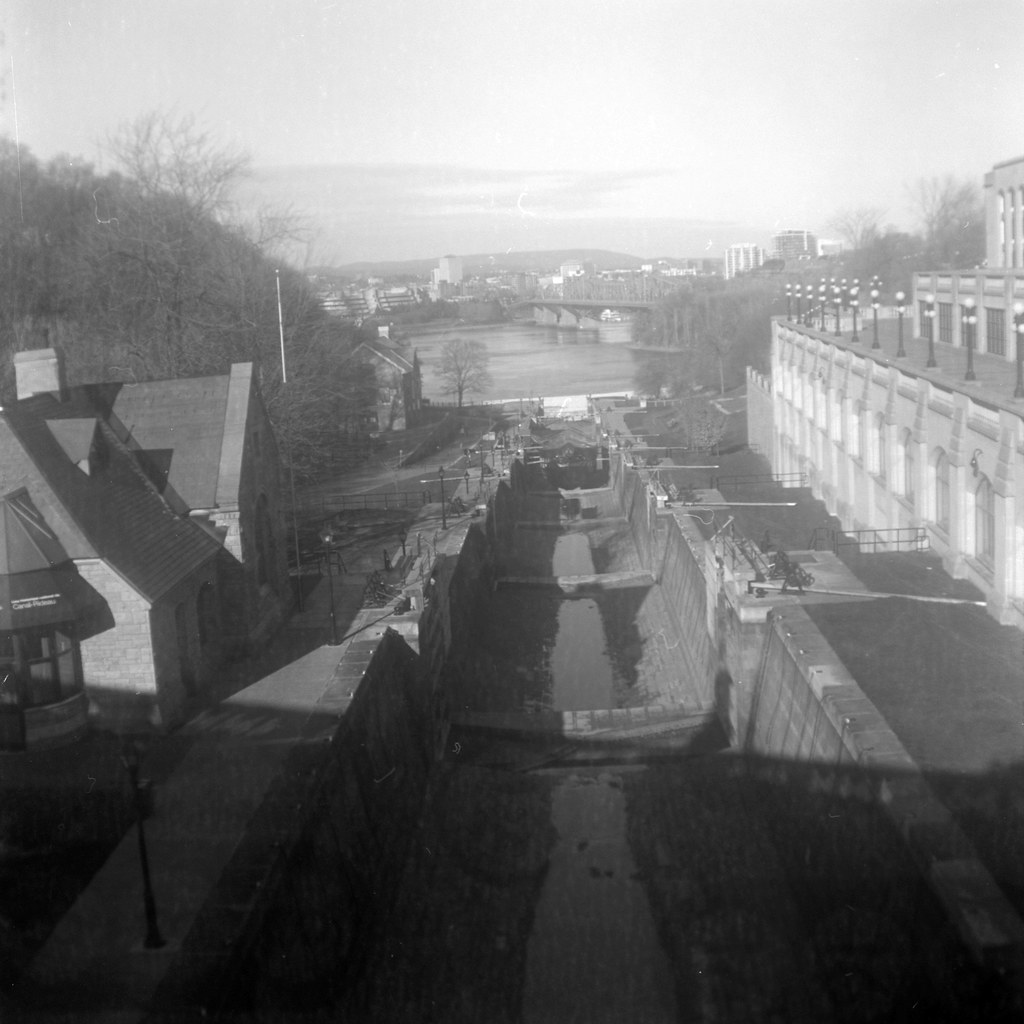 Maybe it’s just the photographer in me, wanting to get away from the sharp crisp images I get out of my 4×5 and other medium format cameras like my Pentax 645 and Rolleiflex 2.8F TLR. This is something different. I don’t have to think about shutter speed, aperture, depth of field. As the old slogan for Kodak says, You Push the Button, We do the rest. It’s simplistic, and that often is needed. 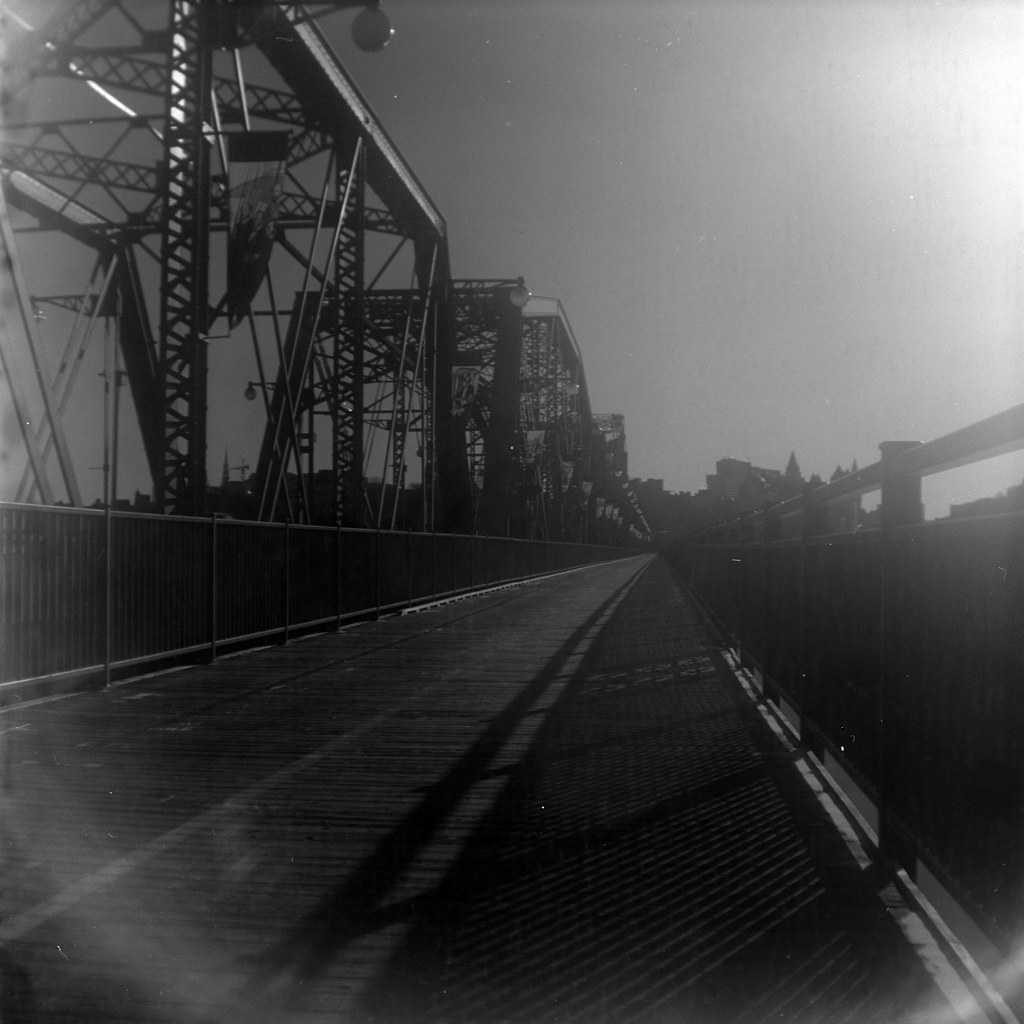 But the best was when I was leaving my hotel, another guest noticed the camera and said “I had one of those! I still have it, shame you can’t get the film anymore” I smiled and replied “But you can, here.” I scribble down the FFP’s site, tore the page from my trusty notebook and gave it to him. Made his day. Have an old, working 620 camera? Want to get it out and about again, head on over to the FPP store for the world’s largest selection of fresh 620 film, need a take up spool? They got those to!