I’m not often excited about a colour film hitting the market. As someone who primarily shoots B&W, another colour stock isn’t much to get excited about. But as a part of the film community, I know that getting your hands on fresh colour film has been difficult for the past several months. So when CineStill dropped the news of a new colour film stock, I was excited for all my fellow photographers who gobble the stuff up. Plus, I always like to expand my horizons regarding photography. And CineStill has done so much good for the community by sourcing and modifying film stocks, releasing easy-to-work chemistry kits and generally being awesome people. There’s plenty of speculation on the base film stock from Eastman-Kodak; there is no official word from CineStill on what this film is based on. Some folks have said under-exposed 250D; others suggest a new 500D film stock. What is going to make this review interesting is that I’ll be developing most of the rolls through Burlington Camera using the C-41 process, with two rolls being developed at home using the FPP Super Color Negative ECN-2 kit. So what’s the difference? The developers are different; the ECN-2 kit uses a CD-3 developer (closer to what is used for RA-4 or E-6 processing), while C-41 is a CD-4 developer. Also, the ECN-2 home process is not a full ECN-2 process as laid out by Eastman-Kodak, which is designed for use in a mechanised lab environment with specific targets and tolerances. 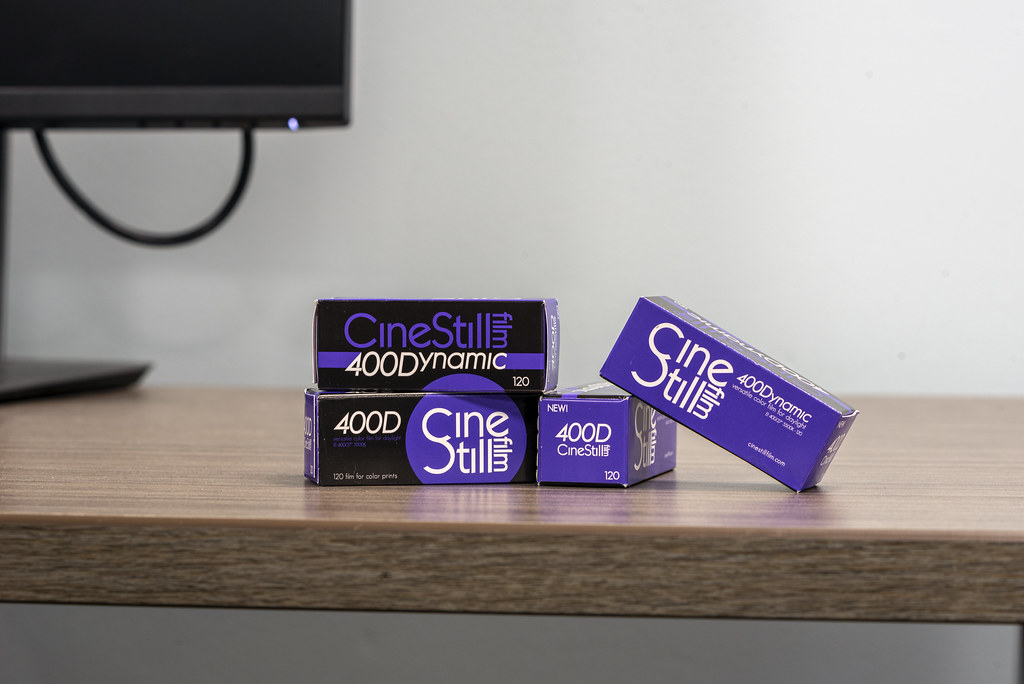 Colour Rendition
Here is where 400D shines; this film is a blank slate. Think of it like a RAW file straight out of your digital camera; you have a lot of latitude to adjust the film to your own taste. And there is much room for adjustments in contrast and levels to your taste with little deterioration of the image quality. When you scan the film, you get a flat image, dull, missing a bit of punch. But this is where the film shines; you can punch up that contrast and adjust your colour balance and grading to give you the exact results you’re looking for. This film stock gives you the colour you want because you can choose how to adjust the colour; even in the regular C-41 process, you get that same flat contrast. This flat contrast only increased when I processed two rolls in the FPP Home ECN-2 Kit, but it improved the overall colour replication despite being a cross-process. You can make the colours pop while photographing fall colours, mute the tones, and cool things down indoors. The possibilities are endless, and 400D takes it all and makes it look good. Or you can make everything look natural, adjusting for the type of light you have on your subject.

Image Quality
I honestly have nothing bad to say about the image quality of 400D. The images are sharp, with excellent grain structure and an amazing range at which you can torment this film stock. The film performed amazingly, sharply, with almost no grain at box speed. The dynamic range of this film certainly showed up well with under-exposure; it handled both a one-stop and two-stop without any loss of quality, decrease in sharpness or increase in visible grain. I also found that the image quality is excellent in the FPP Super Color Negative ECN-2 kit. The film also handled a one-stop over-exposure without difficulty and almost no real adjustments in post-processing. It also produced amazing Colour replication and contrast are easily controlled and adjusted, and the film did well under daylight, fluorescence and LED lighting conditions. I didn’t have a chance to try under tungsten lights, but given how well you can adjust everything, you won’t need too much on-lens filtration. I can see 400D working well with a pro-mist filter; you can probably pop on a one or 2-stop filter and produce amazing results from the film.

Scanning
I don’t like scanning colour film, and 400D certainly kept me on my toes. As I mentioned in the first paragraph on colour reproduction, the files from the scanner offer a flat image and a blue shift to the image. Silverfast struggled to scan 400D but got quality scans from the negatives. But I struggled to adjust things in Photoshop; the automatic tools did not do well with this film. The first roll I scanned was shot on Thanksgiving Monday (2022) at Mount Nemo, with a tonne of brilliant fall colours, so I looked back at the digital images I shot that day and started to play from there around with the manual adjustments. Levels using the eye-dropper tools, then colour balance. From there, I built a better understanding, got into a groove, and pulled out brilliant images from the scan. With the Cross Processed rolls, I found that they scanned even better than the C-41 rolls, with colour balancing and grading much easier and faster, even in Adobe Photoshop, which made me very happy. The best part is that the scanned files were clean, with no colour noise, which surprised me. CineStill 400D is a film designed for a hybrid workflow, analogue capture, and digital post-production.

Overall Impression
CineStill has got themselves a winning film stock in 400D, and making it readily available will certainly help reign in demand for colour film. And what makes 400D a solid option because you can torment this film, and it will always deliver. You do have to be a bit more mindful when scanning the film, and I honestly feel unless you like that flat, dull look, this is not a film to post straight out of the scanning, especially if you’re scanning at home. And sure, 400D is not cheap; it is pricey but not too over the top compared to the cost of films like Ektar 100 and Portra 400. I like 400D, and if I need to do anything with colour film in the future, I will keep 400D at the top of my list, especially with it available in 35mm, 120 and 4×5. Now the one thing CineStill tried was to get it available in 220; I honestly would not hold my breath. 220 film is not easily done; making the film in 220 lengths is the easy part, but backward engineering the adhesive tape to hold the leader and tail onto the film stock is the real challenge. But in the film photography community, the impossible is nothing more than a challenge. I don’t often get excited about colour films, but 400D excites me.