Project:1812 – The Battle of Chippawa

The Battle of Chippawa is unique among the engagements during the Anglo-American War of 1812 as it was the only one to feature a full proper European style engagement on both sides of the field. Line infantry tactics did not lend themselves well to the rough terrain of North America, so most engagements were a mixture of both skirmishing and line tactics dictated by the terrain. But Chippawa would go down as the only full-scale European-style battle of the entire war. 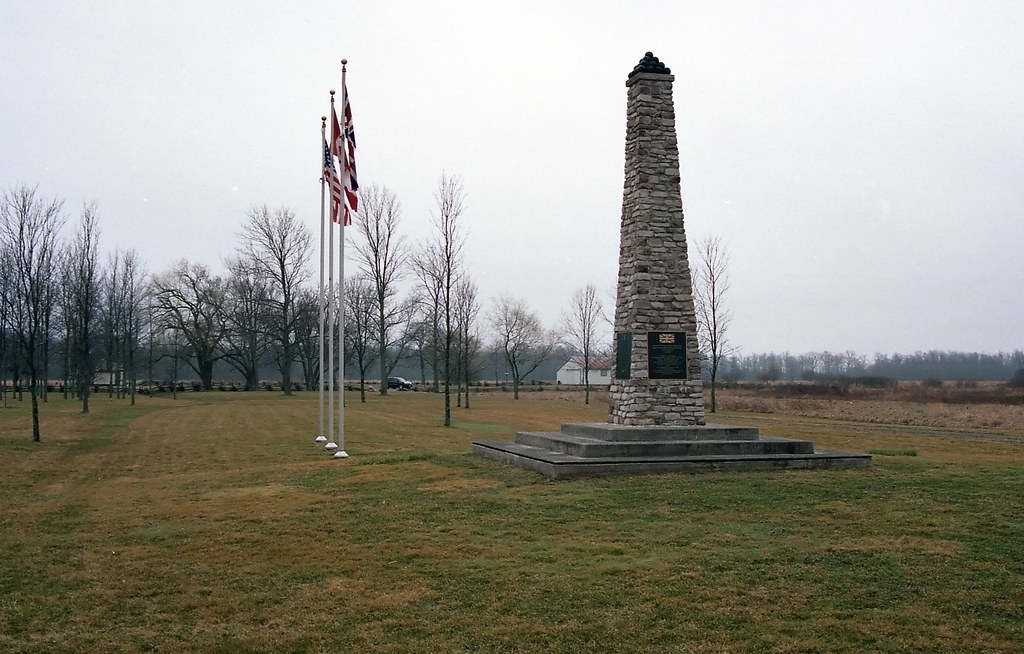 The memorial to the Battle of Chippawa as in stands on the maintained section of the Battlefield.
Canon EOS A2 – Canon EF 35-105mm 1:3.5-4.5 – Kodak Portra 400 – Processing By: Old School Photo Lab

By the 3rd of July 1814, the third and final invasion of Upper Canada had gotten under way. A massive army under the command of General Jacob Brown and General Winfield Scott had landed and forced the surrender of the British garrison guarding the still under construction Fort Erie. But unlike the previous year’s spring invasion Brown and Scott were not going to make the same mistake by securing their beachhead. Brown sent Scott’s division forward that same day ordering them to advance as far as Street’s Creek and hold there. When Riall learned of the surrender of the Fort Erie Garrison, he ordered the garrison commander, Major Buck to hold at the village of Chippawa as he advanced his force forward. 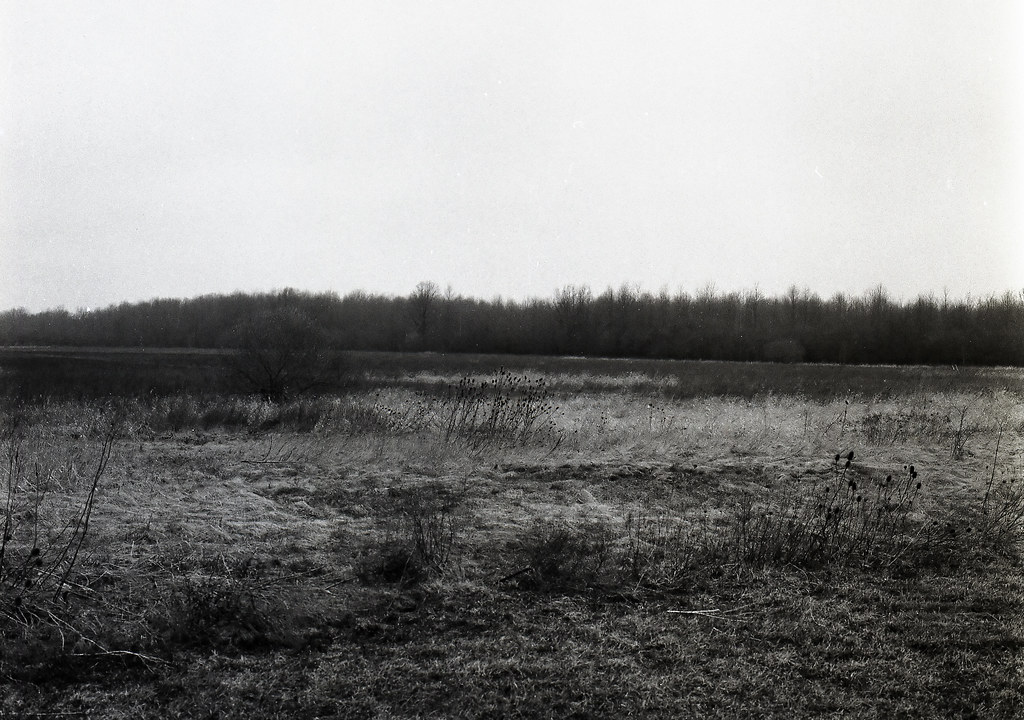 The Chippawa Battlefield is one of the only War of 1812 battlefield in Canada to remain fairly untouched.
Pentax 645 – SMC Pentax A 645 75mm 1:2.8 – Ilford HP5+ – Processing By: Old School Photolab

Riall planned to test the American resolve and ordered forward a group of Native and Militia troops. The skirmishers were enough to rattle the light division of General Ripley sending them back towards Scott’s main line and just in time to witness the arrival of General Brown’s division much to Ripley’s disappointment. It was playing out exactly how Brown and Scott wanted. They had hoped to meet the British in a pitched traditional battle, and Riall was marching right into that play. The dust kicked up by Riall’s army alerted the Americans to the British presence, and they began to line up and meet the regulars. Legend has it that upon Riall’s view of Scott’s division he scoffed noting the gray coats. He was confident that his regulars were facing nothing more than a group of militia. And like many militia units on both sides of the war, they had a tendency to cut and run in the face of well training regular troops. But Riall did not realize that this was not a militia army, but rather a group of regular US Infantry trained under the watchful eye of Brown and Scott. The trouble was that there had been no time to dye the gray wool the regular blue. 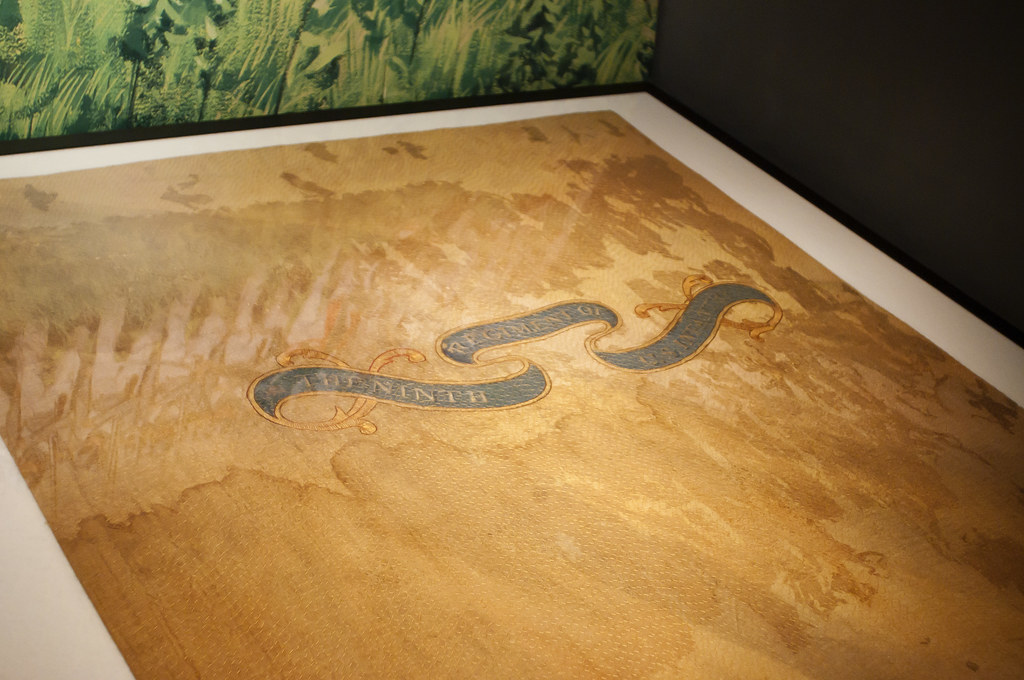 The Regimental Colours of the 9th US Infantry that they carried during the battle, now displayed at the Westpoint Academy Museum.
Nikon D300 – Nikon Series E 28mm 1:2.8

The chilling fact was that these were no ordinary regular American infantry either. Training under Brown and Scott had molded them into an effective fighting force. Gone were the days when even American regulars would run in the face of the British regulars. Each side stood toe-to-toe trading deadly and efficient volley fire against the other. The American artillery took its toll as well blasting Riall’s army with shot and shell. As the bloodletting continued, Scott began to advance his gray coated 9th US Infantry but in a curious manner. While the center of his line held back, the two flanks moved up faster. Through this maneuver Scott began to outflank Riall’s army, knowing he was defeated ordered the 1st (Royal Scots) and 100th Regiments to fall back covered by 8th (King’s) back to the fortified lines at Chippawa. But the advance of the Americans pushed Riall further back eventually barricading the army at Fort George while Brown’s army again captured Queenston Heights. 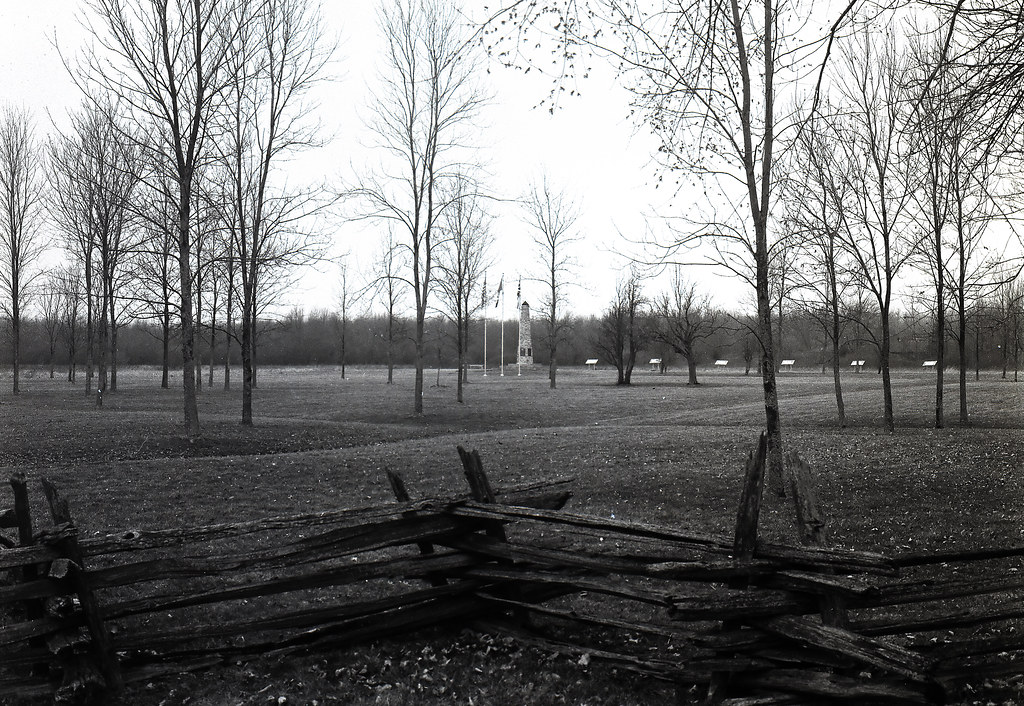 Looking out at the memorial from the Niagara Parkway, a series of self-guided signs walks you through the battle.
Pentax 645 – SMC Pentax A 645 75mm 1:2.8 – Ilford HP5+ – Processing By: Old School Photolab

Today the Chippawa Battlefield is one of the few left in Canada from the Anglo-American War of 1812 that remains fairly intact against the urbanization of the province over the past 200 years. While much of it remains a wild and rough area, the site was a former farm field, and you can still see the old plow lines. There is a visitor’s area with a memorial cairn built from stones of Fort Erie, Fort George, and Fort Niagara as well as a self-guided tour with interpretive signs.