She is the stuff of legends, a hero in her own right, a hull of iron, and undefeated in battle. A mighty sailing ship that spans the course of three centuries, and still able to move under her own power, she’s called Old Ironsides, but her real name is the US Frigate Constitution (38). And while the history of the Constution extends both before and long after the Anglo-American War of 1812. And while the ship is not a fort, person, battle, or location, it played a major role in the war and adds to the overall mythos that has surrounded the war in these past 200 years. 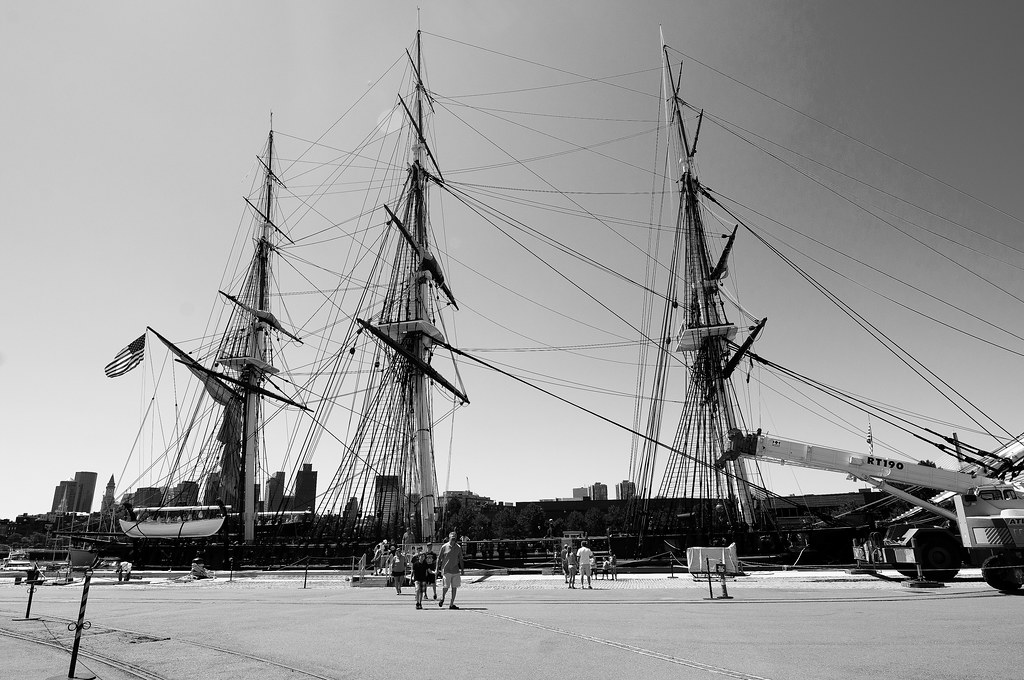 By 1793 Piracy against American shipping interests had come to a head, eleven ships had been seized, their crew and cargo held for ransom by the Barbery Pirates. To combat this thread the Federal Government, still wary of any standing military force, authorized the construction of six frigates under the terms of the Naval Act of 1794. These new heavy frigates were designed to be faster than the heavy ships of the line, and outgun any existing frigates on the high-seas. The keel of the Constitution was laid down on November 1st, 1794 in Boston. But peace was reached with the Pirates and Algiers in 1796 and under the terms of the Naval Act, constructions of the frigates were to cease. But President Washington seeing the value of these ships, and three nearly completed debated and funding continued for the three nearly completed ships. By the end of the 18th century, the United States Navy commissioned three new Frigates. The Constitution, the US Frigate United States (24), and the US Frigate Constellation (38), the Constitution being commissioned on September 20th, 1797, and took to the water on October 21st of the same year. 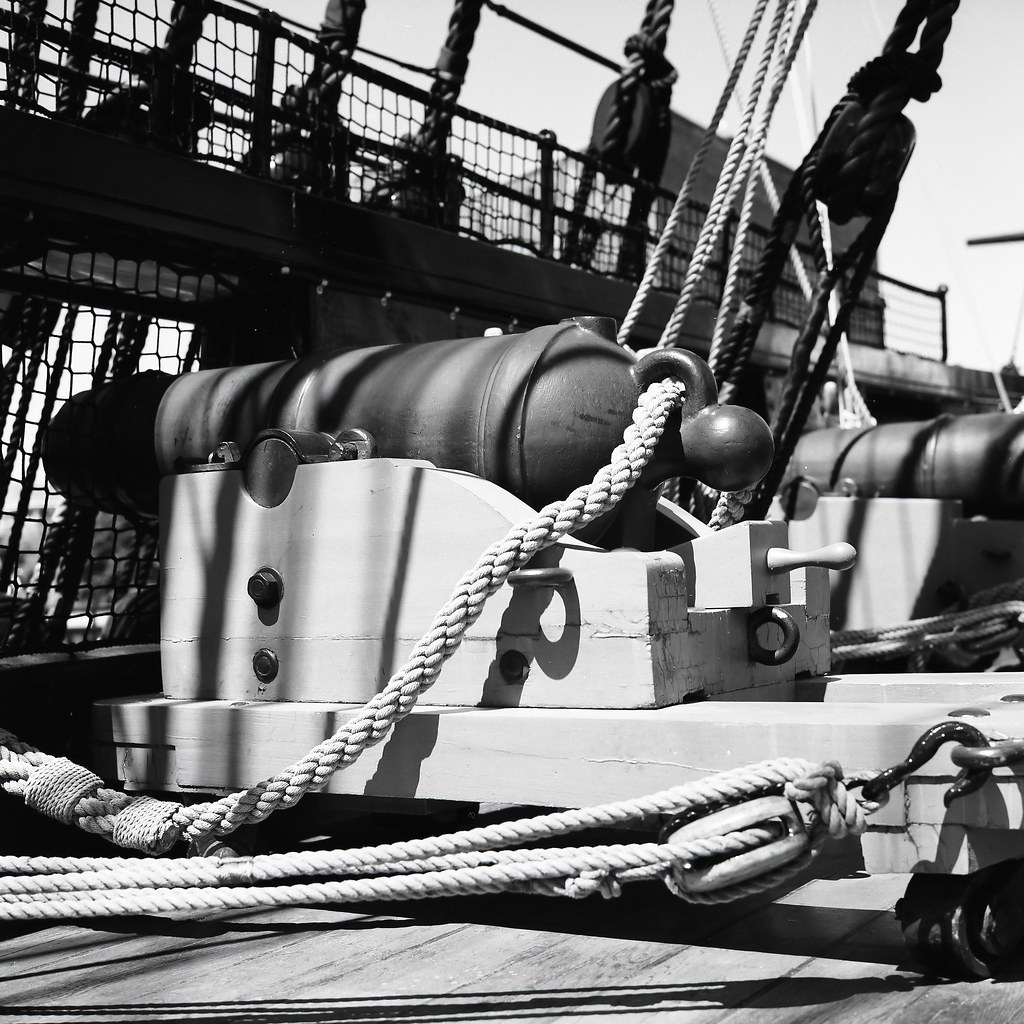 Through the first decade of the 19th century the Constitution took part in several smaller conflicts against the French at the end of the 18th century and against the Barbery Pirates in 1805. She returned to Boston in 1807 to refit and repair. In 1811 she was tasked with bringing the new American ambassador to France and on her journey home she was shadowed by several British Warships. When war was declared in June of 1812 the Constitution put to sea to begin hunting British ships on the shipping lanes. In August 1812 the Constitution encountered and engaged the HMS Guerrier, a British fifth-rate frigate. Under Isaac Hull, the two ships engaged in fierce naval combat, eventually the Guerrier’s mizzine mast was taken out, and in close maneuvers the two ship’s riggings became entangled as they continued to fire broadsides into each other. But due to the unique construction of the Constitution the British shots bounced off her hull. Huzzah! Her sides are made of iron, came the cry from the crew. Both ship’s sent boarding parties aboard but neither side was able to take the other ship. With the Guerrier’s main mast also broken, the Constitution pulled off then returned once the Guerrier attempted to engage. Hull taking this a signal that they surrendered sent a party to the British ship. Upon arrival, the Guerrier’s captain responded to the surrender inquiry by saying Well, Sir, I don’t know. Our mizzen mast is gone, our fore and main masts are gone-I think on the whole you might say we have struck our flag. Prisoners were taken and the Guerrier was burned. Upon the Constitution’s return on Boston, the ship and crew were greeted as heroes, and the name Ironsides, stuck. 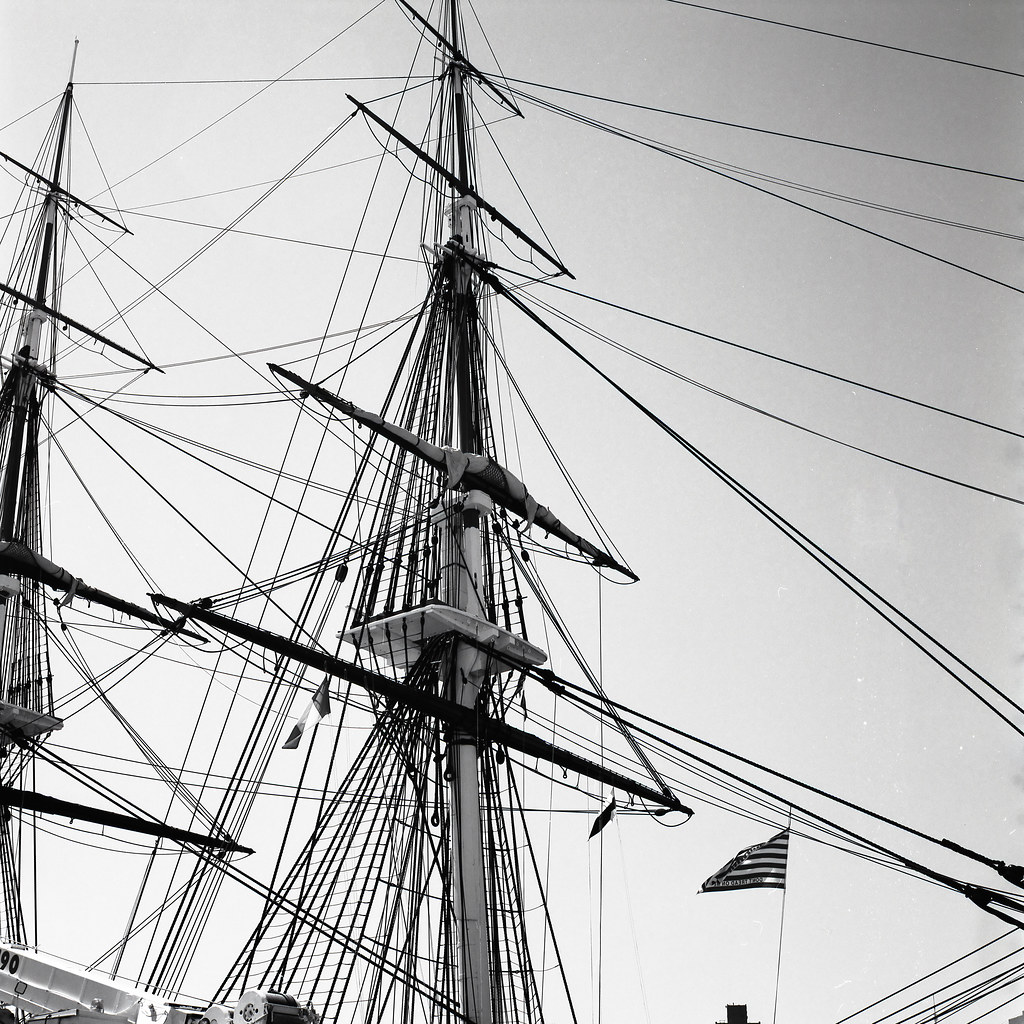 Looking up into the ship’s rigging, as a commissioned naval vessel the ship remains seaworthy, and is crewed by US Navy Officers and Sailors.
Rolleiflex 2.8F – Carl Zeiss Planar 80mm 1:2.8 (Green Filter) – Blazinal 1+25 6:00 @ 20C

The victory over the Guerrier was exactly the moral boost that the United States Navy needed. The mighty Royal Navy could in fact, be beaten at their own game. The Constitution continued to cause havoc among the ship’s of the Royal Navy, some more notable engagements against the RN was the HMS Java, HMS Cyane, and the HMS Levant. Upon receiving word that the war was over, the Constitution returned to her home port in Boston. Unlike her two sister ships, the Constitution was undefeated in battle. By 1820 she was refit for service as the flagship of the Mediterranean Squadron to defend American shipping interests against piracy. After her tour she returned again the Boston in 1829. Through the mid-19th century she was used as a training vessel and by the end of the civil war was the only surviving ‘original six’ frigates. She was made sea-worthy again and sailed for Paris in 1878 for the Exposition. But upon her return she was laid up in the Charleston Navy Yards, unfit for service. 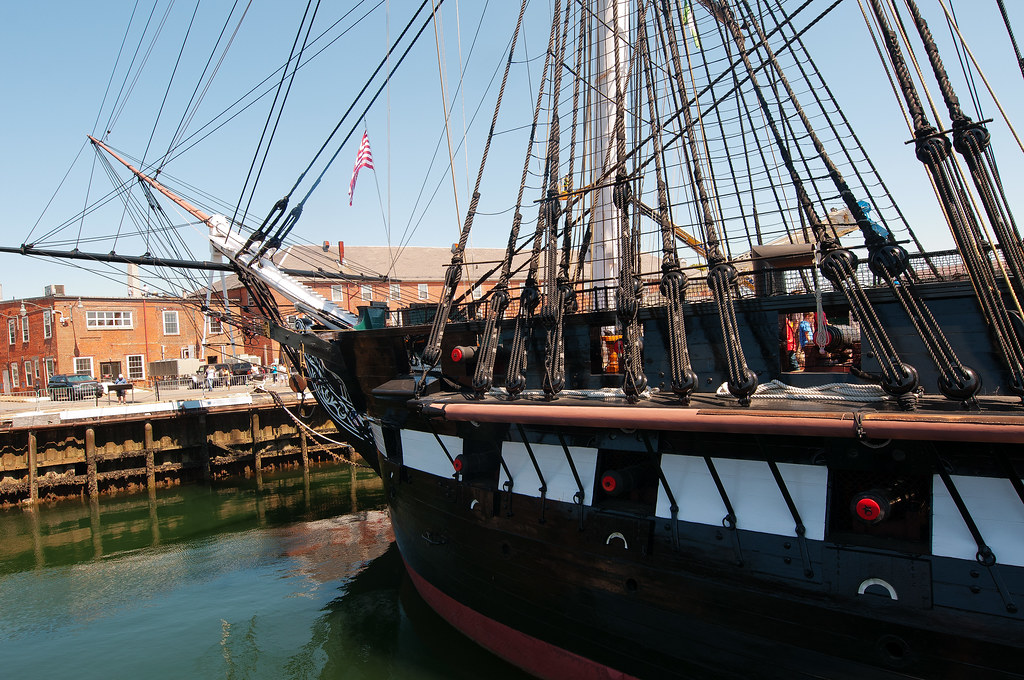 While all the historic guns on the Constution are non-functional, the ship maintains a modern 40mm saluting gun for ceremonial purposes.
Nikon D300 – AF-S Nikkor 17-55mm 1:2.8G DX

Her future looked grim, but the Constitution, Old Ironsides, had taken upon a life of her own. She herself was the undefeated hero of the War of 1812. Congress agreed in 1900 that she should be restored but allocated no funds. In 1903 the Massachusetts Historical Society stated plainly that she should be restored to active service. The secretary of the Navy in 1905 went so far to state that the Constitution should be used as target practice and allowed to sink. The public outcry swept the nation in 1906 and money was raised and allocated for her restoration and in 1907 she was reopened as a museum ship. But by 1924 she was again given a death sentence, a national fundraising campaign was undertaken, and in 1927 she entered dry dock. Live Oak from a Florida Navy yard from an 1850 ship building project that never happened, tools from Maine, and skilled tradesman arrived in Boston to work on Old Ironsides. And on the 1st of July 1931 she was restored and re-commissioned in the United States Navy. She was captained by a 20-year senior officer with the rank of Commander and crewed by select members of the USN. The Constitution went on a tour of the United States coast line. Repairs through the 1990s made the ship sailworthy again and after extensive training the USS Constitution sailed under her own power at a speed of six knots (11 km/hr) in 1997. She again sailed on August 19th 2012 in celebration of the 200th anniversary of her victory over the HMS Guerrier. 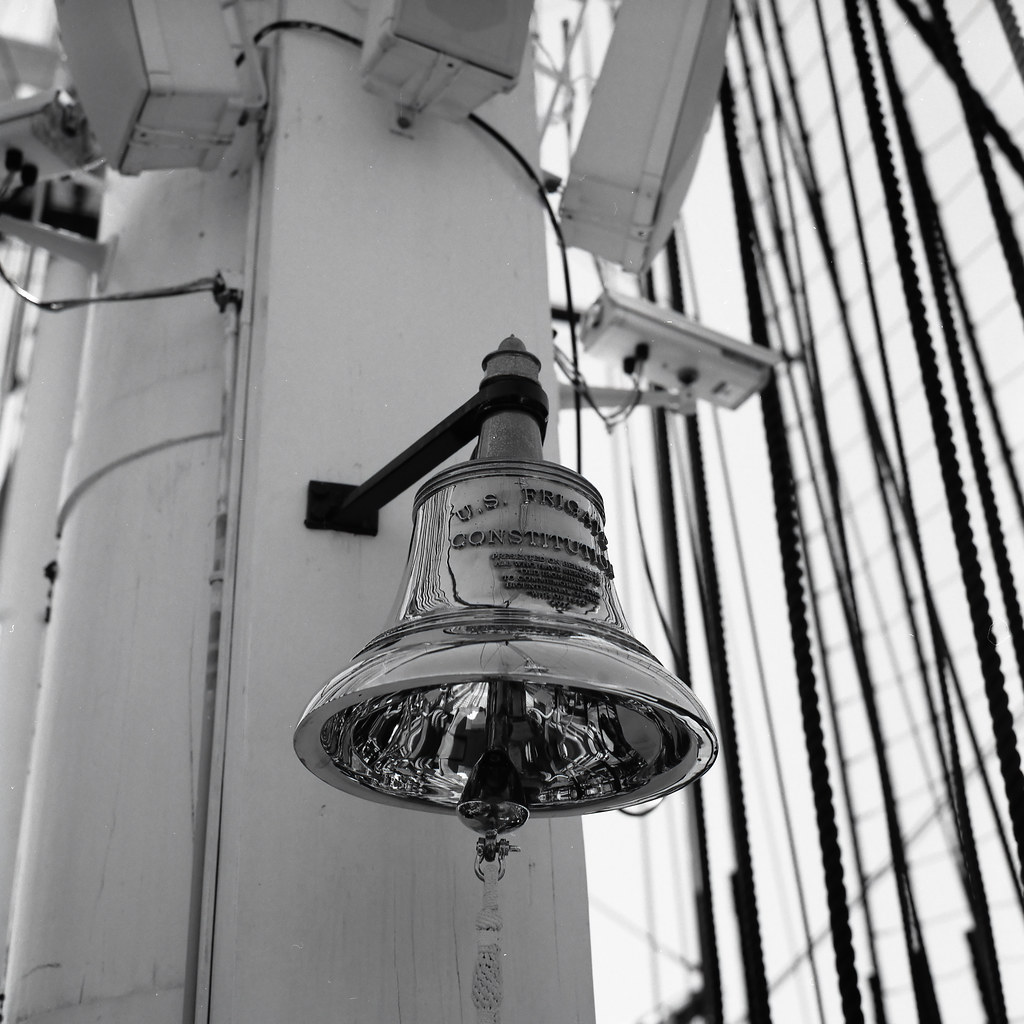 I have only scratched the surface of the history of this amazing ship, and I encourage you, my readers to explorer it further on your own. And if you’re ever in Boston, go and visit her. She remains today, the oldest commissioned warship still afloat in the world. I’m hoping to get out to see her sail and salute next year on the forth of July.