When it rains, the last place you’ll want to be is Fort Meigs, trust me on this one. The fort isn’t the nicest fort that got involved in the war, there is not a long drawn out or particularly memorable history about the depot fortification. It really is more of an afterthought, a post designed to be a stopping point for troops and supplies, and while it saw only two sieges over the course of the war it did stand out in one way. It was the largest wooden palisade wall fort in all of North America, at least when it was first built. 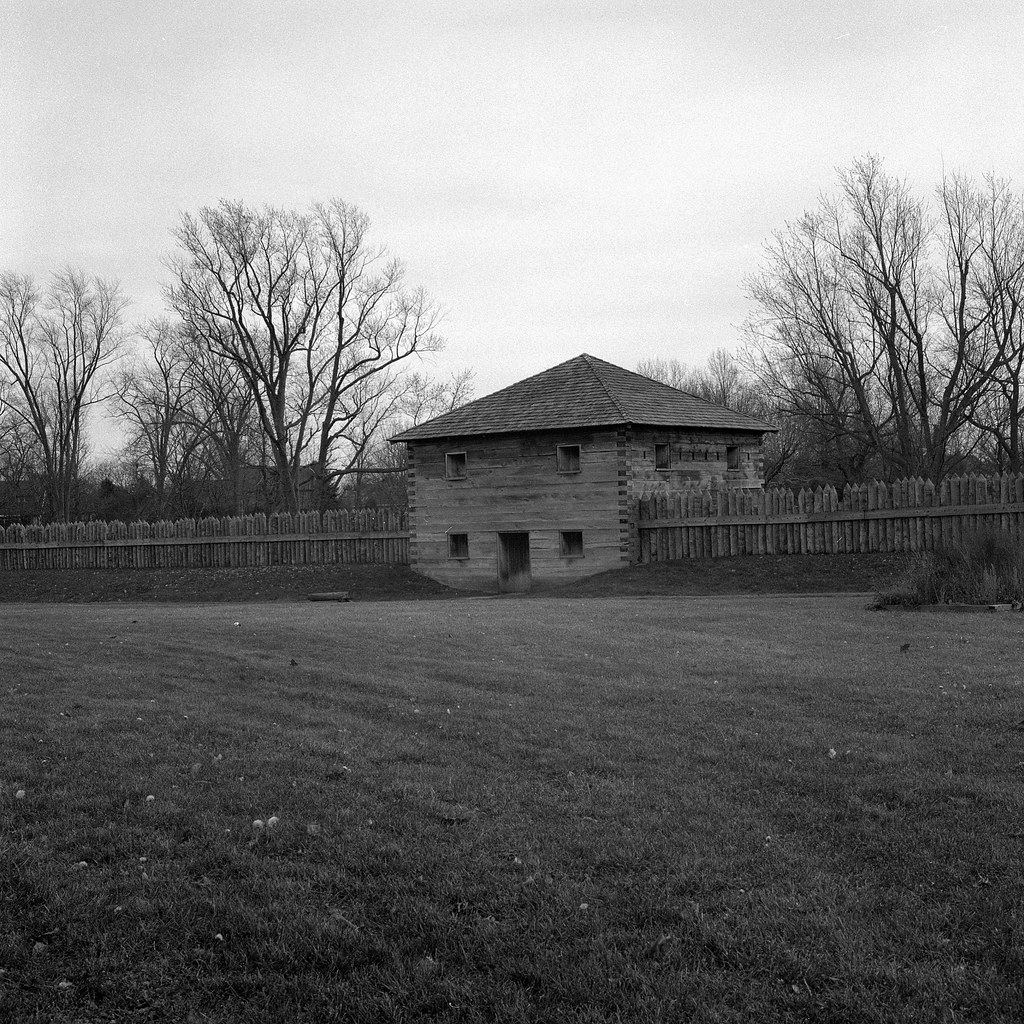 Fort Meigs was one of several depot forts stretched across what is now the states of Indiana and Ohio under the orders of General William Henry Harrison. Harrison named the fort for the current governor of the territory, Jonathan Meigs Jr, who had encouraged many citizens of the territory to volunteer in the militia. These forts would serve as stopover points for troop columns and supply trains. Harrison would build on the network of posts that had been ordered by General Hull in the early days of the war. Fort Meigs construction would begin in the winter of 1813 shortly after Harrison took command of the Army of the Northwest, and it would be the largest of the network. The fort would be in the position of striking against the British-held Michigan Territory and the western reaches of Upper Canada. It would be the main staging post for Harrison’s planned invasion of Upper Canada. 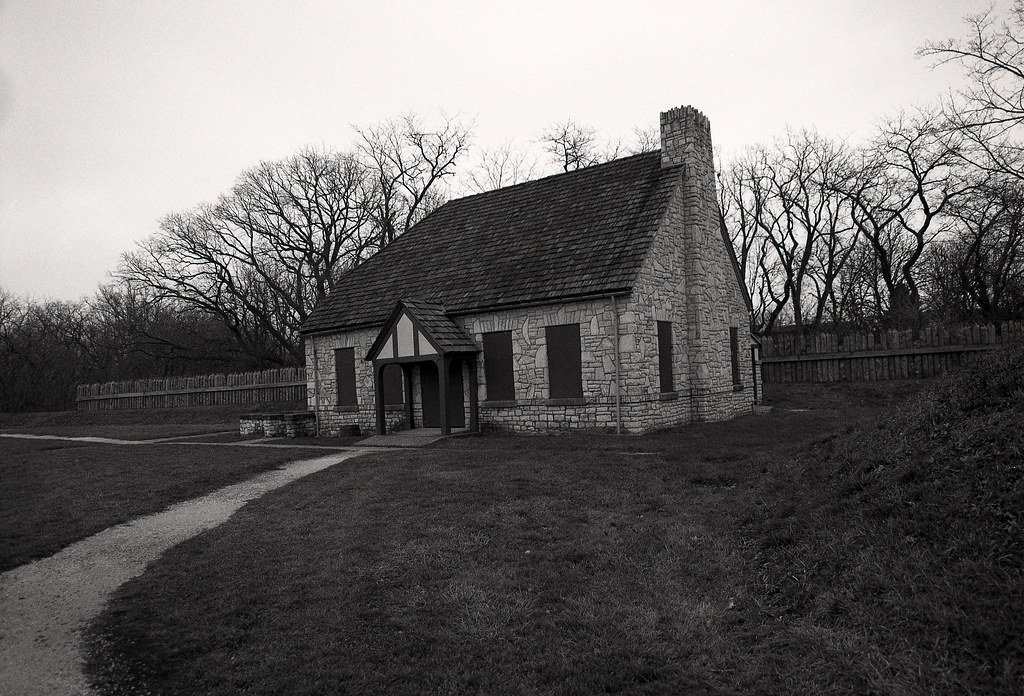 Harrison would waste little time on construction. The fort like many of the others in his network consisted of a simple palisade wall of sharpened wooden logs, arrayed along the perimeter of the wall would be seven blockhouses. Each blockhouse served as a strongpoint on the wall many mounted smaller artillery pieces that could be used against infantry and give a defense to any infantry positioned inside. Unlike some blockhouses of the era, they were not used to quarter the fort garrison. The walls enclosed ten acres of land and could support a garrison of 2,000 troops all of which slept in tents. The fort maintained five artillery batteries along the wall, two magazines, plus a number of support buildings. 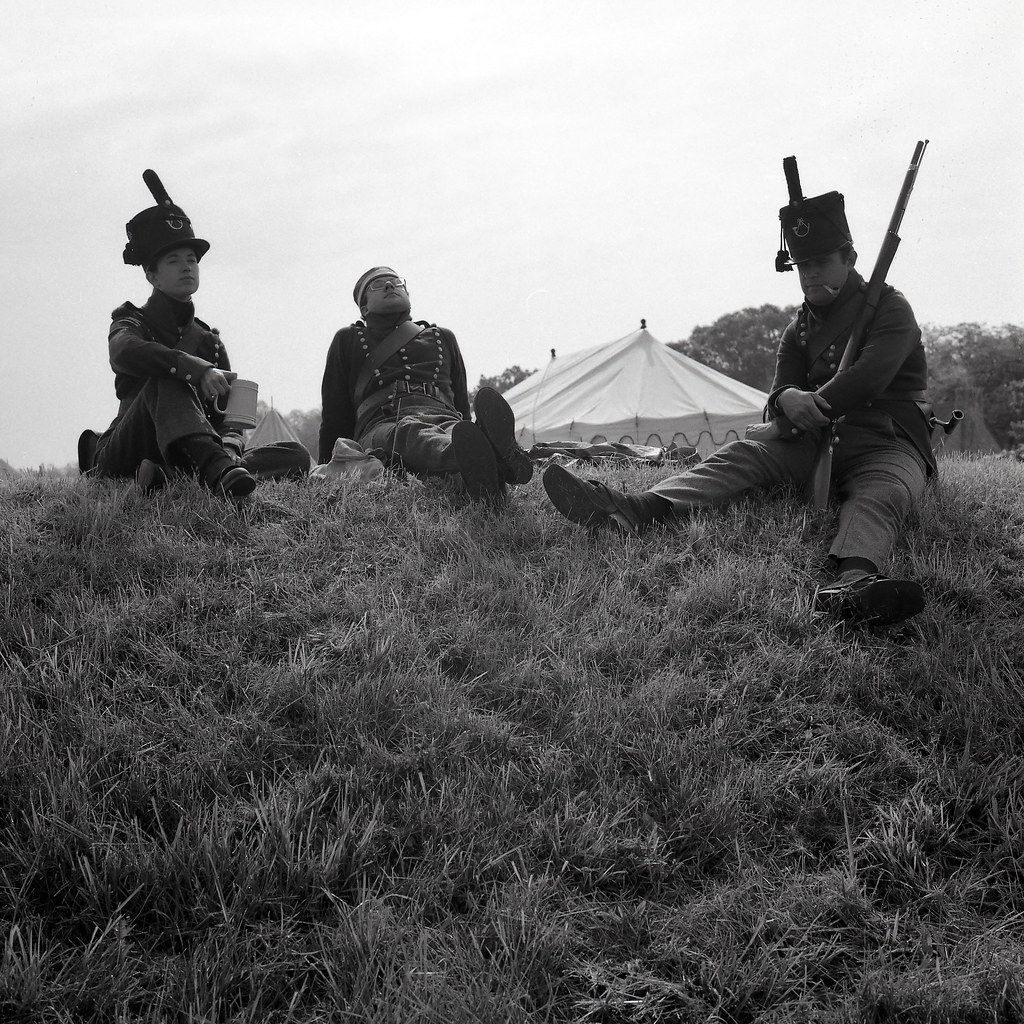 British reenactors sit atop a representation of one of the many traverses that criss-crossed the interior of the fort built during the siege of 1813.
Rolleiflex 2.8F – Carl Zeiss Planar 80mm 1:2.8 – Ilford HP5+ @ ASA-400 – Processing By: Silvano’s

The fort saw most of its action during the war in 1813. It would fall under siege twice in that year. The first siege in the spring was the deadliest. During the siege, General Harrison commanded the garrison personally and seeing the British cannon ordered twelve-foot tall traverses be built to absorb, deflect, and defend the garrison from the British artillery bombardment. After an attempt to break the British siege by using Kentucky militia failed, the two sides fought to a standstill with the British breaking the siege after only two weeks. A second attempt at capturing the fort would happen in the summer and fail even before it began. 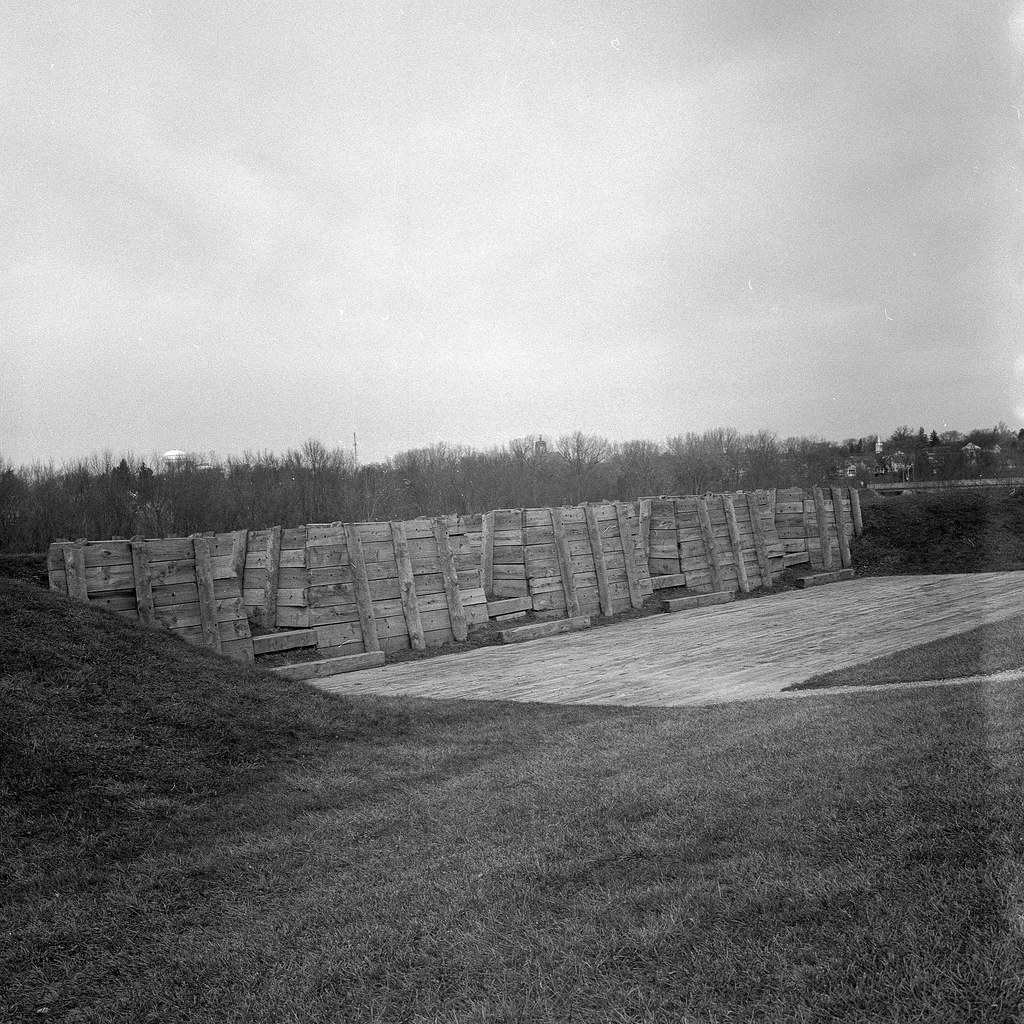 An example of one of the artillery batteries at Fort Meigs. This one facing north across the Miami River to oppose the British artillery on the oposite shore.
Rolleiflex 2.8F – Carl Zeiss Planar 80mm 1:2.8 – Ilford Delta 400 – Kodak TMax Developer (1+4) 6:30 @ 20C

Once General Harrison’s army marched north in September 1813 after the American victory at the Battle of Lake Erie the fort itself was scaled down to a mere fraction of its former size, a single blockhouse surrounded by a small palisade wall and a small garrison to provide a fallback point and prevent the British from pushing into Ohio. It would see no further action during the war and would be abandoned once word of peace reached the area in 1815 and sit abandoned and would eventually burn down under mysterious conditions. The whole area would be purchased by Timothy Hayes as farm land. Hayes knowing the history of the area decided to use it only as pasture lands for livestock not wanting to disturb the ground where Americans soldiers died during the First Siege of Fort Meigs. 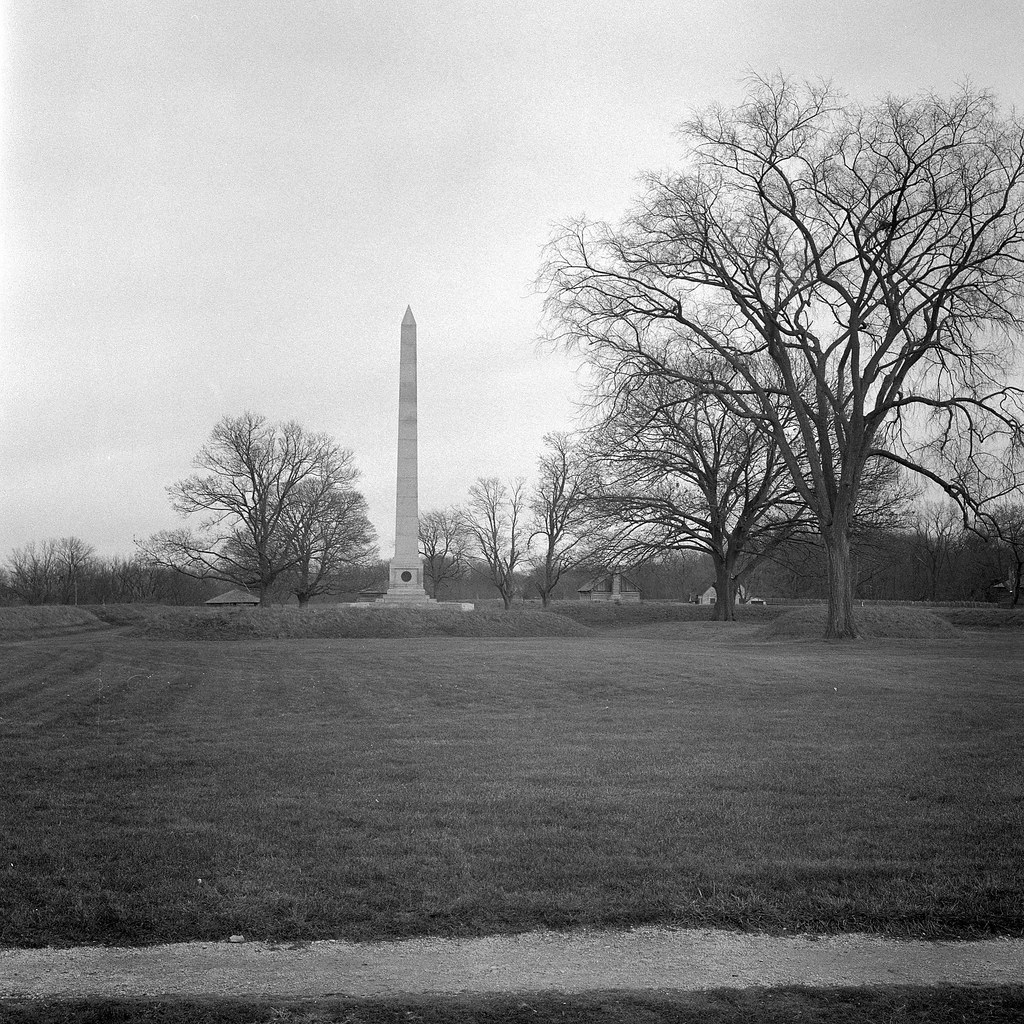 During his presidential campaign, William Henry Harrison, would return to hold a political rally on the former grounds of the fort, a presidential race he would go onto win in 1840 and held the shortest presidency in American History to date. A rally by veterans of the American Civil War on the grounds in the early 20th-Century would see a large monument constructed to the men who died during the first siege of the fort. While the land stayed in the Hayes family, it would be sold to the Ohio Historical Society in 1960. The society would take the next fourteen years to rebuild the fort to how it would have looked in during the siege of 1813. 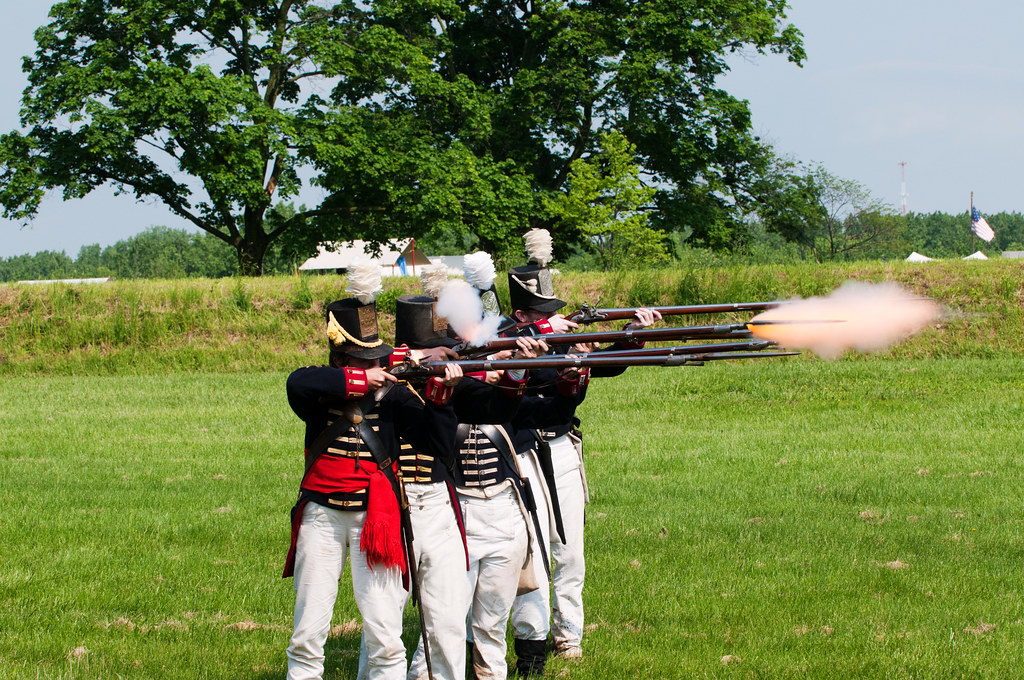 During the open season, the fort is garrisoned by reenactors who represent one of the units to garrison the fort.
Nikon D300 – AF-S Nikkor 70-200mm 1:2.8G

Today the Fort remains a national historic site and is open year round to visitors, although it is only staffed during the spring and summer seasons. When it is open, visitors can enjoy musket and artillery demonstrations by reenactors dressed as American troops of the era, they can take in the numerous memorials to the troops who died and served at the fort and the visitor’s centre has a small museum about the fort’s history. The site also hosts a seige weekend at the end of May on the Memorial Day long weekend.

Written with Files from:
Guidebook to the Historic Sites of the War of 1812 Second Edition by Gilbert Collins – 2006 The Dundurn Group Publishers
Lossing, Benson John. The Pictorial Field-book of the War of 1812. Gretna, LA: Pelican Pub., 2003. Print.
Hickey, Donald R. Don’t Give up the Ship!: Myths of the War of 1812. Urbana: U of Illinois, 2006. Print.
Hickey, Donald R. The War of 1812: A Forgotten Conflict. Urbana: U of Illinois, 1989. Print.
Berton, Pierre. Flames across the Border, 1813-1814. Markham, Ont.: Penguin, 1988. Print.
Web: www.fortmeigs.org/history/
Web: www.ohiohistory.org/museums-and-historic-sites/museum–historic-sites-by-name/fort-meigs/history