Hull was worried, he had received word that Fort Mackinac had been taken by the British and that General Brock was heading west with reinforcements from York, but he continued to occupy Sandwich, despite the arrival of Lieutenant-Colonel Henry Procter, commander of the 1st battalion 41st of Fort at Fort Amherstburg on the 26th of July ahead of General Brock. Procter had orders to disrupt the American supply lines to the south and isolate Hull and Fort Detroit. On the 4th of August, Hull received a message from Captain Brush in command of one such supply columns that had stopped at the settlement of Frenchtown by the River Raisin, the message made mention that a party of native warriors along with Tecumseh were lying in wait at Brownstown along with British Regulars. Brush was not going to move until the threat was cleared. Hull deployed a force of 200 men of the Ohio Militia under Major Thomas Van Horne. Three miles north of Brownstown, Van Horne’s column was set upon by Tecumseh and two dozen warriors. The Militia forces broke and engaged in a running fire-fight with the natives until they crossed the Ecorces River, after which the natives broke off the fight. Van Horne returned to Detroit reporting 18 dead, 12 wounded, and 70 missing. A second skirmish broke out on the 8th near the Native village of Maguaga, Lieutenant Colonel James Miller commanded a small force of regulars from the 1st and 4th US Infantry along with Michigan and Ohio Militia, 600 in all, along with two light field guns. Miller’s force, attempting to secure the supply lines encountered a small British force commanded by Major Adam Muir consisting of members of the 41st Regiment, along with local Canadian Militia and native warriors in support. The two forces clashed in a brief skirmish before British and Militia forces mistook Tecumseh’s warriors as opposing forces from the Maguaga village and opened fire on them. The lapse of discipline and friendly fire threw the British line into confusion and Muir called for a retreat and pulled back to Fort Amhurstburg. The British suffered a single death and 23 wounded, Miller’s column suffered 18 dead and 63 wounded. When Hull got word of this, he ordered the immediate retreat back to Fort Detroit, believing that his supply lines were cut and that the British force was much larger than he had initially thought. This action only further called into question the aged General’s ability to lead. Hull ordered most of the troops across the river to Detroit, himself joining him, the final garrison crossed on the 11th, just days before General Brock’s arrival. 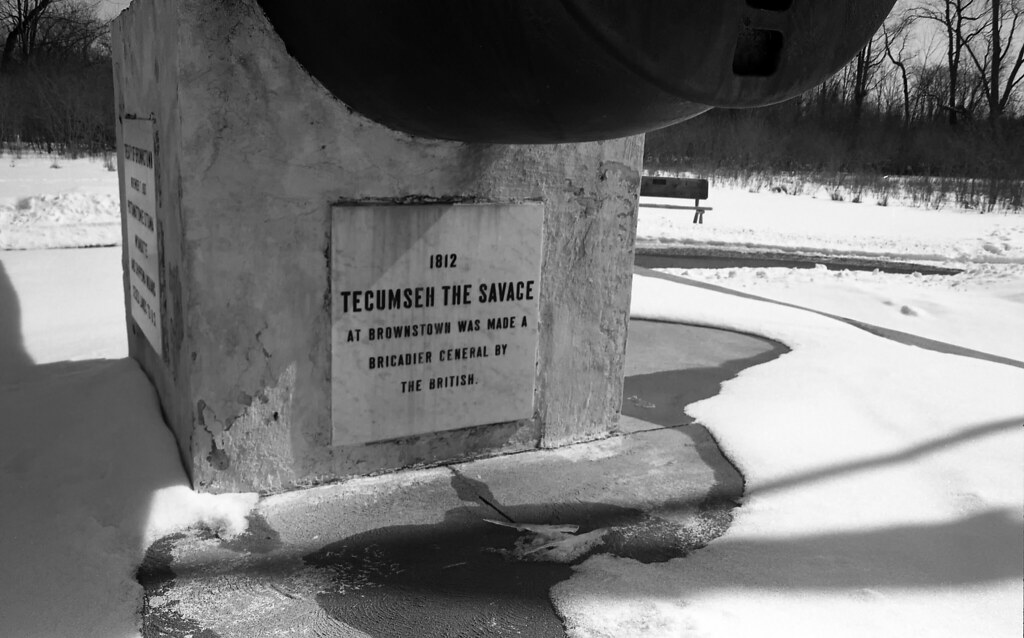 The Monument to the Battle of Brownstown in Gibraltar, MI

Brock arrived via Port Dover at Fort Amhurstburg on the 13th of August along with additional regular troops from the 41st of Foot and a detachment from the Royal Newfoundland Regiment, plus members of various militias from York, Lincoln, Oxford, Kent, and Norfolk. When Brock arrived he was immediately introduced to Tecumseh, the two men took and immediate liking to one another. Now here is a man, Tecumseh declared. Both recognized the same warrior spirit in the other, and the will to fight. Both agreed that the best way to secure the west was to eliminate the threat from Fort Detroit. The only problem was that even with the additional troops, they were still outnumbered by the American forces at Detroit. But both men were cunning, and planned to take the fort by guile and deceit if they had to. Brock set about ordering the Royal Artillery troops he brought with to begin constructing artillery batteries along the shore of the river and brought the HMS Queen Charlotte and HMS General Hunter onto the river as well. He also ordered additional campfires lit to give the appearance there were more troops present, he also ordered that the old uniforms of the 41st be given to the militia to give them the appearance of British Regulars. The final touch to the whole deception was a letter, addressed to Captain Roberts of the 10th Royal Veteran Brigade requesting that he stop sending natives south, as there were already 5000 warriors present. The letter of course was a lie and was allowed to fall into the hands of the Americans. Brock was banking on two points, the first being the poorly trained American regulars and militia balking at a line of redcoats, and second their general fear of the natives. 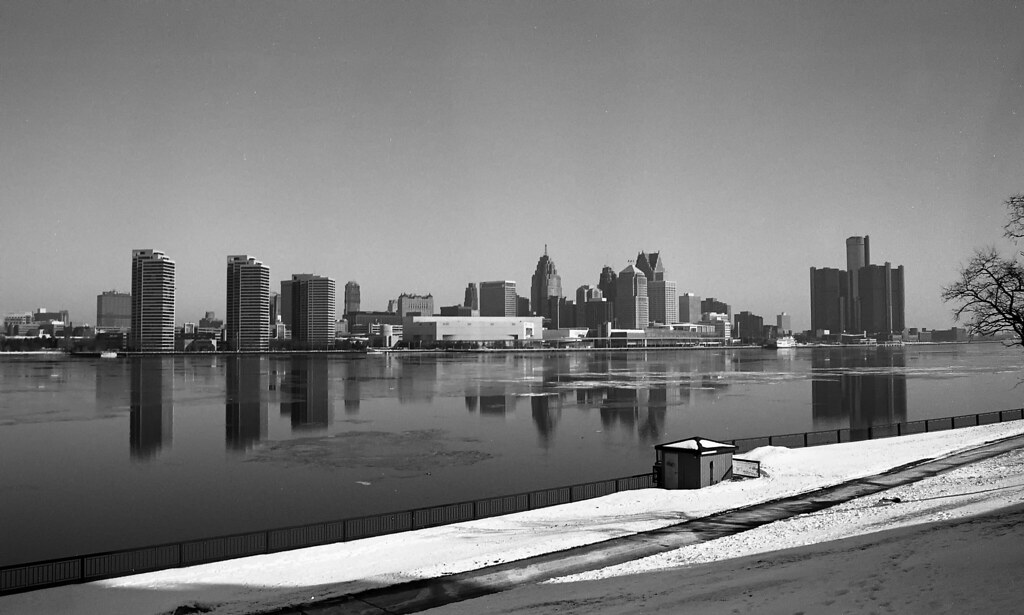 Downtown Detroit as viewed from across the River in Windsor, Ontario

The artillery bombardment started on the 15th of August from both the shore batteries and the warships on the river. Brock also sent an order of surrender Hull stating that he could not control the native warriors should they breach the wall. Hull replied by opening fire with his own artillery. Brock ordered the artillery barrage to continue through the night while he readied the infantry to cross. They crossed in the early hours of the 16th, Tecumseh’s warriors took to the woods, giving loud war cries while moving in a circle to give the impression of the 5000 warriors the Americans believed were present. Brock split his troops into three Brigades. The first consisting of 50 from the Royal Newfoundland Regiment along with Kent and Lincoln Militias, the second had 50 troops from the 41st Regiment along with Oxford, York, Lincoln, and Norfolk Militias, the third brigade had the main body of troops from the 41st along with five artillery pieces. Brock had the troops encircle the fort covering the rear (furthest from the river) where the defenses were the weakest. He planned to occupy the supply road and wait out Hull in fortified positions. However he was spurred to action when he learned of an American column approaching from the South and ordered an immediate assault against the Fort. Hull blinked. His own paranoia, combined with drink and fear for the safety of his family and much to the anger of his officers ordered that they surrender, sending his own son to deliver the message to Brock, asking for three days to prepare. Brock gave Hull three hours. In addition to the fort and her garrison, Hull also surrendered the column on approach. 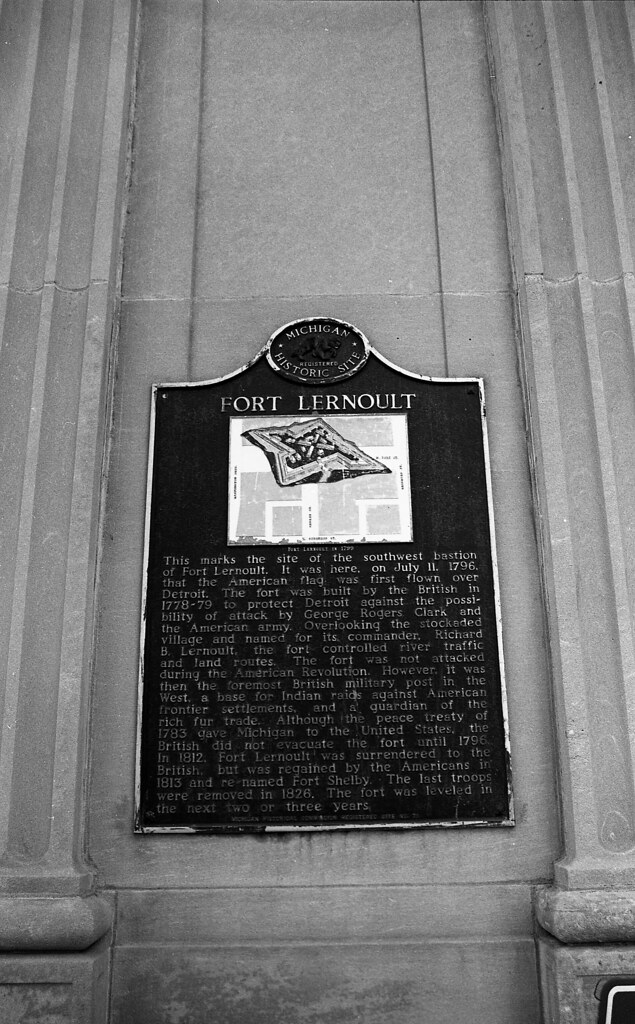 All that’s left of Fort Detroit, a plaque on the side of a bank, the fort was demolished in 1827

Casualties were low for the short siege, the Americans suffering two killed officers, one of whom was the former commander of Fort Mackinac, Lieutenant Hanks, and five from the other ranks. Two Royal Artillery gunners lost their lives. British forces not only gained control of Fort Detroit but raided numerous small arms, 30 heavy cannons, and the brig USS Adams. The American regulars and officers were sent onto Quebec City as prisoners, the militia, those who were left were paroled and escorted to Cincinnati to avoid possible retaliation by the natives. Hull would eventually be paroled and arrested and brought before a general court martial, many former officers that served under him would testify against him and Hull faced a death sentence. However President Madison interceded on his behalf commuting the death sentence instead stripping Hull of rank and privilege and dismissing him from the army. Word of Brock’s victory and capture of Detroit would eventually reach the Court at St. James, and King George III would invest him with a knighthood. Brock also earned the moniker the Savior of Upper Canada. By the time word of the knighthood reached Upper Canada, Brock had already met his death, again leading a charge against American Invaders at Queenston Heights. Veterans of Detroit would eventually be able to earn the Military General Service medal in 1847, one of only three battles in the War of 1812 that could earn a former soldier the medal. 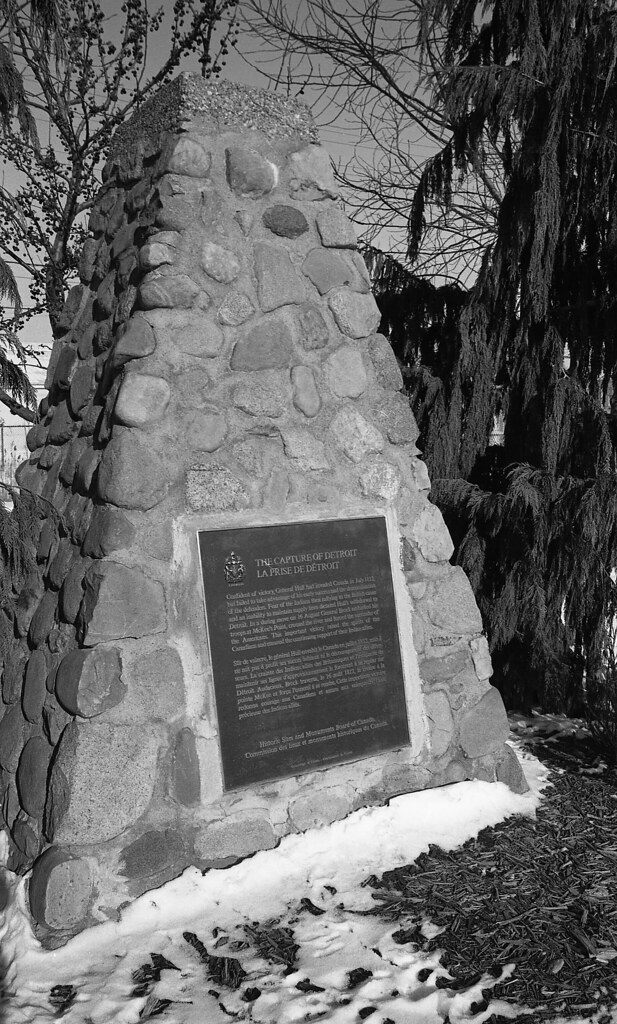 The monument to the Capture of Detroit by General Brock near the launch point of his assault in Windsor, ON

In the grand view of the war, these early engagements, Mackinac, Brownstown, Maguaga, Sandwich, Canard, and Detroit have generally been overshadowed by Crysler’s Farm, Chatugey, Fort Erie, and Queenston Heights. But it was these early battles that set the tone for the early engagements of the war that saw the Americans balk in fear in the face of natives and British regulars. However the Americans would eventually gain younger bolder officers to train them to the point where they could meet their British counterparts toe-to-toe and win. Sadly many of the sites connected to the invasion of Upper Canada and the capture of Detroit have since been paved over. Fort Amhurstburg was destroyed in 1813 during Procter’s retreat, and Fort Detroit (later Shelby) was demolished in 1827. Historic Plaques mark the engagements at Brownstown and Maguaga. A lonely cairn stands in an industrial park in Windsor to mark the capture of Detroit.

Written With Files From:
Guidebook to the Historic Sites of the War of 1812 Second Edition by Gilbert Collins – 2006 The Dundurn Group Publishers
Web: www.eighteentwelve.ca/?q=eng/Topic/14
Web: www.warof1812.ca/batdetroit.html
Web: www.historyofwar.org/articles/battles_detroit.html