When it comes to large format cameras, certain ones stand out as masters in their field. And while a camera is just a camera, and is only as good as the photographer who uses it. I’ll admit I had some trouble with the Technika; there is something to say about a fantastic tool. The Linhof Technika V is a beautiful precision piece of equipment. And while a Technical camera does not have the same freedom of movement as a monorail that is not physically possible, it comes pretty close. And while I certainly messed up in playing a bit too much with some movements, in general, it is an amazing camera to operate. Thanks to James Lee for loaning out not only the camera but a couple of lens for a review. 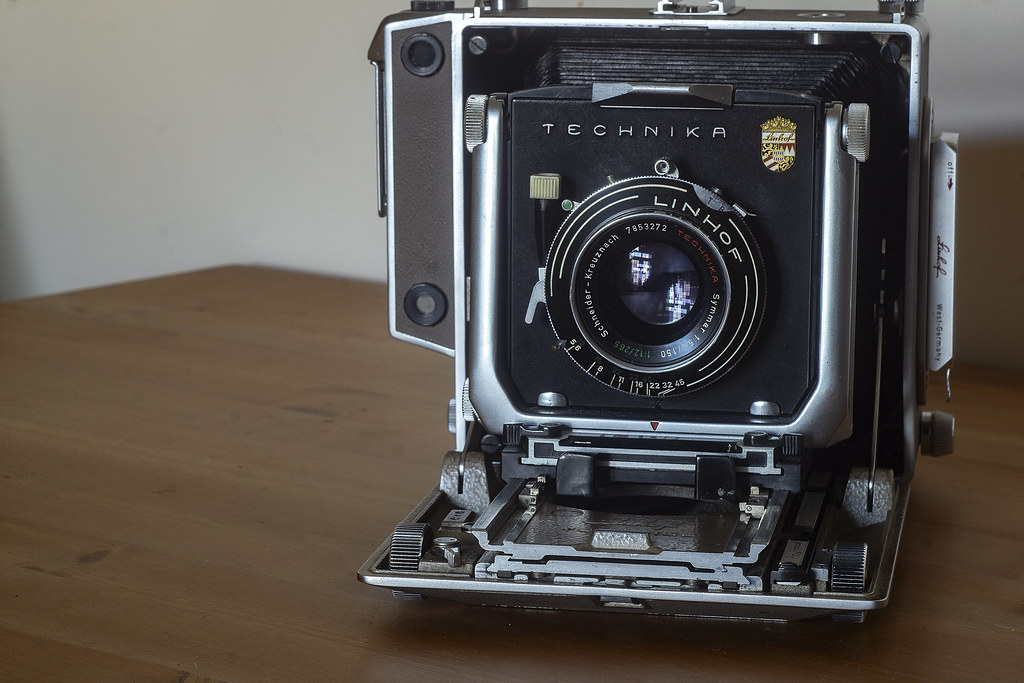 Background
The idea and concept of an all-metal precision camera came from Linhof; they are the original and remain the industry standard. And while the Linhof company saw its start as a camera shutter manufacturer in the late 19th-Century, they got into the camera production market in the first decade of the 20th. It wouldn’t be until 1934 that the original Technika saw the release and was quickly followed up by the Technika II. But these two cameras were simply proof of concept on what a professional camera was and provided the foundation for the iconic follow-up. In 1946 the Technika III was released and showed the world exactly what a professional camera could be. The III had movements in both the front and rear standards, a rotating back, and a rangefinder. And with the rangefinder, you could swap out the cams easily to allow you to adjust the focus to match the focal length of your lens. Rounding out the III was an all-metal body that could take hits and remained quick and easy to setup. The III ran circles around its contemporary press cameras. Linhoff would go on to produce five varients of the III throughout its decade long production run. In 1956 Linhof introduced the Technika IV. A major update from the III, the IV had improved and simplified front standard that introduced swing movements and the use of centre-tilt lenses. A simplified rangefinder cam (although you could not use the cams from the III on the IV) that allowed for full coupling of lenses between 75mm and 360mm. An improved Graflok back allowing the use of Polaroid and Packfilm backs. The IV also introduced the standard Technika lens board. Production of the original IV lasted until 1964, an improved version introduced in 1963 continued production until 1976. That same year Linhof introduced the Technika V, the only major difference between the IV and the V is that the V finally included standardised rangefinder cams. The V and the Master became the new industry standard that built on and improved on everything produced throughout the III and IV. And today you can still purchase the Technika V, or as it’s called today the Technika 2000.

Impressions
At first glance, the camera appears to be just another press camera, compact shape, swing down the front bed, and a rangefinder. And if you’re familiar with setting up a press camera such as a Crown Graphic, you will have no trouble getting the Technika up and ready to take photos. Like press cameras, you do need to drop the bed if using a 90mm lens and there’s even a second dropped position for an even wider 75mm lens. The one thing I noticed is that you can easily lose the connection to the rails with the front standard and bellows if you aren’t careful. Not so much on extended, but I did a couple of times when closing the camera up. The ground glass is bright and clear, easy to focus. There is an integrated hood, but it didn’t stay open too well, but the whole assembly flips aside, and you can use a focusing cloth. The rangefinder makes it easy to double-check your focus. Make sure you have the correct cam installed for your focal length for it to work properly. And yes, the cam is interchangeable. But where the Technika shines is with movements, everything is geared and can be locked down, and it stays put. As you can see, I went with some movements, but in a few cases, I didn’t compensate and ended up with some weird geometry. See what I mean that a camera is only as good as the one running it?

Experiences
Honestly, the camera is a beast, and I’m glad I wasn’t carrying it too far too often. Most of the time, it sat in the car, and I drove it from point to point. But the camera is all metal and can certainly handle a weekend at a military encampment under canvas. And while I did mention that being familiar with press cameras is handy for basic operations. You certainly want to be well versed in movements to be able to get the most. The amount and level of movements are overwhelming, and if you don’t compensate, you can end up with strange-looking lines. Lens swaps are easy with a single latch and a setting grove to put the board in, make sure to seat the lens right, or it won’t latch properly. Focusing is easy with good ground glass, and while I landed the focus because I was shooting at nearly fully stopped down, a loup might be a handy accessory to have along for the right. I cannot comment on how well the camera handles while operating hand-held as the one I had did not have the massive handgrip on the side. But given the weight, it probably is something not to do often and at long distances.

Optics
What makes the Technika V wonderful when it comes to lenses is the fact that it uses the standard Linhof Technika Board. A board that has become a bit of a universal lens board, even the Intrepid 4×5 uses the same pattern. And it’s the same pattern found on both the III and IV models up to modern Technika Cameras. And they’re fairly easy to pick up both new and used. When it comes to optics, you’re going to have to look even closer at image circle on the lenses you want to use on the camera, especially if you want to use all the movements. Make sure you have the room to ensure full coverage of your sheets with all the tilts, shifts, rotations, and raises. Thankfully I was able to work with both Schneider-Kreuznach and Nikon lenses in this cases, but even my Fuji would be a stand-out lens on this camera.

Lowdown
A Technika is a camera not for the faint of heart. You can see that it even overwhelmed me who is used to this sort of stuff. But if you’re used to all this stuff, and can handle the level of movement and precision and are maybe looking for something a little more portable than you monorail beast. A technical camera is certainly for you. Especially if you do a lot of product photography and architecture. And while these cameras are available on the used market. They do hold a fairly high price point certainly for the newer models, on the low end you’re looking at 900 dollars. But if you have the cash, you can purchase Linhof Technika’s new, or if you want to save some cash the IV and III are excellent choices. Don’t go any lower than the III or you’ll get a different camera. Another option if you’re outside the United States and even Canada would be a Micro Precision Products camera which is of the same era as the early Technikas but is difficult to get over here unless they came with someone from England when they moved. As a starter large format camera, I would warn you of a Technical camera; a better and less expensive choice is a Press Camera or even a monorail to get used to the format and the style of photography it comes with.

All Photos Taken in Meaford, Collingwood, and Penetanguishene, Ontario