The first SLR camera I owned, a Minolta SR-T 102, came with the non-X version of this lens. Aside from a Kiron zoom lens, the Rokkor PF 50/1.7, was the lens that lived on that camera. And when I got the newer version, I made sure that even though I gave up my Minolta bodies, I kept a lot of my good Rokkor glass. And I’m glad I did, while these days I use the 45/2 pancake more, I make sure never to let this general-purpose, everyday use, fast prime that will never let you down. 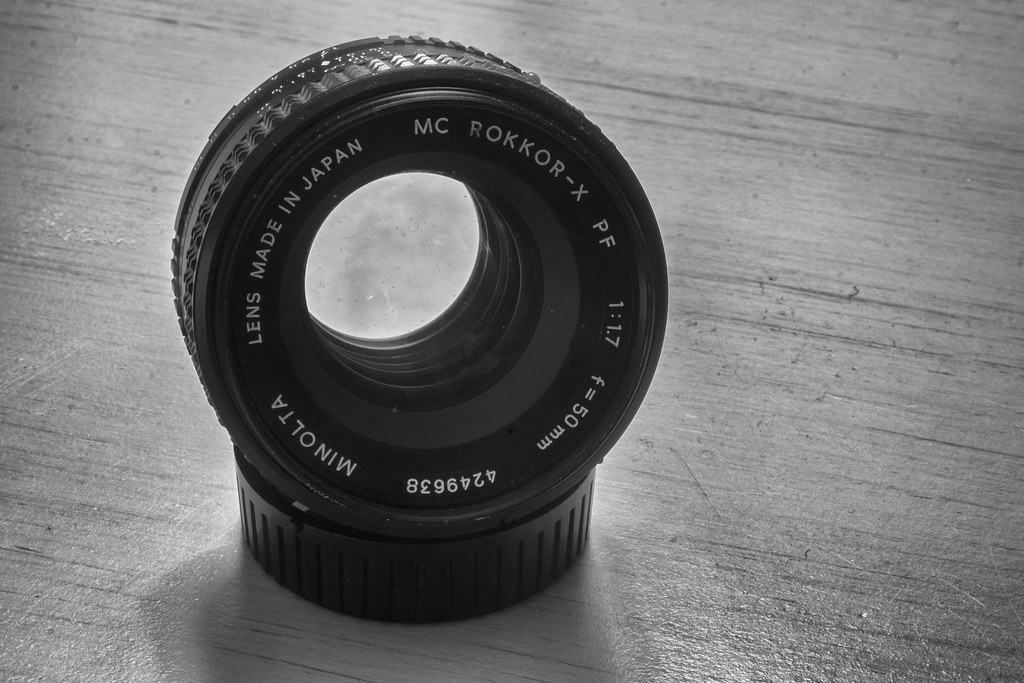 Build Quality
What strikes me as odd about this lens is its overall size. For only being an f/1.7 lens, it is far bigger than my Nikkor 50/1.4. With an all-metal construction from the lens mount to filter ring, the lens can easily take an accident drop with little damage other than some minor cosmetic issues. The focus ring has a lovely rubber grip, and focus is smooth with a printed focus scale complete with an “R” marking for Infrared focus adjustment. The aperture ring is click-based so only full stops are available, and there’s a handy depth of field scale near the focus scale for zone focusing purposes. While heavy, the lens is designed for the larger cameras in the Minolta line. It fits wonderfully with the XE-7, and would be right at home on an SR-T, but might look out of place on an XG or XD camera and could throw off the camera’s balance.

Image Quality
Before I start, I’ll say this first, the barrel distortion I encountered in the other two 50mm lens reviews is probably due to the closeness of the lens to the test chart. When I increased the distance to three-feet from the film plane, all the lines are straight. The image quality is superb with this lens, at f/1.7, there’s no fall-off in the corners, and the items within the depth of field are sharp. At f/1.7 you do have a razor-thin depth of field, but once you bring the aperture down to f/4 things become far more manageable. And you start to see the sharpness of the lens come through. The out-of-focus elements are smooth, nothing much to write home about but overall are pleasing. Once you get to f/8 and f/16 everything snaps cleanly into focus. The one issue I do have is that it does only stop down to f/16 which can mess with some landscape work, but as you can see with the above images, the three soldiers are in focus by f/16. In general, the image quality out of the lens is excellent and will serve you well with any film or sensor behind the glass. I have used this lens mostly on the XE-7, but have used it as a cheap macro option with my Sony a6000 on a Fotodiox SR to E-mount adapter.

Applications
Like any 50mm lens, you can never go wrong with one in any lens kit. Although when it comes to the MC Rokkor-X version of the lens, you should do your research before picking one up. The issue with the MC version is that it won’t work fully on Minolta cameras that include some form of auto exposure. It works great for me on my XE-7 because it has only aperture priority semi-automatic. But on an XD or X-700 it will work, but only in a semi-automatic or manual mode. Even though the lens is only f/1.7, it makes for great low light work and shallow depth of fieldwork with portraits. What strikes me as odd is that the lens only stops down to f/16, but it can still work well for landscape work and general carry around. When I was shooting Minolta almost exclusively, the 50/1.7 was the lens I used the most. There’s also the fact that it has good close focus, so makes for a decent poor man’s macro. Plus the lens works great on digital cameras, I’ve used mine with a Fotodiox adapter on my Sony a6000.

The Low Down
The fact of the matter is that a lot of people will go more for the 50mm f/1.4 version of this lens, which leaves the 50mm f/1.7 a bargain on the used market. Both the MC version (good for full manual and semi-automatic cameras) and the MD version (good for manual, semi, and fully automatic cameras) will run between 20-50$ on the used market. The f/1.4 version for around the 120-150$ range. In both cases, these are the best-kept secret in optics. The lens is no slouch; it makes for an excellent addition to any SR-Mount kit with more modern cameras. It works flawlessly on my XE-7, and I should take it out more often if I’m in more low-light conditions than relying on my 45/2. There does remain the weight issue, it is a big lens and does stand out a lot from the camera body, but overall well worth the sacrifice. And honestly, there is little difference between the f/1.7 and f/1.4, and if the f/1.4 is anything like the Nikkor versions, you will have a corner fall-off wide open, something this lens does not have. And when it comes to picking between the MC or MD version, it all depends on the camera you’re using, but in both cases are well worth the purchase if you don’t already have one in your toolkit.