If there is one lens in my entire lineup that I know and have used the least, the Rokkor 135/2.8 is that lens. I’ve had the lens for some time and decided to keep it after I got out of Minolta cameras as my primary camera kit but dug it out when I got the XG-M and XE-7 in close succession to each other. And I have used the lens a total of twice. Once on the XG-M and once on my a6000 at Disney. As you probably have seen when it comes to short telephoto lenses my focal length of choice is the 100 or 105mm I tend to avoid the 135mm despite having to amazing lenses available to me in the focal length. Thankfully I do have a new application since the 135mm challenge last year, and the Rokkor 135/2.8 is a rock-solid lens choice. 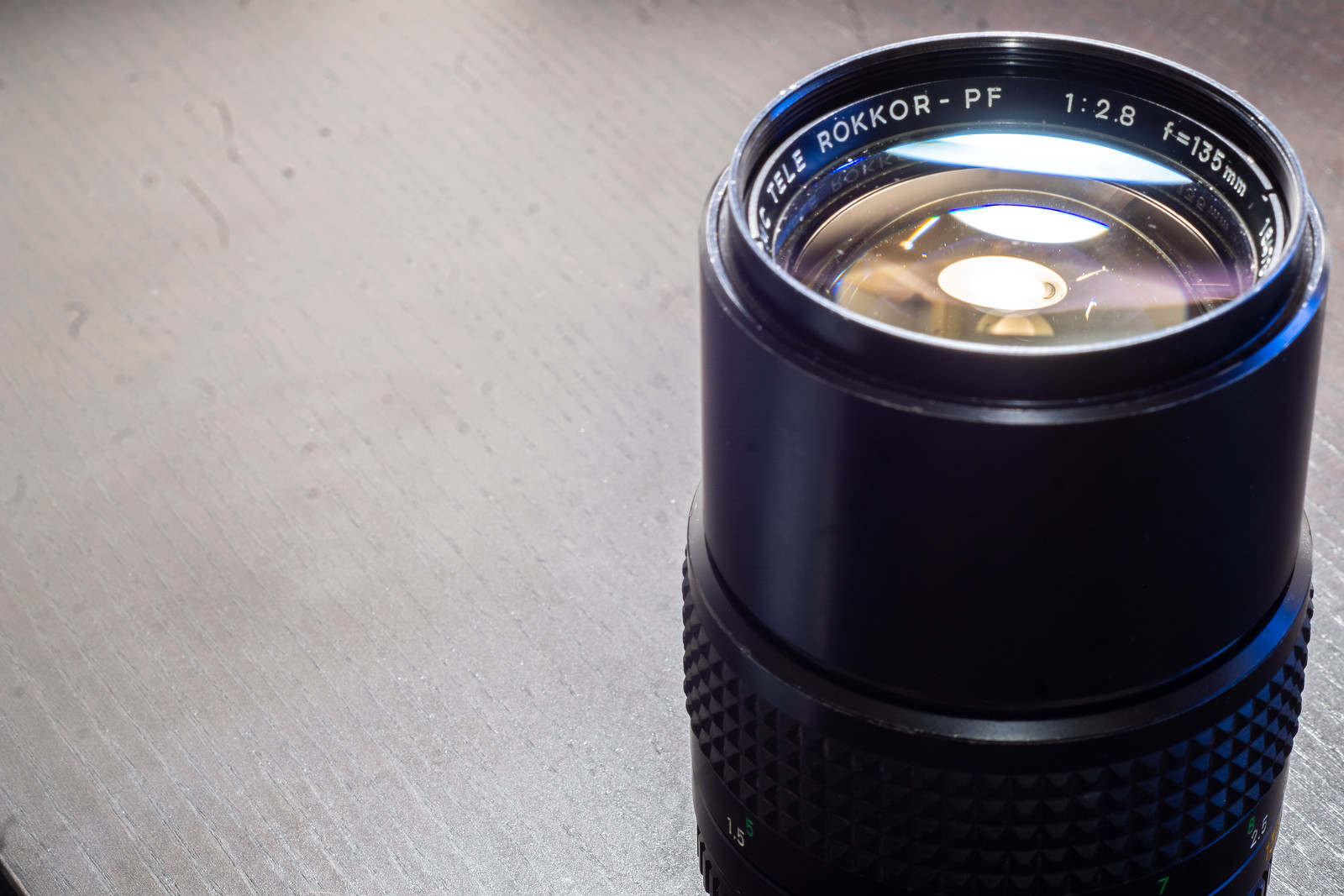 Build Quality
The first thing that you’ll notice about the lens is how heavy it is, I mean this thing is a beast. It’s big, heavy, and awkward. And that should come as no surprise as the lens is all metal, the only plastic is the focus grip and the red lens mounting alignment dot. I had initially mounted the glass on an X-7a with the Motor Drive 1, and the balance is excellent, however, on the XG-M, the balance was way off. Thankfully, the lens is perfectly balanced on the XE-7 as it’s a far larger camera than either of the previous two bodies. Surprisingly the lens balanced well on the a6000 as long as I was standing still as soon as I was moving it got far too challenging to manage. Operationally the lens is smooth; the aperture ring is nice and clicky so even without looking you’ll know you’ve hit the stop. Focusing is also smooth but a reasonably long move from infinity to the closest focus of 1.5m. While you won’t be able to focus too fast, your focusing will be accurate. The lens also has a built-in lens hood which does help reduce the amount of lens flare.

Image Quality
If anyone tells you that this lens is not sharp, they are both right and wrong at the same time. They also need to learn how to shoot beyond f/2.8. And yes at f/2.8 and even f/4 the lens is not one of the best performers. It’s hard to focus with such a narrow depth of field and a long focal length. Even I felt that things couldn’t get better after seeing a lot of flack online about this particular lens. But as soon as I started working at smaller apertures f/8 and above to f/22, the image performance improved a lot. And then working out in the field I was again presented with sharp images when I was working in that sweet range. The out of focus areas of the lens is nothing to write home about, they’re smooth but nothing special at least they’re reasonably pleasing in an average sort of way. Then again I didn’t get this lens for low-aperture photography, the length of the lens allows for a certain amount of compression, that even in those sweet ranges you get a fair amount of subject separation.

Applications
Personally, after working with this lens for a review again, I find myself enjoying the focal length a little bit more. For street photography, it gives you that extra reach, and it’s excellent at catching architectural details which is why I took the lens to Guelph which as some fantastic details on the old buildings that fill the downtown. As a short telephoto lens, it makes for the right choice for portrait work and event work and photojournalism. While it does open up to f/2.8, you don’t want to shoot it that wide open as I mentioned in the previous paragraph. So it may not be your best choice for low light work without adding some sort of flash to the mix. And being longer you do need to have a fast enough shutter speed, I generally stuck to speeds above 1/250″ to account for camera shake. And if you’re looking to use this lens for close focus applications, there’s no near macro function here, the closest you can focus is 1.5 meters.

The Low Down
If you’re looking for a good deal on a short telephoto then the Rokkor-PF 135/2.8 is the lens for you, you can find copies of the lens online for well under 100 dollars, most ranging between 30-60 dollars. I do recommend going for the f/2.8 version rather than the f/3.5. While you probably won’t need that f/2.8, it just looks nicer on the camera than the slower version. While far from the perfect lens and there are plenty of flaws with it, it is not as bad as many people say. And even still it won’t be my primary choice but certainly will come along on future trips when I take my XE-7.