When I first started working with the Maxxum system, there were two lenses recommended; the first is the 35-70mm f/4 (which will get a review next year) and the 70-210mm f/4; these were both parts of the original lineup of lenses in 1985 and have stood the test of time. Affectionately known as the ‘beer can’, a name was applied to several different lenses of the same type. While it might not be a fast lens (f/4), it still produces fantastic results, and despite the solid metal construction, the lens remains a well balanced long lens for outdoor use and one that works perfectly with the modern Maxxum 9. 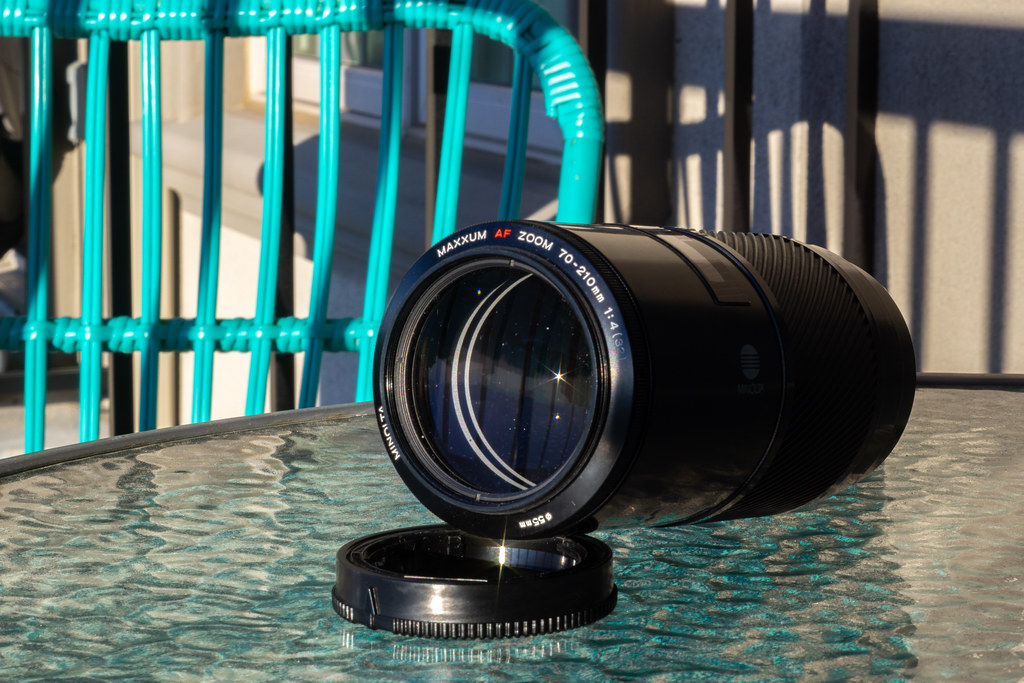 Build Quality
This lens earns the nickname beer can well, although I have never seen a beer can this big, at least any that contains good beer. Being an early version, this is an all-metal lens, especially in all the areas that matter, the mount, the body and the hood. It is heavy, well made, and handles like a dream. While it was a bit front heavy on a more miniature camera like the 7000, but it works perfectly on my Maxxum 9 with the VC-9 grip. The lens is immense but doesn’t change in length based on the focal length; all the movements are internal, including the focusing, which does help with stability. The zoom is controlled from a twist function rather than push/pull, and the zoom ring is big and easily found with your eye to the viewfinder. The manual focus is small for a lens this size, but then again, most of these early Maxxum lenses are designed with only autofocus use in mind. However, there are some annoyances with the lens. First is the filter size, 55mm. Most lenses from this era use either 49mm or 52mm, so having one slightly larger is troublesome (but you can always use the larger filters with step down rings. The second is that the manual focus ring is smaller and hard to use. And finally, the hood doesn’t use a bayonet or even screw-on; instead, it uses two clips that are not exactly stable or easy to mount and dismount quickly. At least the hood is made of metal and can take a hit, but hard enough, it might break away from the lens and only damage the mounts rather than the hood and lens itself.

Image Quality
When it comes to image quality, the beer can, despite its nickname, has an excellent reputation for image quality but is not perfect. The first thing to bring up is that there are some distortion issues with the lens. While not present at the 70mm mark, there is a bit of pinching at the 210mm mark when you’re getting in close with your straight lines. But when you’re focusing far, that becomes a non-issue. One of the biggest help for the lens is that f/4 maximum aperture, as with some faster lenses at wide-open f/2.8 or wider, you start to get some serious fall-off at those bigger apertures. At 70mm, there’s no fall off at that f/4 aperture; it is rather noticeable at 210mm. But by f/8, that is gone, and you start to get into the sweet spot of the lens that stands between f/8 and f/22. You get excellent subject separation for the 210mm mark between those apertures, although, at 70mm getting those smaller apertures by f/22, you have a good end-to-end depth-of-field, which f/32 seems to be overkill certainly helps deepen that depth of field at 210mm. Overall the lens has excellent sharpness at all apertures, even wide-open at f/4, and only get better, but again has that sweet spot between f/8 and f/22. Nothing is exciting about the out-of-focus elements; there are no swirls, but they are clean and smooth around the edges and are pleasing, and with a complex background, will be nicely rendered. The lens can flare, and that hood, despite its troublesome mounting, does help, and when outside the day I was shooting, that hood certainly saved my butt to get some of that flare.

Applications
Like any telephoto lenses, the obvious applications include sports and event photography, where you’re far from the subject and need to get closer. And while you’ll need to seriously push your sensitivity or film speed when you’re indoors with only that f/4 wide open. But outside the lens is a champ, one of the first events I took this lens to when I first got it was a War of 1812 reenactment. Despite its age, the autofocus speed on modern alpha cameras is fairly quick, that even in sports or events, it will handle a bit of speed and action well. It also is an excellent portrait lens when working with one or two people. And with a constant f/4 aperture, you have excellent subject separation without having to surrender too much depth of field. Setting the 70-210/4 beercan is the macro capability where I would struggle with my 70-200/2.8G to get those test shots were a breeze with the 70-210/4 beercan. It also makes for a good landscape lens when you want to isolate or get close to subjects and architectural detail work. Another option is street photography if you’re comfortable standing further off your subjects to remove yourself from the equation.

The Low Down
While not the fastest lens on the market for the Alpha series, it certainly has the qualities of a more expensive lens without the massive cost. They are an older lens, being among the first generation of Alpha lenses to come from Minolta but still work brilliantly today on everything from the 7000 to the 9 and even Sony’s digital SLR options and mirrorless options with an appropriate adapter. Surprisingly that hasn’t affected the price of this lens mostly because people I feel are turned off my the f/4 maximum aperture. And it shows you can get one of these for between 40-90 dollars on the used market, which will give you a good telephoto and leave plenty of room in your budget for additional lenses. I’ll close by saying that this is one of the lenses that made me like zoom lenses.