Here we are at the end of another year! While 2021 was significantly better than 2020, we still have a long way to go, but things certainly were looking brighter (not so much now)! And while I certainly did not get all I wanted to in for 2021 mainly because of continued restrictions throughout the first part of the year, I am happy with the amount of work I did, and I’m rather pleased with what I did do this year.

Project Work
For 2021 I brought back one of the first formats of photography projects I ever did, the fifty-two roll project. Where I shoot a roll of film each week for the whole year. And I have to say shooting a project that relies on going out and doing things; doing this during a pandemic with rotating orders and travel restrictions (both real and personally imposed) was an exciting experience. This year I decided to shoot three different film stocks, Fomapan 100, 200, and 400, dividing it up by season throughout 2021. Starting and ending with Fomapan 400, followed by Fomapan 200 and then right through the spring and summer with Fomapan 100. I feel I got to know these films far better, especially the 400 and 200 flavours. Although I’m still not sure, I will come to ultimately like Fomapan 200. I also went through the entire project without having my camera die on me or have some significant hiccup along the way. Plus, I got to add a couple of lenses into my camera kit, which I certainly will continue to enjoy working with in the future. I also made a point to work on the final book of the project in an ongoing method so that I can have that ready to release in 2022 after the last frame is shot and published. Like my Hasselblad based 52-Roll project, I selected a single frame from each week and wrote a far longer piece about each one using the same format as I did with the blog posts. I wrote about the history of that frame and why I picked that image, and why I selected the development, lens, and shooting style. 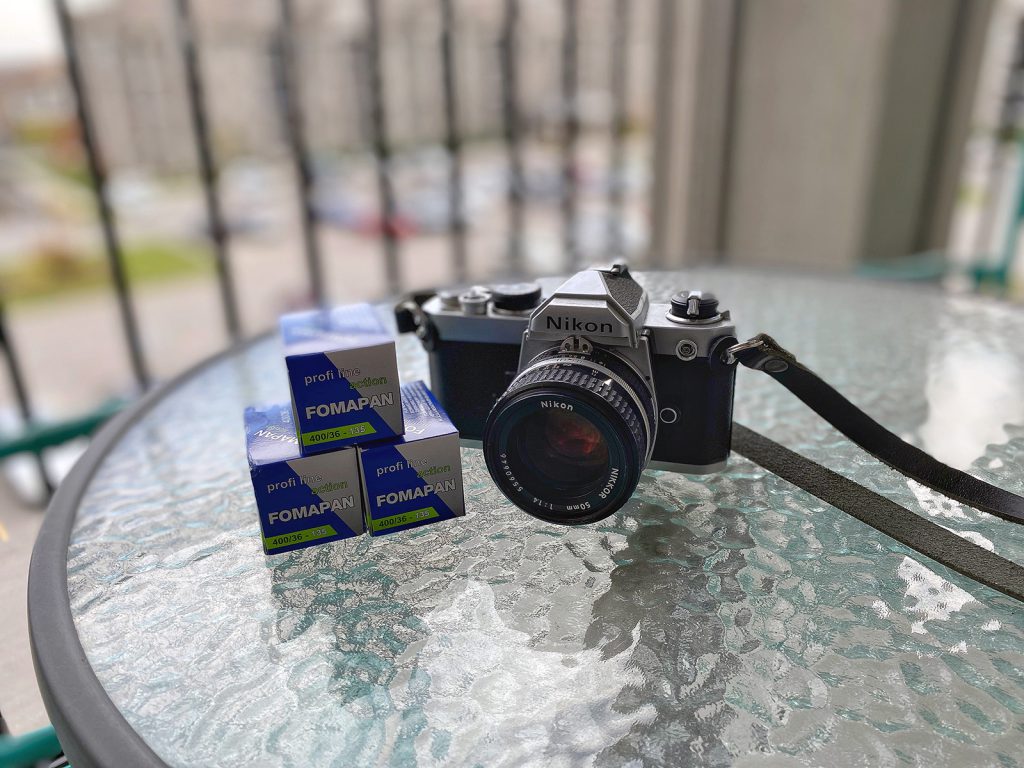 Also, over the spring, summer, and into the late fall, I worked on 2022’s project, one based on the railway history of Southern Ontario, and I’m pleased to say that project is 100% complete and ready to publish on Wednesday time slot. During this year, I visited fifty different locations related to railway history. Most were constructed during the second half of the 19th Century and the first half of the 20th Century, about 100 years looking back. This was the period when the railroad had this romance about it, stations were grand, bridges were long sweeping and exciting, and you had the massive iron horses thundering across the country by steam and the first steps into diesel power. There is also the darker aspect of the use of the railroad as a tool of colonialism. But what I’m particularly proud of is that I got the entire project done before the end of this year, so I won’t have to worry about playing catch up through 2022 and can press the button. Best of all is that the book is already completed and up for sale over on Blurb if you want a bit of a sneak peek or have a railway fan who is having a birthday in the first couple of months of 2022.

Reviews
The review work also went well, with a tonne of new films, old favourites being put to the test. Also, a tonne of fun and funky camera gear got a review along with lenses. But best of all is hitting an excellent stride with reviewing developers—best of all, hitting a tonne of new developers to my kit and found favourites along the way. The true star was Adox, with the Atomal 49, HRDEV, Silvermax Developer, and XT-3. Adox XT-3 being the newest of the group and getting me back into Ascorbic Acid developers. And don’t worry, the review work for next year is already well underway on all fronts, cameras, films, lenses, and developers. In some cases, I have close to four months worth of reviews up and ready to publish. And I have some exciting media up for review this year! Fuji colour film, black & white slide, and some colour chemistry.

The one thing you will notice for next year is more attention to consistency in the reviews. This subject was brought up by a comment on a previous post that I should use the same lens and camera body for a film review to help ensure that the film’s true nature is shown. What I dismissed at the time, I made a point to try and head down that route for the new year. So in 2022, I will be working on keeping things a bit more consistent. While I won’t use the same camera over the year, I’ll ensure that each film review is done with the camera and lens. I’ll continue to follow the same pattern of using T-Grain/Delta films for each lens review and developing in some General Purpose developer. At the same time, I’ve already slipped by having to use a couple of rolls of Eastman Double-X due to a lack of foresight on my part. However, I feel that I’ll be leaning more heavily on Ilford films this year for my review work, both in-camera and lens reviews. Developer reviews will continue to use the same selection of cameras and films as it fits the style to show off how the developer works.

YouTube Channel
Probably one of the most fun aspects of 2021 after successfully relaunching my YouTube channel in late 2020 was seeing where the medium could take my work. And I certainly have improved my work from those first couple of videos I produced. My original goal was to release a pair of videos each month, usually on a Tuesday on the week’s where an episode of CCR was not being released on a Friday. That number grew into three for a couple of months as I found other events a good fit for a video format. I started the year with my Sony a6000 with a proprietary on-camera video microphone that did not yield good results on the audio side of things. Sure, I could do some voice over work, but on a video with walking and talking that never fit fell. And I certainly didn’t want to try and synchronize everything in post-processing. I found my audio was far better after investing in new gear, a Nikon D750 and some external Rhode microphones, including a wireless unit. Plus figuring out suitable adjustments in post-production to allow for voice over a musical backing track.

And there is also the ongoing analysis on which videos do better than others. It seems that video reviews of cameras and light meters get the most traction. My review of the Gossen Lunasix F being the most popular this year with close to 3000 views. While they are highly technical videos that often include a lot more talking-head style video work. I have been trying to avoid talking for long periods as I tend to get tripped up, even after writing a script on what to say. I quickly discovered while I can use a two-camera setup, matching things up is a pain in the butt, but I do hope to try that a little more in 2022. As for next year, I already have a bunch of work done, including a couple of “On The Road Videos” and some reviews. Thankfully I can film these all out of order and set them up on YouTube to auto-publish, making my life much easier. I plan on following a similar idea as last year, with most months having a pair of videos released on a Tuesday. With a few months having three if there are that many Tuesdays. I also have a little fun ‘series’ in the works, and we can see if that pans out into anything.

Classic Camera Revival
We had an amazing year again with Classic Camera Revival and tried a lot of new things! We continued our “In The Loupe” series of interviews with some amazing members of the film photography community and even featured our first all-women episode, moderated by Chris. It’s a format we’ll certainly revisit in our next season. We also celebrated our 100th (numbered) episode and explored several amazing camera systems in the process. And despite being forced to record a majority of our episodes online, we did get together for the final four episodes of the season. But the biggest news is that the CCR team has expanded, as we added Jess Hobbs to the team this year! We have also already recorded the first two episodes of Season 8, which are both totally new types of episodes!

Toronto Film Shooters Meetup
For the Toronto Film Shooters group, 2021 has been a rough year; having been unable to meet in person due to restrictions through 2020, early 2021 did take its toll. I’m happy to say that the group has remanded stronger than ever. Over the first part of 2021, we hosted a couple of virtual meetups. Where you would go out and explore an area with your camera, pick up a take-out meal of choice with a beverage and join a Zoom meeting to discuss where you went and what you were shooting with. This worked for the first couple of months but eventually became a smaller group. We’re all having a bit of Zoom fatigue, but it kept the group connected. The Facebook group has been abuzz with activities with people sharing.

Thankfully as vaccination rates climbed and restrictions started to lift, we began to hold meetups again. And managed to squeeze in almost a year’s worth of meets into a few months. With a group meeting in the middle of October, along with early November and late November. And it felt good to get out and enjoy the company of fellow photographers and talk shop. And most important is that through 2022 the meetups will continue on a limited basis and in accordance with public health regulations. The task of running and planning is being delegated out too long time members and good friends Bill Smith and John Meadows, as I will have certain other activities that are going to be taking up a majority of the time. But I hope to make it out a couple of times, and parenting allows.