This won’t be the first time that I have a Nikon camera that is Nikon in name only. Remember the Nikkorex? While not the same idea, while the Nikkorex line was contracted out to another manufacturer, the Nikon FM10 is a straight-up rebrand (with some modifications) of an existing camera. The Nikon FM10 is one of many cameras built on the Cosina CT-1 Super/CT-1G chassis and dressed up to look like a Nikon. And I’ll give Nikon and Cosina one thing, the FM10 seems a lot like a Nikon right down to the red stripe. 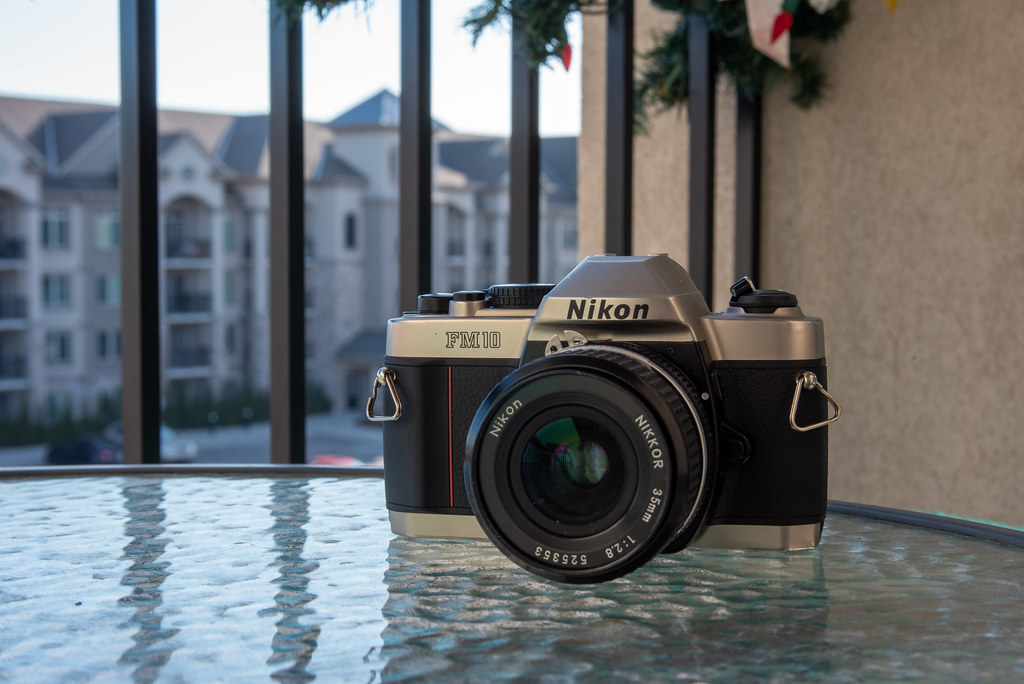 Background
Cosina, compared to Nikon, is a younger company, initially formed in 1959 as a lens maker. Although they quickly branched off into camera manufacturing and became famous as a contract company building cameras from their lineup but rebranding them for many first and second-tier companies. Their first SLR came out in 1968; the Hi-Lite saw the earliest point where Cosina built more under other names other than Cosina. Most came with the ‘universal’ lens mount, the Pentax K. The Cosnia CT-1 became one of the most valuable and often adapted chassis from the Cosina lineup. Released in 1979 with little fanfare, the CT-1 was among many similar cameras released through the 1970s and did little to up the ante on the camera market. It was metal internals and a plastic body, but it came with the reliable Copal Square shutter. The CT-1 is little more than a footnote in the catalogue of budget SLRs of the decade; it even featured the universal mount, which at the time was the Pentax K-Mount right from the factory. And Cosina would happily make the CT-1 for anyone who had the money; if you’ve seen piles of budget SLRs from the 1970s, chances are it’s a CT-1. In 1982, the CT-1 got an update, the CT-1A. The CT-1A replaced the old analogue needle with an LED display indicator and updated the power source to a pair of LR44 batteries. The CT-1A also featured updated exterior cosmetics and added a second CdS cell for open aperture TTL metering. The final update, the CT-1 Super, further improved upon the CT-1A came out in 1990. You have similar stylings with the addition of a handgrip and a shutter that topped out at 1/2000″, but those are the only two differences. The Super became the basis of many manufacturers’ cameras as simple student cameras, the Canon T60, Nikon FM10 and FE10, and the Olympus OM2000 sees their base on the Super. The FM10 saw some additional changes to the Super. First is the pentaprism, which has a smoother, flatter look (similar to the CT-1G), and a more rounded body. Nikon also insisted on adding a meter activation button, multi-exposure, and depth-of-field preview, which other rebrands and the stock model lack. Information is conflicting on when the FM10 was discontinued, discontinuation was announced in 2017, the FM10 was officially dropped from the Nikon product line in October 2020.

Impressions
Despite knowing that the FM10 isn’t built by Nikon, the contract with Cosina did a convincing job that the FM10 is a Nikon, at least where it counts. First of all, you have the Champaign finish that seemed prevalent in the late 1990s through early 2000s that got featured on several of the last consumer and prosumer cameras from the two-digit series (think F75). And most important is the iconic red stripe along with a handgrip. And you know, despite the chunky look of the original CT-1, you have to hand it to the designers at Cosina by the time they got to the CT-1 Super and CT-1G variant; they have a superb looking SLR. The camera itself is plastic and doesn’t have much weight, but it still feels solid in your hand; the camera layout is clean and easy to get accustomed to. The shutter speed dial carries forward the same set of speeds, with the film speed being a pull-up and set; the shutter release is big and has a satisfying release, although it is challenging to get that half-push to activate the meter. The metering activation button is a much easier means of getting that reading. The viewfinder is undoubtedly lacking in brightness but isn’t too bad when working outdoors and features a similar LED layout as the FM2n with a plus, minus, and circle symbol that illuminate, green for the circle and red for the + – marks. The film advance has a tremendous short throw but does feel a bit flimsy but not enough to make me scared of breaking it, and the shutter has a satisfying feel and sound. Overall, it’s not a bad camera to take out, but it wouldn’t be my first choice.

Experiences
Well, the camera is undoubtedly plastic fantastic. Although the FM10 looks like a Nikon, it certainly does not feel like a Nikon. Don’t get me wrong, the camera itself is functionally a surprisingly friendly camera to operate. The controls are well laid out, and the camera is lightweight, making it a perfect camera to carry around all day without feeling overburdened. It’s also well balanced, even with the heavier optics installed on the front. But it can also give you a false sense of security; this is not a camera I would want to drop as it would probably shatter. Operating the camera is an easy task; film loading occurs how you would do on any other 35mm SLR and loads quickly. The film advance acts as the on/off switch for the camera, so pulling it out will release the shutter lock. The biggest problem is how the meter activates; while you can use the traditional half-push on the shutter release, it takes a bit more force to bring the release down to that half-push; I accidentally tripped the shutter once. It’s easier to use the meter activation button on the lens mount, easily accessed when holding the camera. While not as bright as other cameras, the viewfinder offers a decent experience; having the LED readouts for over/under/correct is excellent, plus the symbols themselves are illuminated, so working with them in low light is easy. Plus, you’ll know you have the proper exposure with the green illuminated circle.

Optics
The one thing that makes the FM10 an okay camera to use is that it takes the Nikon F-Mount; it would seem rather odd to have a Nikon branded camera that mounted Pentax lenses! The FM10 will accept any AI lens in the Nikon catalogue, including AI, AI-S and AF Type D. Although I find that the dedicated manual focus lenses work best on the camera. Plus, having that F-Mount allows for plenty of third party options. And while the lens mount on the camera is metal, I found that when mounting and dismounting the lenses, it seems a little stiff, almost plastic, and if I applied too much force, I would break something. Probably the camera, my Nikkor lenses are sturdy optics, and it would take a lot to break them. From what I’ve read, the camera originally shipped with a kit lens, the Zoom Nikkor 35~70mm 1:3.5~4.8, a classic optic that dates to 1979, with early versions shipping with the Nikon EM and Nikon FG. The lens that shipped was built specifically for the FM10 and FE10. Although the source of that lens remains a mystery, I’ll tend to lean towards that the lens is OEM Nikkor glass, not Cosina. While you can pair the camera with your range of Nikkor glass, the form factor does lend itself to the Series E set of lenses. And before you dismiss the Series E, there are some dogs in the lineup, but some true gems. It also will pair well with Cosina-Voigtlander SL II line of lenses.

Lowdown
Despite having no Nikon heritage or linage, the FM10 does get dealt a bad hand from the start. However, this downside can be seen in a positive light. There is nothing wrong with the Nikon FM10; it is a well-made manual camera that I found a rather enjoyable camera to shoot. Sadly, like any camera that ends up in the hands of a celebrity, the prices on the used market for what the camera is have jumped. But these are entirely bonkers; most fees for a camera body and a lens run between 150-180$, and without a lens, they’re between 80-130$, so if you have F-Mount lenses that work, you won’t have to spring for the higher prices. There are, of course, larger kits and cameras that have the original boxes, manuals and other accessories that run at 200$ and higher. But if you’re looking for a bit of workhorse to introduce someone to photography and working with a metered manual camera, then an FM10 won’t be a significant investment. Or if you’re like me and want a camera that is a bit of a beater that if it dies, you aren’t screwed out of a bunch of money as if you dropped your FM3a.