We all know the Christmas season can be tough on the bank account and the credit card statement. And shooting film, processing film, and getting equipment can be hard and hard on the bank account and credit card statement. But we want to show off that you don’t need to get the expensive equipment to get good results from your photography. So to kick off season five, we’re going to show you some cameras and some film that give you the most bang, for your buck.

Fujica ST605
A recent camera that came across Alex’s Desk, the ST605 is certainly a camera that matches the term budget camera. Not only that it performs beautifully with match needle metering, standard SR44 batteries, an M42 lens mount that can use even Zeiss glass, but the Fujinon lenses are nothing to scoff at. Not to mention you can pick up a body and lens for 70$ and use the rest of your money on film! 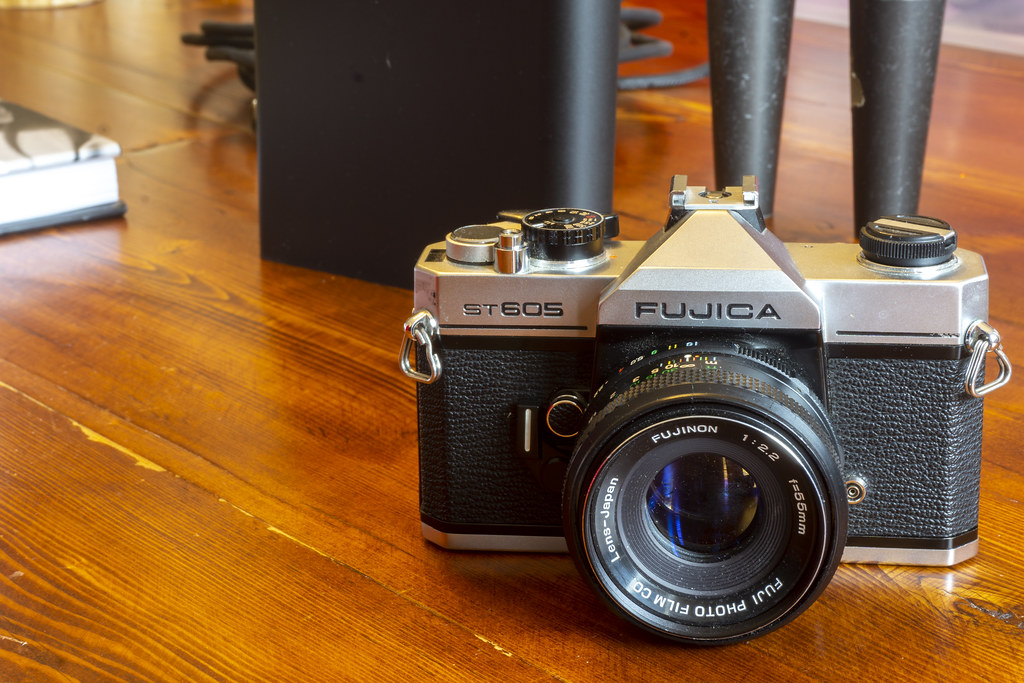 Pentax Spotmatic
There can be only one Spotmatic, an icon from Asahi/Pentax and a camera that was among the first to use TTL Spot metering. You can have one for a song, and with the M42 mount have access to a plethora of amazing lenses, not to say the quality of the Takumar glass that they are famous for. And while we can’t dive into this rabbit hole now, look for a proper deep dive into the Spotmatic system and lenses this year!

Don’t let the plain packaging turn you away, Ultrafine Extreme is an amazing film in both the 100 and 400-speed options plus it comes in 35mm and 120 options. The Extreme range of films are a classic grained film that offers sharp images, push process well, and are fine grained. We’re not 100% sure where the film comes from, but sometimes it’s best not to ask. While ordering online from Ultrafine’s Website can pose some difficulty for us in Canada, at Downtown Camera you can get a roll of 35mm in 24-exposures for 5$, what’s not to love about that!

Once a photography company in it’s own right, Kentmere is now part of the same family as Ilford Films under the umbrella of Harman Technologies. Originally designed as an export film, Kentmere now fits in a more budget-friendly option. While a little too grainy for some of our tastes (especially the 400-speed option), Kentmere 100 is a beautiful film. Sadly it’s only available in 35mm format.

If you haven’t heard of Svema film you’ve probably never listened to the Film Photography Podcast! Properly, Свема the names comes from mashing up two words, Светочувствительные Материалы, translated means Photosensitive Materials. And they are probably one of the best-kept secrets in film here in North America. From their standard line of Foto films, in 100, 200, and 400 were the first. But they also have a beautiful colour film in Svema 125 with a lovely pre-WW2 colour pallet similar to early Agfa films. Not to mention their slow film options in MZ-3 and FN64. All available here in North American from the FPP Store.

Kodak Gold
Another sleeper film, Kodak Gold while a consumer film is pretty incredible as a film. While most people would gravitate towards Kodak Max, a 400-speed option. Kodak Gold is available in both 100 and 200 ratings and is more than enough for most people and that is because it has a fairly wide latitude or range for forgiveness inherent in most consumer films. Not to mention it can be had for the cheap and often at stores like Walmart or Drug Stores.

Bulk Loading
Probably the best way to save money is to bulk load your own film. That means buying film in spools of 100-feet and self-rolling it using a special loader into reusable or recycled 35mm cassettes. While films like Kodak TMax and Tri-X are still fairly pricing on the bulk roll size. You can pick up Ultrafine Extreme, Kentmere, and Svema in bulk rolls. There are several loaders on the market, both new and used. And while you can save money on a used one, just make sure it’s from a trusted source and all the light seals are intact. Still, it’s best to do the actual loading in subdued light or if comfortable enough in darkness. If you’re just starting out, spend the money and get a new one. In fact, from the FPP Store, you can get a kit to get you started that includes a loader and 10 empty recycled cassettes. Bulk loading means you can control how many frames you put into a cassette, so if you’re testing out a film or a camera you can just load up 10 frames, or go to the full 35. Just make sure you don’t roll fat, all developing reels can support up to 36 exposures.