We’re back on a large format kick just in time for spring to arrive here in Southern Ontario! So today, Large Format Strikes Back!

Linhof Master Technika V
When it comes to precision in large format you don’t get any better than a monorail camera, but what if you could get that same level in a more compact form. Enter the Linhof Technika line of cameras. These are a hybrid of the power of movement you get with a monorail camera in a package similar to a Press Camera. You get every movement in both your front and rear standards and not just any movement, properly geared so you can perfectly set exactly what you want, no guessing here. The camera can take all the standard 4×5 lenses mounted on a Technika Board. You can use both the ground glass or rangefinder (if so equipped) to handle your focusing, plus you can also mount a roll film back to use 120 format as well as your standard sheet film holders. 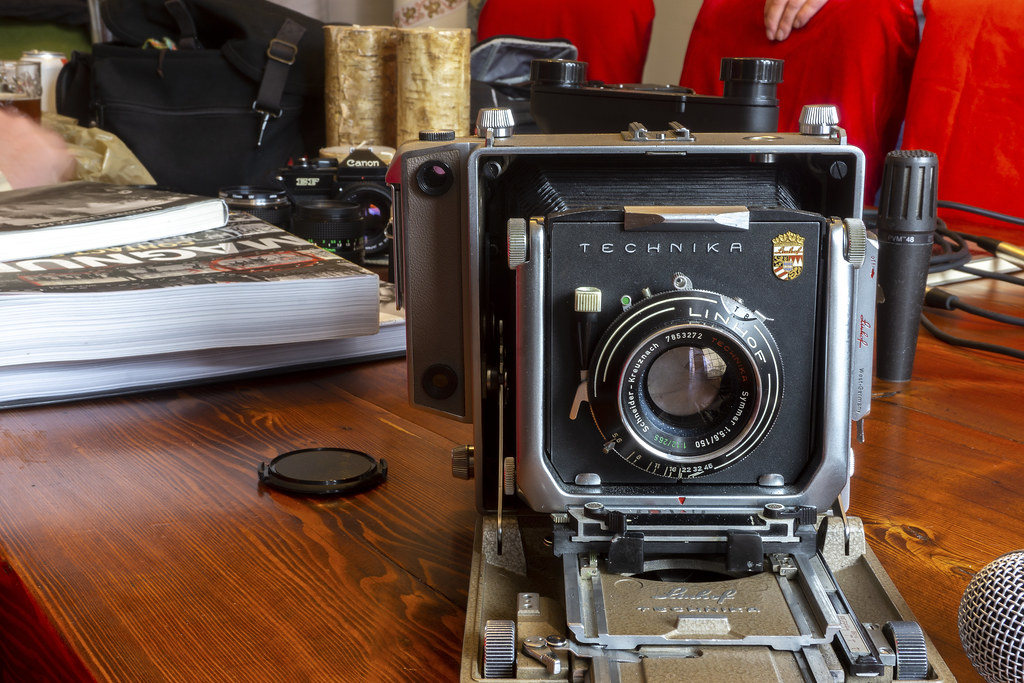 Stearman Press SP-445
Back in January 2016, we interviewed Tim Gilbert, the man behind the SP-445 compact daylight developing tank for 4×5 film. The tank can develop four sheets of 4×5 at a time with about 500mL of chemistry at a time. While most of us around the table has an Mk.1 version which has the solid versions of the sheet mounts, which were known to cause streaks on the final sheets due to chemistry flow issues. But Alex has not encountered that in any of his developing. The issue has since been fixed with the Mk.3 holders, which you can buy as a separate product. A full kit will only run you 87$ (USD) which is far cheaper than a Jobo system or even a MOD54 not to mention using so little chemistry. It does make it easy to develop decent numbers of sheets, four at a time. And the system just works.

For Alex, it just makes sense if you don’t want to spend the money on a Jobo System or worry about sheets falling out of your Mod54. And when you can get 8 sheets of film done in two developing cycles that’s a winner!

Why Not to Shoot Large Format
Like many things in the photographic realm, there is plenty of polarisation on many subjects. Among them in Large Format, those who like it, love it, those who don’t, see it as a waste (sometimes) or just impractical. Well, here around the table we have several true believers. However, John and Bill both share why they stopped working with large format and why they don’t see it anywhere in their future.