How do Developers Work?
Before you can get into the actual developers, we should recap how developers and black & white film photography works anyways. We’re going to put on our lab coats and try to explain this process as simple as possible. Black & White film is made up of individual crystals, the crystals are known as silver halide (2Ag+Br–) is made up of a positive silver ion and a negative bromide ion. These crystals while theoretically would be perfect, in reality, there are small imperfections in each crystal. 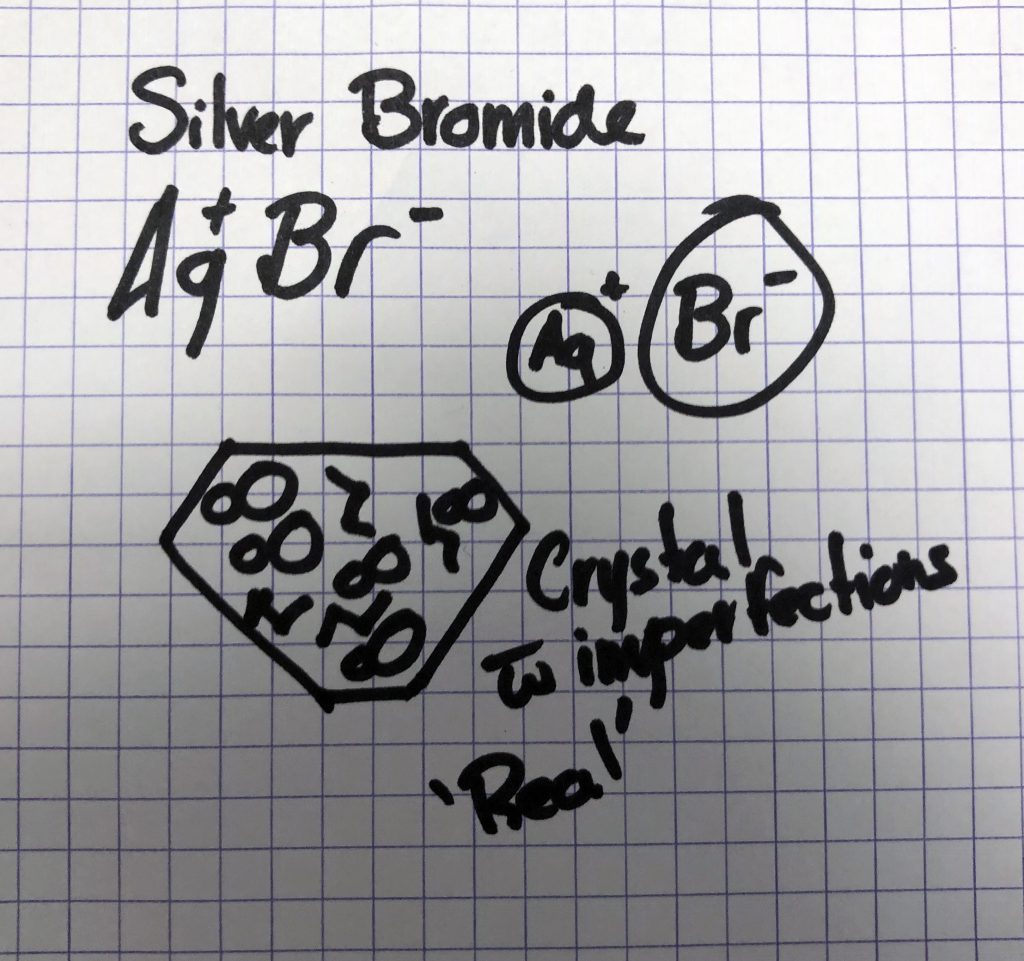 The crystals are naturally light sensitive, however, when they are bombarded by photons (light) the bromide will boot out one of its electrons. These electrons stick in the imperfections this attracts the silver, darkening the crystals. This forms a latent image. 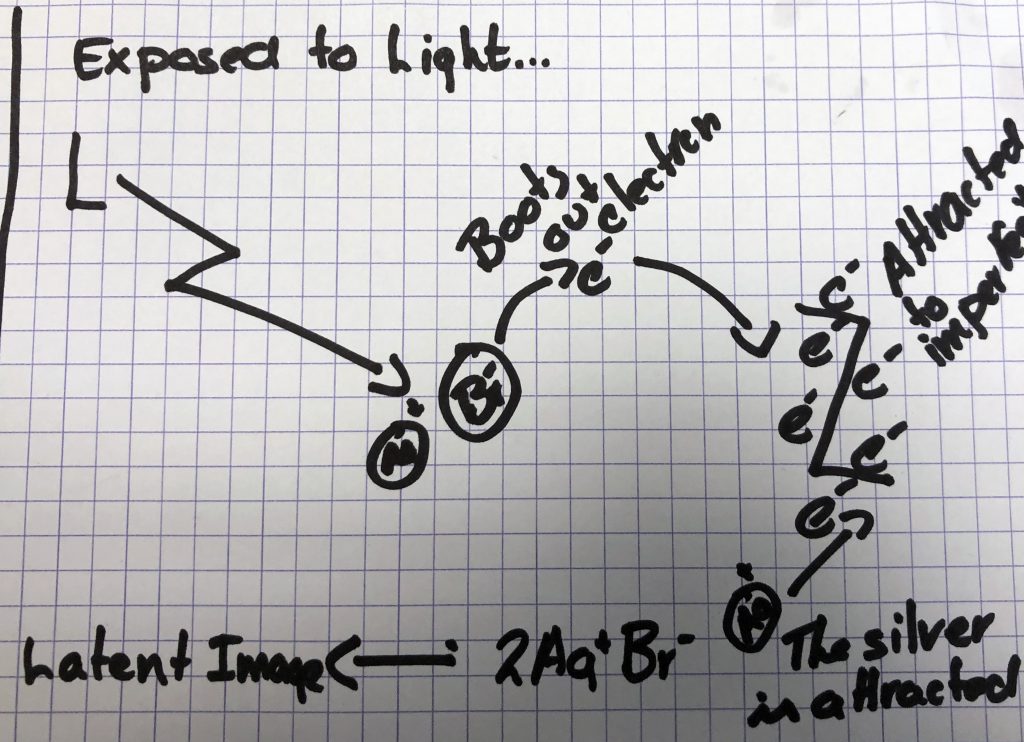 The next step is to turn the latent image into a permanent image, through means of reducing the silver halide into metallic silver. This is done through a reducing agent, which we commonly call a developer. The most common of these is metol (elon), however, there are several others including hydroquinone, phenidone, p-aminophenol, glycine, pyrogallol, and catechol. Additionally, there’s an additive to help give the developer an Alkaline pH balance, this is done through Borax or Sodium Hydroxide. Not to mention other additives to help prevent oxidization, or reduce base fog such as Potassium Bromide that acts as a restraining agent.

Because the developer works in an alkaline environment the fastest way to stop the actions of the developer is to turn the solution acidic, this is done through a chemical stop bath, but you can also just use water to dilute the developer so much in just has no energy left to keep working. However, at this point, there are still unexposed and unreduced silver halide ions on the film. We call this step fixing, because it permanently fixes the metallic silver, washes away the unexposed, yet still light-sensitive silver halide, to the film base. The usual chemical that takes care of this action is Sodium Thiosulfate (Na2S2O3). The Fixer will turn the silver halide into a water-soluble solution which you can then wash way using an archival wash, such as Kodak Hypoclear, Permawash, or the FPP Archival Wash. Followed by a water wash.

Of course, you could go on for hours on the science behind black & white development but we just wanted to ensure you had a base knowledge to understand how some of the developers work and the chemistry that goes into them.

Kodak D-76/Ilford ID-11/Kodak D-23
We cannot get into D-76 or ID-11 without first talking about D-23. When it comes to developers it doesn’t get much simpler than D-23, the developer contains three ingredients, Metol, Sodium Sulfite (Anhydrous), and Water. It is a slow working Developer that has some compensating characteristics. But in this 1920s Kodak released D-76, which is the developer everyone starts with. D-76 improved on D-23. The addition of hydroquinone, which acted as a supercharger for the metol, and Borax to improve the alkalinity of the developer. As a developer, it does a solid job on most films, and can also be used to developer paper. If you’ve done home developing there’s a good chance you started with Kodak D-76 or Ilford ID-11, which is identical to D-76.

Kodak Xtol
Introduced in 1996, Kodak Xtol remains the final developer invented and released by Kodak for Black & White Film. It also is the first developer that used something other than hydroquinone as the developing agents. Xtol ran with Phenidone and Ascorbic Acid and the developing agents, to reduce the toxicity and make it more user-friendly. It also gave Xtol the capability for producing sharp fine-grained images even in faster films and did wonders for push-processing. However, there are drawbacks, first is that it does not perform well at high-dilutions, best to stick to 1+1 anything higher can cause failure, in fact, the highest dilution we recommend is 1+2. Second, being that the developer will just die, suddenly, and also you do need to mix up at minimum a 5L packet. Now, they did produce a 1L packet, but these suffered from stability issues so they were pulled from shelves shortly after release. Now you can store your 5L mix into 1L bottles. But it is important that you should treat Xtol as a one-shot, even when using stock dilution. Trust us, you won’t regret it when you pull out a blank strip of film when you develop it in Xtol you don’t remember when you mixed it up.

Kodak TMax Developer
Like the film of the same line, Kodak released their TMax Developer in 1986 and was the first developer released by Kodak since HC-110. A moderately active liquid developer which promoted high-quality images and excellent shadow detail. Designed to work perfectly with T-Grained film, but could produce excellent results with any continuous tone films. Designed to be a one-shot developer at either 1+4 or 1+9 dilutions, Kodak did release a variant, TMax Developer RS that came with a replenisher and they also had a TMax Slide developer that turned TMax films into black & white slides. Although the Slide and RS developers are hard to find these days. TMax developer also because of its semi-active nature works well as a compensating developer and does a decent job when push processing.

If you want to hear more chemical talk, you can tune into the Negative Positives Podcast Ep. 239 where John, James, Bill, and Alex join Mike and Andre to discuss more about developers, stop, fix, and washing. Don’t see the developer that you use, well tune into Part Two where the team tackles HC-110, Rodinal, and Pyrocat-HD!