Ektar 100 is one of my favourite colour films, and that’s saying a lot because I don’t shoot a lot of colour film. But when it comes to Ektar 100, it is the first of many ‘new’ colour films to come out of Kodak since I first started shooting film. The name itself, a historical word in the Kodak Dictionary is an acronym for Eastman Kodak TessAR the lenses produced between 1936 and 1962 and I own a 203mm Ektar which I still run on my Crown Graphic. Then it became a line of professional films rated at 25, 100, and 1600 starting in 1989, but Royal Gold in 1997 would replace it. I have shot the old Ektar 25 once. And then Ektar went away, but in 2008 it returned in its current form and started the ball rolling on a film resurgence at Kodak which today has seen the return of Ektachrome E100. But E100 is a review for later this month! With rich colours and a look that for me is the closest thing to Kodachrome in a colour negative film, Ektar 100 is certainly my choice when I’m out travelling and want a good colour film! 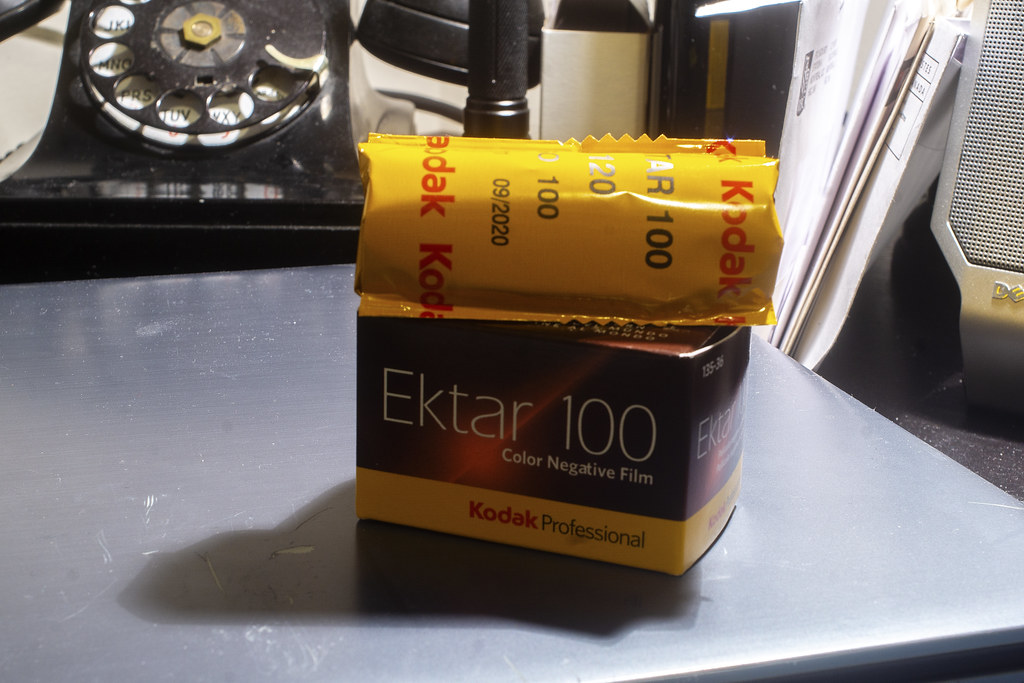 Colour Redition
Ektar 100 loves colour, perfect from the late spring through the fall. Everything is far more vibrant on the film than it is in real life giving the appearance of almost a hyper-reality. And while it is not as contrasty as Fuji Velvia, but it certainly leans closer to Kodachrome 64. But Ektar 100 doesn’t just pick out one colour it brings all the reds, greens, and blues into sharp focus. And while the film performs well in almost every lighting condition, it loves the bright sunlight because you get the maximum colour saturation and rendition. Even in overhead light like high-noon you get amazing results.

Image Quality
When it comes to image quality, Ektar 100 has it in spades. Honestly, I remember my early days shooting consumer film and thinking that it was good quality (mostly rebranded Fuji or Kodak stock) for the price point. But when I first saw the Ektar negatives, I knew that I could probably never go back to the consumer stuff and relegated myself to being picky when I shot colour film. Ektar 100 images are sharp and fine-grained. Each colour renders well, and the contrast is natural, nothing too punchy. And this quality extends to any format from 35mm up to 8×10, although the larger the format, the finer the grain will be, when you have fine-grain at 35mm it is near invisible in large format stocks. Being a colour negative film blesses the film with a good dynamic range, I found that I didn’t lose anything in my highlights and shadows so even in uneven light, I still had shadow detail and blue skies.

Scanning
Scanning colour is always a difficult task. However, Ektar 100 is not a terrible film to digitise either with lab scans or your scanners. Now in my case the two rolls I shot specifically for this review was scanned on an Epson V700 (Rolleiflex) and a Nikon Coolscan V ED (F5). Both scanners did a superb job on the film. Like many Kodak films the scans do lean towards the magenta cast, but running it through Photoshop’s Auto Colour will swing it into the Green, but Auto Tone will bring it back to a happy middle. I didn’t need to go in and manually fine tune the images. Also, there were no coloured artefacts in the scans either, at least nothing of note that couldn’t be removed using the noise reduction filter in Photoshop. In general Ektar 100 is an easy film to scan at home.

Overall Impression
I like Ektar 100; I’m glad that after setting colour film aside in favour of mostly B&W stocks I started back up with Ektar 100. In both cases it made the world look almost exactly as I saw it through the viewfinder, and in many cases it made the world look better and brighter. It also made me look at the world differently. I actively looked for colour in my shots, not just contrast. It made me realise that so much of the areas where I tend always to shoot are full of colour. And while I don’t shoot the volume of colour to maintain home colour processing, I know that even in my little more cavalier developing methods Ektar 100 will shine!