Back in 2005, I was an avid attendee of the Presbyterian Young People’s Society (PYPS). Through the inspiration of fellow photographer and brother-in-Christ Rob Ellis, I started taking a camera to these events. It was through PYPS that I began to this wild journey as a photographer. But back in 2005, digital proved out of my price range, so I rocked the film. And on a whim, I picked up a roll of Ilford XP2 Super from my local Foto Source Store. I was super excited to have gotten a roll of black & white film. My parents were less so, wondering where I could get traditional black & white developed! Thankfully the lab told me they could process the film as it could be done in the usual C-41 minilab. XP2 went on to be my go-to black & white film from solo trips to Toronto, exploring abandoned buildings, and yes even PYPS. Once I started shooting seriously, I switched to traditional B&W films and of course began to process my own B&W in 2012. There is something oddly satisfying about Chromogenic B&W it makes the format readily available to a more significant number of people. Who don’t have to invest in the developing equipment or send it to a dedicated photo lab. Besides XP2 is the C-41 B&W that survived, unlike the offerings from Kodak and Fujifilm. 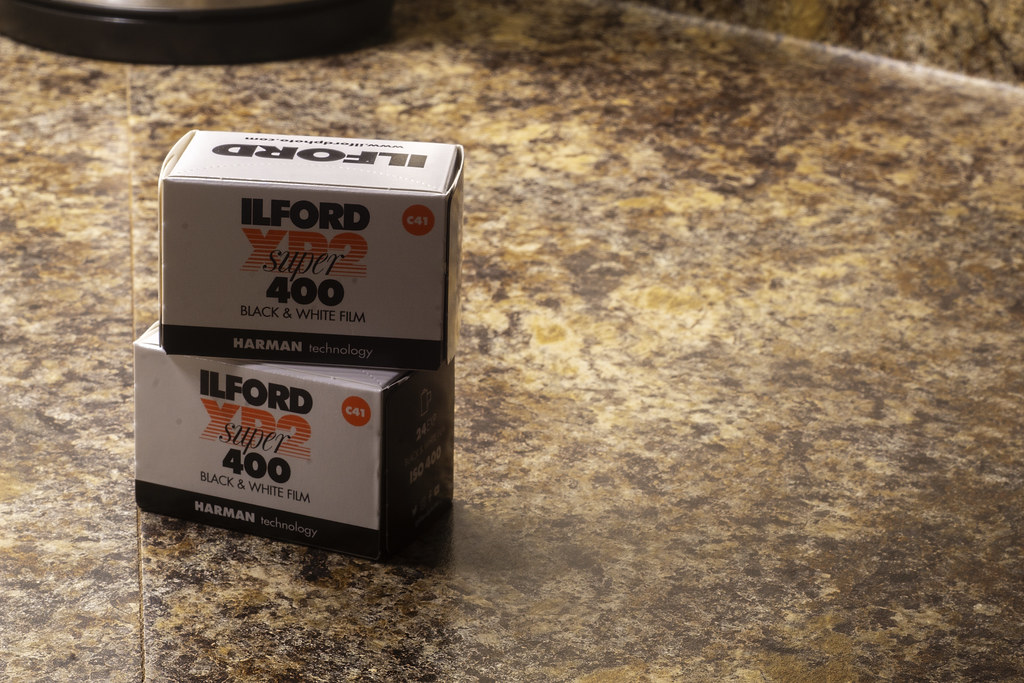 Colour Rendition
One of the best parts about XP2 is that despite being a colour negative film, it behaves like a traditional B&W film, in the sense that it is fully panchromatic. What I mean is that it renders colours faithfully in beautiful shades of grey. Delivering a clean medium contrast with smooth tones throughout with clean whites and dark blacks. Like a well processing black & white film, it makes the world look like it should in black & white plus responds properly to the standard set of contrast filters (Yellow, Orange, Red, Ect). While you are a little more limited in how it gets processed, it’s fairly consistent.

Image Quality
Where XP2 shines is in the image quality it outputs. Ilford certainly got it right here, with decent grain structure and amazing sharpness right off the scans. And while there is grain, I think the Coolscan V amplified that, it isn’t too bad, and adds to the dimensionality and sharpness in the film itself. Not to mention XP2 is pretty darn close to being a traditional black & white film in every other aspect, with the amazing tone and contrast without having to play with it too much in post-processing.

Scanning
Scanning a film that is both colour negative and black & white can cause some troubles. You’re fighting with colour casts if you’re like me and scans everything as a colour scan, yes even my traditional black & white films. There is a certain colour that comes with scanning XP2, often a greenish tone or a deep yellow or light orange. Which in many cases some people enjoy and leave it as is, I however always desaturate. One of the best parts is how sharp the film scans in natively, I hardly have to add any additional sharpness, and the levels are dead on the money. There are some chromatic aberration and artefacts, but these are easily smoothed out in post-processing.

Overall Impression
I would highly recommend this film to anyone who wants to give B&W photography a try without needing a pro lab or your equipment. And while XP2 doesn’t have a place in my workflow anymore. It certainly is a film that I keep in the back of my mind if I ever have to stop processing at home for some time and still want a B&W film to work with and farm out to a lab for processing. Not to mention in addition to being available in 35mm you can also get it in medium format. Plus it is readily available at most dedicated photography stores and online sources.