When it comes to game-changing cameras there is nothing more iconic than the Olympus OM-1, it ushered in the small format for the SLR world, and not to be outdone by Olympus, Pentax released their versions of the small SLR, the first two being the MX and the ME. But the ME had a lot of limitations including the lack of a manual mode, enter the ME Super. I’ve had both a ME and ME Super come through my collection in the past, one went to a friend (not sure if she still uses or even has it) and the ME Super met its end at the bottom of a grain silo at the Canada Malting Company’s Toronto plant. I was rather pleased when this one dropped into my lap recently although I will admit it did sit on the shelf for several months before I took it out and remembered what a joy they are to use. When it comes to the small form factor, it is an excellent camera that is one of my favourite Pentax cameras to use. 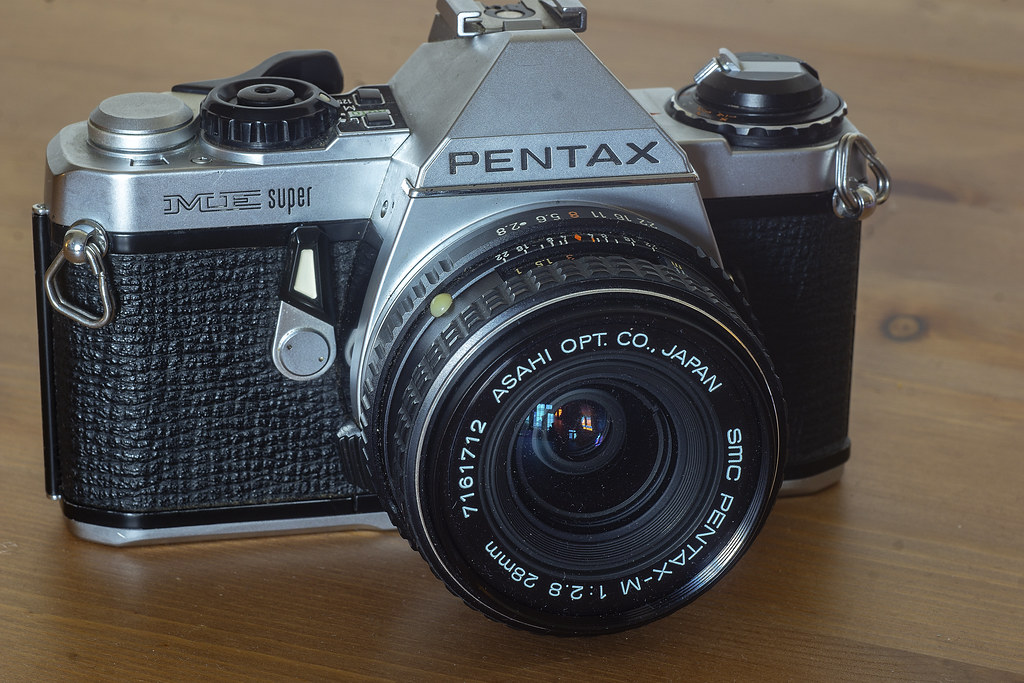 Background
As I eluded in the opening paragraph, the M-Series of cameras from Pentax is a direct result of the 1972 release of the Olympus OM-1. The original ME saw release in 1976 along with a mechanical cousin the MX. Pentax also released their smaller Pentax-M line of lenses. While the OM-1 was small, the ME provided to be even smaller, but not by much. The ME was aimed at consumers, with no manual control and only semi-automatic aperture priority functionality and a 1/100″ sync speed and mechanical override. The MX was a smaller form of the iconic K1000. To address the shortcomings of the ME, Pentax released the ME Super in 1979 with the camera hitting the market in 1980. While the same as the original ME, the ME Super would be only a fraction taller, so even at a glance, you won’t be to tell the difference. The ME Super introduced several differences to the older model, first off it allowed for metered manual mode with an LED shutter speed display inside the viewfinder. Also, it increased the top shutter speed from 1/1000″ to 1/2000″ and increased the sync speed and mechanical override to a more common 1/125″. The second contact was also added to the hot shoe for dedicate Pentax flashes. Since the ME Super was a camera of improved spec, Pentax also released a lower-spec model, the MV at the same time. The only variant of the ME Super is the ME Super SE (Special Edition) a chrome finished with brown covering and a diagonal split finder. The ME platform proved popular enough that Pentax used it to produce the first Autofocus TTL SLRs on the market, the ME-F. The ME-F used a selector switch and a dedicated AF Lens. Production of the ME Super ended in 1986.

Impressions
Yes, you will notice right off the bat how small the camera is it is smaller than the OM-1. What surprises the most is the fact that there are no major knobs on the camera, the only adjustment knobs deal with the film speed and EV adjustments. Two buttons adjust film speeds up near the film advance and shutter release, and they are tiny, so it makes it hard to work with larger fingers. Another difficult control to operate is the mode switch. But the important part is that the camera has a dedicated single switch to adjust how the camera functions. From the Lock (which is also off) to automatic, manual, a 1/125″ mechanical override, and bulb mode. But when the camera is functioning in automatic (which is aperture priority) the knob is locked in place, and it’s difficult to get the lock release pushed and turn the knob at the same time. But any big shutter speed knob would look a little out of place unless placed on the front of the camera which would change the whole look. Don’t let the small form factor scare you; the ME Super is a great little camera to carry around with little effort, I was carrying it through Chicago without a strap just by the lens barrel without any difficulty. Although I do recommend a good strap for simple security.

Experiences
The ME Super is a camera you can use without knowing you’re carrying around a camera, it’s light but delivers a fantastic image. That said, it’s best to run it in automatic mode as the tiny buttons that adjust your shutter speed are difficult if you have larger hands. They’re small and tucked up by the prism. But for the most part, working in automatic is why you have a ME Super. The one thing that stands out as odd is the film loading, you sort of slide the film in-between these plastic rollers on the takeup spool. If you’re using a thin base, it slides in fairly easily, but thicker bases you might have a struggle. When it comes to speed, you can operate the ME Super pretty quickly, the film advance throw is one of the of shortest I’ve worked with, and you can move through a roll of 36 just as quick with a manual advance or the optional motor drive. The viewfinder isn’t the brightest, but the LED dots next to the film speeds make it easy to operate in low light, and the traditional split finder makes manual focus a breeze. In an interesting aside, the ME Super would be used as a platform for Pentax’s first attempt at an autofocus camera. Having a dedicated off position helps keep the battery power conserved as unlike the K1000, the camera is all electronic. Although having a mechanical backup is helpful.

Optics
Here is where all Pentax cameras shine, the ME uses the K-Mount and can mount pretty much any lens. But if you want to get the full experience with the lightweight camera, it’s best to use the Pentax-M lenses specifically as they are designed to keep a low profile with the small form factor. And they deliver excellent results as well. Some of the best lenses are the 55mm f/2 and 28mm f/2.8 they are close to pancake style and work perfectly. But if you have a large selection of manual Pentax lenses, you can’t go wrong with a ME Super as they will pair well. And even if you have Ricoh glass, you have a solid choice of optics to run on your ME Super. I’m not a purist when it comes to K-Mount glass.

Lowdown
When it comes to Pentax SLRs, most people will gravitate to the K1000 or a Spotmatic and can you blame them? No, both are excellent cameras, with excellent track records. But these days a K1000 costs just as much as it did new or more (without counting for inflation). But a ME Super or even an MX makes for a less-expensive camera that gives you the same image quality as a K1000. They use the same lenses. You can get a Pentax ME or ME Super for less than 100$ these days and around 100$ for the Pentax MX. Not only are these cameras slightly newer, but they are also a little less popular than other Pentax cameras. Now I do have to say that because they are from the early 1980s and electronic they will eventually fail and the ME Super does require a battery. But at least they take only two common LR44 batteries which can be had for a low price from any camera shop or battery store. If the size doesn’t suit you, there is a motor drive that can be attached that has a beefy handgrip. My final say, the ME Super is a fantastic starter camera for anyone getting into film.