One of the first things that struck me as odd when I was building my A-Mount lens collection was the 50mm, after getting the two zoom lenses (35-70 and 70-210) I went for a fast prime and what lens collection wouldn’t be complete with the fast fifty while companies like Nikon, Olympus, and Canon produced their 50mm at f/1.8. Minolta, well they’re different they went with the f/1.7. But let’s not quibble over that, I just happened always to like the fact Minolta was different. And back when I was first shooting SLRs with an SR-T 102 I had the 50mm lens; in fact, I still use that first lens with my XE-7. But we’re talking A-Mount. Now the biggest thing within the realm of the A-Mount, do you go with the f/1.7 or the f/1.4? Many say the f/1.4 is sharper, but you’re also paying about 100$ more, and I haven’t made any comparison, but my budget would not allow for the purchase of such a lens, so I ended up going with the f/1.7. Now I had used the lens back when I reviewed the Maxxum 7 and found it a great lens. Plus they can be had for under 200$ putting it in line with the Nikon and Canon thrifty-fifty lenses. 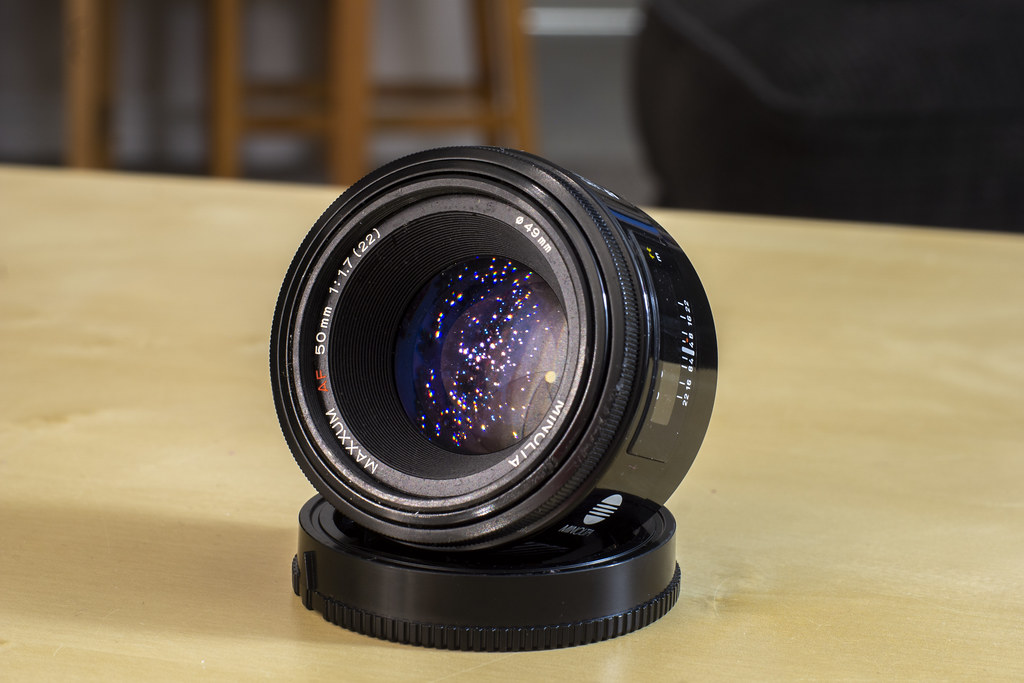 Build Quality
At first glance, you’d think the lens itself is made mostly of plastic, and while the external body is plastic, the actual mount and internal structure are stainless steel. However, don’t let the amount of plastic on the lens worry you, it helps keep the weight of the lens down, especially when using the lens on a heavier camera body. What’s nice is that no matter what camera you have, it mounted on, it adds a nice balance overall, and that’s with or without a battery grip. While it certainly has a small profile, it is certainly not a pancake lens. The lens mounts and dismounts easily and smoothly and clicks satisfyingly into place. The focus ring is a little small for my tastes but remains functional, and the focus scale behind the window responds well without being too delicate. And having the depth of field scale on the lens is handy. But you have to remember the camera and lens designed with autofocus being forefront. Optically the six elements in five groups are the standard configuration for most lenses of the focal length and aperture rating. And it has an older style coating but coated all the same. It does suffer a bit from lens flare but nothing too serious. One oddity I found is the built-in barrel lens hood that slides out from the focus ring, an interesting feature that does little to help with flare reduction. The lens itself takes the smaller 49mm filters which as a coming from primarily Nikon, I had to go out and get a couple of new filters for both the 50mm and 28mm Minolta lenses.

Image Quality
When it comes to this lens you get excellent quality on the images, no matter what aperture you shoot. While the images are best when shot between f/2 and f/16 there’s little in the way of fall off or vignetting even at f/1.7. The aperture blades produce a pleasing out of focus elements and if you get the right aperture and the right distance you can even get some swirl of these elements. I’ve only ever seen it once. The lens sweet spot is at f/8, and you do want to ensure that you’re focusing dead middle to get your whole frame in focus, as you see in the test images you are losing your foreground even at f/22. There is some barrelling with test chart, but I have a feeling that is due to having to print out a smaller chart and having some ripples in the mounting. Not to mention moving the camera in super close. This barrelling is not noticeable in the field tests. I find the lens produces sharp images and would pit it against images shot on the f/1.4 version any day.

Applications
Like any 50mm lens, these are great catch-all optics for any camera system. If you’re looking to get into an A-Mount system then the 50/1.7 is a great lens to start if you’re looking for an initial prime to go with a couple of zoom lenses. For low light photography, you get a fast lens without needing to spend the big bucks on the f/1.4 model, and you get a nice short lens that fits on every Minolta and Sony A-Mount camera and works well. Given the optical quality, the lens makes itself useful for portraiture with good subject separation with a narrow depth of field, and with an aperture that stops down to f/22 and little distortion you have an excellent landscape lens.

The Low Down
Despite the fact that these A-Mount lenses will work perfectly on Sony Alpha SLRs, the 50/1.7 can be had for a fair price these days. Many for well under 100$ but a good price would be between 80-150$ for a good condition version. And frankly, you don’t need anything more than the f/1.7 unless you love a big chunk of glass and are obsessed with sharpness. As a starter prime lens, you don’t need to look any further than the 50/1.7 and even if you’re only running a couple of zoom lenses and need that extra speed than get one. I reach for this lens more than most others in my Minolta kit it is just perfect for most of my work with the Maxxum 9. Plus you can use the lens with any A-Mount camera in the Minolta or Sony Alpha lineup. Certainly a worthy lens for any Minolta/Sony user.