One of the biggest mistakes I made was giving away my Nikon FM2n as a gift, thinking that I would be OK with the Nikon FA. And while these days to replace an FM2n is a costly endeavour, they have shot up in price since I bought mine. I have since come to terms that the only way to get an FM2n again is to have one returned as a gift. But what about an earlier model, the camera that you could say started it all? Released as a result of the OM-System, the Nikon FM ushered in a new age of Nikon built around a small SLR chassis. And you know, despite not having the same status anymore, the Nikon FM is the perfect mechanical SLR from Nikon and the perfect match for my Nikon FE. 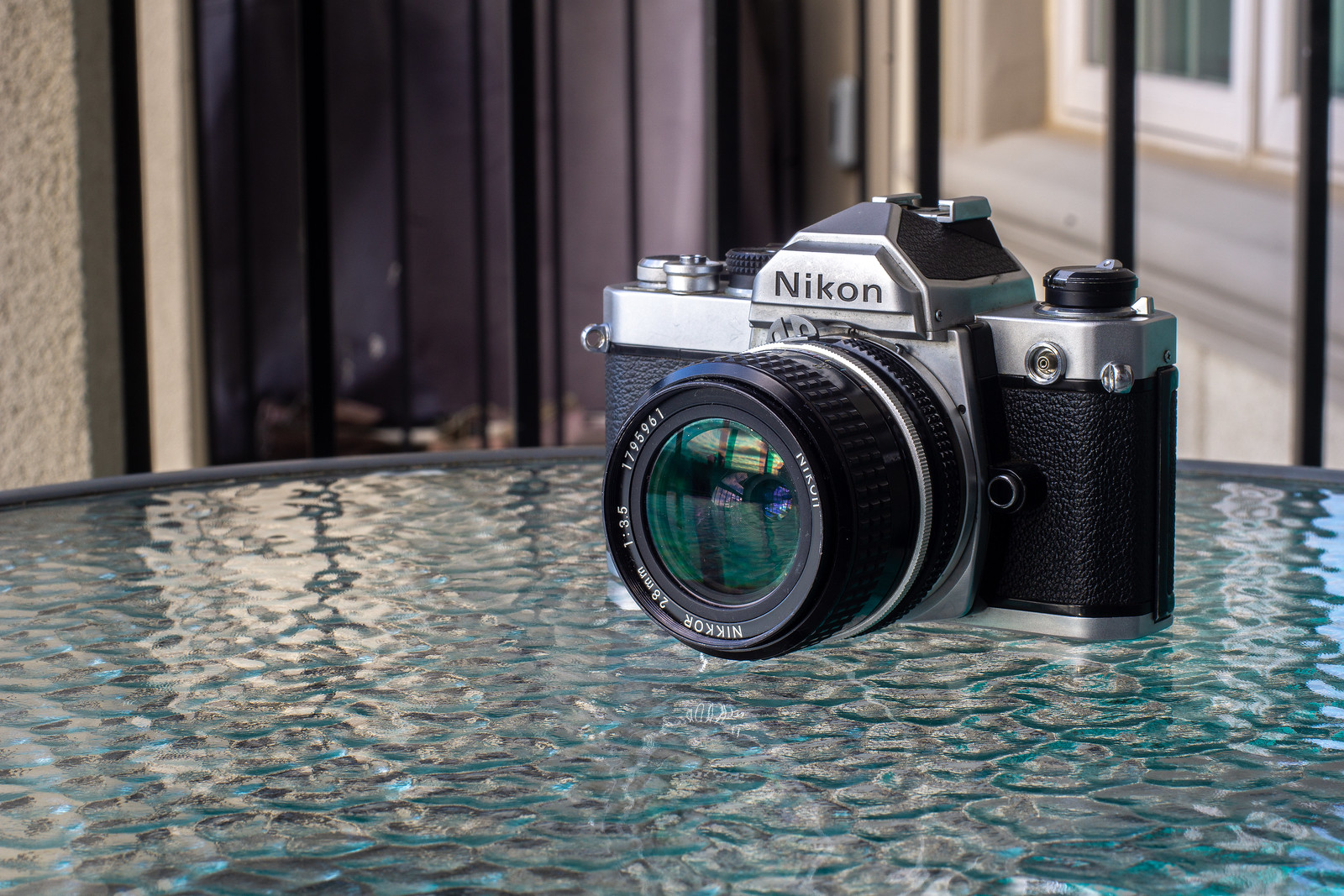 Background
Nikon managed to get something right when they developed the Nikkormat line of cameras in the mid-1960s that got the camera maker into the mid-range consumer market. Nikon designed the camera to meet the same exacting design and build qualities of their professional offerings with a few fewer features but could use the same lenses without any modifications. These cameras were truly products of their time, bulky, clunky, and built to serve as a personal defence weapon. But then in 1972 the Olympus OM-1 hit the scene and introduced the world to the small format system camera and all the other manufacturers scrambled to catch up. The Nikkormat line was far from small even the EL was not exactly compact. And with companies like Pentax, Canon, and Minolta catching up it was evident by the middle of the decade that Nikon needed to make a change. And for that they had a couple of recent changes, the first is the release of their new Auto Indexing lens system removed the need for a physical coupling to the camera using a claw. The first update to the almost twenty-year-old lens mount. Nikon would release a new meter for their F2 creating the Nikon F2AS to support the new lenses and then gave minor updates to the Nikkormat cameras with the EL2 and FT3. But it didn’t change the fact that the cameras remained heavy, bulky, and were essentially bricks. And here is where the OM system made its mark, Nikon had to produce a camera that could take on the OM. Nikon’s designer sat down and took the core qualities of Nikon camera and uncompromising industrial design and manufacturing and built a smaller chassis, taking advantage of smaller internals. At the core is the robust Copal Square shutter one of the best shutters in the photographic in the day. Keeping the classic 60/40 centre-weighted TTL meter but updated the CdS cell with a pair of gallium photodiode cells. Nikon also did away with the match Needle system going with a set of LEDs. The FT3 continued to see limited sales, but the new FM soon proved to be popular. Nikon produced but never sold a gold plated variant. Nikon would improve on the mid-range cameras releasing the Nikon FM2 in 1981 which got a moderate update with the FM2n. But the small-chassis design would become an icon among Photographers and last well into the 21st Century with the final camera being the Nikon FM3a and even remain as an inspiration for the Nikon Df.

Impressions
Nikon certainly got it right when they designed their small-format chassis. If you’ve ever used any variants of the small format (FE/FM2(n)/FE2) then the FM is going to look rather familiar, and other than a few minor differences the FE and FM are almost identical twins. There is a wonderful simplicity a blending of the Nikkormat and Pro line of SLRs also a significant reduction in size. The two major differences between the FM and the FE is that the collar around the FM is chrome other than black. Also on earlier versions, the collar acts a switch to allow for the FM to support both the original MD-11 drive and the updated MD-12. This particular camera is the later model that had MD-12 support automatically without the need for the switch. The second difference is the film speed selector is part of the film speed selector rather than around the rewind knob. The other difference is in the viewfinder, the FM using a three diode system that you adjust film speed and aperture to get the middle diode to light up. You also get full feedback on both your shutter speed and aperture. While the camera itself is fairly light, adding a lens does add to the overall weight and in some cases a fair amount of weight. A Series E lens would not go amiss. Like all Nikon cameras, a quarter pull from the film advance will power the camera on. But the camera is fully mechanical so you don’t need batteries for full functionality, the batteries only power the meter.

Experiences
The FM is a joy to work with, a joy I had forgotten until now. As Nikon puts it, pure photography. Functionally working with an FM is no different from any Nikon camera up to that point. Since the layout is similar to that of an FE or F2 if you have used either of those getting an FM up and running is a walk in the park. The film back opens easily but there is a lock that prevents you from just pulling up on the rewind knob. To set your film speed, pull up on the shutter speed knob and then rotate the knob. The viewfinder is decent and the split prism is large enough so that focusing is easy. While not the brightest in my collection, it does the job. Plus there’s enough feedback for your shutter and aperture to help with setting your exposure. The biggest problem I have is the readout for the meter. It reminds me of the Zenit 122K with only three diodes that are next to printed symbols + O -, adjust your exposure until the middle dot is illuminated. The only trouble I see is that in low light such a system is hard to read. Thankfully they fixed that on the FM2(n). The film advance is lovely and short, so even without a drive, you can shoot quickly. I was initially concerned about the exposure metering on the FM, the meter on the FM2n is super sensitive, but I figured the FM being an older camera might not have the same sensitivity. Both use different metering cells (Gallium Diodes on the FM, Silicon on the FM2n), but my concerns were quickly tossed aside. Even when I was shooting with a 1/3rd stop under in about 85% of the images, all the frames were beautifully exposed. Rewinding and unloading also an easy task, no hitches there. Mounting and dismounting the lenses is no problem and even adjusting the mount to accept non-ai glass is straightforward.

Optics
The Nikon FM takes full advantage of aperture indexing from lenses. Which means you have a wonderful range of optics including converted, AI, and AI-S lenses with full open-aperture TTL metering. This compatibility also includes the AF Nikkor Type-D lenses. Of course, if you do want to stick to a smaller format, then the 50mm f/1.8 pancake lens is a good option or if you aren’t too much against them, you can always go with a Series E lens. But that’s not all because the FM came out at the same time as the AI lens system that removed the need for the claw coupling. The FM provides support for non-AI lenses. Simply press down the plunger on the lens mount and flip up the follower and your Non-AI lenses will mount without damaging the camera. The downside is that you are forced to use stopped down metering. But even then, you don’t have to use the camera’s internal meter, something like a Revini or similar Hotshoe mounted meter will serve you well. The only problem is that the already dim screen will make focusing difficulty when you’re stopped down.

Lowdown
The Nikon FM is seriously one camera that I would always recommend, it’s near bulletproof, has an amazing meter, and will always work no matter what situation you put the camera into. Of course, you don’t just have to go with an FM, the FM2 and FM2n are both excellent choices. However, the FM2n fetches a high price on the used market these days, 300-600 dollars, the FM you’re looking at 70-200 dollars, and often you’ll get a lens in the deal. So, in the end, it all comes down to how deep is your pocketbook? The addition of a motor drive is also a plus, I do recommend going with an MD-12 over the MD-11. The MD-12 is better on batteries and has an On/Off switch. And while I do still regret letting my FM2n go, that regret is made a little less with the Nikon FM on my shelf. Plus it is the perfect twin to my Nikon FE and both look stunning in their DueNorth leather camera straps.

Further Reading
Don’t just take my word on the Nikon FM, you can check out the reviews by other awesome camera reviewers!
Casual Photophile – The Nikon FM is all the 35mm camera you need!
Lomography.com – Classy and Classic: The Nikon FM
Photographic-Hardware.info – Nikon FM Review