If you think you’ve seen this camera reviewed before you would be right, after a fashion. The Polaroid 600 SE is a variant or derivative of the Mamiya Universal. While not an exact copy of the Universal, the 600 SE is designed to only accept Type-100 Pack Film rather than a choice of either Roll Film or Pack Film, and because of this only uses three lenses from the entire Press lineup due to the required image circle for the larger film size. Sadly it does retain much of the awkward functionality of the entire Press lineup but I figured I should give it another crack, at least this time I’m going into the review with a better idea of how to handle the camera. Thanks to James Lee for loaning out the camera for review and providing a pack of Fujifilm FP-100c. 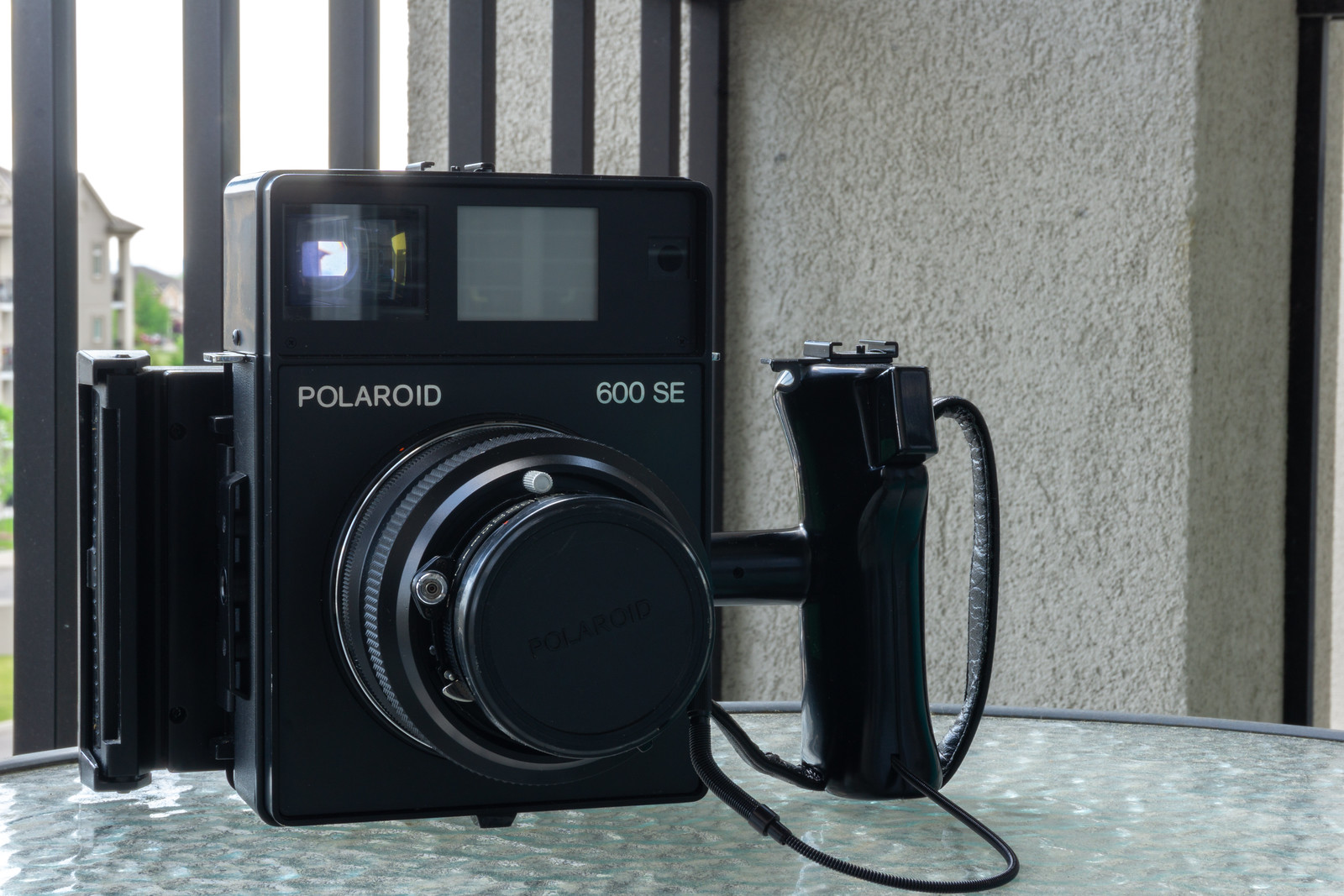 Background
The whole series seems to be a strange departure from the common elements of Mamiya cameras. Mamiya is among the younger camera firms in Japan, founded in 1940, it produced a single camera the Mamiya Six before Japan entered World War Two by attacking the American naval base at Pearl Harbor in 1941. Mamiya would produce military gear until the surrender of 1945 and be the first to resume construction of the Mamiya Six. By the end of the decade, the company diversified into 16mm, 35mm, and Twin-Lens cameras. When Nikon introduced the F and the idea of a system camera in 1959, Mamiya took a different approach. While they did produce their own system SLR, the Prismat, they also in 1960 introduced the Mamiya Press. The Press is a system based medium format rangefinder, interchangeable lenses from 90mm to 250mm were introduced and an interchangeable back that allowed for 6×6, 6×7, and 6×9 exposures on either 120 or 220 film. The backs were based on their own M-Mount and included a bellows that allowed for limited movement. The Press G introduced in 1963 allowed people to use Graflok backs to run roll film from Century or Baby Crown/Speed Graphics. Mamiya also produced a budget model in the Press S released in 1964, the S lacked the rear bellows and had a fixed 105mm lens. The Press G was updated in 1965 to the Mamyia 23 which as the name indicated would accept film holders and shoot 2×3 sheet film. The first major update to the entire system came in 1967 with the Mamiya 23 Super, they returned to the old M-Mount for film backs, but a 23 Super G had a Graflok back. The 23 Super featured a redesigned body which allowed for the photographer to change the finder lines to make it easier to compose, the finder lines were calibrated to 100mm, 150mm, and 250mm lenses. A further update in 1969 produced the Mamiya Universal, and for the first time allowed for total customisation. The Universal, while doing away with the rear bellows, did allow for the photographer to mount their own backs either with the M-Mount or Graflok. You could also mount a Type-100 Polaroid Back. A result of this is the Polaroid 600 and Polaroid 600 SE produced by Mamiya for Polaroid. Mamiya produced two models for Polaroid, both cameras lacked the ability to swap out the back to shoot roll film, you are limited to Type-100 film. The 600 also lacked interchangeable lenses having a fixed 127mm f/4.7 lens manufactured specifically for the Type-100 film size. The 600 SE allowed for interchangeable lenses and could use three different lenses. In addition to a Mamiya-Sekor 150mm f/5.6 lens, Mamiya produced two other specific lenses for the 600 SE, the 127mm f/4.7 and a wide-angle 75mm f/5.6. The 600 SE allowed the photographer to adjust the finder lines for the 150 or 127 lenses and use an external viewer for the 75mm. When the Universal ceased production in 1970, the 600 and 600 SE also ceased production.

Impressions
If you’ve worked with any of the Mamiya Press cameras then the 600 SE will be a familiar camera, it’s big, heavy, and bulky. That said, there are certain elements of the 600 SE that does set it apart from its nearest cousin, the Universal. The weight and ergonomics are terrible, the massive body is far from what I’d like to be carrying around for any length of time. Even with my best straps, the thing wears on you even after a half-hour. And due to the strange design, it doesn’t fit easily in any camera bag. You have to disassemble it completely to store in any reasonable way. At least you can do that, dismount the lens, film back and handle. And the film back does have a darkslide. Despite the bulk, the handle is a useful accessory to have plus it adds on the cable release to the shutter and at least makes life a little easier when working with the camera hand-held. It also helps that both the handle and the camera body have accessory shoes, which for me helped mount the ReveniLabs meter on the handle. For the limited controls on the camera, they are decently laid out. But you do have to be familiar with the function of a large-format camera lens as your exposure controls are there. I also found dismounting the film back nice and easy with only a couple of locking switches, making it easy to swap out the film back. Mounting and dismounting the lens is also a simple task. Although the best part about the camera is the viewfinder, it’s big and it’s bright. There are also two different frame lines, one for the 127mm lens, the other for the 150mm. If you’re using the wide-angle 75mm you need the external viewfinder. Of course, the viewfinder isn’t perfect, the rangefinder patch, although having good contrast, is oddly small for a viewfinder that big.

Experiences
Having used similar cameras to the 600 SE in the past it gave me a leg up when working with the 600 SE as I already knew the ‘groove’ that you need to get in your head to fully operate the camera effectively. As I mentioned in the previous paragraph, the camera is heavy and awkward, if you’re going to use it for any length of time you want a heavy-duty strap. But even after a quick half-hour shoot my arm was hurting as I did not have a strap on the camera as even my PeakDesign ones didn’t even cut it for the camera. If you know how to load type-100 film, then getting the film loaded will be a simple task. I will say it’s easier to take the back off the camera when loading. Just remember to keep that darkslide in place. Once loaded, you’re good to start. Having an on-shoe meter, like the ReveniLabs, is a must to help make using the camera in the field and handheld a lot easier and the meter has the power to perfectly expose the FP-100c. You do need to get into the groove, cock, meter, set, expose, then cock again when you pull the film out for development. Remember, no violence when pulling out the tab and the film pack. The giant viewfinder makes composing a breeze combined with the bright lines. Honestly, those lines helped frame up my shots and I never once had an image that didn’t turn out exactly as I composed it. And while that rangefinder patch is comically small given the size of the viewfinder and frame, it isn’t too bad, excellent contrast, and I never misfocused once. Sadly, after five frames the whole film pack failed, the sixth frame failed to pull through as the tab broke. And while I did try to recover the pack, it all fell apart. The one good thing is that I loved each frame that I got for those first five.

Optics
Despite being a camera with interchangeable lenses, you do have to be careful on the 600 SE what lenses you mount on the camera. It uses the standard Mamiya Press mount so, in theory, you can mount any Mamiya lens in the catalogue. But given that the 600 SE isn’t designed to use traditional roll film but rather Polaroid film, both Type-100 and 4×5 sheets (like the iconic Type 55). You need to ensure that your lens projects a large enough image circle to expose the whole sheet. Out of the entire selection, only three lenses work properly with the format. Two were produced specifically and one came from the existing catalogue. The two lenses that were produced for Polaroid by Mamyia are the 127mm f/4.7 and 75mm f/5.6, and the one lens from the standard group is the 150mm f/5.6. Another thing to realise is that these lenses are designed around the concept of large format, they’re not the fastest out there, especially these three so no low light work here. On the plus side, the 127mm stops down to f/64 so if you’re a landscape junky then you’ll get some nice massive depth of field.

Lowdown
I honestly have mixed views on this camera. On the plus side, it is a little better than the Universal in the sense that the viewfinder is much better. The downside is that it is hard to get your hands on Type-100 Polaroid film. It also doesn’t help that I only managed to get five frames out of a pack of ten, and these days it is getting a far more likely chance that your film might go bust. Increased if you use old expired Polaroid stock. That said, according to the literature you can mount some Mamiya roll film backs on the camera and even shoot 4×5 film with the camera. Sadly these cameras still fetch a high price on the used market. You’re looking at 460 dollars on the low end with pricing going above 1000 dollars. And in many cases, you aren’t even getting a lens. Plus there is always the matter of access to the film which can be far pricier today than when the film was far more readily available. As much as I liked this camera far more than all the other Mamiya Press cameras, I cannot easily give you a seal of approval. But I wouldn’t turn one down if it was offered as a gift.

ShareTweet
2020-10-05
Previous Post: The Fantomé of Babylon – A First Look
Next Post: The Canal – The Stone Channel