If you’re a long time listener to the Film Photography Project, you might recognise the name of the camera I’m reviewing today, but that is not the camera I’m referencing. There’s a certain soundbite used in some earlier episodes the Agfa Clack as said by one Dan Domme. The Click-II is the younger cousin to the Clack, unlike the Clack, the Click and Click-II shoots 6×6 and is a bit of a strange duck given that the Click-II saw production starting in 1959 long after the days of the simple box camera. Yet, even today cameras like the Click-II see a level of popularity among the crowds who are big into Lomography, and I’ll admit there is a particular draw to a camera that makes you think about your photography differently. Plus these types of cameras are just fun to use! 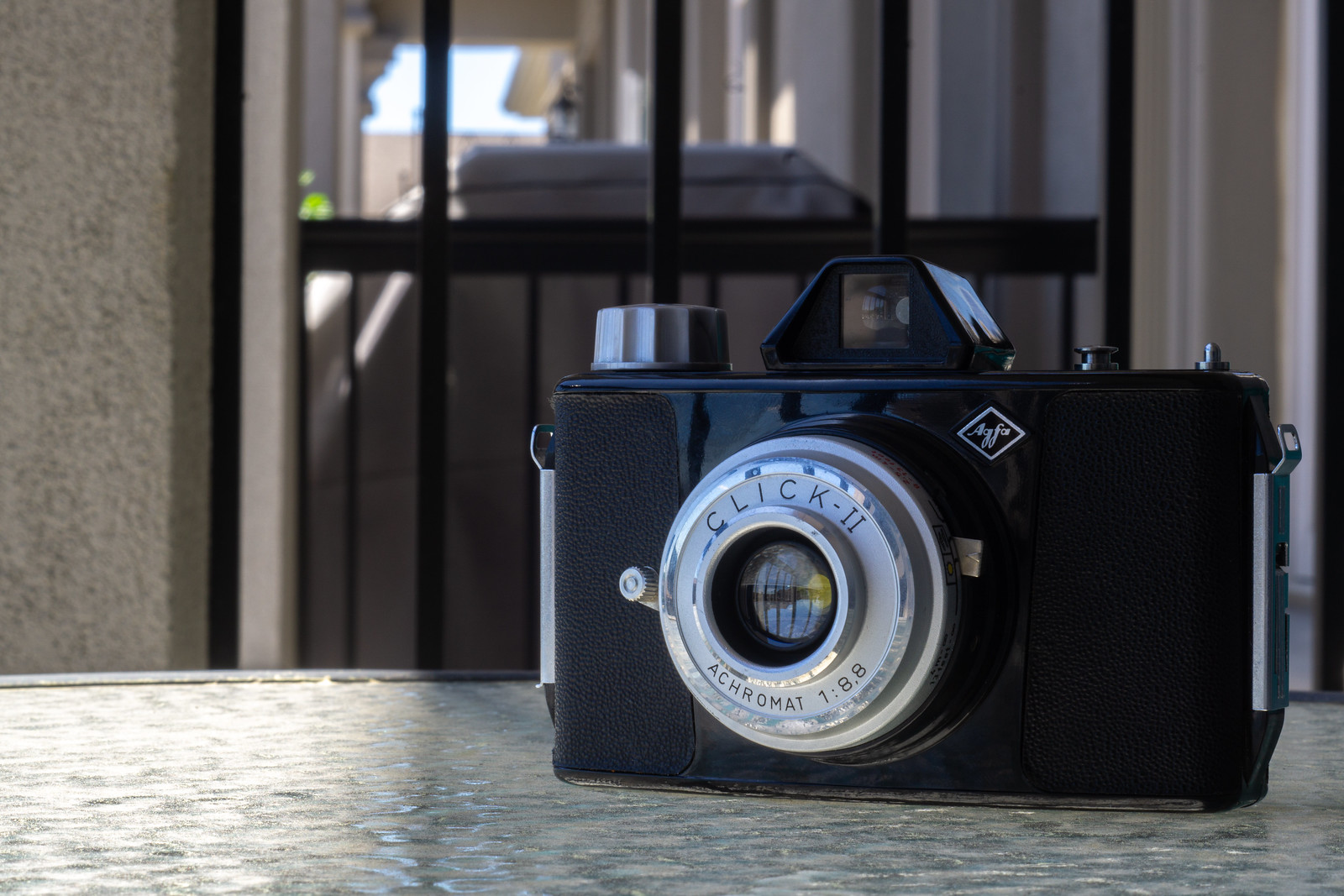 Background
Agfa had a long history in the photographic industry producing their first camera in 1926 after it became a part of IG Farben. And they introduced their first box camera that shot 6×9 negatives on 120 films in 1930. The end of the war brought the breakup of IG Farben, and Agfa managed to retain much of its pre-war holdings in both the production of cameras, film and photographic chemistry. The 1950s brought strange times for Agfa, in addition to producing high-end cameras and improvements to their pre-war models. Cameras like the Isolette and Sillette. Complete with an aperture priority semi-automatic camera in the Automatic 66. And despite these leaps forward they also produced several lower-end box cameras. The late 1950s saw a pair of simple box cameras produced, the Clack which shot 6×9 and the Click which shot 6×6. The first Click (Click-I) operated with a simple single-element lens the Click-II was an improvement with a two-element lens. However, the leaps forward in photographic technology in the 1960s production of the Click-II continued to 1970. Oddly enough there was also a Click III which was an export version produced for India along with a Click IV and Click V although little is known about these, the IV would be a copy of the II but with a standard hot shoe. In a strange aside, the back clips would go on and inspire those that are found on the Holga.

Impressions
Despite being essentially a box camera the Click II is a lovely camera. It has an interesting Art Deco (Revival?) look about the camera. The camera itself is simple with the few controls located on the lens barrel itself. Each being a distinct shape to avoid mistaking one for the other. The largest of the two is the shutter release located under your right hand when being held and the aperture control under your left and is much smaller. The only other control on the camera is the film wind knob, which is big and kernelled and located on the top plate. The viewfinder, which does little more than give the Click II a ‘camera’ silhouette, but is relatively decent at helping frame and composes the shot despite having no frame lines. But don’t let looks fool you the camera is made primarily of bakelite, an early form of plastic. You don’t want to drop the camera; there’s a strong chance that it will merely shatter from even a short fall onto a hard surface. Another problem is the lack of a standard hot shoe. Instead, the Click II has a proprietary mount for a Certo flash. But using flash with a box camera is something I’ve only done once, and I wasn’t too impressed with the results. If you must have a flash, look for a Click IV or V.

Experiences
It’s a box camera and offers a similar experience to other box cameras that I have shot. Loading the camera is an easy task, as the camera back is held on with a pair of clips similar to that found on the Holga 120N. And while the whole back is removed in the film loading process only one clip will slide down releasing the back, the second clip acts more like a pseudo hinge. The release clip will be marked with a downward pointing arrow. Watch out when loading film, I shot a couple of rolls through the camera and ended up with one being a ‘fat roll’ because I didn’t pay enough attention to ensure proper tension on the take-up reel. Once out in the field, the camera itself is relatively light. Now I used the camera without a strap, and when not in use, I tucked it back in the camera bag. A small strap or the providing ‘ready’ case would not go amiss, just make sure that the strap is in excellent condition as you don’t want the camera falling. Then it’s just a matter of taking the photos. Pick the film speed according to the conditions. I suggest something between 25-100 as the camera is fixed to a shutter speed of 1/30″, and has a selectable f/11 or f/8.8 aperture, the f/11 setting also includes a built-in yellow filter. Of the two rolls I shot, I liked the ASA-100 shots better; they were exposed just a little better than the ASA-50 ones that were a bit dark (but nothing that couldn’t be fixed in post-processing). Film advance is nothing special, the standard red window, just make sure you’re in some sort of shadow as I missed a frame when I advanced too fast and couldn’t see the numbers in the red window. And trust the viewfinder, despite no feedback, it does help with composing your shots.

Optics
Honestly, it’s the lens that is the surprising part of the camera. When it comes to box cameras, the lens can make or break my view of a camera. Thankfully, Agfa installed an Achromat lens on the Click-II, which indicates that the lens has two glass elements instead of a single (Meniscus) element. The images while not perfect, when compared to some of my other 6×6 cameras, are pleasing, sharp in the centre with a lovely fall-off in the corners. The curved film plane helps with improving the sharpness and reducing any distortion from the wider-than-normal focal length. While it’s not the fastest lens out there with the widest aperture being only f/8.8, the outdoor shooting aperture is about f/11, so you have a good depth of field. Plus having that built-in yellow filter for outdoor shooting works well! There’s also a closeup filter, but I have not used that function.

Lowdown
If you want a box camera without it being a box, then the Agfa Click I or Click II are both excellent options. But I am partial towards the Click II, the main reason being that Achromat lens. And the best part is that on the used market they run between 20-60 dollars, although they can be higher. If you are getting into box cameras it’s best to suit the film for the situation, usually running in bright daylight you’ll get away with ASA-50 or ASA-100 speed films. Indoors you’ll either want to throw on that flash or get ASA-200 or ASA-400 film depending on the lighting. But I love working with older styled emulsions to leverage that old-school look. The Agfa Click II is undoubtedly a film camera to look into for just having fun with photography and not thinking too hard.