When it comes to slide film, it is not something that I like to shoot often, mostly because when it comes to processing, it’s time-consuming and costly; even purchasing the stock is costly. Plus, scanning some slide films stocks are difficult to nail down both exposure and colour balance. And then there’s Provia 100F; Provia is a solid performer and one that gives an excellent starting point in the world of shooting slide film. It reminds me of Sensia and Astia, both excellent slide films with a bit more forgiveness than the Velvia line and natural colour reproduction. It also scans easily without too much trouble. 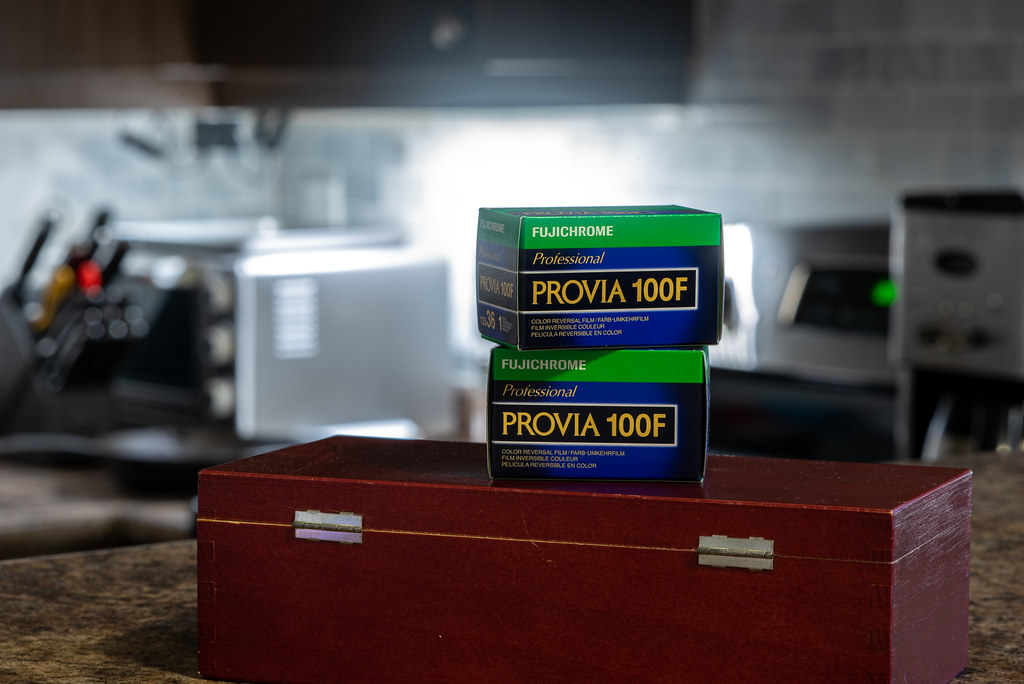 Colour Rendition
The easiest way to describe the colour rendition of Provia 100F is natural; there’s nothing over-the-top or extreme. The contrast is modest, and all the colours look as they do in real life, especially if you have good optics on your camera. This makes the film a jack of all trades; if you want to show off a traditional slide show of your vacation Provia 100F will deliver no matter the subject matter. It handles landscape, people, and architecture. Being a daylight balanced film, it works best outdoors. Colour biases tend to lean towards magenta and other warm colours, but I find that pleasing in the summer months. This warmth is even more seen when working with the film inside under artificial light; despite being daylight-balanced, I like how the film behaves under tungsten lights, amping up that warmth and presenting some interesting internal shots. I found this reaction during my first trip to Montreal and photographing inside some of the city’s historic churches such as St. Joseph Oratory and at sunset when you have direct low evening light hitting the subject.

Image Quality
The image quality of Provia 100F is excellent, and I have no real complaints. The images are sharp and fine-grained; while you pick up a bit more than Velvia, it isn’t much more, and unless you zoom right in, the average viewer won’t pick up on the grain. Plus, the grain adds to the edge sharpness, and I would rate Provia 100F as slightly sharper than Velvia 100F and on par with the sharpness of Ektachrome E100. Contrast wise, Provia 100F sits in a middle ground with a good separation of tones and colours but not enough to smack you in the face and over-the-top contrast. The film also projects well, and you have good sharp images up on the screen, and everything looks right. Unlike what I found with Velvia, Provia 100F handles harsh light far better. It can capture both highlight and shadow details wildly different without sacrificing too much on either end. In other words, Provia 100F is far more forgiving and behaves more like a consumer slide film where exposures aren’t always perfect. You cannot push that feature too far or mess up the film, but you have closer to a stop on either end than, say, a third.

Scanning
Of the three Fuji slide films I’ve reviewed this year, Provia has proven to be the easiest to scan. I did not have to do any major corrections in post-production for balancing out the levels and colours in many cases. It also helped that I was running with my Nikon Coolscan V ED, a powerful film scanner and, despite its age, handled the film and colours well. In some cases, I did have to bump up the brightness, but I’m chalking that one up to the age/condition of the scan and the need to crack the case and clean off the mirror. Another help to the digitization process is the colour rendition I spoke to in a previous paragraph, being more on the cool side with no obvious colour biases. For someone like me, who doesn’t do well with colour balance, the film is easy to correct, usually through automated options in Photoshop but required a light touch when adjusting manually.

Overall Impression
With the recent news of the end of the current version of Velvia 100, Provia 100F has ended up on top as Fuji’s (relatively) faster slide film. While I’m not a fan of slide film, it is far too finicky for my tastes and getting it processed in a lab requires a trip to a post office and waiting for the lab. I find the cost/enjoyment ratio far too in favour of cost rather than enjoyment. That said, Provia 100F is an excellent slide film and one of my favourites, the other being Kodak Ektachrome E100. Provia 100F offers a far easier gateway into the film stock with a bit more latitude than Velvia and far more natural colour representations, and far easier scanning if you start shooting slide film. And I don’t see Fujifilm cutting the stock anytime soon, but Fuji is a big black box, and you don’t know what they have planned next until it’s announced.