There is a legendary film that many professional photographers whisper about in hushed tones of reverence. Part of a lineup of professional films held near and dear to many photographers’ hearts. Especially regarding its sharpness and fine grain, that film is APX 25. I have shot this film many times; it’s one that I always will seek out when hunting through boxes of expired films or in the fridges at camera stores or when offered up by former professional photographers. Despite being a slow film, it is fun to use in almost any situation, and though it has been gone for twenty-two years now, it still holds a place of honour as a film that many other films try and replicate. AgfaPan APX 25 is the third in a line of ASA-25 films introduced by Agfa, starting with the original Isopan FF, then AgfaPan 25, and in 1989, AgfaPan APX 25 hit the markets. It has also been a while since I last shot the stock, 2016, so when I lucked into a brick of ten rolls, I decided it was now time to do a proper four roll review. 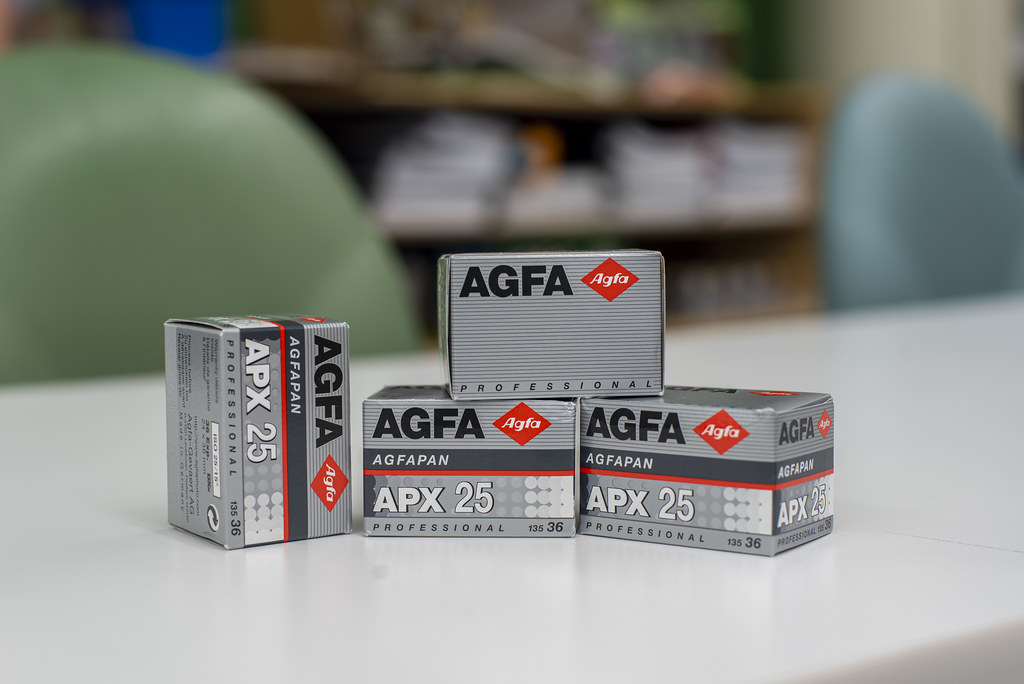 Roll 01 – Ilford ID-11
If there’s one thing you can always count on, it is ID-11 to show off what a film can do without any real interference from the developer. And Agfa APX 25 does what it says on the tin, delivering both sharp and fine-grained images. Smooth is the word I would choose to describe these results, and while I know that APX 25 and Rodinal are the iconic combination. These are perfect and show off the beauty of APX 25. ID-11 presents sharpness in two ways, the first is the beautiful edge-sharpness, and the second is the tonal separation. And the contrast in this combination is gorgeous! You not only get clean blacks and whites but a tonne of range between the two. I’m sure you can extend that range by going with a 1+1 dilution and a longer development time, but it is incredible even with a stock dilution. I honestly feel these are better-looking images than those produced by Rodinal.

Roll 02 – Ilford Ilfotec HC
These images certainly surprised me; working in high-contrast lighting, I decided from the start to run these through a dilute mixture of Ilfotec HC. Ending up with my standard mixture of 1+63, and I’m glad I did. The results here are what I would expect from APX 25, maintaining the sharpness and keeping the grain down. Taking advantage of the compensating nature of the mix, I was able to maintain some highlight detail with a slight sacrifice of the shadows. But I also kept an excellent tonal separation. Ilfotec HC (Kodak HC-110) is another superb choice for APX 25. You can also tune your dilution to the situations you’re in, with a 1+31 dilution suitable for bumping up the contrast and 1+63 when you need to take advantage of the film’s excellent latitude.

Roll 03 – Adox Rodinal
You can’t have a review of APX 25 without including Rodinal; it is an iconic combination. And despite the branding change, Adox Rodinal is based on the final formulation from Agfa in 200. These images are clean, both sharp and decently fine-grained. Yes, more noticeable grain is present in the scans, but we are working with Rodinal here. I think it helped that I ran it through a 1+50 dilution. There is a bit more contrast than I remember, but that works well, as the day I shot these, the lighting was flat. But you still get a decent range of tones across the middle areas but lose some of the shadow and highlight details. I would use this combination under low-contrast lighting as you get the contrast bump; it might not be the best choice in bright direct light.

Roll 04 – Adox FX-39 II
From the original to the new, while I did think of trying out Atomal 49 (and I may still), FX-39 II h s been a bit of a go-to to get some of the best results out of films. And it certainly delivers the good stuff. If you want the results of a general-purpose developer, but don’t want to increase the amount of visible grain, then FX-39 II is an excellent choice. The first thing that stands out is the richer tonality you’re getting from the film; these are negatives that scan with only a bit of work in post-processing to get things right. And they also will print wonderfully in the darkroom. There is also plenty of edge sharpness and little in the way of visible grain, showing off the best aspects of APX 25.

Final Thoughts
Dealing with this film at home can be difficult as professional film processing was usually handled at a lab where every condition was controlled. If you’re developing at home, be prepared to deal with a lot of cupping when the film dries unless you’re in ideal conditions. You’ll want to use a film dryer to ensure that the film dries flat. With the thick base, even in my home’s relatively moderate humidity and above room temperature conditions, I got some severe cupping on the film when it dried. Thankfully some back rolling and the Nikon Coolscan V ED helped get clean scans. For a film produced before the rise of digital in any meaningful way, it deals with scanning well and only took a bit of tweaking in Photo hop to get the results I wanted. The one downside to APX 25 is t at unlike its predecessor, AgfaPan 25, APX 25 was never available in sheet film formats. When it comes to APX 25, there aren’t many films out there today that can match it. Sure, plenty of modern films can replicate the fine-grain and sharpness, but they’re not ASA-25 films. The only spiritual successor I can find is Rollei RPX 25, and I know it is not the same f lm stock. But I plan to pit the two film stocks against each other. Despite being discontinued, a lot of the film was made and still exists today, primarily found in pro photographer’s fridges and freezers waiting to be used. And this is a film that demands to be used! And the best part is that because it is such a slow film, you can still shoot it at box speed as even the last batch used is only now getting close to two decades. The slower the film, the minor age can affect it when stored properly. Of course, like any rare and sought after film, you will pay a premium for APX 25, but sometimes the deal is right. But those deals are getting rarer, the 35mm rolls are running close to 20$ per roll, and 120 is 25$ a roll when I last checked eBay.

Further Reading
Don’t just take my word on APX 25; you can check out the reviews by other excellent camera reviewers!
Lomography – Review: Agfa APX 25 ASA