We’re going back to the Mystery Camera Challenge, only this time Alex is picking out cameras for the team from his collection and choosing cameras that will certainly challenge the folks who are used to certain types and styles of cameras. At the same time, Alex takes on a camera from John’s collection. The team also discusses tips and techniques for photographing the fall colours that will be coming sooner rather than later.

Mystery Camera Challenge V
This time around, Alex digs into his own camera collection, looking for cameras for our gang of misfits that aren’t exactly their bread and butter cameras. And comes up with some interesting choices that pushed the team to new highs or lows. 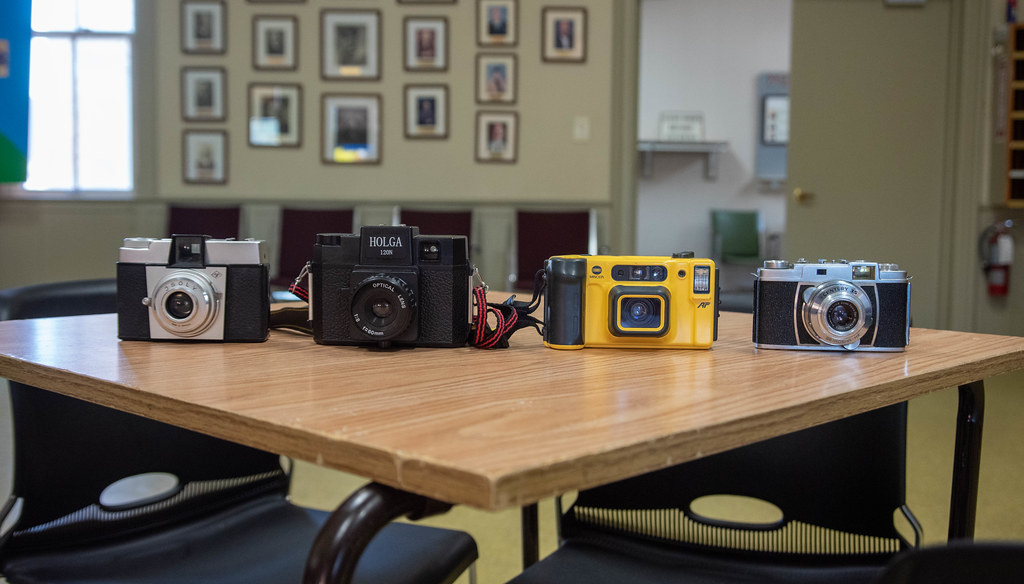 Agfa Isoly Jr.
The Isoly Jr is a simple camera designed for children from the Isoly line. A simple single-element lens and a strange sort-of 4×4 image size allow for sixteen shots per roll of 120. The oddity made Alex select it for John, and John was surprised at the image quality.

Minolta Weathermatic 35DL
The Weathermatic 35DL is a weatherproof/underwater 35mm point-and-shoot camera that Alex selected for Bill. It’s chunky, all yellow and all automatic, which made it the perfect camera for Bill, who is used to all sorts of manual control.

Holga 120N
When it comes to James, he loves high-end gear with precision control and optics, which made Alex pick the Holga 120N; with little control and everything guessing, it’s certainly the opposite of what James is used to!

Falling For Fall
While it’s only the first week of September, now is the time to prepare for those fall colours in the next couple of months. You’re going to start to see the sun going down earlier, making it easier for those beautiful golden hours which light up the colours of the leaves. As for the film, you will want to choose ones with a warm colour palette; for the slide film, that is Fujifilm Provia 100F; if you want something in C-41, Kodak Gold 200 or Ultramax 400 are excellent choices. Kodak Ektachrome E100 is a good choice if you want to cool things down. If you are a sucker for intense saturation, try Fujifilm Velvia 50 and Kodak Ektar 100. Or even give the new CineStill 400D a try; that will make the reds pop and glow! When you’re out, try to meter and shoot for highlights, this will help get those colours to pop and try and aim for good side light; early evening and mid-mornings are your friends at this time of year. Don’t procrastinate; get out if you see that things are exactly how you want them; a delay could mean the difference between colour and nothing. And, of course, keep an eye out for those colour forecasts; they will help you plan your timeline.