In full disclosure, I have technically already reviewed Adox Scala 50, but in its HR-50 branding. But as I’m developing the film in a completely different way, I figured it would be worth reviewing in its Scala livery and developing HR-50 as a Black & White slide film. These days a dedicated b&w slide film is a rare stock; there’s only one out there, Fomapan 100R, but in the past, one of the most iconic was Agfa Scala 200X. But I was using negative films as the positive stock was common, with Kodak also producing their reversal kit for TMax film. Adox also released their Silvermax film as Scala 160, but when that stock ended production Scala 160 bit the dust. But with the release of the Adox Scala Developer kit and the release of Dr.5’s process, home reversal development is within reach of many photographers. 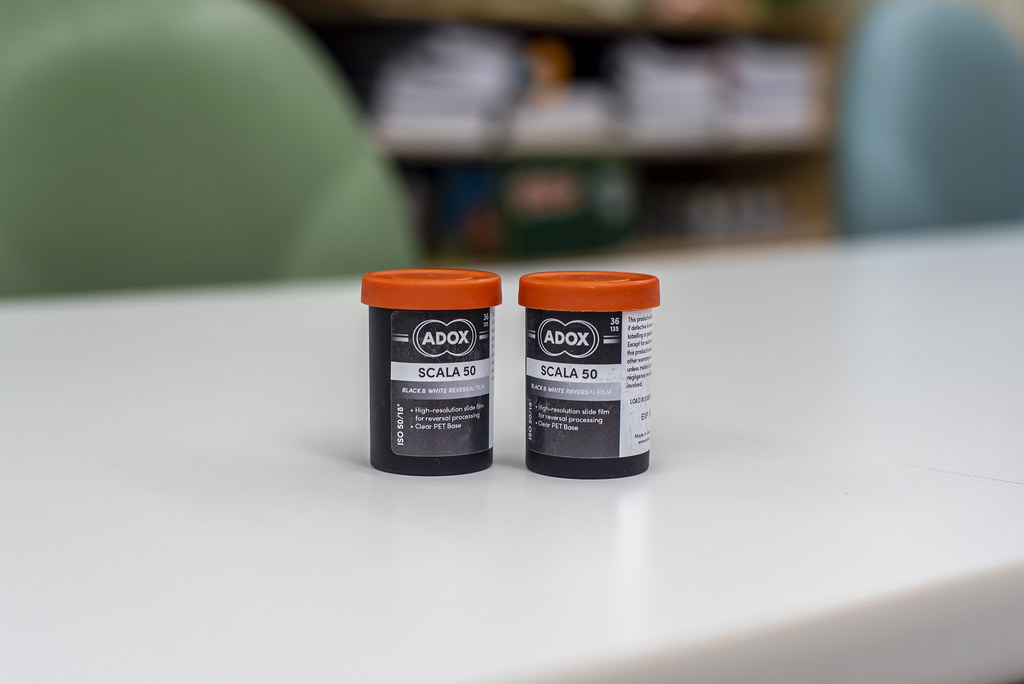 Development
While you can develop Scala 50 as a negative film using Adox HR-50 times, you have to develop the film in the Adox Scala development kit to get those sweet B&W reversals. It can be daunting when you first look at all the steps. And honestly, it was the terrifying thing I have done in my home development journey since I did colour processing at home. And while I’ll be releasing a full review of the Scala developer at the end of the month, I’ll give a brief synopsis of the development process here. The Scala kit contains everything you need; all you need is to add water. The developer and bleach come in liquid concentrate, which you mix 1+1 with water; the clearing agent is in powder form, mixed with water to make 2L of working solution. Then you step through the first development (14 minutes, less if you’re using a rotary processor); after that, save the developer (you’ll need it later), then rinse and bleach for four minutes. Adox recommends continuous agitation (if you’re using a rotating base, drop this time by 15%, or you’ll over bleach the film). Another rinse, then the clearing agent for another four minutes, followed by another. These initial rinses are for 2.5 or 3 minutes. Now it’s time to do something that, as a long-time home processor, is tantamount to ruining your film; take the roll from the tank and expose it to artificial light for four minutes, two minutes per side. Use either an incandescent (100W to 150W power, I used a 60W bulb) or fluorescence light source, never natural direct sunlight. And don’t expose the actual emulsion sides, but aim the light from the top and bottom of the reels slightly tilting to expose the film to the light. Once done, run it through another six minutes in the same developer you used initially. A final wash of six minutes, and you have slides. Yes, it is daunting, but with a bit of practice and confidence, it becomes easier each roll you run through the technique.

Image Quality
If you’ve worked with HR-50 in the past, then you’ll know that this is an exceptional film. Boasting fine grain and sharpness, especially when processed using the standard HR-DEV chemistry, it looks better (in my eye) in FX-39II. But these developers are a little more complex than Scala, which uses only a single developing agent, hydroquinone. So you’ll already be going into using Scala 50 with high expectations. And as a reversal film, Scala 50 doesn’t disappoint, but how it’s processed can either make or break this film. But I can honestly say I am blown away by the quality that came out of this film; it reminds me a lot of what I saw with FX-39II. There is a bit of detail loss in the highlights, but good shadow detail and excellent mid-tones. There’s hardly any visible grain in the scans, and the images are incredibly sharp. I like these images the best of all my work with HR-50. I did note that these images suffer a bit from damage to the emulsion, probably from being in the bleach too long and being a little too rough with the negatives afterwards.

Scanning
Given how sensitive the negatives are due to how they were developed, I decided to skip using the Nikon Coolscan V ED; also, due to some mess-ups during the development process, I can safely assume that the scanner would struggle to lock onto the negatives. Plus, it usually has trouble with PET-based films anyways. I was a bit warry because I used too long a bleach stage on the first one, and I also aligned the film wrong during the second exposure. I could take in a fair amount of detail, so I did get a good number of usable frames on both rolls, more on the second than the first. My Epson V700 and Silverfast 9 handled the film like a champ. I had to do some work to bring back some of the details from the shadows, but only a bit of tweaking got the images to a point where I was happy with them.

Overall Impression
In my introduction, I indicated that Scala 50 is HR-50, a film stock that I like, so it should go without question that I would like Scala 50. However, I find the reversal processing a time-consuming and costly endeavour. With a bit more work, a better primary developer, and some practice, I could see myself liking Scala 50 as a reversal stock. While further experimentation with reversal processing isn’t going to happen this year, I might dig into the Dr.5 process next year and see about revisiting this film stock with a different approach. Thankfully if you happened to get some Scala 50 but not enough to warrant getting a whole kit or are intimidated by the process, like I was for several months, you could always process it as a negative film using HR-DEV or FX-39 II. If you’re looking to try something different in your development, or push yourself out of your comfort zone, then maybe black & white reversal is something that could tickle your fancy. And if you can’t find any Scala 50, pickup HR-50 instead or Silvermax (if you can find it). You can pick up Scala 50 through most online retailers, and the Scala kit is safe to ship and can be ordered from Fotoimpex, Argentix.ca, Freestyle and Studio Argentique. My review of the Scala Reversal kit will drop at the end of this month.