I have known about Adox HR-50 for some time but have purposefully avoided including it in past years. Originally released in 2018, HR-50 was one of the new film emulsions to come out of Adox shortly after releasing CHS 100 II (reviewed last month). The reason being that HR-50 is a semi-closed imaging system and I never had good luck with those, as seen by my Adox CMS20 II review. I caught a lot of flack for that one. There is also the trouble with getting the stuff here in Canada. But when I saw that both the film and the dedicated developer, Adox HR-DEV were available through my favourite online film source, Argentix.ca I jumped on the stock. According to the official documents, HR-50 is based on a technical film, designed for high-resolution, sharpness, and fine grain. But it also includes a speed-boost technology to help get it up to that ASA-50 rating. Thankfully, since 2018, I have also discovered a few more developers to round out a successful review of HR-50 in 2021. You’ll notice that HR-50 is my second review this year that has two developers clearly missing, Kodak D-76 and Rodinal. In fact, on the official documents, it doesn’t even recommend using these two standard developers. Instead, the main developer to achieve that baseline is HR-DEV, with DD-X standing in as the speciality developer and Adox FX-39 II standing in for Rodinal. The only standard developer is Kodak HC-110, and even then, we’re working with an unofficial dilution. 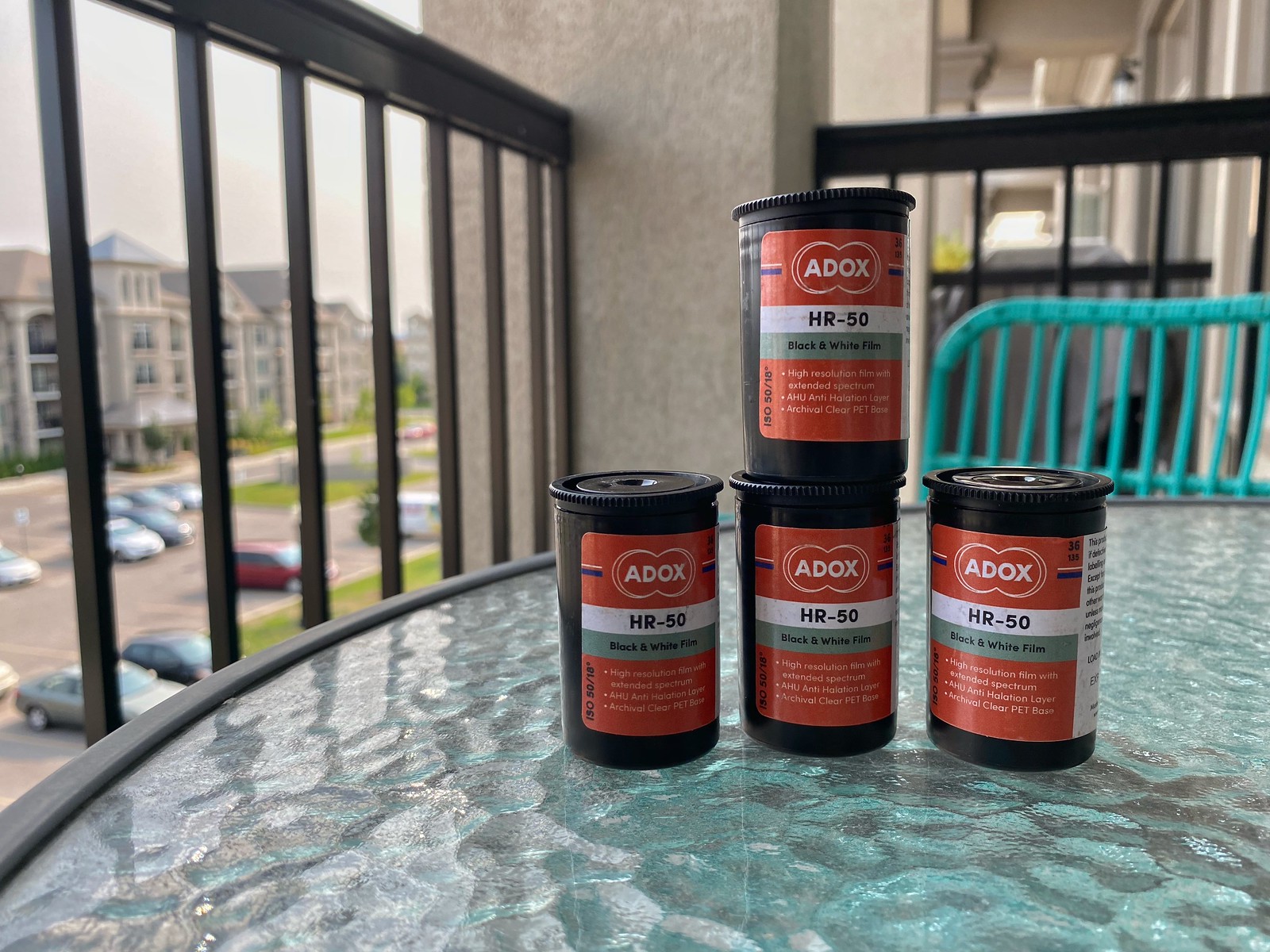 Roll 01 – Adox HR-DEV
While initially warry after pulling the negatives out of the tank, that feeling soon vanished after looking at them closely on a light table and a loupe. They looked a little bit thin, but even still, they scanned in amazing! Yes, I had to do a bit of work in post-processing, but I know of only a few films that look good straight out of the scanner. But if you’re looking for a good baseline on HR-50, use HR-DEV. I already knew that the film would have excellent acutance and fine-grain, and HR-DEV will give you exactly that; in fact, you’d have a hard time finding any grain on these negatives while maintaining excellent edge sharpness. Contrast wise; I would rate this about a middle-ground, probably thanks to the addition of a yellow filter. Of course, when working with HR-DEV, you will be using a different agitation pattern with an initial thirty seconds on constant agitation, with 2 inversions every minute. Honestly, if I can get this out of the film, I cannot wait to see what other developers can do because I don’t feel this film is a one-trick pony.

Roll 02 – Ilford Ilfotec HC
Initially, I was not too keen to develop HR-50 in a standard developer, given that it is a speciality film. But after seeing the excellent results from fellow blogger Jim Grey I was a little more comfortable. I ended up going with my standard dilution (1+63). After processing, the negatives did appear fairly thin, but then I looked back at my other negatives and saw that they all appeared a little thin. Thankfully they scanned easily, and I was able to pull a lot of detail out in post-processing. I like these results; there is excellent tonal separation and acutance, which combined creates excellent overall sharpness. While a bit more noticeable (probably due to the post-processing), the grain is pleasing and doesn’t detract from the images overall. At the same time, not my favourite, Ilfotec HC and, by extension, HC-110 and all the similar clones is a solid choice for HR-50.

Roll 03 – Ilford Ilfotec DD-X
I’m going to admit that I did not shoot these in the best light and should have gone with my 14-24mm lens instead of the 35mm, but you know you can show off the power of a film by shooting it in less than that ideal conditions. And HR-50 did not fail me; despite being low light and not getting any aperture over f/5.6 and shutter speeds over 1/30th of a second, you’ll see that these are a little soft on the edge, that’s mainly from the shallow depth of field and a touch of camera shake. Ilford DD-X is a developer I had only used once before but decided to get another bottle specifically to review the developer and give myself another developer for HR-50. In DD-X, you get the same middle contrast but a soft tonality; you get the same blacks and whites, but the greys in between are magic. You get the same fine grain and a decent amount of sharpness, I’m sure it would be better under brighter conditions, but honestly, I like the middle sharpness given the conditions. And given that DD-X is a lot easier to get here in North America, it’s an excellent choice next to HC-110.

Roll 04 – Adox FX-39 II
Despite not being the matched-pair developer, I like these results better than the ones I got with HR-DEV. In fact, I’d almost rate FX-39 as the better developer for HR-50. First off, the tones are dead perfect, with excellent separation. The contrast is far lower than I would expect, but without losing any whites or blacks. This separation added with edge sharpness makes for amazingly sharp images without any increase in the apparent grain. I would love to make prints from these, but they would be a pain to focus on in the darkroom! Yes, this is my favourite combination for HR-50.

Final Thoughts
I am not a speciality film guy, but HR-50 has certainly caught my eye. As a negative film, it is amazing, and oddly enough, it wasn’t the HRDEV that sold me on the film. It was FX-39II; it is by far my favourite. As a slow film, it is perfect for bright sunny conditions and loves a pale yellow filter. Sharp and fine-grained across all developers, and feel free to use it with any normal developer. It handles low dilution HC-110/Ilfotec HC and DD-X rather well and will probably work excellent with a low dilution Rodinal mix. While it can be tricky to find, it is available through the Fotoimpex site and Argentix.ca. I have not seen it on shelves of brick & mortar stores. And expect to see this film again in a different form next year!