I always enjoy working with a film that isn’t used in everyday photography. And one type of film that I have only limited experience with is surveillance film. Sure I’ve shot with Derev Pan and Streetcandy. But never a Kodak surveillance film. Kodak Plus-X Aerecon II, despite having the name Plus-X, is not related to the normal Plus-X; the data sheet describes the film as a panchromatic, black-and-white negative aerial film having extended red sensitivity and medium speed. This film has a fine grain and relatively high contrast and is intended for medium- to high-altitude reconnaissance. Its ESTAR Thin Base provides flexibility, moisture resistance, high tear resistance, and excellent dimensional stability. This film has a dyed-gel backing for antihalation protection and curls control and a thin, highly hardened emulsion to permit more rapid processing at elevated temperatures. This isn’t ordinary surveillance film, this is top-level stuff, used in such projects as the US Military KH-8 Gambit 3 satellite. Operating from 1966 to 1984, cameras in the satellite would eject exposed film canisters which fell back to earth on parachutes. This is the faster version of the Panatomic-X Aerecon II film and one that is certainly worthwhile to try if you can get your hands on the stock. 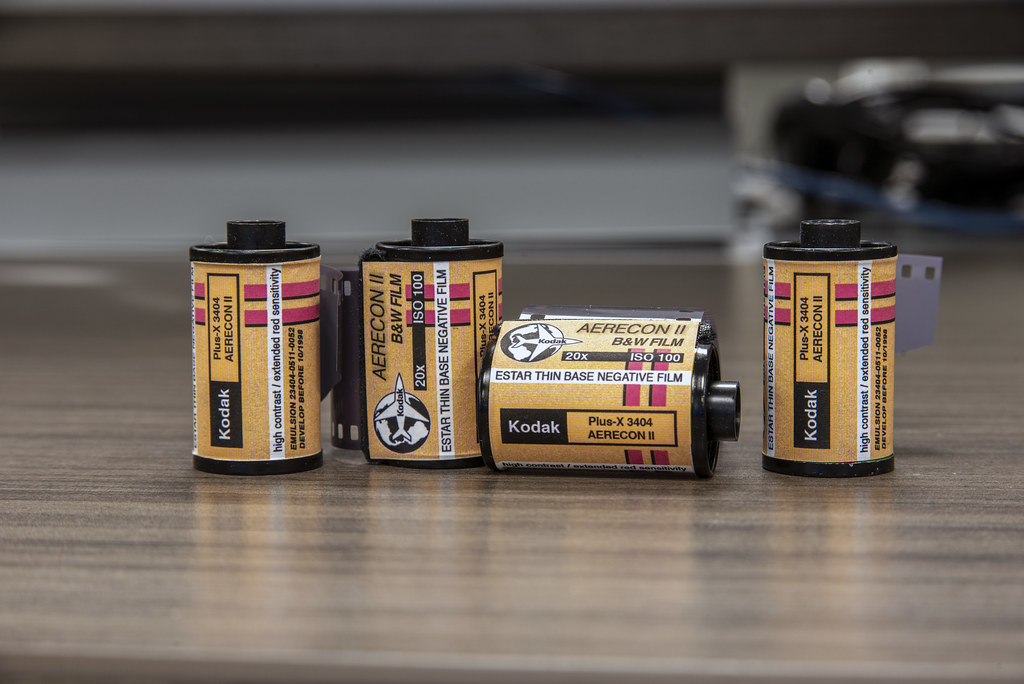 Roll 01 – Ilford ID-11
While there is some fog here, I’m not surprised; the negatives looked good out of the tank. You can see, even without a filter, that the extended red sensitivity is seen. And I’m pretty happy with the results, a strong start right from the start. You have high contrast, but not too bad; there are some mid-tones. But what makes this film stand out is how sharp the images are; they have some visible grain, but nothing wrong or bad. I am surprised at how well the film handled a general-purpose developer as most speciality films are linked to unique developers. Aerecon II is a film, but it takes a traditional developer like a champ.

Roll 02 – Ilford Ilfotec HC
After seeing the results from the film unfiltered, I decided to roll number two to try it out behind a simple pale yellow filter and gave it one stop of over-exposure, shooting the film at ASA-50 and then pulling in development. I also ran with my standard 1+63 dilution to see if I could knock down some of the contrast. After the long development cycle, the negatives looked good when I pulled them from the tank. There’s still reasonably heavy contrast, probably having that yellow filter didn’t do the film a favour, but I’m pleased with the results. Interestingly, there is a bit more visible grain, but it adds to that beautiful edge sharpness. While the mid-tones have been compressed, especially in lighting conditions ranging from the highlights to shadows, the tonal separation is superb in full bright sunlight.

Roll 03 – Adox Rodinal
Not my favourite role from this review; it’s gritty it’s grainy, but it has a lot of drama. I’m a little torn over what to think about these images. Let’s talk grain; there is a lot of visible grain on these images and plenty of edge sharpness. And the contrast is high with some loss in the mid-tones, but still good separation. I think having dramatic clouds certainly added to the drama in these images. I feel that these are also a little dark. The film could have gone a bit longer in the development or a bit of over-exposure, not much, maybe say shoot the film at ASA-80 instead of ASA-100. If I had to use this combination again, I would over-expose before pushing in development. If you did expose the film at box speed, maybe using the stand-development technique is an intelligent way to go.

Roll 04 – Adox XT-3
I have my good friend Leslie Lazenby for the times for the final roll after finding her test rolls on Flickr. And while I no longer run with Kodak Xtol, I did have some Adox XT-3 lying around. The first thing I noticed is that the negatives looked thin with plenty of base fog. The scan turned out dark, but with some work in Photoshop, I could pull out good images. I think it would be better to rate the film at ASA-80 when using this combination. These images are perhaps my favourite; the tonal separation and smooth greys are amazing. The highlights are bright, and the shadows are deep and rich. There’s also no visible grain, and edge sharpness is superb. I could read the small text on the buildings using a light table and a loupe to get the images aligned properly in the scanner carrier.

Final Thoughts
My biggest concern with Aerecon II is the thin base; as someone who develops using plastic Paterson reels, I thought it would be a struggle to load the film. Thankfully, ESTAR bases, despite being thin, are easily handled in the change bag and dry nice and flat. The one thing you need to watch out for is light piping because of the thin base. Thankfully, most modern auto-load cameras can move past the danger zone to get a complete set of images but don’t try to be economical and keep the film in the dark conditions and load in subdued light. However, when I tried to use my Nikon Coolscan V ED, the auto feeder would not latch onto the film. Thankfully my Epson V700 and Silverfast handled the scanning like a pro. While I picked up the film for this review through the Labeauatorie website, bulk rolls of this film are available through multiple other sources.

Further Reading
Don’t just take my word on Aerecon II; you can check out the reviews by other excellent camera reviewers!
No Other Reviews Found!