If you’ve been in film photography for a while, you’ve seen big companies come and go. And a pile of companies were rarely seen here in North America. The iron curtain, for many years, divided the world in two, between the west and the east following the Second World War. The Cold War kept western films out of the east and eastern films out of the west. One such brand is Forte. I’ve only seen one roll of Fortepan before; I remember using it, but it’s not on my film log, so maybe I ended up giving it away. Kodak opened a photochemical plant in Vác, Hungary, in 1922, producing the usual range of Kodak films and chemistry. After World War Two, Kodak began to pull out of eastern bloc nations, especially those that fell under the Soviet Sphere of influence. Kodak sold their Hungarian plant to a bank, which proceeded to reopen the plant as Forte Photochemical Industry VAC in 1947 and under the Hungarian People’s Republic, the company was nationalised. Forte continued to produce film products even after the fall of the People’s Republic in 1989. After the end of the Cold War, their products began to make it out to wider markets thanks to companies like Fotoimpex in Germany and Freestyle Photographic in the USA. But this wasn’t enough, and like many of the smaller Eastern Bloc film companies couldn’t compete with their western competitors, the company filed for bankruptcy in 2004. Freestyle, Bergger and Moersch attempted to keep the company running by getting Forte to produce films for their in-house brands, but that wasn’t enough, and the company shut its doors in 2007. Forte’s legacy continues with Adox purchasing equipment and IP, specifically the Polywarmtone paper and emulsion. These rolls expired in 2009 but came from a trusted source so I won’t be doing any over-exposure for this review. 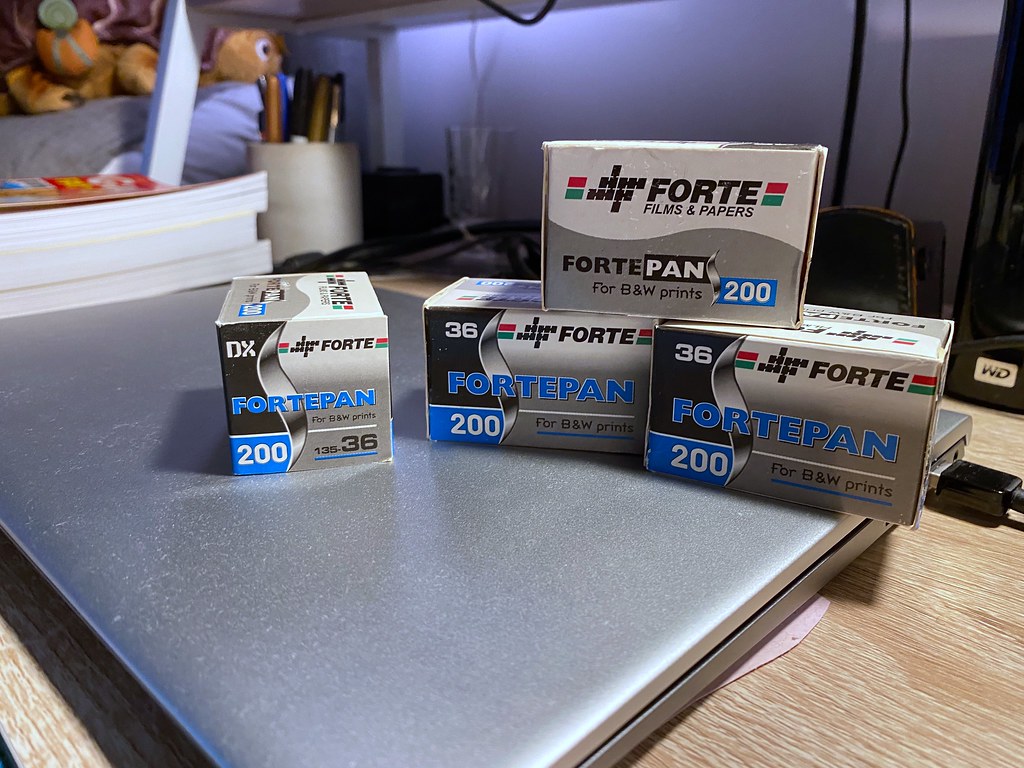 Roll 01 – Ilford ID-11
Right out of the tank, the negatives looked good, a bit denser than I expected, but there were images. I did note how much the negatives were cupping, so I had to leave the negatives backrolled for a good twenty-four hours before putting them in the scanner. In some cases, the images were pretty dark, I initially thought they were underdeveloped, but my times were spot on from what I found on the Massive Dev Chart and matched the time in the box. But once I started seeing images that were in more even light, I could see much better exposure. The first thing that grabbed my attention was the amount of grain; not too much and certainly added to the sharpness of the film. And that sharpness surprised me; I was expecting something a bit mushy. There’s also excellent contrast and tonal separation. I wish they had a 1+1 time available for the film, as I think it could improve the tonal range and separation and cut down on the grain a bit more. These results are a solid start for the film coming strong out of the box.

Roll 02 – Ilford Ilfotec HC
After the last roll, I decided to run things a little more dilute, going with a 1+63 mix of Ilfotec HC and using my B’s Processor in a slow constant rotation. When I pulled the negatives from the tank, they were thin. I could see details, but in areas where the range between my shadows and highlights, the negatives were thin, almost to the point where I was sure the images were lost entirely. Thankfully, I saw several frames with enough detail, so I started feeling better. I honestly think that even if I had left these in the chemistry for a bit longer, that would have only helped a little. Once I got the negatives into the scanner, and with some work in Photoshop, I started to pull out images. Running the film through the dilute developer was the right way; the contrast is smoothed out but still high with good tonal separation. While slightly reduced, there is still a lot of visible grain; there’s no escaping that fact. But these images are still sharp, and the grain helps. Is it a perfect combo? Probably not, but I think a stronger mix would result in higher contrast and more visible grain; while 1+63 does work, maybe something like 1+79 (Dil. F) or 1+119 (Dil. G) could result in middling the contrast and reducing the amount of visible grain without too much loss of sharpness.

Roll 03 – Adox Rodinal
I always hesitate processing films that have, for the past two rolls, been fairly heavy on the visible grain in Rodinal. But I have often been surprised, such as when I under-exposed and pushed Bergger Pancro 400. And now I can add Fortepan 200 to the films that surprised me in Rodinal. You see a higher contrast than the previous roll, but it certainly would have been worse if I had gone with a stronger dilution, 1+25 instead of 1+50. I again used a constant slow rotation during development. But there is a good tonal separation in these images and excellent sharpness. There is grain and plenty of it, but it does add to the image rather than detract from the overall image. While this certainly wouldn’t have been my first choice for Fortepan 200, it might do well for a 1+100 or 1+200 stand development.

Roll 04 – Bellini EcoFilm
After all this grain, I figured for the fourth and final roll, go with a developer known to tame grain. If you haven’t heard of Bellini EcoFilm (stay tuned to the blog in December for a full review), it is a liquid concentrate version of Kodak Xtol from Bellini Foto in Italy. And I did have high hopes for this combination, but it did not deliver what I expected. The grain was still rather noticeable and a bit rough in some frames. And while it did maintain the edge sharpness, I lost a lot of contrast, which impacted tonal separation. In some cases, it was a grainy mush, but nothing too serious. Not my favourite, but it certainly worked better than ID-11.

Final Thoughts
What made this interesting is that the canisters were labelled we the “new” notation, so these must have been part of the final run of film from the Forte factory before it shut down, which also aligns with the 2009 expiry date. There must have been an older version of the film at some point, probably before the fall of the iron curtain. And given the age of the film and where it was produced, the film is in excellent shape, with almost no base fog (but for a 2009 expired film, if there was base fog, the storage would have been horrible). The one thing I did not know is how this film cupped, it made it almost impossible to scan with my Epson V700, but the Nikon Coolscan V ED took the film like a pro. While I did enjoy working with the 200-speed flavour, I will keep an eye out for the 100 and 400 flavours for future Classic Film Reviews! So if you have a lead on some or have rolls sitting in your freezer that you’re willing to part with, shoot me a line, and we can work out a deal.

Further Reading
Don’t just take my word on Fortepan 200; you can check out the reviews by other awesome camera reviewers!
Toivonen Photography – Fortepan 100 and 200