I know, I know. I said I was happy with the Maxxum 50/1.7. But I’ve had a few people comment on that post on how the 50mm f/1.4 is a much sharper lens. The trouble is that a fast prime is often more expensive, but I got a good deal on this one, so who was I to say no? And you know, this lens lives up to everything that folks say about the glass. It’s a clean and professional with nothing overly special about it and delivers quality no matter what situation or aperture you throw its way, plus it behaves much better than I was expecting. 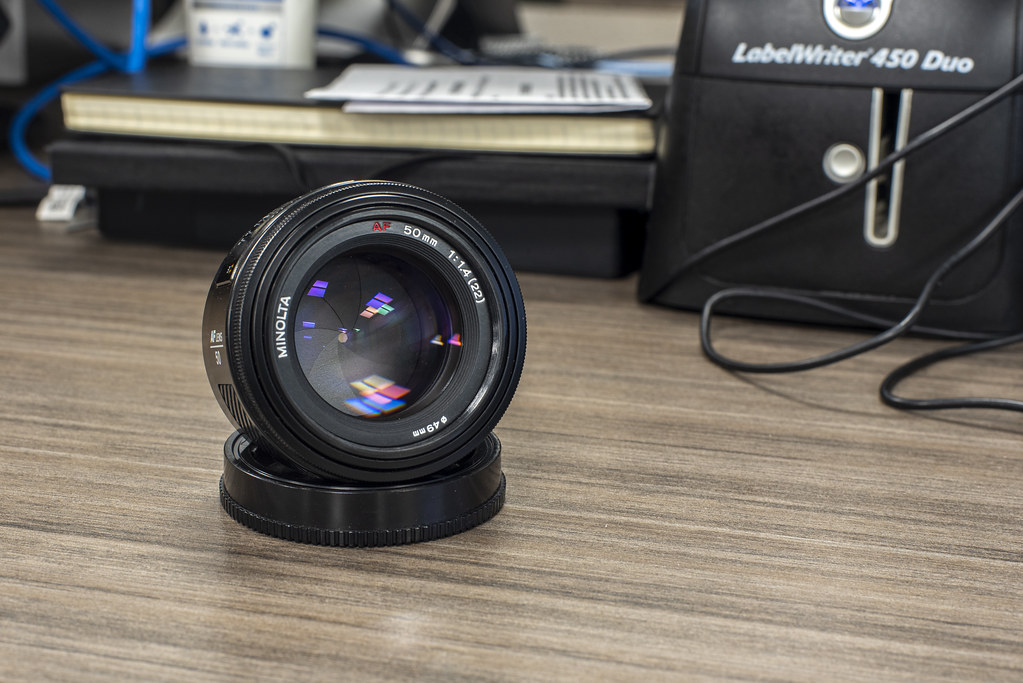 Build Quality
If you are familiar with the Maxxum line of lenses, especially the early ones, the 50mm f/1.4 will be a familiar lens. It has the same plastic housing, with metal construction on the internals and the mount itself. Making for a robust lens can undoubtedly take any situation you throw. I do find that the plastic seems to be of a higher quality than my 50mm f/1.7, a matte finish as opposed to a glossy one on the other lenses I have. You have the same plastic telescoping lens hood and a 49mm filter ring. The focus ring is the same plastic material, but small, so manual focusing is tricky. The focus scale is marked with Imperial and Metric measurements in different colours. The autofocus is snappy on both my Maxxum 9 and Maxxum 70, and the lens works well on both cameras. Probably the one thing that sets the Maxxum 50/1.4 above the Nikon 50/1.4D is that it can stop down to F/22, where the Nikon stops at f/16. It’s an extra stop that doesn’t mean much in the end, but it does matter if you’re working in a situation where you need as much depth as possible. The main complaint about this lens is the coating; while it does have multicoating, it is often said to be barely multicoated. I don’t see this as a problem as I mainly shoot black & white film, but it renders colour well to my eye. I don’t know how well it handles this on a digital sensor. One thing to note is that there have been three versions of this lens, the original (this copy) produced from 1985-1990, denoted by the yellow characters for the Feet marking and the AF in red. The 1990-2006 version has a rubber focusing ring; both distance characters are in white, as is the AF on the front of the lens. Sony still produces this lens from 2006 onwards in almost the same form, but lacking the integral hood.

Image Quality
Ever since I first used this lens, I knew the image quality was exactly what other photographers had told me about the lens. A single word to describe the quality of the lens is clean. There’s nothing overly special about the optical quality; it works and is sharp. The one thing that did surprise me was the lack of significant distortion when focused in close; even in the depth of field tests, the straight lines remained straight right off the scans. Another surprise is the lack of vignetting at f/1.4; if there is any, it is hidden within the background shadows; there is a bit of falloff but nothing too serious. The images are a bit soft at f/1.4, but that could also be due to the narrow depth of field, as sharpness improves once you start stopping down. It seems that the sweet spot for the lens runs from about f/5.6 to f/22. But even from f/2.8 up to f/5.6, what is in focus is sharp. But don’t let the softness bother you, as you get a lovely out-of-focus rendering with bright rounded highlights, there’s no swirl, but I much prefer a much smoother effect on this lens. You can see the full impact when you’re working with f/1.4 up to about f/5.6, and then the lines start to clean up nicely, but it is still evident with the out-of-focus areas up to f/22.

Applications
I strongly support that anyone with an interchangeable lens camera needs a 50mm lens in their kit. And while the 50mm f/1.4 is not something you need, it certainly can give you an edge. As a lens, the Maxxum 50/1.4 is a good choice for any Maxxum (Alpha/Dynax) camera as it is fully compatible from the oldest to the newest. And beyond that, you can mount these on Sony DSLRs and even with an adapter to the mirrorless options with full autofocus support. As a lens, the 50/1.4 makes for a great short portrait lens for individuals in the 3/4 length composition, couples or even groups when you have enough distance. Being able to close focus, you can make it a poor man’s macro lens, but it doesn’t give faithful 1:1 representation, but it does an excellent job in a pinch. You can also leverage this close focus for product work. The lens does shine in low-light conditions; opening up to f/1.4 is handy, especially if you want to isolate your subjects. You also make it ideal for street photography work, photojournalism, and events. While not its usual fare, the lens can also work for landscapes and architectural work if you have enough distance and want to give a more ‘normal’ angle of view of the subject matter.

The Low Down
This is not a lens that you need, but it certainly is one that I’m glad to have in my kit. Having the choice to use my 50/1.7 as a knockabout lens when I don’t need that wide-open is good, but having the option to throw on a faster lens is much appreciated. The problem is that there are three different versions, so it is essential to pick the one that suits you the best. Most people will recommend the first generation with the red AF marking; these will run between 150-200$ or more if you find one in the original box. The 2nd and 3rd generation lenses carry about the same price tag. I found it hard to find the lens on its own; many are sold as part of a kit with a Maxxum body, so that again brings the price up. If you need something fast, or want something that is a little more ‘pro’ for your Maxxum 9, 9000, 9xi, then the 50/1.4 is for you! But if you are a bit more budget minded, the 50/1.7 is still an excellent choice.