When it comes to SLRs, I spent a lot of time looking for inexpensive cameras in systems that I had never touched before. I had a vague idea of Konica cameras and their SLRs. On a trip to Burlington Camera, I happened across the Autoreflex T4, and Joan told me how these were underrated but that the optics were where the camera shone. Other than that, the camera isn’t much of anything. Basic, simple, and took amazingly sharp images. 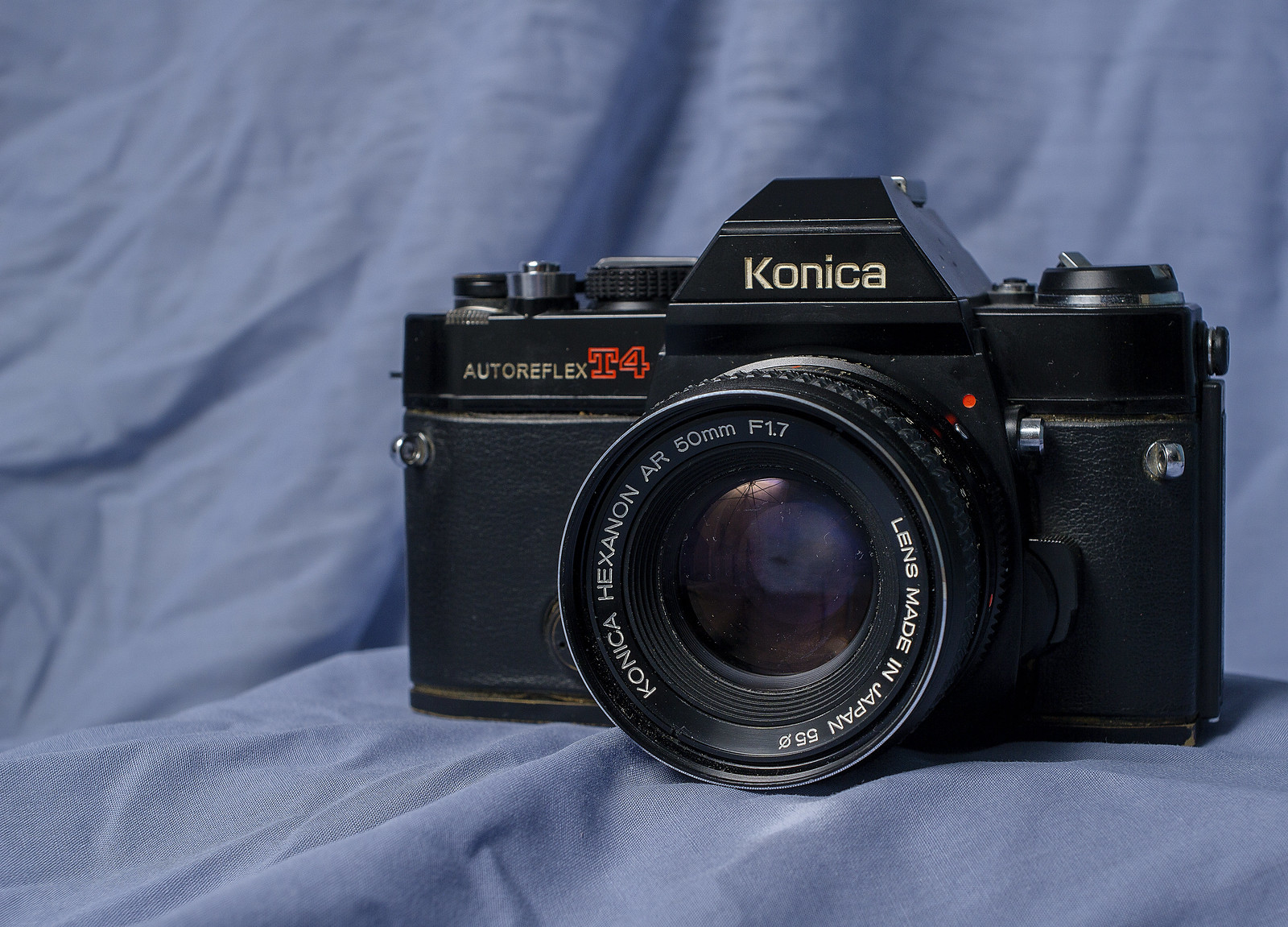 Background
In 1965, Konica released a first in the camera world; the Auto-Reflex came with great fanfare at that year’s International Photography Fair in New York. Not only did Konica release their new lens mount, the Konica Bayonet Mount II (AR-Mount) an improvement on their original mount. But the Auto-Reflex also included for the first time a shutter-priority semi-automatic exposure system. The metering system was not TTL; rather, the meter was mounted on the side of the camera body. A stripped-down meterless version the Auto-Reflex P came a year later but lacked everything that made the Auto-Reflex an Auto-Reflex. The Autoreflex T came in 1968, as the T indicated the camera now had TTL metering. It also retained the full mechanical function and shutter priority. An improved version, known internally as the T2 but that was never indicated on the camera body itself. The T2 was not a whole new version of the camera but rather made minor changes. Most of the changes were cosmetic with a different on/off switch and changes in the layout. But it also had several internal changes and a different assembly and manufacture. In 1973, the Autoreflex T3 marked the first significant change. Overall the T3 was smaller than the first two models. It also featured a brighter viewfinder that showed both the shutter speed and apertures. The T3 remained a shutter priority mechanical SLR and now had an improved meter and depth of field preview. An improved version saw the hot shoe fixed permanently to the prism. The T3 became a fast favourite with many describing its use as buttery. When Konica released the T4 in 1979, it was a strange continuation of the mechanical nature of the camera, but it did strip down the use of metal. While the internal frame remained metal, the outer shell was now a composite material. And it had a soft leatherette that matched the buttery smooth operation. However, the material proved easily damaged. At its core, the T4 used a CdS meter, which also became a weak spot, with many today having non-functioning meters. But the mechanical nature allowed the camera to continue use and the Copal CCS-M shutter remained bulletproof and even responded well in cold weather. The T4 also was smaller and lighter than any other in the T-Series, and was the first to only be available in black and was the first to have the ability to use an autowinder. But the T4 proved short-lived as many cameras were starting to integrate more electronics, and production ceased in 1979. It was the final T-Series camera, replaced by the electronic FS-1.

Impressions
The T4 is a nice enough looking camera; it is both small and light. As for the camera layout, there’s nothing out of the ordinary everything is well laid out and easily accessible. Not to mention that leatherette coating is super soft, making it easy to hold. While my copy never came with an autowinder, I think that would seriously change the balance of the camera. But the best part about the camera is the viewfinder, for the age of the camera, it is bright and has plenty of feedback. By setting the lens to AE, you engage the shutter priority mode, while you can’t see what your shutter speed is, the needle will indicate your aperture. It will also help when metering manually, somewhat of a different match needle system. In general, the T4 doesn’t look like much, but it does have it where it counts, plus without a lens, the body easily fits in a jacket pocket.

Experiences
The T4 is one of the smoothest operating cameras out there. Everything about the camera just works, from the shutter speed to aperture ring. Loading the film is no different from any other contemporary camera and having the camera be a shutter priority certainly helps. Setting the camera into semi-automatic mode is easy, just lock the lens into the AE position, and all AR-Mount lenses have that feature both the older and newer style lenses. Then set the shutter speed, your aperture will be displayed in the viewfinder. The shutter and mirror slap is satisfying but not distracting or detracting. And the focusing ring on the lenses is just as buttery as the rest of the camera controls. Mounting the lens is easy and requires no strange trick. The T4 just works, nothing special, nothing noteworthy. Very much a K-Car of a camera.

Optics
Now the spot where the Autoreflex line and as a result, all Konica cameras is the optics. Right from the start, the Hexanon line of lenses has proved some of the sharpest out there, without getting into expensive German optics. Some of the best ones out there are the 35mm f/2.8, the 40mm f/1.7 and 50mm f/1.7. While I have gotten rid of the camera body, I have kept the 35mm and 50mm lenses for use on my a6000. What makes the lenses even better is that even the older versions work seamlessly with the modern cameras and the shutter priority semi-automatic exposure. Now I never actually used the 35mm on the camera, but that 50/1.7 is something else. It is a real shame that when Konica and Minolta merged that Minolta did not start adapting the Hexanon glass for the A-Mount for their late-model SLRs. You might have even seen some of these lenses still today with the Sony Alpha line. That said, the Hexanon glass performs wonderfully on my a6000.

Lowdown
While the T4 is an excellent camera, but it does suffer a couple of issues that make it not exactly the best investment. First is that it takes mercury batteries (despite being produced in the late 1970s) and secondly the meter isn’t exactly the most reliable. And don’t be surprised if you find one with a non-functioning meter. And while you can find them cheap most on the used market have a price range between 120 to 160$. Honestly, if you come across one with a selection of lenses, it’s well worth the investment and get an adapter to mount it on your mirrorless camera for a good set of optics without breaking the bank on Zeiss or Leitz optics. And while I have gotten rid of mine, I know it went to a good home, and I was lucky to find one with a working meter and battery.