There are certain brand names in cameras and even models of cameras that carry a certain quality that goes along with it, and often the idea that the simple matter of owning one will improve the quality of your photographs by extension. One of those names is Leica. The Leica has been attached to many greats within the world of photography. The Barnack Leicas are among those cameras and have created great images in the hands of famous photographers. So I went into this and found a good camera at a fair price, but I soon found that maybe Leica wasn’t for me, having gone through two different Leica III cameras (a IIIf and this IIIc). But hey, at least in the case of both cameras I know they’re now in the hands of photographers who both use and love the machines. 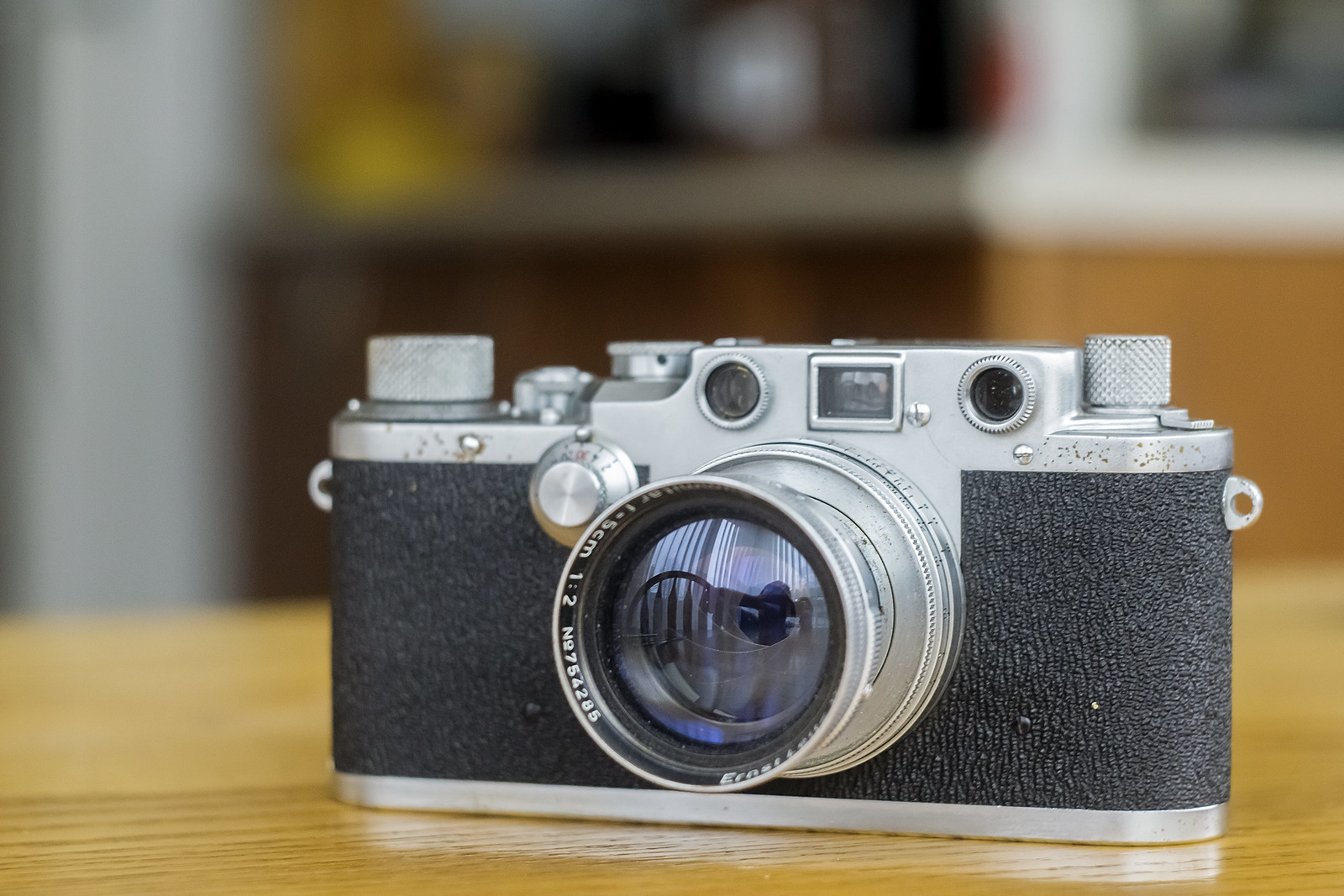 Background
The history of the Leica camera does not begin with Leitz or in Wetzlar, it begins on the 1st of November 1879. One Oskar Barnack is born and soon has the dream of becoming a landscape painter his father, however, had other ideas and sent Oskar to learn how to build mechanical models of the solar system. Oskar learned how to build the models well and gained an appreciation for the creation of delicate mechanical movements. Released early due to his aptitude, he gained a reputation for excellent workmanship and in 1902 began working for Carl Zeiss in Jena. While at Zeiss he rediscovered his love of landscapes but through photography. The problem was that his asthma made it hard to carry the 5×7 plate camera for any length of time. And while he tried to create a smaller camera, he became displeased at the quality of the images the smaller negatives produced. But his health forced him to seek warmer weather. In 1910, at the recommendation of a former co-worker at Zeiss, Barnack joined Leitz as their master mechanic. He began to use his skills to help build better quality lens polishing machines and technics and earned friendship of Ernst Leitz. Leitz aimed to branch out from the microscope industry into the field of motion picture projectors, but there were no lightweight motion picture cameras nor rentable films. Oskar worked and designed not only an aluminium motion picture camera but a lightmeter for that camera to ensure that the film would be properly exposed. The creation of the camera made Oskar revisit his idea of a small scale camera but using the 35mm motion picture film. The negative size of 18x24mm proved troublesome, so Oskar doubled the width from 18mm to 36mm and maintained the height of 24mm. Next was the lens, the Zeiss Kino Tessar 40mm did not have the needed image circle coverage, nor did the Leitz Macro Summar 64mm. Leitz’s chief lens designer stepped in. Max Berek produced an Anastigmat 50mm f/3.5 lens, putting the name Elmax on the lens. Oskar would put all the pieces together his first prototype in 1913. Today these first prototypes are known as Ur-Leicas. When war were declared in 1914, Leitz turned to war production of optics for military purposes and the prototype which showed promise were left behind. The Great War cost Germany dearly both in material, moral, and the terms of the Treaty of Versailles. The death of Leitz in 1920 did not help matters, but Oskar unwilling to let go of his idea presented it to Ernst Leitz II in 1923 and convinced the company head to produce a series of prototypes. The Null Series (Leica 0) saw limited production, between 25-31 units were a near-instant success and could help make Leitz a viable business. At the Leipzig Spring Fair of 1925, the Leica A broke onto the scene. A production run of 1,000 units was produced and sold like hotcakes. The Leica A was a camera designed from the ground up with quality optics, the original Anastigmat initially then a final version of the Elmax (rare copies have a Hektor lens) and the use of the 35mm film format. The next update came with the release of the Leica C in 1930 which introduced the idea of interchangeable lenses, an idea that produced the standardized Leica Thread Mount (M39) with the Leica E (Leica Standard or Leica I). The original Leicas were not rangefinders, so Leitz introduced the Leica II the same year which integrated a rangefinder into the camera, and many Leica I owners sent their cameras in for upgrades. The next update came in 1933 with the release of the Leica III which is basically a Leica II but with slow shutter speeds, adding Time and speeds from 1″ to 1/10″ using a secondary shutter speed dial. The speeds were improved again with the release of the IIIa in 1935 which added a top shutter speed of 1/1000″ to compete with the Contax line of cameras. The IIIb version in 1938 moved the rangefinder window next to the viewfinder. The biggest update to the III line came in 1940 with the introduction of the IIIc. Rather than have a camera body built out of multiple pieces, the IIIc’s body was a single die-cast body which also increased the length by 3mm. There were also improvements in the internal components, a larger shutter release, and a better frame counter. Leitz also included these improvements on the older models, the IIc and Ic lack the slow speeds and the Ic lacked a rangefinder. Production lasted through the war and some even were produced for the Third Reich (although most were Soviet-built copies). The IIIc ceased production in 1951 with the IIIf adding flash synchronization (after the fashion) and the final version the IIIg came in 1956 which would be the final Barnack Leica ending in 1960.

Impressions
As cameras go, the IIIc is a slick-looking camera although there is a certain complication to the controls and functionality. But the IIIc offers a small full-frame rangefinder that cuts an iconic figure. And that is one of the reasons I was drawn to the Barnack Leicas. They do look nice and they carry a certain quality to their name. Well machined and well-engineered and at first you want to shoot with them. That said unless you’ve used one before they aren’t the easiest camera to use. Everything is well laid out, the shutter speed dial is split into two different dials, one for the main speeds the second for slow speeds. Also as the camera was designed well before some of the standards we’re used to today with leavers, everything is done through knurled knobs, film advance, film rewind, and others. The camera lacks a combined view/rangefinder window which some might find hard to operate and for someone who always wears glasses, it is very difficult to operate. But even in a non-functioning state the camera certainly looks amazing sitting on a shelf.

Experiences
If you’ve never used one of these cameras and aren’t used to early to mid-20th-century cameras you’ll either find yourself loving them or hating them. Sorry, no middle ground here. The first thing you’ll find hard is loading, like all Leica cameras, the III series is a bottom loader. But unlike modern M-Series cameras, you do need to trim your leader. And if you don’t get things just right your film won’t load. In fact, I only successfully loaded it a handful of times. Using the camera isn’t too bad beyond that, but you do have to adjust how you take photos. Because the rangefinder window is small it can be hard to use for regular shooting, using the hyperfocal theory you can shoot the camera far faster than having to compose then focus. Once you have that down, the camera becomes far easier, also using Sunny-16 due to the lack of an onboard meter, but a Voigtlander VCII or a ReviniLabs would not go amiss for compact and shoe mounting. Rewinding the film is easy with the rewind knob being able to continue while pulling it up from the top part of the body.

Optics
Here is where all Leica cameras have earned their near-legendary status. The optics on all Leica cameras are second to none and along with the quality of the cameras are what make Lecia cameras what they are. And there are plenty of LTM (M39) lenses available for the camera, but if you want someplace to start, the least expensive is the Leitz Elmar 50mm f/3.5 the successor to the original Elmax lens designed for the Ur-Leica. Even though it’s only an f/3.5 it produces excellent images. But if you want the truly sexy lens, then the Summitar 50mm f/2 is the lens you want but it does come with a premium price attached. But no matter what lens you get you will get results. Now there is the temptation to use non-Leitz glass on the camera, while a Soviet lens will work, there is always the trouble with focusing as often the Soviet glass has a different interface for the focusing cam, but it mostly does happen at the infinity mark, so don’t let that bother you too much, just stop down and trust hyperfocal.

Lowdown
I don’t like Leica cameras, while the M-Series is a far better choice but they cost you a premium as will the optics. So if you want solid Leitz optics in a more affordable package then check out the Barnack Leica, but honestly go with a later model, a IIIf or IIIg as they are far younger. But the name comes with a price tag, even without a lens you’re looking at 300 to 600 dollars on the used market. And there are far better and easier cameras to operate and use, but only a few will only give you the optical quality you’ll get out to he Leitz glass, Zeiss comes close. Of course, you could go Soviet with a FED or Zorki unit, and some of those might even be Leica branded. But honestly don’t take my word, read below at the folks who have had far better experiences.