Way make in the early days of my film photography journey and having a lot of influence from the Film Photography Podcast I dove deep into the wonderful world of Polaroid photography. Now it wasn’t that I didn’t know about Polaroid, I had shot the format before but only the Type-600 integral stock. But through the FPP I learned about pack film, which if you know the song is where the phrase ‘shake it like a polaroid picture’ has its origins. After making a donation to the FPP I ended up receiving a Polaroid ColorPack II camera right from Michael Raso’s personal collection. The ColorPack was little more than a gateway drug to Polaroid Pack films. I quickly learned about the Automatic Land Cameras. I began seeking them out, my first, a Polaroid Automatic Land Camera Model 240, which came along on my first big solo road trip. At the tail end of that road trip, I happened across an antique store in Milan, Ohio, by this point, my 240 developed pinholes in the bellows which produced fun and weird images. In that store, I found sitting in a dusty box with all the accessories the Model 250. And the prices at that time had not yet skyrocketed. With a twenty out of my wallet, I walked away with this beauty. And the 250 lasted me until I learned of the end of Fujifilm production of their FP films. 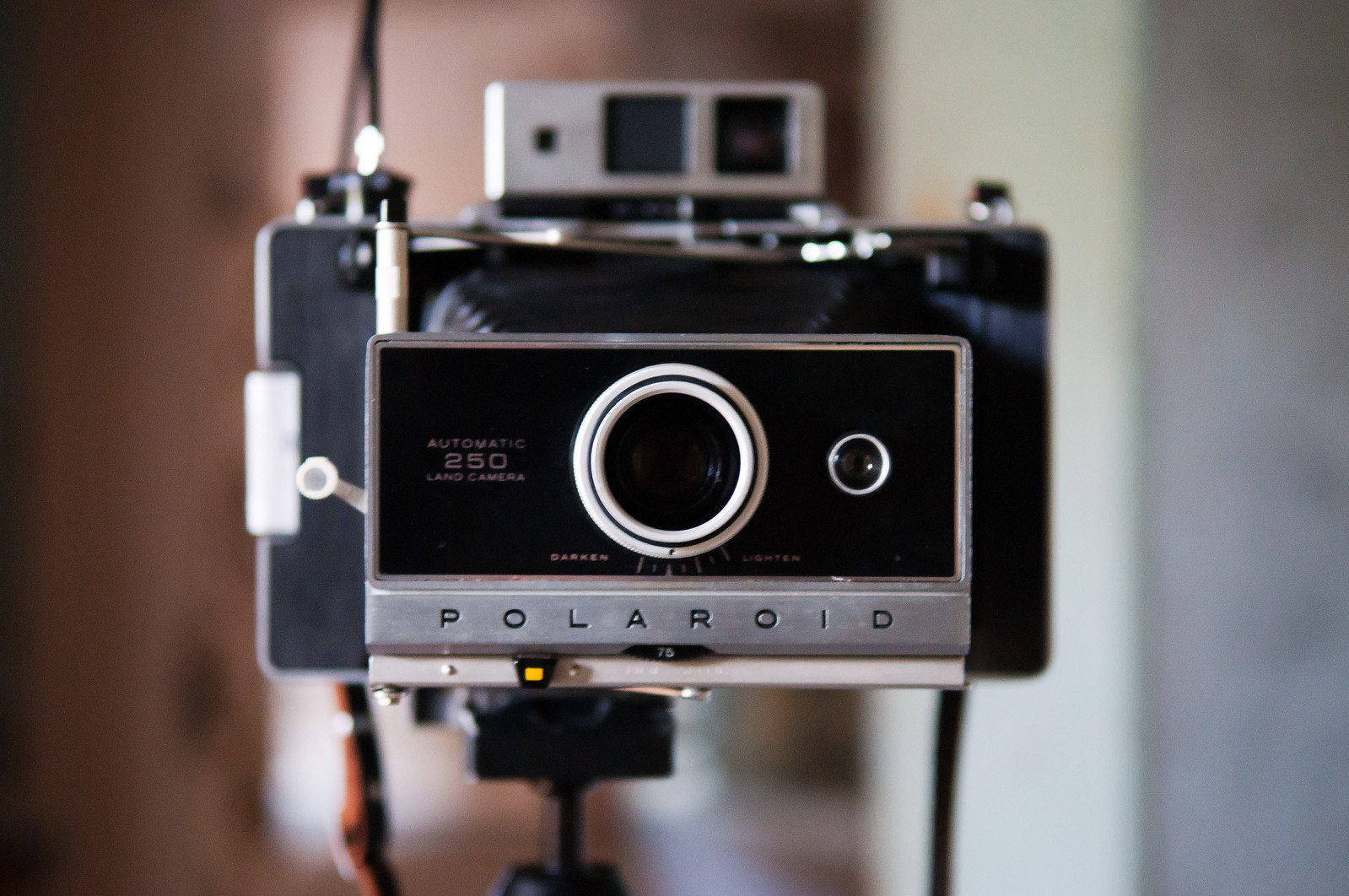 Background
In 1932 Edwin Land established Land-Wheelwright Laboratories with his former physics professor, George Wheelwright. Together they began producing polarised lenses for military applications. By 1937 the company changed the name to Polaroid. However, it wasn’t until 1943 that Land started to experiment in instant photography. Land developed a system that exposed a negative, and using a reagent transferred the image to a positive print. In 1947 he demonstrated the process to the public. A year later in 1948, the first camera, or rather Land Camera came onto the market, the Model 95. If you’re a sharp-eyed viewer, you’ll realise that an episode of M*A*S*H had one such camera as a central plot point. The trouble with these early cameras and film is that they came in rolls, took about a minute to fully develop and only produced a sepia or black & white image. These early cameras also lacked any automatic functionality and were heavy, bulky, and relied on either manual exposure or a clip-on meter. In 1963 Polaroid introduced two new items. The first being a colour instant film and a new instant film format. The new format came in a pack of ten shots, sized at 3.25″ x 4.25″ known as Type-100. The film matched the new line of Land Cameras. Released in 1963, the Automatic Land Camera proved not only smaller than their predecessor but allowed for near full automatic functionality, all you had to do was set the ASA rating which adjusted the aperture. An electric eye next to the lens set the shutter speed automatically. The new cameras were close to the same design but opted for a default orientation of landscape opposed to portrait but kept the same bellows design. The lens, a glass triplet design at 114mm and f/8.8, an all-metal body with some plastic pieces. The view/rangefinder would fold down when the camera was not in use. The Model 100 would be the first of a long line of cameras that shared a similar design. The 100 series ended between 1966 and 1967. By the release of the Model 200 line, there was a clear gap between the low and high-end models. With low-end models being made almost entirely of plastic and having no rangefinder and the viewfinder being permanently fixed upright. The Model 250 is practically a direct successor to the Model 100 with the same all-metal construction and flip-down rangefinder, which was produced by Zeiss Ikon. Early versions had a far larger viewfinder than the later production units. Production of the 250 ended in 1969 and succeeded by the Model 350 which featured a built-in development timer. A feature that was an accessory on the 250 (mine had an analogue-style timer on the back door). The Automatic Land Cameras ended in 1976, by which point Polaroid had embraced the integral film with the SX-70. Although production of the film continued until 2008 when Polaroid went under. Fujifilm continued producing its version of the Type-100 film until 2016. New55 attempted to produce a new version of Type-100. Still, it never succeeded, however, several men who were involved in the Impossible Project successfully delivered a new version of Type-100 film called One Instant last year.

Impressions
There is a certain level of old school charm to the Auto 250. As a pack film camera, there is a certain size to accommodate the larger format of the Type-100 film. And yet, the one thing that drew me into the Automatic Land Camera models is was the draw for me is how small you can make these cameras. When the camera is folded up, it is surprisingly compact, especially the models that have the fold-down finder. I could easily carry the camera everywhere without too much extra weight in a camera bag. Plus the camera cuts a fine figure when fully deployed. One thing that does set the 250 and other higher-spec models is that the camera is a rangefinder rather than a zone/guess focus. And then there is the simple fact the camera just looks sexy. And it is a camera that is designed to be used by anyone and everyone without too much difficulty. Everything is labelled in the order that you should be using the different controls, steps 1 through 4. These controls are easy, big, and well laid out. I honestly took to the camera right off the bat, and I rarely missed a shot due to focus or exposure issues. I only missed shots when I made a mistake. And while I’m a little sad, I had to offload the 250, but keeping around would not be an option as I lacked the room to store it and display the camera properly.

Experiences
If you have never used a pack film camera before then any of the automatic land cameras would be an excellent place to start, they are easy to operate that work well with little in the way of user interference. The one thing that is key for ease of use is the mantra, no violence. You still have to be a little firm, but not overly. Once the dark slide (paper) is pulled, you’re ready to shoot. Just make sure to set the film speed, on these cameras that control the aperture, and on the 250 you have a wide range, just set the dial to the number closes to the speed you’re shooting, then the electric eye will set the shutter speed. As I mentioned in the previous paragraph shooting the auto land cameras is as easy as one, two, three, four. Set the focus using the slide atop the bellows; it’s coupled with the rangefinder which is big, bright and part of the viewfinder. The finder has frame lines to help with composition. Then set the shutter cock, fire the shot, and then pull the tab. Wait the allotted time, and peel back. Then you can shake it like a Polaroid Picture and Outkast likes to sing. That said, there is one piece of caution, Packfilm does go bad and often goes bad to the point that it will no longer work, so watch out sometimes those expired packs of Polaroid film are cheap for a reason. Unless you’re sure how they have been stored, stick to modern films like Fuji FP-100c which is some of the last stocks to be produced before the OneInstant stuff hit the market. But honestly, the best experience is watching people see their images right away in a nice, frameable print. My best time with the Auto 250 was at a Help Portrait event where I shot a frame of the family, gave it to one of the kids to ‘hold onto’ then after shooting some digital frames, took the print back, peeled it off and showed them. Pure Magic.

Optics
When Polaroid replaced their first run auto land cameras (1xx) with the 2xx series, they started to differentiate with low, mid, and high spec models. The low range models had fixed finders and plastic lenses. The Model 250 is a high-spec model. While the lenses of these cameras aren’t to the same level as lenses on your 35mm SLRs or even Medium format cameras, they are no slouches. The Triplet (3-Element) design is a solid performer, but it does have some drawbacks. At 114mm it isn’t a wide-angle lens, it’s a little more of a ‘normal’ lens, and at f/8.8 it is perhaps the slowest lens I’ve had to use outside of a box camera. But you don’t buy a Polaroid camera for the lenses; you don’t, you buy them for the magic of instant photography. Yet, I never looked at a shot taken on the 250 and went ‘man that is too soft’ these aren’t super sharp, but sharpness is overrated, the world is not sharp. But the lens is not overly soft in a ‘box-camera’ sort of way.

Lowdown
The days of Polaroid being an easy choice of camera to buy and shoot are long over. While you can get good functional packs of Fuji film, the cost of them has skyrocketed since the cancellation. And the new One Instant stuff isn’t inexpensive either. So while I cannot easily recommend any of these automatic land cameras only from a cost approach, but you should look away from them either, and any of the x50 models will be a strong choice. And by x50, I mean the 250, 350, and 450 models. The one thing you do need to watch out for is that battery issue, but honestly don’t let that stop you. Swapping out that battery for a 3 AAA holder is easily done, or ask someone who is a bit handier with the soldering iron. If you do plan on purchasing one now is the time, most can be had for well under 100$ I’m seeing them between 25 and 60 on the used market. But there are a couple of cautions, first is the battery make sure that the compartment is clean and that the seller has tested the camera with a battery (or batteries). Second is the bellows, make sure that again you test the bellows before jumping in, a flashlight test is a good idea if possible.