When it comes to reviewing film cameras when I first started back in 2015 I thought was among the first to be doing so, as it turns out I probably was based on the times that a few fellow alliance members have been around reviewing film cameras. Throughout the previous 120 camera reviews, I can count on one hand the number of times I’ve considered a hand-built camera, that number is one. Reviewing a homemade camera is difficult mostly because there’s a strong chance no one else has reviewed it or in the case of today’s camera even shot it outside the person who built the thing. Of course, being the only who has shot and reviewed a camera outside its maker is both a blessing and a curse. A blessing in the sense that you won’t have to worry about any initial biases from other bloggers, a curse because there’s no other source or benchmark beside the maker who is already biassed towards their creation. Who doesn’t like to be on the bleeding edge? Today’s camera comes from a fellow film shooter and member of the Toronto Film Shooters Meetup and generally all-around good dude, Matt Bechberger, who recently launched and was brilliantly successful in kickstarting a small shoe mounted light meter. 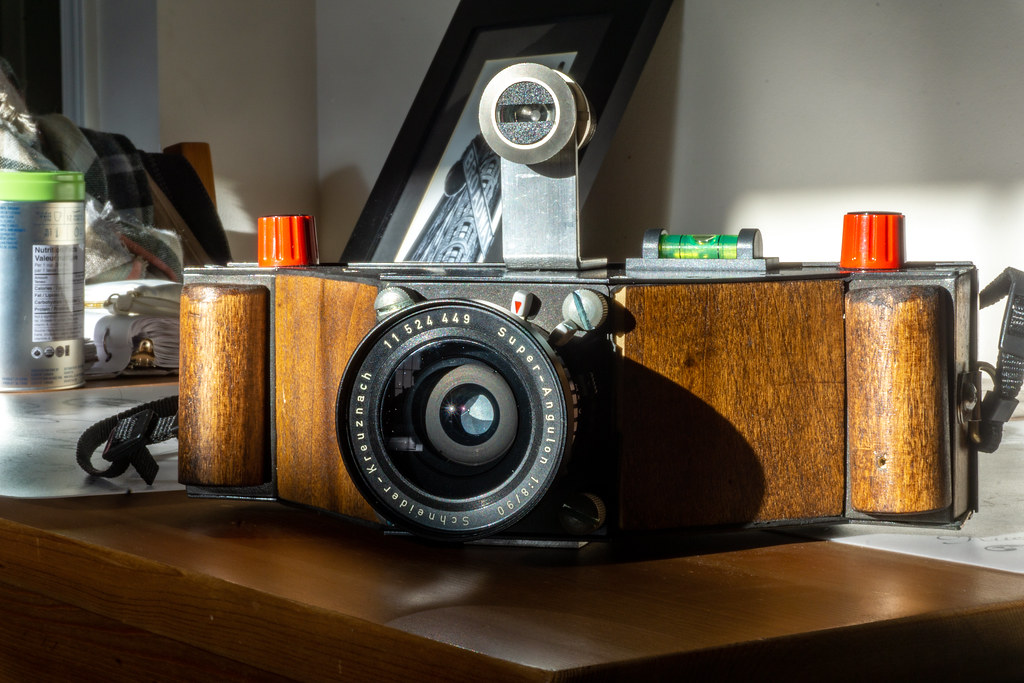 Background
Panoramic cameras are nothing new, and Matt took plenty of inspiration from the large format roll film panoramic cameras and sheet based ‘banquet’ cameras used for capturing large groups. But smaller format panoramic cameras are also not a new thing, the swing lens Widelux and Russian (and Lomography) Horizon cameras are also a popular camera among photographers. Then there’s the Fuji G617 and GX617 cameras plus the Hasselblad X-Pan. But many of these are prohibitively expensive, and the film can only be ordered once a year. So Matt decided that he had the skills needed to build something to do the same thing as many of these expensive cameras. A swing lens system is a bit harder to engineer from scratch, so he went with a fixed lens camera. The lens is the key part as it will determine the overall dimensions of the camera and the exposure size. Using 3D CAD to mock up the camera allows for later precision machining of the metal and wood components. Of course, no design is perfect and after some light, testing to check for leaks, Matt, also runs through several test rolls to ensure that the camera is light-tight and there’s little in the way of light bouncing around inside.

Impressions
At first glance, the 617 looks like an old camera. And don’t take this in a bad way, the 617 is a handsome heavy camera. But you can see the care taken in its construction. With the wood finish on the front and the ‘handles’ along with the side, pieces make a nice touch. The metalwork is superb, and everything fits together well. While the camera does come with a strap, it’s almost useless because you cannot easily shoot the 617 by hand. Matt took great care and even machined a proper viewfinder to show off your composition, which does make the use of the camera much easier. All the exposure controls are mounted on the lens itself, and the camera sports a massive 90mm Super-Angulon lens, which can be swapped out if you want something wider or narrower. The shutter is a Syncro-Compur leaf shutter with speeds from 1″ to 1/500″ plus bulb and apertures from f/8 to f/64. The back is held on with two thumbscrews and had good light traps and sealing all around. The film advance is a manual task, because of the nature of the camera, you’re presented with three windows on the back, you’ll be using the bottom of the three windows (I made that mistake with the original roll). The only weak point on the camera design is the film compartments which aren’t too snug, which did result in some fat rolls when the film is completely shot. Maybe some improvements for later marks in the 617. But in general, a solid camera that certainly will turn heads, I know it did when I had it out.

Experiences
When it comes to shooting with the 617, think of it more like a 4×5 view camera combined with an old box camera. Loading the film is fairly tricky with the two spools being a little loose inside the camera itself and with the length of each exposure, you’re at the starting arrow as soon as the leader is pulled across. There’s no automatic advance here, everything is done through a blue window, you’ll be using the 6×4.5 numbers, but also they’re at the bottom window (the roll is loaded upside down), you’ll start on exposure 2. I made a point to use an old expired roll of colour film to make sure I was doing this right. With the camera being panoramic you’ll want it to be as close to level as possible, thankfully a spirit level can help with that aspect. A viewfinder also helps with composition and the 90mm lens offers a super wide-angle. There’s no light meter, so make sure to keep one close and always shoot the camera on a tripod. Advancing the film can be tricky, you have to use both knobs to wind the film on the take-up spool while advancing it in unison with the sending spool, from the first shot on “2” you advance by four frames, so the next stop is “6” then “10” then “14” before winding it to the end. Yes, you do only get four shots on a roll so pick your exposures wisely. If you’re used to working a 4×5 camera or anything with a lens mounted shutter, you’ll be in luck as the lens has that feature. The one thing you’ll have to watch out for is fat rolls; I ended up with one such roll, thankfully I was able to keep one in the camera and stuck the first roll in a box and a pocket as quickly as I could. Because I swapped out the film in a dim area and got the fat roll into a box I only ended up with a bit of damage. And ended up getting seven out of the eight frames I shot looking good, the eighth is only because I didn’t think about the position of the sun. And speaking on that, you do get a lot of flares, so watch that sun position, you do want its light on your subject coming from behind you as much as possible.

Optics
Here is where the 617 stands out. The camera uses large-format optics, specifically designed around wide-angle lenses. Now the lens I did consider fixed, but at second glance you can swap the glass out, but you’ll have to mount your lens on the small board that comes with the camera. In this case, the 617 is equipped with wonderful Schneider-Kreuznach glass, a 90mm Super-Angulon. I have plenty of experience with S-K Angulon lenses, my primary wide-angle lens for my Crown Graphic is the older version of this lens. If you are planning on swapping it out for something wider you do have to consider image circle, I would highly recommend working with a lens designed for 4×5. Now there’s no focus on control on the camera in the form of a focusing helical. However, you do have some control using the aperture to control the depth of field. Being a large format shooter and having a lens that stops down to f/64, you know that I shot all the images in this review on that aperture. Again because I wanted to ensure as much of the frame would be in focus.

Lowdown
When it comes to the 617, it’s a fun camera that is highly-specialised and not one for everyday use at least in my opinion. That said, I did have fun shooting it despite the frustrations around the film advance and fat rolls. Would I invest in a 6×17 camera? If I were doing more landscape and urban exploration work in the big empty, I certainly would, but these days I’m not one for either. It is a camera made more of the rural areas of Canada than the urban spaces I tend to frequent more often. I’m just thinking of how awesome this camera would have been in places like the R.L. Hearn Power Station, Hamilton’s Firestone Plant, and ENKA. And while still a prototype camera, I can certainly see the draw and hope that Matt will continue to improve upon the design and make something amazing. Now the ReveniLabs Six-One-Seven is a one-off camera at the moment, and I’m not sure if Matt is going into full production of the model. However, if you are looking for a commercial 6×17 camera, the one to get is the Fuji GX617 and if you want to read an excellent review of that camera, you can visit the one written on Emulsive.org.