When I started building my Minolta A-Mount kit, the Maxxum 100/2.8 Macro was not the first choice for a short telephoto lens. Instead, I was more drawn to the 135mm f/2.8 lens, only because Minolta did not have a 105, which has always been my preferred short telephoto prime lens. It wouldn’t be until a Toronto Film Shooters event last year hosted by Burlington Camera that I had the chance to try out the 100mm macro for the first time care of my good friend James McFarlane. While I wasn’t completely sold at that point, I wasn’t completely turned off the lens either. That lovely grey in-between state. I continued to look for a deal on the 135mm lens; sadly, no sales were to be found. I had a hard time finding one period on the used market that wasn’t prohibitively expensive. Another trip to Burlington Camera saw me walking out with the 100mm macro, at a fair price. And the more I use the lens, the more I like it, I guess it’s close enough to that favoured 105mm length for the cost. 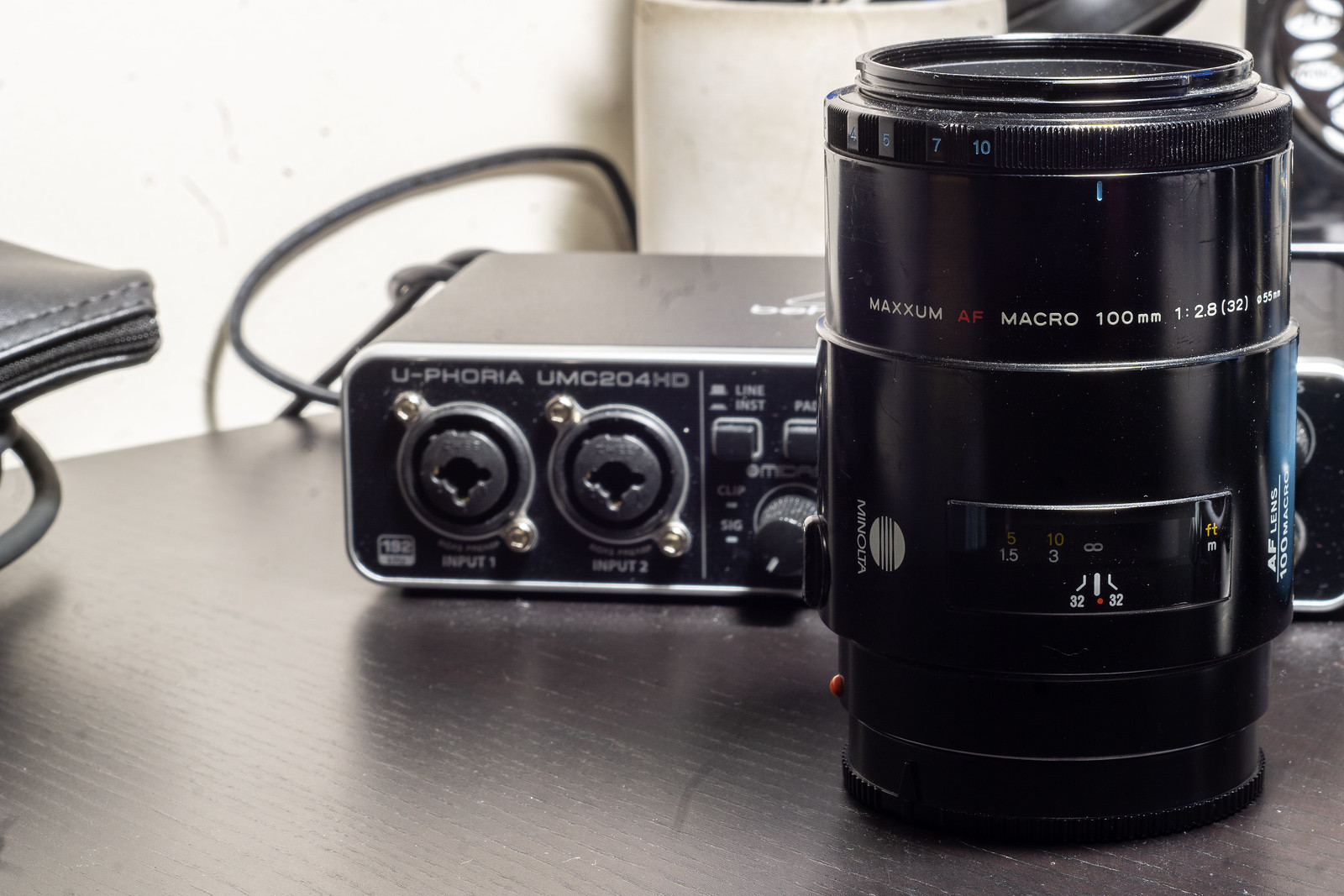 Build Quality
Despite having a plastic shell, much of the lens is constructed of metal. Some of the metal does have rubber coating, and other controls (such as the focus limiter) are made of plastic. The lens mount is constructed of metal, but so is the filter mount. The filter size for the lens is 55mm so nothing too strange or too big to make life expensive. There is no integrated hood, but a bayonet mount one is available. Overall the lens build quality is excellent but not too heavy, so it doesn’t change the centre of gravity on the camera it has been mounted on. I never had the change to try the lens out on my Maxxum 7000, but it sure feels good on the Maxxum 9 with the grip and makes it easy to carry around for long periods. Optically the lens construction is excellent, the eight by eight construction allows for superior quality both in macro and regular operations, and the addition of the focus limiter is helpful when you don’t need that super close focus. History wise there are four versions of the lens, while the optical construction has not changed, there have been some minor adjustments. The initial version, first seen in 1986 (and the release of the lens I have) is one of the best versions as it has the majority metal construction a top quality including the focusing limiter switch. The second version released in 1993 downgraded the focus scale to have both scales in white and changed the focus ring to plastic with rubber coating. They did add a focus lock switch. In 2000 the “D” version came out which increased the size of the focus ring and allowed for communication of the focus distance for better flash work. The focus limiter and lock switches were retained. In 2006 when Sony purchased Konica-Minolta’s camera division, they took over the lenses and the current model the Sony 100mm Macro remains the same lens as the 2000 version. Still, it has allowed all the same features, optical construction and capabilities in a shorter package.

Image Quality
The images out of the lens are stunning. There’s no distortion at all when it comes to straight lines. The one interesting thing is that when you’re shooting wide open (f/2.8) is that there is a noticeable fall off at the corners, which by f/4 is completely gone, so it’s of little mind. Because we’re talking a short telephoto lens, don’t expect the same depth of field that you get with shorter lenses. You’re not having a lot of depth of field until you get above f/8, you don’t see all three figures in focus until you’re stopped down to f/32. The good part is that you can get excellent subject separation even at a higher than expected aperture. I’m rather fond of the out-of-focus elements from the lens, while the blades are straight, they produce a soft rendering of the out of focus areas. Despite this, the areas that are in focus are sharp at all apertures even with the falloff wide open. Personally, my favourite aspect of the lens is the macro feature, as strange as it sounds. The 1:1 magnification factor and close focusing feature combined with the smooth bokeh and sharpness make it perfect for such applications.

Applications
Despite being a Macro lens, you can use the lens for so much more. As a short telephoto lens, it makes an excellent carry along for a ‘three lens kit’ when travelling and doesn’t add too much weight to your kit. As a Macro lens, the optics provide actual 1:1 magnification, allowing full life-sized reproduction, not to mention a 35cm close-focus ability. But don’t think you have to use the lens just for macro work. The fast aperture (f/2.8) and 100mm focal length make the lens a perfect portrait lens allowing for excellent separation of the subject from the background. If you’re into street photography and go for a more indirect approach, then the 100mm won’t let you down either, I have also used the lens to capture architectural details while travelling. And finally, the lens will be the perfect addition for low-light event work when paired with a Minolta flash or photojournalism. Not bad for a macro lens!

The Low Down
As I mentioned in the introduction, it took me a bit of time to warm up to this lens, but after I did, I hardly head out on a trip without the lens in the bag. Despite being a macro lens and I don’t shoot a lot of macro work, it’s good to have a lens that has that option. But it has been invaluable for catching details on buildings, getting shots at weddings and being an excellent portrait option. Now, these are readily available on the used market, and there have been four versions. If you are running primarily as a film shooter, then the first two versions are good options, mainly digital the modern Sony or the D-Type lens is a good choice. But any version will work on any Maxxum camera, even the original 1986 will sing on a modern A99 digital SLR. While not super expensive on the used market, they aren’t the cheapest lens either. At the low end expect to pay between 100 and 200 dollars for the earlier models. The newer ones can run between 200 and 300 or more. But as a solid do-it-all short telephoto lens the Maxxum 100/2.8 certainly is a winner in my book.