When it comes to TLRs, there are plenty of choices out there and in many cases will cost you a fair amount of money. I’m talking Yashica, Minolta, Mamiya, and Rolleiflex plus several other upper-crust cameras. But for me, these were a second step (Yashica-12) and third step (Rolleiflex 2.8F) in my journey of Twin-Lens cameras. My first TLR is a true Soviet-era classic and a gateway drug into the wonders of both 120 film but also TLRs in general, and that is the Lubitel 2. Built by ЛOMO (LOMO) or Ленинградское Oптико-Mеханическое Oбъединение translated Leningrad Optical Mechanical Association one of the pillars of the Soviet camera industry, the Lubitel 2 is a copy of the Voigtländer Brillant with many improvements over the German camera. And is actually the second version of the Lubitel line. In Russian Lubitel or Любитель translated means amateur is the third and final camera based on the design of the Brilliant. While the obvious design cues were dropped with the Lubitel 166 in 1980, you can still purchase these cameras new today from Lomography. But when I first purchased mine at an antique show in 2009 for a total of 25$ and was immediately blown away by how sturdy the camera was and fell for the optics these were like nothing I ever had shot with before! And while mine copy featured the English nameplate, proudly written on the side Сделано в СССР or Made in the USSR. 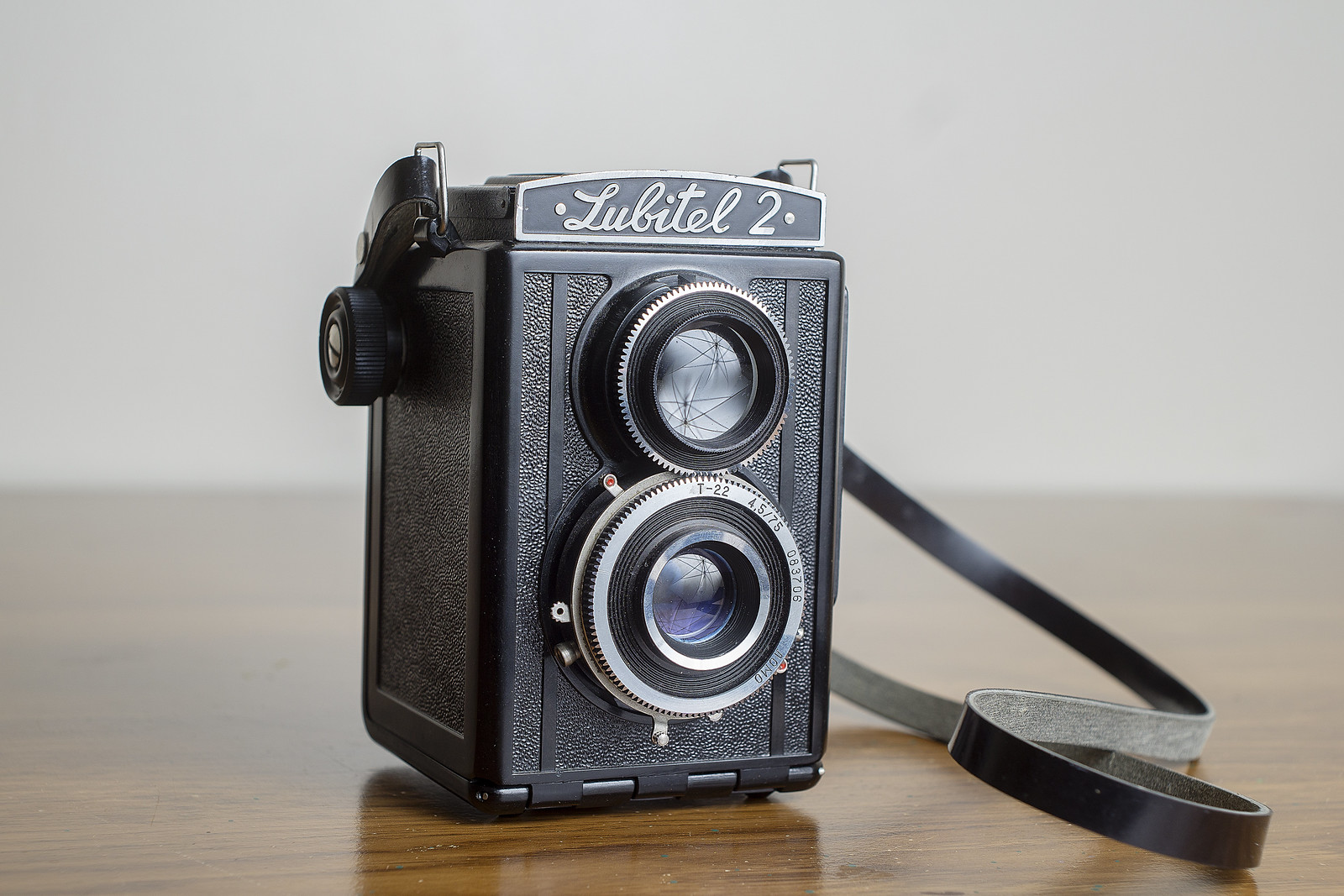 Background
The story of the Lubitel, like most Soviet cameras, begins in Germany. The Voigtländer Brilliant a pseudo-TLR released in 1932 proved a popular simple use camera with zone focusing. Like most Voigtländer cameras the real power was in the Skopar Anastigmat 75mm f:4,5 lens. The earliest versions of the camera were made from metal, but in 1937 production of the camera switched to bakelite (the world’s first synthetic plastic). And in 1938 a proper TLR, with complete focusing through the waist level finder saw release. These two cameras were, during the Russian invasion of Germany in the latter half of the Second World War ended up on the boards in Leningrad (St. Petersburg) at the GOMZ (ГОМЗ (Государственный оптико-механический завод)) or Gosudarstvennyi Optiko-Mekhanicheskii Zavod, the first and oldest camera manufacturer in the Soviet Union. The engineers at GOMZ got to work and in 1946 released their first copy of the Brilliant, the Komsomolet (Комсомолец). The title was given to the members of the Komsomol, an All-Union Leninist Young Communist League in the USSR. The camera, like the original Brilliant, is a pseudo-TLR with zone focusing. The camera featured a T-21 triplet lens but had limited shutter speeds. Another interesting fact about the Komsomolet is that the camera shoots the standard 6×6 frame size. Still, the red window is calibrated to 6×9 as most 120 films available in the USSR only had markings for 6×9. In 1949 they released a followup camera, the Lubitel (Любитель) translated meaning Amateur. The Lubitel was, despite appearances, a fully functioning TLR with focusing aided by geared lenses allowing the photographer to focus manually. The Lubitel used the same triplet designed lens, this time the T-22 a 75mm f/4.5 taking lens and much more shutter speeds than the previous offering. Also, the red window was now properly set to 6×6. Production ceased on both the Komsomolet and Lubitel in 1956. Not before GOMZ released an updated Lubitel in 1954. The Lubitel 2 is almost the same camera as the original Lubitel but featured a brighter finder and added a focusing loupe. The Lubitel 2 proved popular and became a staple export for the USSR, and some two million units were produced, earning much needed hard currency income for the state. It also explains why you can find the Lubitel 2 with both Latin and Cyrillic nameplates along with many other languages and names. Through the 1960s, GOMZ first became a part of LOOMP or Leningrad Optical and Mechanical Association of Enterprises (ЛООМП or Ленинградское объединение оптико-механических предприятий) which then took on the familiar name of LOMO ( Leningrad Optical-Mechanical Union) or ЛОМО́ (Ленинградское Oптико-Mеханическое Oбъединение) by 1965. Production of the Lubitel 2 ended in 1980. But in true Soviet fashion in 1977 they had released the Lubitel 166. The 166 is much the same camera as the Lubitel with the same lens with plenty of cosmetic updates, LOMO released two additional variants of the 166, the B and Universal with production finally ending in 1988. A modern version, released in 2008 remains under production today for Lomography.

Impressions
It looks like a toy camera; there’s no doubt about that. I also remember the person who was selling the camera scoffing as I paid him for the TLR. He did have far ‘better’ cameras up for sale, but they were a little pricey for me at the time. And while the camera does look like it has no capability to focus, it does have that capacity. But more on that later. The small compact design makes it an easy camera to carry around without a second thought. Overall the design is an old one, you have to remember the camera is based on one first designed in 1932. The body is made from plastic but is a solid build and could probably take some hits, but I honestly wouldn’t recommend dropping the thing. You’ll find several versions of the Lubitel on the market. Some will have traditional Cyrillic text others Latin (like my copy) or even some with a totally different name on the plate. The overall design is clean; most of the controls are mounted along the taking-lens barrel. The design is far from perfect; the focusing loupe is tiny compared to other cameras but can be used effectively. The one interesting thing is that the camera has a built-in compartment to house two filters for the lens. Sadly on my example, the filters were long gone.

Experiences
While I haven’t used one in a while, I can remember enjoying working with the Lubitel 2. I must have latched onto the TLR format quickly as I eventually purchased the Yashica-12 and then Rolleiflex 2.8F. Despite that, the camera does have a less-than-ideal user experience. Loading the film is simple enough if you know how to use a box camera, and the red window at the back is aligned to the standard 6×6 spacing. Just watch out, some modern films don’t render well behind the red window in some lighting conditions. As I mentioned in the previous paragraph, the focusing is done via two lenses linked by a gear-like mechanism, as in the lens barrels have teeth along the edges. In cold weather, the teeth can dig into your fingers, and it isn’t exactly the smoothest or most present experience. But it works in a raw ‘just get it done’ fashion I’ve found in many other Soviet cameras. The waist-level finder is fairly bright (not as bright as other TLRs out there), but it is decent enough for most work. And while there is a focusing loupe, it’s small and hard to use in any major way; I found it far easier to use the main finder without the loupe. However, it can play tricks with your eyes as it suffers from a dancing image. The main functions are all on the lens barrel and are straight forward with an aperture lever and a dial for the shutter speeds, and you have a decent number of apertures and speeds available. There is also a separate lever for the shutter cock and release. Generally, I found the experience pleasing and often resulting in amazing images with a certain flavour about them thanks to the T-22 lens.

Optics
One of the best parts of the Lubitel 2 is the lens, while the T-22 isn’t the best lens out there, it has a certain charm. The lens, based on the Cooke Triplet Design (3 Elements in 3 Groups), first invented in 1893 by the chief engineer for T.Cooke & Sons, Dennis Taylor. In contrast, the LOMO version is slower than other Triplet lenses, being rated at f/4.5 (most being f/3.5 or f/2.8 in a rare case). The real power is how the lens functions at the larger apertures. There’s a lovely swirl to the out-of-focus elements along with a defined fall off at the edges and a sharp centre. It also lends to the notion of the Lubitel as a toy camera. Of course, as soon as you start to stop-down, the effect does vanish. And once you do start stopping the lens down, you’ll find that the images are sharp with good contrast and colour rendering. The one complaint is that the lens is not the fastest out there at only f/4.5 and I did find myself spoiled with the f/3.5 lens on the Yashica-12 and then even more so with the f/2.8 Planar on the Rolleiflex. But you know, neither of those lenses have the same character as you get from the simple T-22.

Lowdown
If you’re looking for one of the simplest true TLRs out there, then the Lubitel 2 will not disappoint. It’s also a brilliant camera, well made, unique optics, and while limited makes for a great introduction into the format. And while I did give mine up and it ended up in an early giveaway for the Film Photography Project, I know that it was well-loved by the person who won the giveaway, even with the Nikon D300 strap attached. Sadly the popularity of Lomography and toy cameras (I don’t actually classify the Lubitel 2 as a toy camera) has driven the price of these up since I first paid 25$ for my copy, they are running close to 100$ on eBay, and that is surprising to me. Still, you can find ones for under that price. I don’t recommend paying the 100$ price tag look for ones that are priced between 45-65$ for a good working copy. Although I’m sure if you’re in central Europe and the former Soviet Bloc finding these cameras are probably going to be far easier to find. If you want a new version of the camera, Lomography still produces the Lubitel 166+ but you’re looking at a nearly 500$ price tag for one. And while I do regret getting rid of mine, I do keep an eye out for an inexpensive and working copy.