One of the film community’s biggest photography trends is the use of speciality motion picture films for regular photographic applications. You saw the rise in popularity in films such as Eastman 2238 and Fuji 4791. Well, Lomography jumped onto the bandwagon with a pair of releases last year. Both were rerolled films from Filmotec/ORWO. The second release of these films came in Babylon 13, with Lomography publishing times for shooting at ASA-12. Having ordered the traditional five-pack, I found that the film, in reality, if ORWO DN21. As the name suggests, DN21 is a duplicating film, acting as an inter-negative between a master positive and a duplicating positive film (stay tuned next month for that film). And because it’s a negative film, developing as a negative will result in far less contrast. The official film speed, according to ORWO, is ASA-16, but Lomography is recommending a rating of either ASA-13 or, in my case, ASA-12. A slight over-exposure, but not too much, meaning I’ll only be pulling slightly in development. Since this film is a motion picture film, I’ll be skipping my traditional D-76, instead opting for the Kodak motion picture developer, D-96. 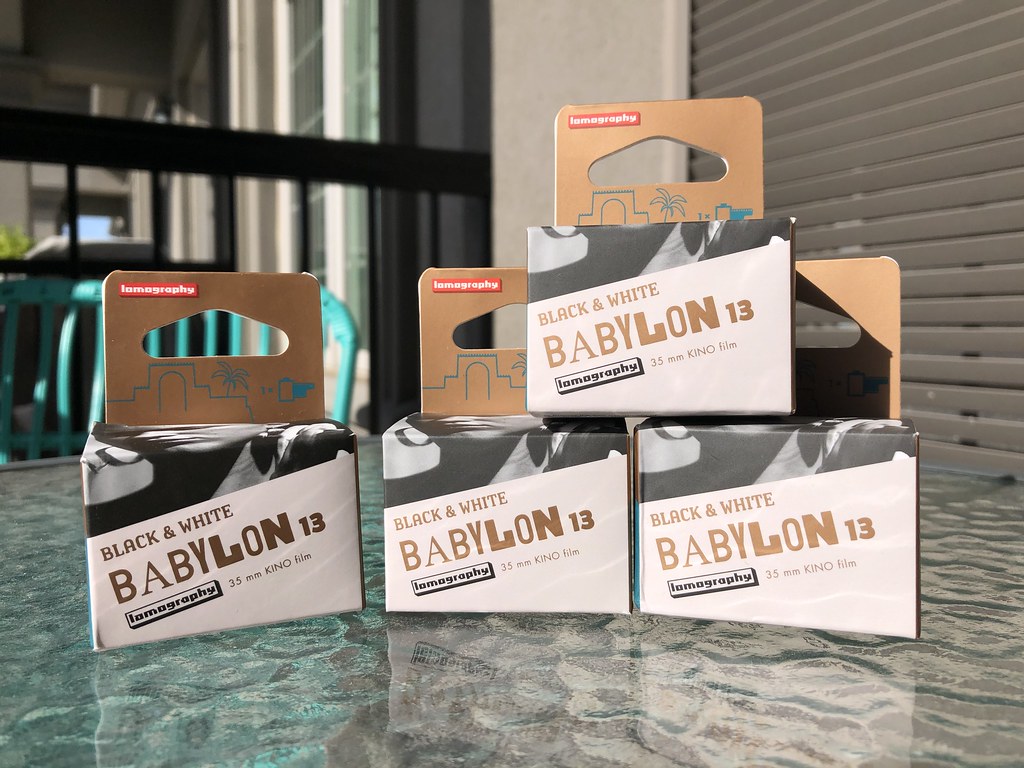 Roll 01 – Kodak D-96
Having shot a roll of Babylon 13 before, I had a general idea of what to expect. What I didn’t expect was how well the film performed under less-than-ideal conditions. The day I went out to shoot was dull and overcast, which gave me a low contrast day. Despite getting apertures between f/5.6 and f/3.5, I still managed to pull off shutter speeds around 1/60 to 1/15 of a second, and shooting a wide-angle lens will reduce camera shake. And the results are stunning. You got an exceptional tonality despite having low contrast. Things are, given the less-than-ideal conditions, surprisingly sharp. And there’s no grain at all. Now the negatives were a little thin when I pulled them out of the tank, but once in the scanner, I saw the detail that I could not see in the negatives themselves. But DN21 is an internegative film, so that it would be designed for some scanning/duplicating process. Either way, the D96 does a fabulous job on the film.

Roll 02 – Ilford Ilfotec HC
Ended up with far better light for the second roll, near direct sunlight the whole time with a bit of cloud cover. I used Ilfotec HC when I first worked with Babylon but used the 1+31 dilution (B) and was fairly impressed with the results, so for the second time around. I used my new go-to dilution for these developers 1+63 (H). Don’t get me wrong; the 1+31 results are excellent, even shot under less-than-ideal conditions. But these souped in 1+63 are smooth. Now, if you like contrast, these are not for you. The contrast is in the middle, about right where I like that. There’s also amazing tonality across the board and a certain brightness to the images that I found the stronger dilution lacked. Also, there’s no surprise that the grain and sharpness remain on point for the film.

Roll 03 – Rodinal
These are my least favourite; it’s not that Rodinal and Babylon are a bad combination. I don’t find it pleasing to the eye. I find the contrast just a touch too strong after seeing the previous two rolls’ results with a wide tonal range between the blacks and white. I find these a little too harsh on the eye. And that should come as no surprise, as the negatives were a bit thin after pulling them out of the tank. A nine-minute developing time did seem a touch short for the dilution given. This combination also gave the first noticeable grain that I’ve seen on the film, no surprise here, but you do get increased edge sharpness with that slight increase. This combination would not be my first choice for future use, but I would go with it in a pinch, giving at least an extra thirty seconds in the soup.

Roll 04 – Ilford Ilfosol 3
I’ll have to admit, the results I got here are actually decent. If you don’t like high contrast, then Ilfosol 3 is your best bet for the film. There is defiantly a middling effect on the film’s contrast, with far more tones brought out then with Rodinal. However, you do lose a bit of the acutance (edge sharpness). But there are a lot more mid-tones in the images as a result. But the negatives will appear thin, don’t let that concern you. Once you get them in the scanner, you’ll get good results. And you end up with moody images, especially in dull, flat light like the day I shot these. While certainly not my favourite, I find these images better than the ones developed in Rodinal.

Final Thoughts
So is Lomography Babylon the last best hope for the low-ISO film? Probably not, but I had to sneak a Babylon 5 joke in here somehow. Of the two low-ISO options from Lomography, Babylon 13 would be the one I can see working with again. Smooth tones, easy to shoot handheld speed of ASA-12 and a negative film not plagued by high-contrast. Plus, it seems to work under almost all lighting conditions. Probably my favourite developer out of all four is Ilfotec HC/Kodak HC-110. It seems to provide the best balance between contrast, tone separation, and sharpness. Having the 1+63 dilution helped out with this, although the 1+31 works well with a bit more contrast. Of course, there are some drawbacks, the first being that as a Lomography film, you do pay a premium. You can also purchase it in bulk from ORWO and roll your own rolls if you prefer. But I like to support at much as I can with a single purchase, so by purchasing from Lomography, not only do I support those fine folks, but also ORWO after a fashion. Just watch out. I’ve heard reports that some rolls are scratched from the factory; I thankfully did not run into that during my review cycle. I had no issues loading the film onto the plastic reels for processing, despite a polyester base. The one thing that I did notice is that it tends to spool up easily (sort of like Efke), but back rolling tight helps reduce the spooling. This spooling also affects how easily it is to scan. I only used my Epson V700 (the Coolscan doesn’t like these speciality motion picture films). The film scans easily with only minor adjustments needed in the editing stage. While certainly not an everyday film, Babylon 13 gets a check in my book.