The year was 2012; I had been shooting film in a far more serious way for three years at that point. I learned of a speciality film store called Freestyle Photographic from an episode of the Film Photography Project. They had all sorts of weird films from Europe that I had never heard of nor seen at my local camera store (which at that time was either Henry’s or Burlington Camera). With companies like Efke and Adox, strange, exotic for my North American sensibilities. I purchased a pile of Efke and Adox CHS Art films, both in 35mm and 120, 50 and 100-speed offerings. While Efke became a favourite, the CHS films also presenting a whole new look. Sadly, around that same time Fotokemika, the company that was making both Efke and Adox CHS films at the time, folded. No longer able to maintain or repair the machines that had been chugging along since the 1940s and 1950s. Despite that I managed to hold onto my last roll of CHS 100, finally shooting it in 2015 in the Netherlands. Adox took the reigns and took back the CHS line and released in 2013 a new version, CHS 100 II. Using the original film as a base, they painstakingly reproduced the classic dual emulsion in a single layer coating, even doing their best to duplicate the original sensitization. While CHS 100 II is not the original, it is pretty darn close. And I’m happy to be able to finally review this classic film that helped push me deeper down the rabbit hole of Black & White film and Adox products. 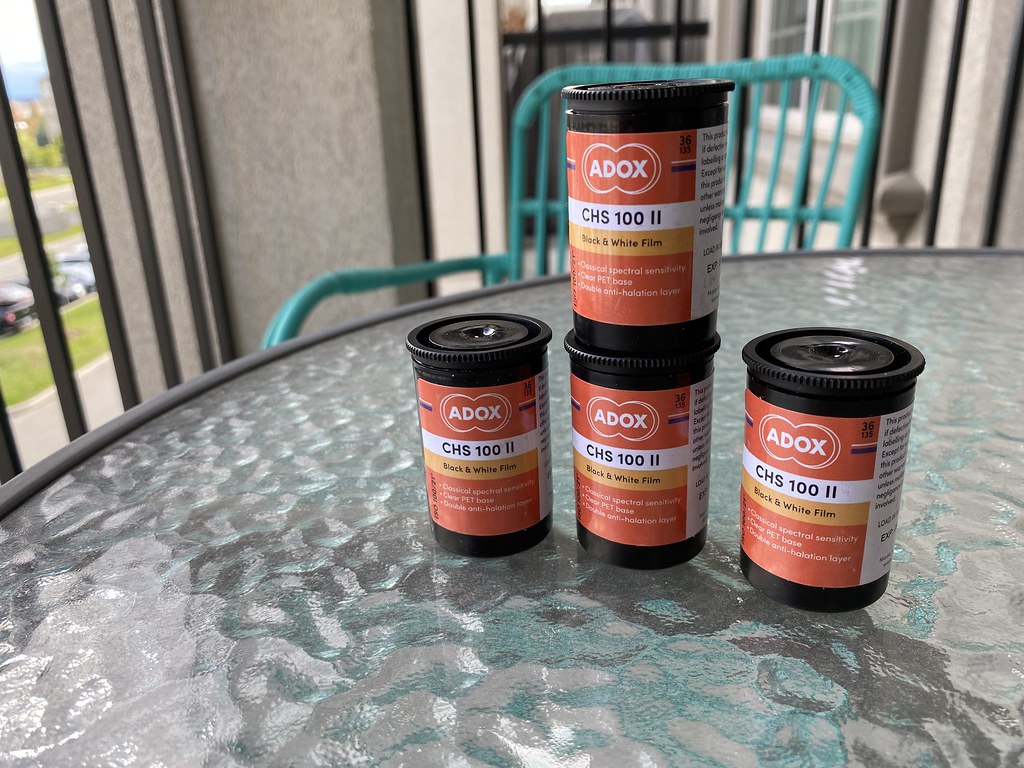 Roll 01 – Kodak D-76
And CHS 100 II comes out swinging for the fences. I knew these were winners when I first pulled the negatives from the development tank. They carried a good density and, more importantly, dried perfectly flat. They also scanned easily in my V700. Quality-wise, they perform exactly how I would expect any film to perform with D-76, good tone and contrast, nothing especially fancy or unique. There’s enough tonal separation to help with sharpness. And there’s also good edge sharpness. The one thing I did notice is that there is more grain in these images than your standard ASA-100 film, and while a bit of a surprise, knowing the linage of CHS 100 II makes it understandable. This is based on a film that first came out in the mid-20th Century, not a modern emulsion with years of tweaking. While D-76 wouldn’t be my first choice here, it will do the job.

Roll 02 – Ilford Ilfotec HC
I went a little off-script for Ilfotec HC; rather than go with a usual dilution of 1+31 or 1+63, I went with 1+39. For those in the Kodak world, that’s Dilution D, a little-used dilution in most cases. It also required a different agitation pattern, constant for the first thirty seconds, then five seconds (two inversions) every following thirty seconds. It certainly kept me on my toes. The first thing I noticed was how thin the negatives appeared. Thankfully there was enough there to scan them well. Overall, I think Ilfotech HC/HC-110 is an excellent choice. The images were a little more contrasty than I would like, but going with a 1+63 dilution will probably work better. That said, the images remain sharp, with excellent tonal separation and edge sharpness. A little bit more in the way of grain, but an excellent grain structure.

Roll 03 – Adox Rodinal
A little rough, a little grainy, but what are you to expect from Rodinal and a film that isn’t fine-grain. However, the results are far better than I was expected. You get more grain than what you might get from another 100-Speed film, but this does help edge sharpness. There is also an increase in contrast which does help with tonal separation, and the tones are excellent across the board with good blacks, whites, and mid-tones. I also noted that the film responds well to a yellow filter with plenty of cutting of the blues, with my skies rendering nearly black in several cases. While not my favourite combination, I certainly feel that going with a 1+50 dilution resulted in far better images than if I had gone with 1+25. I also think that CHS 100 II will respond better to stand-development in Rodinal.

Roll 04 – Adox FX-39 II
I knew these were winning images almost as soon as I pulled the negatives from the tank. The base turned clear; I can see why Adox has CHS 100 II as a good option for reversal processing. When I scanned the negatives, I could see that these were beautiful, almost as if FX-39 was the perfect choice for the film. While there still is grain, it’s far less noticeable than those developed in Kodak D-76. But the grain does add to the edge sharpness, but the real sharpness comes from the tonal separation. While I’m not a practitioner of the zone system, I can say that almost all zones are represented in these images. And it does that without increasing the contrast, which sits at a happy medium.

Final Thoughts
The one thing that I certainly get from CHS 100 II is that old-school flavour that I remember from my earlier experience with Efke 100/Adox CHS 100, which are based on the original Adox formula. The film is rich and contrasty, and you certainly want to make sure that you develop it right. Personally, my favourite results are in Adox FX-39 II, but I’m banking the film will look great in Kodak D-23 or Adox Atomal 49. While the film is a little harder to get in North America, ordering it right from the source is your best bet, and that’s Fotoimpex in Germany. Sure it might take a good month to arrive, but it is well worth the wait. The one thing I’m waiting for is the return of 120 format in the film, but it also looks amazing in 4×5, which was my first experience with the film. You can see an example below developed in Xtol. The one thing that I can see this film being good for is reenactments; if I ever get that WW2 combat photographer impression together, my film choices will certainly be CHS 100 II and Fomapan 400 and plenty of Atomal 49.