While Fuji Velvia was not my first experience with slide film, it is certainly is the one that made me like slide film. First released in 1990, the film became an immediate threat to Kodachrome, especially Kodachrome 25. And unlike Kodachrome, Velvia used the standard E-6 process that could be done in any lab that covered the process. No need to send it to speciality labs, and you could have your slides back the same day from the right lab. The name itself comes from combining Velvet and Media to describe the smooth images produced by the stock. While the original version was discontinued in 2005, Fuji tends to bring back popular brands from the dead. It would only take two years for a replacement to be introduced, using the original code (RVP) but added the film speed 50, creating the new Velvia 50 and RVP50. The two main differences between the original RVP and the re-release RVP50 are the film base and re-engineered materials to make the emulsion. 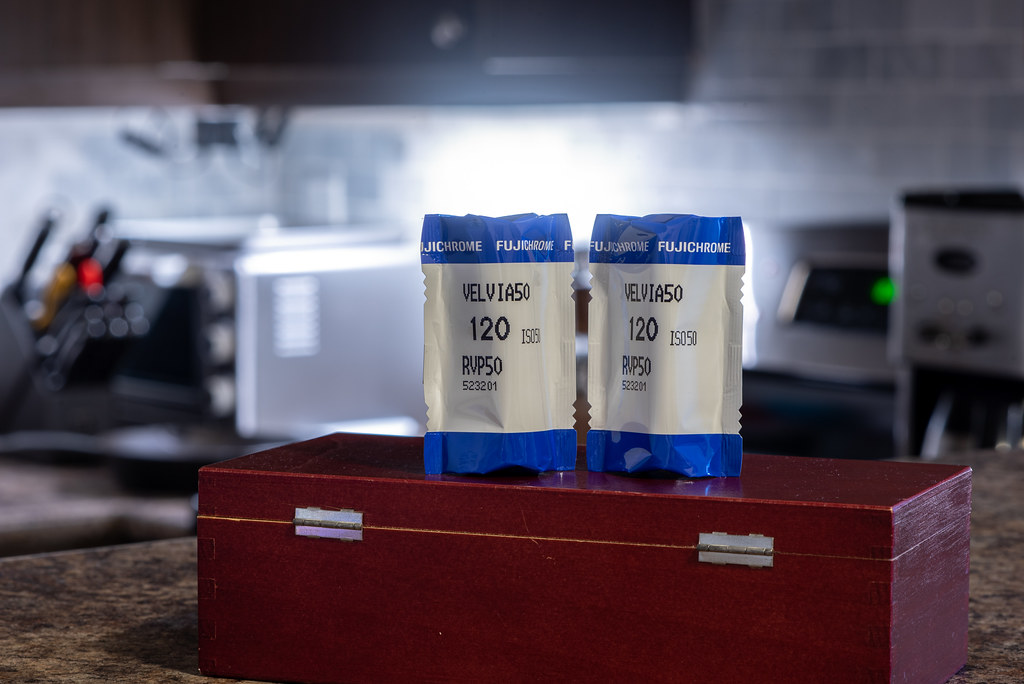 Colour Rendition
The one thing that the original Velvia was known for was to knock your socks off-colour saturation and high contrast. Earning the film the obnoxious nickname Velvita from the so-called ‘cheese’ of the same name. While still retaining a rich colour, the new version of the film has knocked back the contrast and saturation to give a far more natural look and feel to the film. It almost seems light; there’s a hyper-real nature to each image, with each colour saturated with your deep blacks and bright whites added in, as long as you have good lighting conditions outside. I honestly can see the draw of Velvia for landscape photography, especially in the fall or for certain portrait shooting, but you want to make sure the makeup is spot on in that case, as without it, your skin tones are going to look strange. Most of the time, the colours will lean towards your greens with fresh film, and the expired will go more towards magenta.

Image Quality
When it comes to Velvia 50, it certainly has its strong point in the image quality it produces, but it is a fickle film to handle both in the field and in the scanning. As you can see, with the initial set of four images, they are pretty terrible, as in I wasn’t even sure I wanted to share them. But given that this is a review, sometimes it is helpful to show what the film cannot do, which is handle low light conditions. The day I shot these, I probably should not have, dull overcast with very little in the way of sunlight. I ended up showing the lack of latitude and forgiveness of Velvia. But in bright and even light, Velvia performs perfectly; you get incredible sharpness and fine grain. But you do have to expose it perfectly to get the best results and have the best conditions.

Scanning
I had forgotten how much I wouldn’t say I like scanning Velvia. Because of the highly saturated colour tones and fickle nature of slide film, it is the worst film I’ve ever tried to scan. While I did not have a chance to scan using my Nikon Coolscan V ED, my Epson V700 certainly had trouble with the shots taken in Oakville under terrible lighting conditions. And even those shot in sunny conditions with a lot of difference between the highlights and shadows. But by far, the worst process is with colour balancing and levels; Epson scanning software and Adobe Photoshop had a hard time getting the levels and colours balanced automatically. I did my best to do it by hand, but it is not a strong point for me, and trying to find a good online source for colour balance was difficult. Thankfully, the fine-grain helped reduce any JPG artefacts and aberrations in the scanning process.

Overall Impression
The funny thing is that I have a clear memory of both liking and hating Velvia simultaneously; under the right conditions, it is an excellent film but hard to handle. Between the trouble scanning it, narrow latitude and hyper-real colour replication and difficulty in post-processing, I don’t see it as a film that I’ll be using anytime soon. But I wouldn’t say no to a box of 4×5 Velvia 50, especially if offered up for free. But given the cost of the film and the time needed to get it developed (I can develop E-6 myself, but shoot so little slide film I send it off for processing), it isn’t worth my time and effort these days.