In the 1990s, a particular bread of camera was cheaply made, often in mass quantities and questionable quality. While many have been passed off these days as cheap and trash cameras, some achieved a bit of a cult following. One such camera was the Vivitar Ultra-Wide & Slim (VUWS). Vivitar never made the camera itself; instead, it was marketed and sold under the name. And actually, I don’t think Vivitar ever made anything of their own. What set the UWS apart from the other contemporary trashcams of the 1990s; it featured a simple 22mm f/11 ultra-wide lens, something that most well made point-and-shoot and toy cameras of the day didn’t have. Ultimately, production of the UWS ended. It was picked up by another firm, Superheadz, who produced a sub-standard (even compared to the original) copy but added multiple colours to the camera. But earlier this year, the company RETO began production, a far more faithful reproduction of the Ultra-Wide & Slim. I managed to get my hands on a charcoal coloured copy, and here are my initial impressions of the camera. 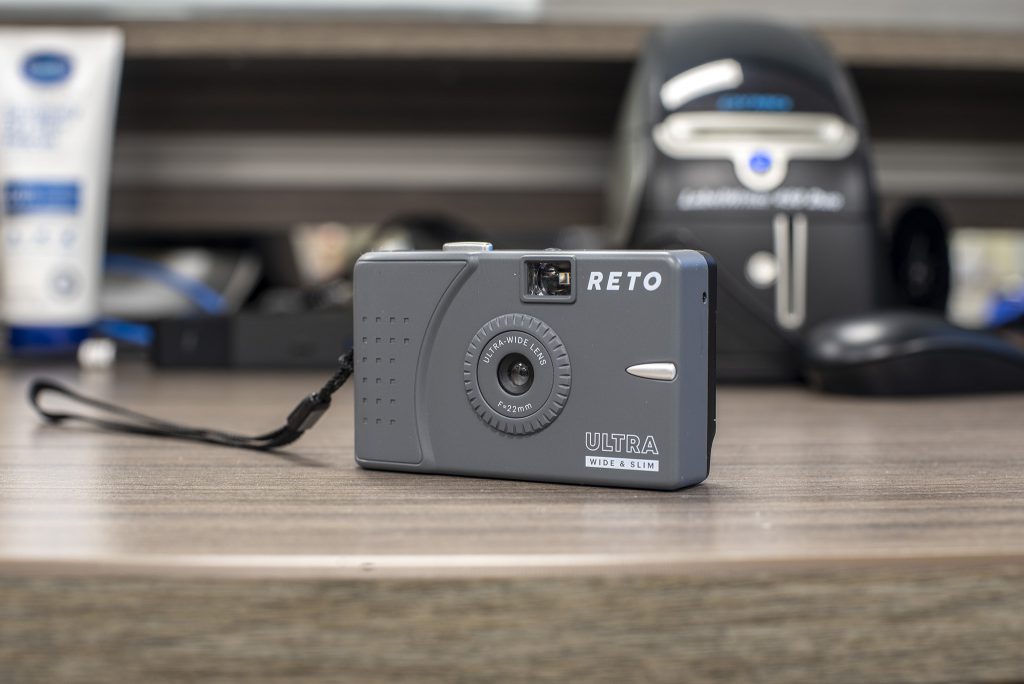 I’ve had a chance to shoot a single roll through the original VUWS, and I can honestly say I must have had a terrible copy because I never got a good shot out of the camera. At least by my standards of that day, I probably had some unrealistic camera expectations. But the camera itself described in a single word is cheap. And I don’t mean that inexpensively. It felt cheap, light, brittle, and of poor build quality. I mean, it makes the Holga look like a well-made machine. Of course, now I have a better idea of what to expect from cameras like the VUWS, and the RUWS certainly holds to the original. The box arrived in felt far too light to have the camera, and I think the packaging and packing materials weighed more. The RETO copy felt the same way, cheap, poor quality, and could break if you looked at it incorrectly. So in every word, exactly like the original. It’s almost as if RETO got their hands on the original moulds and put them back into production. The one thing that sets the RETO apart is the multiple colours but lacks the terrible coating that Superheadz applied to their copies, which got grimy and degrading overuse.

It also seems that the RUWS also fixed the issue that if you shot a 36-Exposure cartridge, it would start to jam up past frame twenty-four; while I didn’t shoot the roll to the end, I did get to frame thirty without any trouble. Overall the camera is as simple as possible; there’s no meter, and everything is fixed and tiny. You will have to watch out that your fingers don’t get in the way of the lens. Pick your film based on the lighting conditions and ones with a decent level of forgiveness, noting that the shutter speed is approximately 1/125″ and the lens has an aperture of f/11. Given that the lens is 22mm, you can have almost everything focused on that much depth of field. While there is a viewfinder, it is there primarily to give you an idea of composition, but most of the time, I ended up shooting straight from the hip. Overall the quality of the lens is surprisingly sharp throughout most of the frame, especially in the middle. But then a lovely fall-off towards the edges and a touch of vignetting in the corners. It certainly has character.

While the RUWS isn’t a camera for those who like control and high-quality images, I’m sure many will say don’t waste film through this piece of garbage. I’ll respond that the camera is fun, a nice departure from my high-quality total control cameras. While it won’t be a daily carry for me, it might show up at a photo walk and would be a good thing for world toy camera day or Lomography day. Plus, it’s different and doesn’t take up extra room. My full video review of the RUWS is due at the end of this year, with the written review scheduled for January 2023!