When it comes to Film Washi, they certainly have gotten their hands on some interesting film stocks. And after enjoying some of their products last year, one of their products I’ve wanted to try. But with any repurposed film stock, you have to wait for the raw materials to become available. Thankfully after watching out on the Film Photography Project’s store I saw them come back in stock thanks to their email newsletter. Type “F” is a special X-Ray film used for mass lung disease diagnoses; according to the Film Washi website, it is truly a unique film that offers, coated without an anti-halation layer, a high diffusion effect beautiful grain. 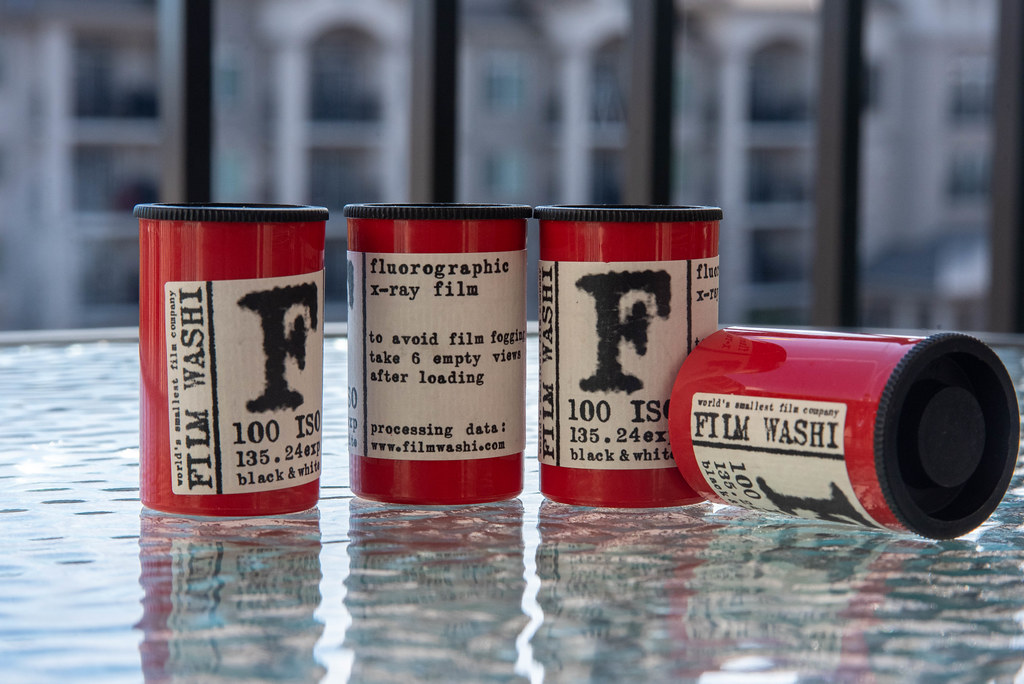 Roll 01 – Ilford ID-11
I didn’t know what to expect from these negatives; they looked decent, a bit dense, but nothing too terrible out of the tank. Silverfast, however, made the initial pre-scan look overcooked. Thankfully once I got the frames set up, things started to look better. There is undoubtedly an ethereal quality to these images, a soft fuzziness around the edges. Almost as if you’re looking through the world with dirty glasses. You do lose your highlights but get excellent shadow details. Probably the one thing that caught my attention is how grainy the film is, not that I’m complaining; we are talking cut down x-ray film here, so a bit of grain is to be expected. But the images have an excellent sharpness about them, which only adds to the film’s overall feel. And for a first roll, I think I’m going to enjoy the film moving forward.

Roll 02 – Ilford Ilfotec HC
After seeing the results, I got with the first roll. I decided to play off my strength and see if I could push the film towards that same ethereal look. Rather than go with the dilution and time on the Washi datasheets, which called for 4.5 minutes in a dilution of 1+15 (Dilution A). I felt that the time was too short and the dilution too strong. Thankfully, Washi tells you an alternative source for times, so I went with a sixteen minute time in 1+63 (Dilution H). Although the film probably would have done better in either the 1+15 or 1+31 dilutions, it would have bumped up the contrast. I am, however, happy with the results I got; you got that same ethereal glow about the images and a certain drop in the visibility of the grain; I did have to dial things back in editing, so maybe drop the development time to fifteen minutes or go with a more substantial dilution.

Roll 03 – Adox Rodinal
I’ll admit I was torn when picking a development using Rodinal. On the one hand, I knew that I would get some increased amount of grain no matter which dilution I went, but I wanted to see a bit more contrast from Washi F. In the end, I went with a tried and listed time, going with a 1+25 dilution for nine minutes. After pulling them from the tank, the negatives looked like the rest, which is a good sign. They are a bit overcooked; thankfully, a bit of work in post-processing did drag a bit of detail back out of those highlights. Some of the times are a little off on the datasheet, and I would go with at least one minute less on all listed times.

Roll 04 – Flic Film Black/White & Green
The joy of running these films sequentially is that I can make adjustments as I go along with developing the rolls. In the case of this last roll, I took my advice and went with one minute left on development. Here I went for the FP4+ times again and used the Flic Film Black/White & Green, which is liquid Xtol, hoping it might tame the film. Sadly it did not, and despite shooting under wildly different lighting conditions, the film came out of the tank looking like every other roll. In fact, despite being developed by four different developers, everything looked the same. There’s the same ethereal look to the images, loss of highlights, tonnes of grain and sharpness.

Final Thoughts
Washi F is not for the faint of heart; it’s a film that has specific tolerances and has very little in the way of forgiveness when outside those tolerances. And that isn’t surprising for me, it is a film with a single purpose, and here I am taking it well outside that purpose. An X-Ray camera does one thing well and does it the same every time. On that side, if you’re into this look, then Washi F will give you a fun film to experiment with ethereal portraits and landscapes and certainly makes you embrace the grain. And no matter what you develop the film in, it will look the same. The one thing I did note with his film is how difficult the handle is. The first thing is that the base is thin, not super light like other Washi films, but thin enough to give my F5 some headaches when loading. The second is handling when loading onto plastic reels, the first roll through bound a little during the process. Thankfully, I kept the film rolling with a bit of luck and a touch of violence. The thin base did allow the film to dry flat, but it did tend to roll upon itself. It also tends to suffer from light piping, so keep the roll inside the canister until you’re ready to use it and load in dim light. The canister recommends shooting six frames, but four seems to do the trick. If you’re looking for Washi F, it can be challenging to obtain as Washi is a small company out of France, thankfully they have a long reach, you can find a complete list of retail partners over on the Film Washi site.