It’s been a long road getting Silberra films; from their initial crowdfunding campaign, delays, communications blackouts, and other released products, I doubt I will ever see any of the 120 films I initially backed. But then I got word that I shouldn’t expect them, and I was offered up an alternative, replacing the rolls of 120 of Pan50 with rolls of 35mm. I’ve wanted to try this film for a while now, so I jumped. And the rolls arrived in a timely fashion; sadly, because there has been almost no stock reaching the wider world, there is not much information online, including processing times. Thankfully, the boxes have a development chart printed on the inside, although it is hard to understand in some cases.

Dear Readers, these images were shot before the illegal, brutal, and devastating invasion of Ukraine ordered by Russian President Vladimir Putin. And while Silberra is a Russian company, I did my due diligence in researching the company and briefly considered removing this review and putting something else in its place. However, after careful communication and research, I found no connection between Silberra and the Russian President. Glory to Ukraine and prayers for the defenders, those affected by the conflict and for peace. 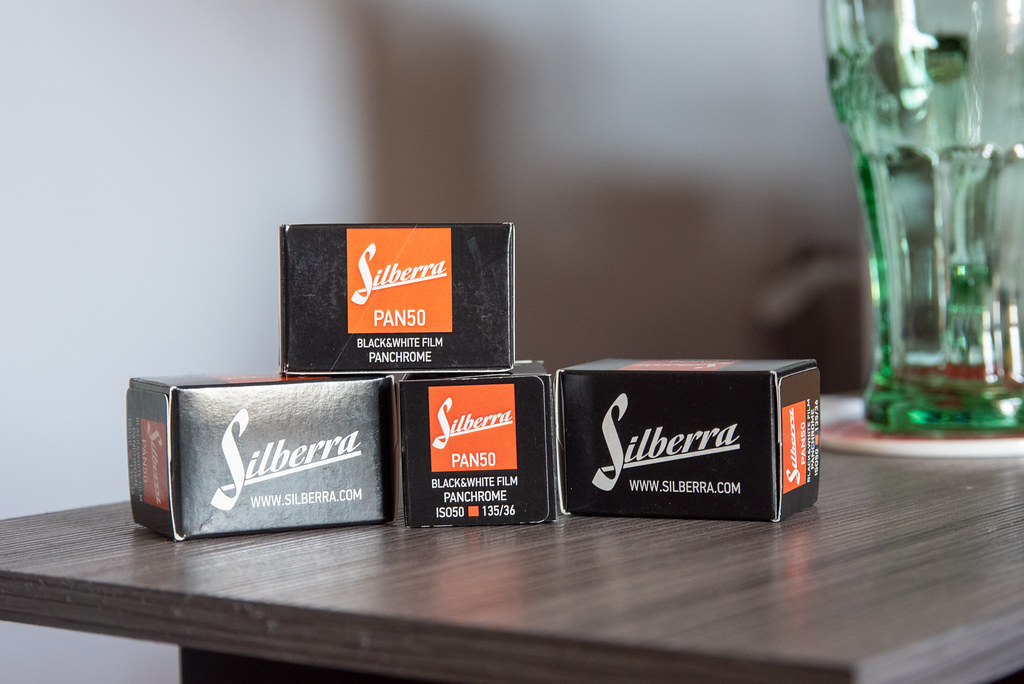 Roll 01 – Ilford ID-11
It’s never a good sign when starting a review with radically different information from online and print sources. Some online sources pointed to a development time of 7.5 minutes at 1+1 dilution, and the information on the box showed only 9 minutes, but no dilution was given. But given that it’s an ASA-50 film, a stock dilution at 9 minutes seemed a little too long and too strong. Taking a look at the development time for Ilford Pan F+ showed the only ID-11 times were for 1+1 at 8.5 minutes. I went with a 1+1 dilution and got good negatives out of the tank. And it didn’t stop here; when I started scanning, my jaw hit the floor. The results were sharp, clean, and surprisingly fine-grained. Not to mention fantastic contrast providing for tonal separation that only added to the sharpness of the results. Honestly, I did not expect these results compared to the Pan 100 and Pan 160.

Roll 02 – Ilford Ilfotec HC
The published times on the box called for 4.5 minutes at 1+31. Now I’m not averse to doing a development time under five minutes. Still, after seeing what a dilute development could do, I wanted to extend the development times and use my goto dilution, 1+63. Especially after seeing the stunning results, I got with ID-11, I did have slightly more overcast conditions the day I shot the second roll. And the negatives looked excellent right from the tank, with good density and clear images. However, in the final product, the first thought is that the contrast has increased, even with using a dilute developer. But don’t look at this as a bad thing; the extra contrast certainly helped make the images look more attractive in the dull lighting conditions. And after levelling things out in Photoshop, things looked far better, and most importantly, the fine grain and sharpness remained. I noticed the loss of shadow details, which is not surprising given this is a repackaged surveillance film. You have two options here; the first is a bit longer in the developer, maybe an additional 30 seconds. The second choice is to over-expose the film by a stop (shoot at ASA-25) and then develop at nine minutes. While Ilfotec HC may not be the best choice for the film, maybe a more dilute mixture will work if that’s all you have. But I would not use a higher dilution than 1+47.

Roll 03 – Adox Rodinal
I stuck to the dilute developer theme and used the published times for a 1+50 dilution for Rodinal. Thankfully, I again had a bright sunny day to work with and lots of snow around, which flooded the region with light. I went with shooting the film at ASA-50 rather than over-expose. And you know, I did not have high hopes for the film, given that Rodinal isn’t known for compensation capabilities and can be reasonably high contrast. However, after pulling the negatives from the tank, I was pleasantly surprised; the negatives looked terrific. And after scanning, I was again happy with the results. There is a bit of uptick compared to ID-11 but slightly less than what I got with Ilfotec HC. The images remain nice and sharp and probably the sharpest results I have obtained with Pan50, but a slight increase in the visible grain. There is some shadow detail loss, but nothing too severe and only in extreme latitudes of lighting conditions. If I did have to use Rodinal again, I would over-expose the film by a stop, shooting the film at ASA-25, then developing typically.

Roll 04 – Ilford Perceptol
While my initial thoughts for Pan50 were to go with Ilford Microphen, after seeing how well the film handled other developers and didn’t have the same issue with visible grain as the other two Pan/Ultima films from Silberra, I decided to go with the developer designed for slower films, Perceptol. I also planned to give the film a one-stop overexposure and then pull the development times to compensate. But I decided to let the times and EI speak for themselves as tested by Silberra. I wasn’t disappointed; the negatives right from the tank were excellent—good density with good tonal separation from my initial observation. And the results also speak for themselves; while having a bit more contrast than the ID-11 roll, you don’t lose as much shadow detail as Ilfotec HC. Perceptol shines because there is hardly any visible grain, but you retain an incredibly sharp image result. While you might go with a bit of an over-exposure, I could see this working well. At, say, ASA-40 or ASA-32, you might be able to pull out more shadow detail without adjusting your development time. Anything a stop or over, you’ll want to pull in development. Perceptol is undoubtedly an excellent choice for Pan50.

Final Thoughts
Of the three original black & white films from Silberra, I wish I had supported the 35mm from the start, especially the Pan50, but they say that hindsight is 20/20, and I’m certainly seeing that now. Pan50 gives consistent results, fine grain, excellent sharpness, and superb contrast. Everything I like in a film, and if this is how the 35mm film performs, I honestly can see the medium format (if it ever sees the light of day) being even better. The polyester base is thin but not too thin, and it is easy to handle in the dark bag and loading onto plastic reels. It drys perfectly flat and scans nicely with only slight adjustments needed in Photoshop when scanned with my Epson V700 using Silverfast 9 SE. And I honestly don’t think you need any contrast filters as there’s an excellent separation between the sky and clouds. And even under duller conditions, the contrast is superb. Is the film’s true speed ASA-50 or closer to ASA-25 or ASA-20? I honestly cannot say for sure. Pan50 is a repackaged film, so the folks at Silberra are probably tweaking it to make it a bit more marketable in today’s world. But of the three films I’ve worked with, Pan50 is undoubtedly my favourite.