This isn’t my first experience with Tasma film, I have shot NK-II in the past and their Type 25L. As a company, Tasma or Тасма has been producing photographic products since 1933. The name is a shortened version of Татарские светочувствительные материалы or Tatar Sensitized Materials, and they have carried that name since 1974. Originally operating under the name Film Factory No. 8, the Kazan-based factory continued operations through the entirety of the Soviet involvement in World War II and earned the Order of the Red Banner of Labor in 1944. Following the collapse of the USSR, the company reorganised as a private firm in 1991 and continues to produce film and other products today. NK-II is a medium-speed, panchromatic b&w film that is part of a large selection of films available from Tasma.

The film used in this review was purchased from the Film Photography Project before the illegal and brutal invasion of Ukraine under the orders of Russian President Putin. While I cannot find any direct ties between the heads of Tasma and President Putin, Tasma does hold contracts with the Russian Ministry of Defence. And their other products are linked to the Russian Oil and Gas Industry. 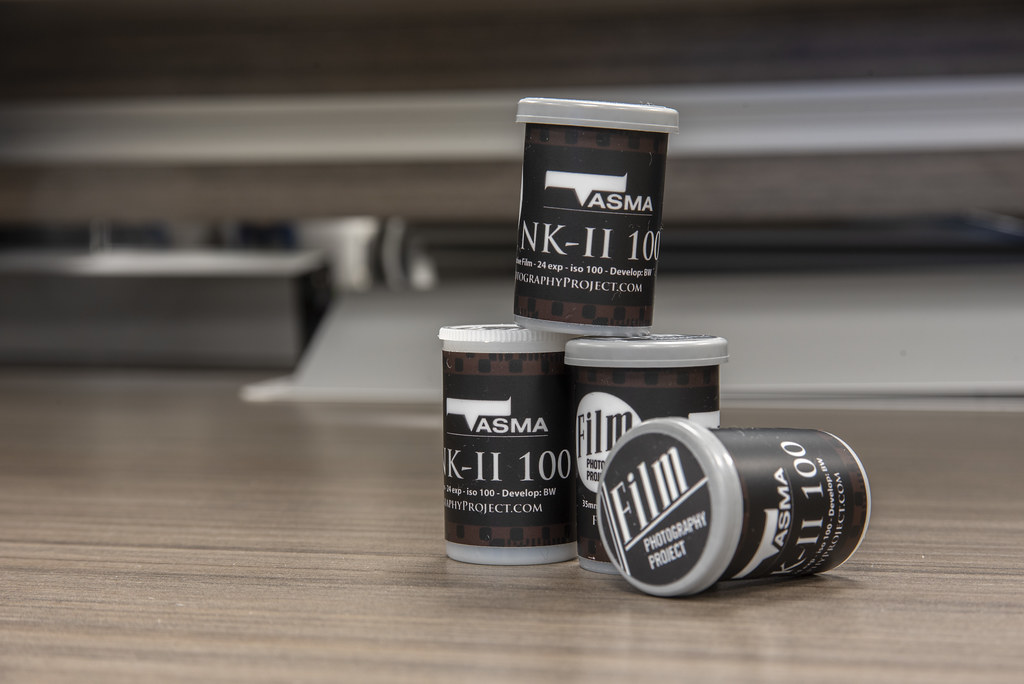 Roll 01 – Ilford ID-11
It’s incredible how different this film can look in a different light. The first time I shot NK-II was under dull overcast conditions; now, under a hard overhead light, the resulting images were rich with a deep chrome contrast. And I certainly like these results better than the first time I shot NK-II. The photos are sharp; there is some noticeable grain, but nothing over the top from similar speed films out of the former Soviet Bloc. The excellent tonal separation also helps the sharpness despite the high-contrast conditions. The one thing I did notice is that the film does have a lack of latitude, maybe a half-stop in either direction.

Roll 02 – Ilford Ilfotec HC
I’m always wary when a film lists a time of ten minutes for a substantial dilution, in this case, 1+31 for Ilfotec HC. A quick check around Flickr did confirm excellent results with the combination. And I did consider running it through a 1+63 mixture for twenty minutes, but even with a rotating base, I honestly didn’t have the stomach for that long of a developing time. And the negatives looked excellent when I pulled them from the tank, only confirming that I had the right time. But once I started scanning these images, I found myself questioning things. There’s a lot of contrast here and a lot of compression of mid-tones in a majority of the photos from this roll. I feel that due to the hard overhead light and lack of filtration. I kept losing shadow detail, but when I had the light right, the images were glorious with a tonne of tonal separation. It comes down to the light and a lack of latitude in the film stock. But I got that same fine-grain and edge sharpness I got with the first roll. These might have looked better with the longer developing time and a weaker dilution or over-exposing the film by a stop.

Roll 03 – Adox Rodinal
If I had shot the initial two rolls on dull grey days, I probably would have second-guessed the choice of Rodinal for the film. But after seeing the results from ID-11 and Ilfotec HC, I decided it would be worth the risk. Despite this, I noted that despite having long developing times for more vital developers, the 1+50 time for Rodinal is a short six minutes. But I again faced a day with hard overhead light, so taking a suggestion from one of the many friends I have in the online film community, I over-exposed the film by one stop at ASA-50, but then developed usually. The negatives looked much better from the developing tank, so I knew the right choice had been made.

Roll 04 – Adox XT-3
Taking lessons from the last roll of film and noticing that I would be high-contrast the day I was out, I again decided to shoot NK-2 at ASA-50 and then develop typically. Sadly, the trick to help cut down the contrast didn’t work like in the past. The negatives were dense coming out of the tank and scanned in a bit over-cooked. I should have pulled it in development (something to remember next time) or shot it at full box speed (ASA-100). Thankfully I quickly dragged out the details from the over-cooked frames. The results were still good, with clean tones, a rich contrast also sharp and fine-grained. Adox XT-3, Xtol, and Bellini EcoFilm are excellent choices for NK-2.

Final Thoughts
Like many eastern bloc films, NK-II is on a polyester base; however, unlike other films from this part of the world like Svema or other Tasma films, NK-II’s base is not paper thin. It was handled well and loaded onto my Patterson reels without too much problem. There is a chance of light piping, but not too bad. Still, it is a good idea to keep them in the dark colour film canister and load the film under subdued light. On the plus side, the film drys perfectly flat. The biggest issue came with scanning; the first roll I ran through my Nikon Coolscan V Et took several tries, not to mention trying different ways of loading the film before the scanner latched on. Still, Nikon Scan 4 handled the negatives well with excellent results. With the nightmare of trying to get a roll scanned, I switched over to my V700 for the final three rolls. One thing you’ll need to do is shoot the film in adjustment to the lighting condition and the developer of choice. In high-contrast light with a high-contrast developer (HC-110/Ilfotec HC and Rodinal), a one-stop over-exposure and normal development would be a good idea. Because of Russian aggression, the sale of Tasma films has been curtailed by Western sellers, out of protest for the Russian invasion or because of the inability to import products from Russian because of the war. My goto choice for purchasing Tasma film is the Film Photography Project; they have the film available in pre-rolled twenty-four exposure rolls which are, at the time of this entry still in stock and available for sale. Would I reshoot NK-2? I think so; out of all the Russian and Soviet films I’ve tried, NK-2 has a lovely contrast, sharpness, and fine grain. Despite its polyester base, it develops quickly, scans easily, and isn’t subject to too much light piping. However, I won’t touch the stuff until the war in Ukraine ends and Putin is deposed. Of course, another option; is Ukrainian manufacturer Astrum’s version, NK-2SH. Is this film from the FPP NK-2SH? I don’t know, but I do know you can purchase it through Downtown Camera.

Further Reading
Don’t just take my word on NK-II; you can check out the reviews by other excellent camera reviewers!
Random Camera Blog – Tasma NK-2 Review