And now for something completely different. Out of all the cameras I’ve reviewed, I can say that this is the first time I’ve reviewed a custom hand-built camera. I mean this camera doesn’t even have a name, so I have for the sake of my record keeping, named it the Francuz Cherry 66. As it is for sale and built by eBay user Francuz01, Cherry for being made from cherry wood and 66 for the fact it shoots 6×6 exposures. Now pinhole and I have a strange relationship, I initially had no desire or time or it and when I did shoot it I disliked the results. However, at this year’s World Wide Pinhole Day Photowalk with the Toronto Film Shooters group, John had this lovely little pinhole camera along that produced amazing results. Well, I decided that having just using adapted cameras just would not cut it, I needed to try out a dedicated pinhole camera. Thanks to John Meadows for loaning this beauty out for review. 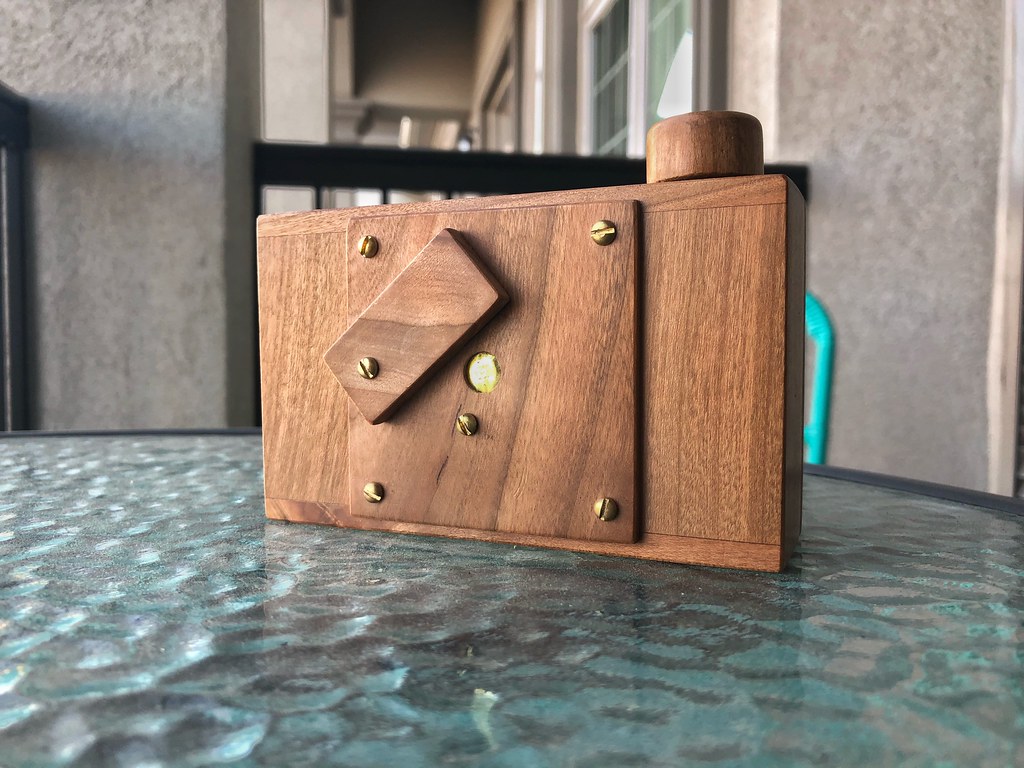 Background
Since this camera has no real history, let me break down pinhole photography and the natural element for you. The pinhole effect is something that occurs both in nature or through human influence. There have been writings on pinhole, or Camera Obscura that date back to 500BCE in both Greek and Chinese civilisations. The oldest known naturally occurring pinhole can be found at the Virpaksha Temple in Hampi, India. Scientist and artist in both ancient and modern history have used the effect to study the physics of light and to help draw natural scenes. The idea of using pinhole for photographic applications started in 1858 with David Brewster. Brewster built on earlier work done by James Ferguson in 1764, and the technique worked. It gained further prominence when flexible film was made available in 1887. William Dickson and Thomas Edison used wax cylinders, commonly used for sound recording, as pinhole cameras. And while most people did not seem to enjoy the process, it was in 1925 that the first exhibit of pinhole photography took place showing the work done by Eugene Estanave. Eugene went on to publish his work in the publication Le Nature. Today pinhole is widely celebrated and used among a niche in the photographic community. From dedicated hand-built cameras to simpler cameras using takeout containers or even toilet paper rolls. Even body-cap adapters that allow even digital cameras to make pinhole images.

Impressions
It is said that first impressions are everything, well the Cherry 66 certainly knows how to hold one’s attention. You can see the maker has taken time to produce a handsome camera. With a smooth matte finish on the cherry wood and brass furniture for the pinhole and fasteners. And the care taken reminds me of the attention to detail that my brother, father and grandfather paid when it came to their woodworking projects. The camera itself has a straightforward control layout, the shutter swings only in a single track, and you know exactly where to stop it as it butts up against on the of screws and you also cannot swing is down past the pinhole itself again thanks to a screw. The film advance is a little stiff and having an arrow to indicate the direction in which to turn would have been a nice touch. But once you get the hang of it, you have no issues remembering. The only thing to note is to loosen the back fasteners a bit to allow for easy film transport. Despite the handmade nature, there is little in the way of light leaks as the back has a light trap and the film advance a rubber washer to ensure a seal.

Experiences
Having never used this camera before I found it simple to operate as most pinhole cameras are. It’s super light, but you do need some a tripod, but you can even just set it down on a surface for a different look. The shutter, as mentioned before, is a simple swing up and down to expose the pinhole. Just make sure to swing it up to the stopping point, or you’ll interfere with the shot. I also made sure to bring a light meter along to help with exposure times and an app to assist with reciprocity times because all your exposures are going to be long. To avoid binding the film to loosen off the back panel and it will advance fine and don’t worry about light leaks. Now the camera using the simple hole method to allow you to use the numbers of the backing paper, but there is no red window. So don’t load up 220 or 35mm film without blocking the hole first. Essentially if you know how to operate a box camera, you can run the Cherry 66. Just watch out for fat rolls, the two I shot both ended up fat. I just left them inside the camera and loaded them onto the developing reel right out of the camera.

Optics
Being a pinhole camera, there are no optics in the Cherry 66 at all, not a single piece of glass. However, that doesn’t mean the camera takes a mean image; it’s just unique. The pinhole is rated at f/150 and gives the focal length of approximately 30mm. Which on 6×6 is super wide, think on the Arsat 30mm f/3.5 or the Carl Zeiss Distagon 30mm f/3.5, both of these lens are considered fish-eye lenses. But in this case, because it’s a pinhole, your straight lines remain straight. Yes, you will see distortion when shooting subjects close up. But for someone who is a bit of a wide-angle junky the pinhole is perfect! Everything seems a bit soft around the edges, but hey when you’re shooting without glass, it’s bound to happen. Besides I like the flare that you can get with it also.

Lowdown
Well, I think that did it, I’m a fan of pinhole and am even thinking of picking up one of these cameras for myself. And considering that the camera is made here in Canada and priced reasonably for the quality of the final product, it is certainly worth the moderate price tag. Now pinhole photography is not for everyone, but even the most hardcore photographer who is concerned about sharpness needs to take a bit of a break. I enjoy the quality I get from my cameras and the lenses I have for them. But then again, I also enjoy working with a Debonair, Holga, Polaroid, and other alternative cameras. So yes, I’m a pinhole believer.