No strangers on this bridge, Lomography Potsdam 100 is the second film released in their Kino series of films. Potsdam 100 is ORWO UN54 a film that I have shot a lot with for the past several years. Compared to N74, UN54 is super sharp, fine-grained and has a fantastic tonality and one I have only developed in a limited number of developers, so I’m looking forward to trying it out in different developers. Designed as Eastern Europe version of Kodak Plus-X and it certainly shows. What struck me is that the film is marked as Lomography Potsdam in the rebate area, which means that they are actively engaging Filmotech/ORWO to manufacture the stuff new which explains how they can get the film in both 35mm and 120, which I will be shooting both during this review. This is in contrast to the Berlin 400, which had factory markings in the rebate, but probably future rolls will be Lomography branded as shown by the fact they are now taking pre-orders for Berlin 400 in medium format. 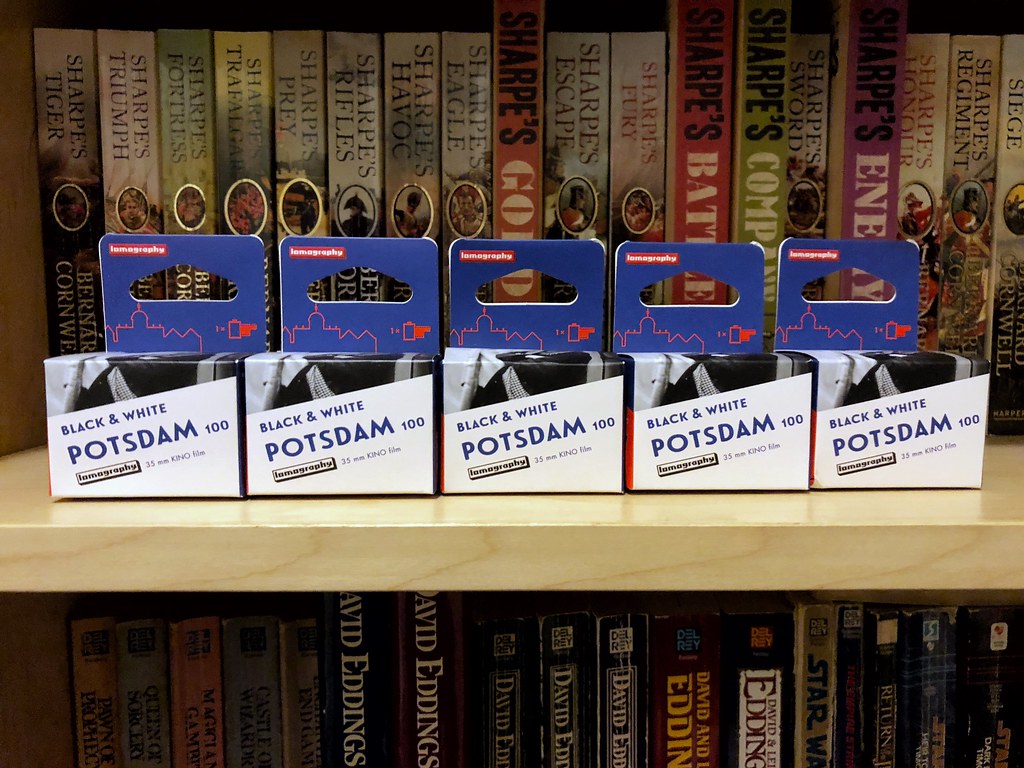 Roll 01 – Kodak D-76
I have to say, after pulling the negatives out of the tank, I stood impressed. Now I have had experience with ORWO UN54 in the past, but only with HC-110 and PMK Pyro, so I already knew something of what to expect. But these images met and even exceeded these expectations. That said, there is a certain cinematic quality to these images, but a rich tonality and some amazing contrast although higher than I expected at 1+1 dilution. Not to mention these are sharp images with a wonderfully fine grain as well. I can’t wait to see what other surprises the film has in store!

Roll 02 – Kodak HC-110
The first time I used HC-110 and UN54/Potsdam 100 I didn’t look properly and used a Dilution A and ruined the film, but I soon realised my mistake and the second roll I ran at Dilution H. All I can say is that the results are smooth. The tones, the contrast, it’s all there. HC-110 became my go-to for developing this film, and the results they speak for themselves. The images also carry grain, but no surprise there, but in this case, the grain is most pleasing and lends to the sharpness of the image overall.

Roll 03 – Cinestill D96 (Kodak D-96)
What better way to show off what a motion picture film can do than to develop it in a proper motion picture film developer. Kodak D-96 (repackaged as Cinestill D96) is specifically designed for developing these films, and I can see why. There’s a richness here, deep contrast with full blacks and clean whites. The tones present a level of dimensionality that I have not seen in any other developer yet. It also helps that there are fine grain and sharpness, now the fine grain is probably helped by the fact that I’m shooting this in medium format, but I’m sure I’ll get similar results in 35mm.

Roll 04 – Pyrocat-HD
As much as I liked the film in D96, I have to say my favourite is Pyrocat-HD. As a developer, the stuff is a magic bullet in many cases. And here we see the best of all sides of what Potsdam can produce. The images have that brightness I’ve come to expect from Pyro developed films. It tames the contrast, yet maintains a happy middle with a richness with both shadow and highlight detail. Not to mention razor-sharp images combined with a fine grain (though that might have something to do with shooting on Medium Format). Overall I am thrilled with these results and almost wish I had started using Pyrocat-HD with the UN54+ earlier!

Final Thoughts
It doesn’t matter where you get this film, Lomography is helping bring a film that was once a little more difficult to get here in North America to a wider market. And the best part is that they’re contracting the Filmotech folk to make it fresh, factory spool it and introducing it in medium format. And unlike the first run of the Berlin 400, the Potsdam negatives are Lomography branded. Overall out of all the Cinema films I’ve shot, UN54+/Potsdam 100 remains my favourite. It’s rich, fine-grained, responds well to many different developers. Personally, my favourites include D-96 (now available from Cinestill) and Pyrocat-HD. And I do intend on trying 35mm with these two developers and some Rodinal as well, which I left out of this review. You can purchase Potsdam directly from Lomography or the Film Photography Project. You can also pick up UN54+ from the FPP directly as their BW100 fresh rolled.