There’s something strangely satisfying about a Nikkormat. These are beefy, mechanical cameras, that screams 1960s camera technology. While these are older machines they are close to bulletproof and are among one of the more popular SLRs released by Nikon at the time, maybe even more popular than the Nikon F. These were Nikon’s answer to the growing hobbyist market that at the time was dominated by the likes of Canon, Minolta, and Pentax. The FTn is not my first experience with the Nikkormat, that would be my lacklustre experience with the FT3. But I didn’t let that sour my view of the Nikkormat line, and I would go so far as to say the FTn is a far nicer camera to work with than the FT3 and one that I certainly will keep an eye out for. But for now, thanks to James Lee for loaning out the FTn for this review. 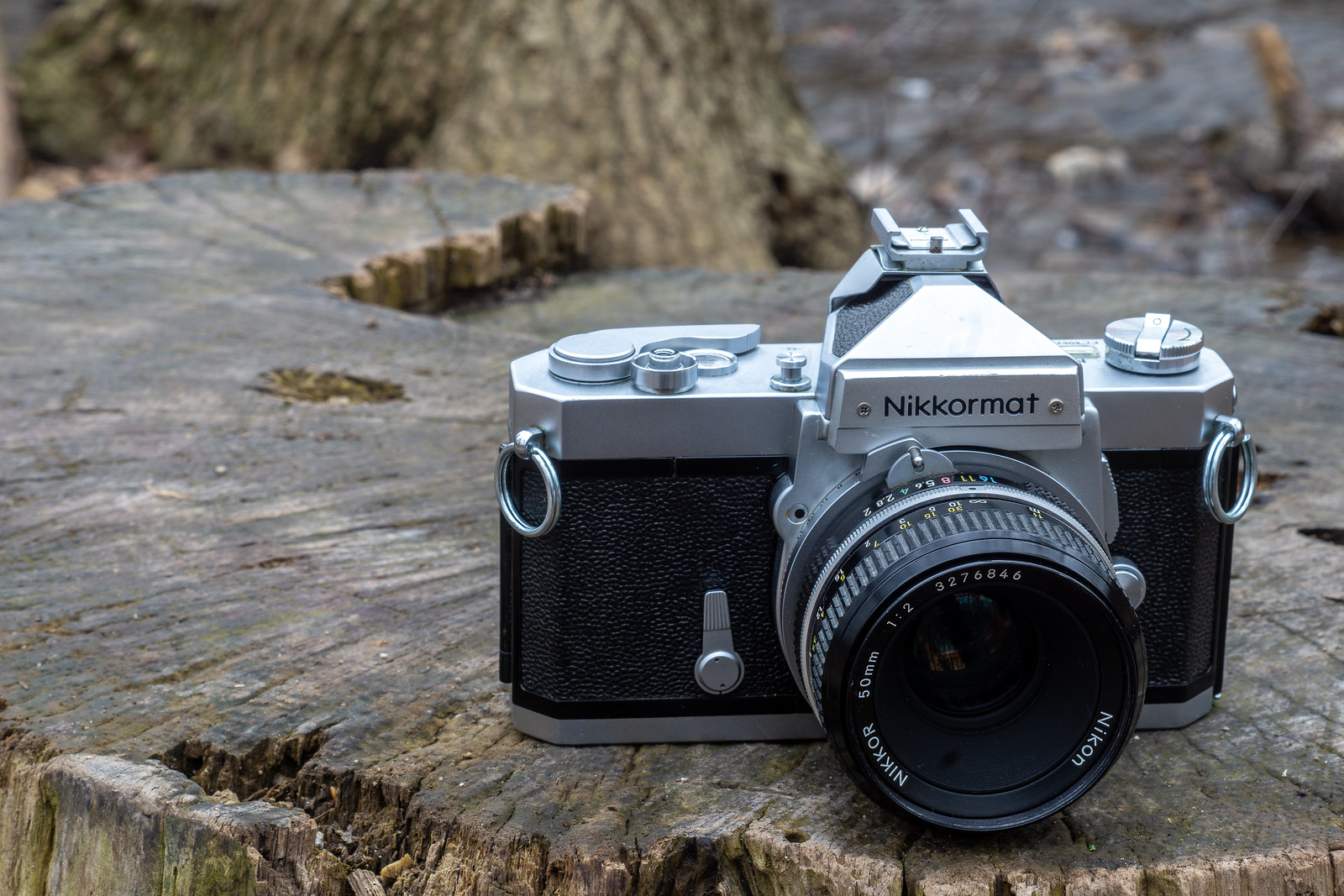 Background
Nikon’s history with the mid-range market had been up until the 1960s had been a string of failures, namely the Nikkorex line of cameras that suffered from quality control and manufacture issues. Other camera companies, namely Canon dominated the hobbyist market with a string of five solid performing cameras. Rather than try and do something different Nikon aimed to leverage their strength in creating a mid-level camera and managed to knock it out of the park. Nikon played to their strengths gained in industrial design and manufacture of the steller professional Nikon F and in 1965 released the Nikkormat FT and Nikkormat FS. The Nikkormat allowed hobbyists to get their hands on a well designed and quality camera that allowed full use of the now extensive catalogue of Nikon lenses. The FT even featured a full match-needle metering system based on the Photomic T meter for the F, the FS would have the same design but lack both a meter and mirror lockup. The FT proved a popular camera among both amateurs and professionals alike. In 1967 Nikon released an updated version, the FTn which kept the same chassis but offered some improved specifications. The biggest change was an upgraded meter, swapping it out for a centre-weighted meter using the standard 60/40 pattern that would become a standard for Nikon into the 21st-Century. They also improved mount to allow lenses with apertures between f/1.2 and f/32 rather than f/1.7 and f/22 with the FT. The FTn proved even more popular, bridging the gap between the F and F2. While mostly unchanged for it’s near ten-year run, the FTn received a minor update in 1970 with a redesigned mirror box that eliminated the Nikkormat rattle that plagued the early models. In 1975 Nikon released the Nikkormat FT2, basically unchanged from the FTn with only the battery system updated to take the modern silver oxide cell rather than mercury. The final model, the FT3 would add Aperture Indexing but be short-lived. By the end of the decade, even the Nikkormat name vanished, replaced by the Nikon FM (a successor to the FT/FTn/FT2/FT3) and the Nikon FE (a successor to the Nikkormat EL/EL2).

Impressions
The Nikkormat FTn is a tank in every sense of the word, if the camera could it would easily mount a 105mm canon without any trouble. There’s a certainly blunt arrogance to the camera, there’s no finesse, there’s just raw image creation. Everything about the camera is about industrial design. If you’re looking for a light-weight camera, look away. But if you’re looking for something reliable, then the FTn is certainly a camera for you. And to be perfectly honest, I’d take then FTn over a Nikon F. The camera is a beast, it’s heavy, you will certainly need a quality strap and you’d be best to run it with a carbine style cross-chest strap to support the weight. If you’ve never worked with a Nikkormat before then the layout will be a bit strange, but if you’re familiar with either the Olympus OM system or having using a Nikkormat before then you’ll figure it out. The number one difference between a Nikon and the Nikkormat is the location of the shutter speed dial which is located on the lens mount rather than the top plate. Something that would become a common feature on the Olympus OM series. The FTn has no indication of any sort of ergonomics save the cut off corners of the camera body. Yet there is a certain elegance to the whole thing, with the all-metal construction. Surprisingly the areas that require user-interface are smooth and easy to operate from the shutter speed dial to the film advance lever.

Experiences
There is a certain brutal satisfaction working with the FTn. Not so much the same blunt instrument as a Kiev-19 but there is a little bit of that, softened by a certain finesse. It is a no-nonsense camera get in, get the photo, get out. Everything about the camera is centered on that task and it does it so well. In fact, I would say that the Nikkormat is an easier camera to use for your first 35mm camera than a Nikon F. The film back is your traditional hinged back and I like the fact that there is a separate latch rather than the traditional lift of the film rewind knob. Loading film is easy enough. If you’re not used to the shutter speed dial is around the lens mount that might be a bit of a sticking point, but I’ve come to accept it (and the Olympus OM-System). The film advance is wonderfully short, allowing for a quick shooting if you so desire, and it uses the typical partial out position to power on the meter. The meter is your typical match needle system, which I do carry a soft spot, plus having the meter on the top plate as well is a nice touch. The meter is the classic 60/40 centre weighted, sadly on this example the meter is not working due to the dead battery. While I ran with the Gossen Lunasix F and Sunny-16 all mechanical remember. But a Revini Labs meter would be the perfect addition to the camera. Rewinding is just as easy.

Optics
The Nikkormat achieved it’s high standing among photographers because of the optics because they allowed photographers access to a wide range of amazing Nikon lenses that worked flawlessly with the camera bodies. Of course, these days there are a lot more lenses available than there was back when the FTn was new. You do need a lens that is manual focus and has a coupling claw to work with the camera and get the meter up and running (if your camera has a functioning meter). That basically allows you to use modern AI and AI-S lenses (just not the Series E lenses as they lack the claw), but if you want a true old school experience grab yourself some Pre-AI glass, you won’t be sorry. One solid suggestion either in AI or Pre-AI is the Nikkor 50mm f/2, that’s the lens I used for this review (the AI version) but having used the Auto Nikkor-H 50mm 1:2 in a past review both lenses are excellent performers. Not only that but you save a tonne of money with the pre-AI glass and it works perfectly without or without a functioning meter.

Lowdown
If you don’t want to pay to play with the Nikon pro line of SLRs and want a camera that just works, then the Nikkormat FTn or any Nikkormat camera will work. You don’t need a battery (it does take mercury cells) because that only drives the meter, everything else about the camera is mechanical. And the cameras are built like tanks, so they will keep ticking long after you’re gone. If you are looking at getting one, get it, if you don’t mind an older model and don’t care about the battery or the meter, then hop on the FTn. The FTn runs between 40-100 dollars, honestly, unless it comes with a host of lenses don’t spend any more than that. If the meter and battery are important, look at the FT2, it is basically the same as the FTn just uses a modern meter. The FT2 will run between 50-150 dollars. The rare duck is the FT3, but I already did a whole review on that camera.