When it comes to Polaroid cameras, I have a love-hate relationship with them. I often find I don’t gel well with these instant wonders, and the cost of the film remains fairly steep. And these days almost all of the old-school Polaroid cameras are starting to get long in the tooth. Sure the Polaroid One is a great option and made in this century, but there are far more of the older cameras around than, the newer ones. This is where the Spirit enters, it is one of the first of the new Type-600 Polaroid cameras released in the early 1980s and is a bit of a strange hybrid with a little bit of the old style and a touch of something new, the clamshell design. Remove the clamshell, and you almost have a new version of the iconic OneStep, there’s even the Polaroid rainbow branding. Thankfully mine still works, but certainly won’t be among the cameras that I keep after this review. And while I’ve reviewed a lot of Polaroid cameras, it’s always nice to review the original. Thanks to Knox Presbyterian Church in Milton for donating the Polaroid Spirit for a review! 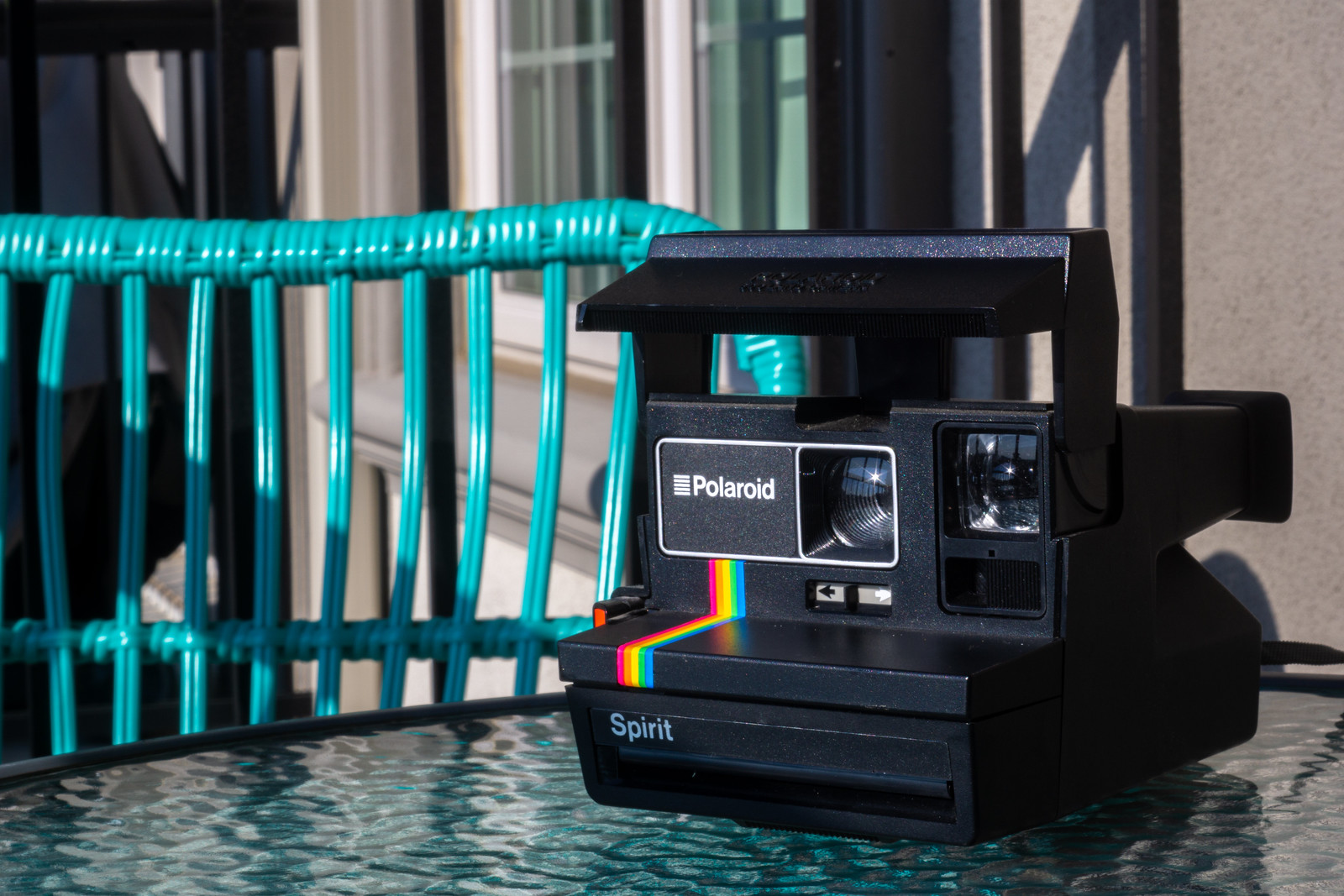 Background
All Polaroid cameras trace itself back to 1948 and the release of the Polaroid Land Camera Model 95. These first cameras used an instant film that came in a roll and used a negative and chemical transfer onto a print positive. The cameras were big, bulky folders with little in the way of automation. Polaroid further refined the process in 1963 with the release of the second generation of their instant cameras, the Automatic Land Camera. These Auto-Lands used a smaller pack film or Type-100 which included both black & white and colour film types. And while they operated on the same basic principle as the earlier film, the ease of loading and popularity launched a huge variety of cameras from top of the line manual cameras to rigid bodied plastic cameras with everything automated. The one problem the Roll Film and Type-100 pack film are that it not only generated a lot of waste as you would toss the negative (except in some cases) and there remained the chance of getting that chemical spread all over your hands. To address this, Polaroid began working on a film that came in one single package, or integral film. In 1972 they released SX-70 that required nothing more than loading the pack into the camera, shoot, and then wait ten minutes for the picture to develop in daylight. The first SX-70 camera is an engineering icon, a folding SLR, but a costly camera. So in 1977, they released an inexpensive plastic point-and-shoot version, the Model 1000 or OneStep. The OneStep offered up a rigid all-plastic body, auto-exposure, fixed focus, and no other skill needed than to press a big red button. It also introduced the iconic Polaroid rainbow racing stripe. The OneStep launched Polaroid into popularity not just among consumers, but serious photographers, Walker Evans and pop artist Andy Warhol latched onto the Polaroid format. In 1982, Polaroid introduced the next generation of integral film, Type-600, rated at ASA-640 it clocked in at being four times faster than the original SX-70 and could developer in a shorter time period. When it came to cameras, the first camera to see a release that accepted the new film is the Spirit. Based on the OneStep, a simple plastic body, similar style complete with the rainbow racing strip. But the camera introduced the idea of the clamshell design, the squared-off features and the side-mounted shutter release. The original Spirit would not last long, replaced by the Spirit 600 in the mid-1980s that added a built-in flash. Although the design legacy would live on well into the late 1990s with a far smoother look as the years progressed. Eventually, the Type-600 would switch to a more Spectra inspired design with the final models.

Impressions
When it comes down to it, the Polaroid Spirit is a modernised version of the SX-70 OneStep, the iconic Polaroid camera. However, it does carry a few design updates that might be recognisable with later model Type-600 cameras. The body shape is that same fixed plastic box, but the lens is now recessed, and things have been squared off a little more. There are, however, two notable additions that the OG OneStep does not include. The first is the clamshell; this acts as both an on/off switch for the camera and a way to protect the lens. The second is the moving of the shutter release to the side of the camera near the film ejection port. One notable item that is not included is a built-in electronic flash; you will need to use either an original flash bar or a MiNT flash accessory; this fits into the port on the clamshell. But the most important part is that the iconic rainbow racing strip has been retained and despite having that boxy 1980s look to the camera, it’s a sleek design. And many of these design elements carried on into the rest of the first generation Type-600 cameras and even into the later clamshell designs.

Experiences
Having shot similar Polaroid cameras in the past, working with the Spirit is no different from those cameras. A well-balanced camera in hand and doesn’t take up too much room in a camera bag. Although far boxier than the Polaroid One600, far smaller than the ones with an integrated flash and the smoother late-90s autofocus models. Loading the film is perhaps the most difficult step in using the camera, it takes a bit more effort than other Type-600 cameras I’ve used, you need to stand the camera on end and apply a bit more pressure than I’m comfortable with. Could be the newer film packs or just stiff contacts inside the camera body. The viewfinder is big and bright, although doesn’t have any guidelines but it pretty close to what the lens sees so composing your shots is an easy task. Out in the field, the camera operates automatically, all you need to do is press the button, and the camera does the rest with a satisfying click, clunk, and whir. And the placement of the shutter is completely natural when holding the camera, make sure to hold that camera steady, and there’s no feedback on what shutter speed you’re using so in some cases you can get a bit of camera shake if you’re not careful. The final step is to inspect the rollers after each pack of film and clean them if needed to ensure good clean operation for the next pack of film you shoot with the camera.

Optics
One of the weaknesses of most Polaroids that fall into the cheap-and-cheerful category is that they lack any real optical power. As my mother-in-law said upon seeing the shots included here, they look ‘old’. But that can also be part of the charm of these cameras, or how they’re supposed to look my wife gladly added. As lenses go the 116mm single-element plastic is not as bad as it could be, it’s the proper size for an image with excellent coverage and no sign of falloff at the edges thanks to the fixed f/11 aperture. It also helps make sure there’s a decent depth of field as the camera’s lens is a fixed focus. And yes, it does have a soft old-school look about them and does a decent job on both colour and black & white films. There are better lenses out there for Polaroid cameras. Still, you have to remember the Spirit is their first Type-600 camera and is loosely based on the OneStep and is built more for affordability then quality. At least you can count on these lenses to give you that soft Polaroid look everyone knows and most people love.

Lowdown
One of the more interesting things about this camera is the serial number; it looks like it’s among some of the first Spirit’s made with a serial of 00041. I only note this because the excellent condition of the camera and the rollers, seriously the cleanest Polaroid camera I’ve ever come across, and I have no idea how long it had been stashed away in a cupboard at my church. While Polaroid cameras especially the plastic filmtastic ones aren’t for everyone, I’m slowly coming around to working with the format and intend on participating in Polaroid Week next year (excellent fodder for the blog and the YouTube channel). Will I use the Spirit, maybe, but I’m more likely to work with the Polaroid One600. Either way, the Spirit is an excellent option for those who don’t like the idea of a flash and want that classic look with the faster film option. Surprisingly these can be had for a far lower price than I expected, with most ranging from 40-90$ on the used market. But like any camera this age, it might be best to spend more and get one that is refurbished. And if you are buying from an online site, put together a test pack using a working cartridge, a couple of exposed frames, and a darkslide. The real cost of working with Polaroid is the film, it has never been an inexpensive medium, and these days the prices have not gone down. And I cannot stress enough buying fresh instant film, this isn’t your average film stock, and a lot can go wrong with expired packs. And while I may end up giving the Spirit away, it’s certainly a camera that I enjoyed shooting.

Further Reading
Don’t just take my word on the Spirit. You can check out the reviews by other awesome camera reviewers!
Retrospekt – Polaroid Spirit Review